I now recently adopted an older African grey Parrot with a difficult history. 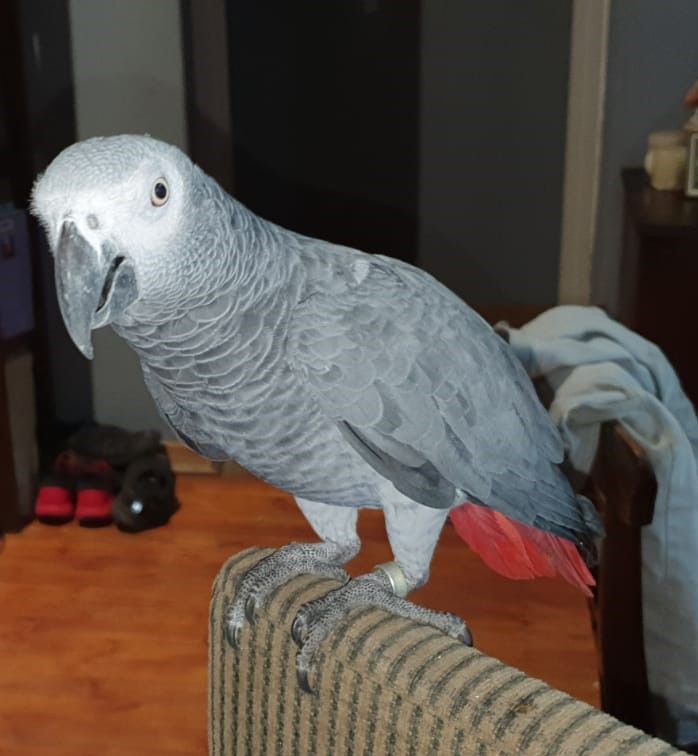 He was cage bound for the first 17 years of his life, not sure he got taken out much. My stepfather got him and tried breeding with him to no avail for about 6 years, female just laid unfertilized eggs. He was then benched and blamed and then put in a cage in the house. When my stepfather first got him I was still staying in the house with them and the bird liked me already then, fast forward 6-7 years when I went to visit my parents I saw they had him in the house, I took a chance and he immediately remembered me and allowed me to handle him.

He had strong hormonal problems in the beginning and after reading online I saw that you need to ignore him and or put him back in the cage when that happens. I did so and he stopped hanging his wings for me and now only occasionally regurgitates his food to me, if he doesn't stop, I put him back in his cage.

He sees me as his mate and tries to defend me by attacking anyone that comes too close randomly. He will jump on my mother as she walks past just to go bite her, then its very difficult to get him off as he holds on to her clothes with his claws very strongly and I have to pry off one toe at a time.

My stepfather says he has never flown before when he was outside in the bigger breeding cage. With me, he rather climbs down the chair instead of jumping and flying off. The few times he has flown in the house was out of sudden fright or something and he always flew downwards into a crash landing. Today I managed to cut his nails for the first time and it went much easier than I thought, he just wants to play with the nail clippers the whole time. Today for the first time he flew about 30 Centimeters (11.8 Inches) from the chair in the kitchen where I put him onto my shoulder.

I haven't taken him home yet, I'm going back home at the end of the month then he is coming with me. I built a cage for him specially that can disassemble into panels that can fit in my car, so when I go visit the family he comes with me,

I just need some advice on the flying part, I don't want to clip his wings, just feels wrong to me, he needs to be able to fly from one spot to another in the house if and when needed and or if there's a danger of if he falls, I can take that away from him. I just need advice on the flying part, my stepfather thinks he will never be able to fly properly as his wing muscles haven't developed properly as he was cage bound his whole life before?

Welcome, welcome! Thank you so much for giving your bird a loving home!

thabk you for rescuing such a beatiful bird!

Hello and welcome!
Wing clipping can be quite the touchy topic!

Kudos for adopting a grey with challenging history. You've been chosen albeit for reasons of hormonal attraction, yet that is a gateway to future success. You'll find sage advice within this thread: https://www.parrotforums.com/threads/cag-101.59366/

Seems this bird is capable of rudimentary flight, so carefully consider whether to clip wings. Plenty of exercise and psychological benefits accrue from such freedoms provided you strive to ensure safety. One technique safeguarding against injury is to literally walk him through each room, presenting every obstacle, mirror, potentially dangerous object face-to-face. Sort of "mapping" the territory!
You must log in or register to reply here.

Hello from a new Parrot Owner!

O
Flapping out of nowhere