A scalped budgie and a baby Brotogeris parakeet ...what a full day!

Sometimes things can take years to happen again, but it is always puzzling when some of them do all at the same time!

Today all that happened at once!

It was a simple morning going to the store with my girlfriend to buy more bird food. She has an amazing talking budgie that I might introduce in another thread. When we arrived at the store we were shocked to meet a female budgie heavily wounded in the head. She was separated from other budgies (possibly to avoid more damage) but put into a cage full of sharp beaked canaries. She was still being bullied there. My girlfriend and I are both soft hearted for animals in need and I could see in her eyes that we would take that budgie home. We had no plans to increase our flock, but..... how could someone make a blind eye to her.

Pictures were too graphic, I´ve just removed them.

Well, we brought her home and treated his wounds plus gave some antibiotics. We found out that she has a punctured wing too. At first she barely opened her eyes and had not eat for hours. Then we put her close to our other budgies cage and she just lighten up. She showed interest in the other birds, ate, explored the cage....I hope she can overcome this. She already showed she has the will.

Early in the afternoon, we looked at the window at what seemed to be a Brotogeris parakeet fly falling from a building and tangling in a small tree almost in the ground level. We went down and the poor parakeet was just a baby in his very first flight. He got lost from its parents and was unable to develop a full flight up. We caught it hoping to give him rest, water and to free it later. Late in the afternoon the poor baby was still not in conditions to fly up. I was able to offer him food when I was feeding the other house baby (the palm tanager rescued from the rainstorm). The Brotogeris showed interest and I prepared proper baby parrot food for it. The most amazing thing happened!! Even if the Brotogeris baby did not know any of us before today, it was open to take food from my fingers!!! 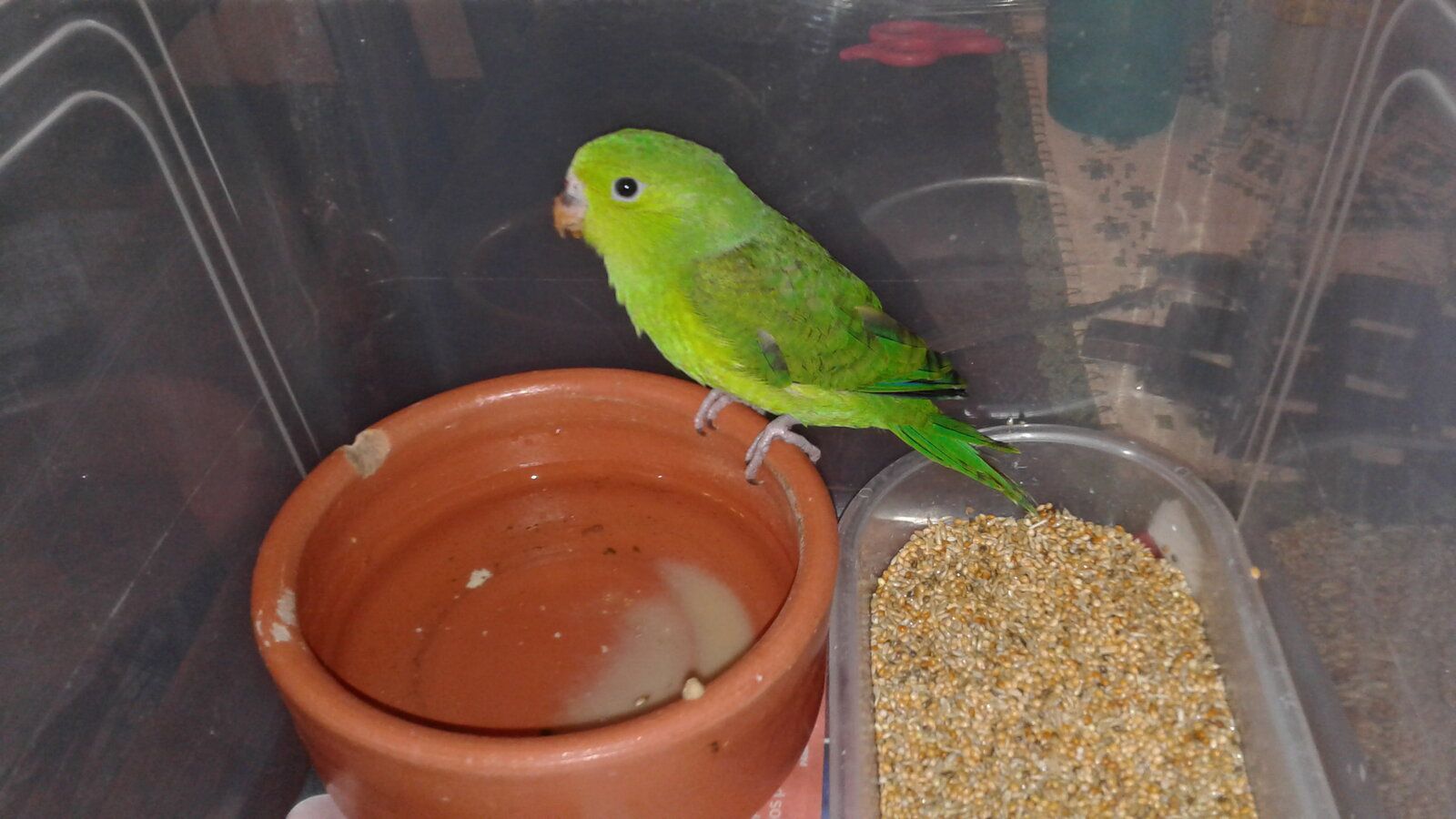 What an incredible day!

Bless you and your girlfriend for the little lives you saved today. That poor budgie broke my heart and I wouldn't have been able to leave her behind either. What a relief she must feel to be safe from being attacked for the first time in who knows how long!
The baby is so precious and I'm so glad he was eating for you. Please keep us updated on them.

Oh Kitekeeper thank heavens you were able to be there for these two sweet little souls! I dread to think what fate would have befallen them if not for you. Wishing them both a full and speedy recovery - certainly they could not be in better or more caring hands than yours

What a day ,thanks for saving them.
OP

I am also sure all of you would have done the same!

I am pleased to announce that the Brotogeris baby was reunited with its family this morning. Early in the morning it seemed to have recovered all its strength, trying to avoid me with energy. I made a flight test indoors to see if it could fly upwards and all went well. Then I tried to feed the baby, but s/he ate very little. So I´ve put it in my window which is close to the Brotogeris flock flight route and the baby chose to stay put and in silence for nearly 20 minutes. At some point one of its parents approached the roof and the baby screamed. They started to chat and for that moment on the parent landed in the building in front of my window and screamed to encourage the baby. The parent waited patiently for maybe 10 minutes and then landed again in our roof top. This time the baby felt confident to fly and took off with the parent flying along! It could not have been more perfect as I was afraid the baby would have to figure it out what to eat and where the flock was by itself. All came together amazingly well!!

The first video shows the baby attitude when released and second video showed the parent landing in the roof. In the second video around 45 seconds on we can see both parent and baby interacting! I could not film the moment the baby took off as I was trying to stay away from the window to allow the parent to approach the baby.

Our little wounded budgie is doing well, still needs a lot of sleep but she showed appetite and is mostly interested in what is going on around her.
Last edited: Oct 15, 2021

How is the budgie doing?
OP

Littleredbeak said:
How is the budgie doing?
Click to expand...

She is amazingly fine! Today she was active all day, running in the bottom of the cage, climbing the bars and made contact to Bud, the male budgie in the cage close to hers.

Her head cleaned up most of the coagulated blood and shows a healthy skin. Her eyes are no longer swallowed and she ate really well, even tried some fresh vegetables that were new to her.

She is still a bald budgie for now, but other than that she is a fine full of life little soul.

Its been so long since I heard the 'chiriri' of a broto, 7 years or so. I bet this one comes back to visit you, my friend! Good one you for helping him!
OP

wrench13 said:
Its been so long since I heard the 'chiriri' of a broto, 7 years or so.
Click to expand...

It´s really nice to wake up in the morning and hear their chiriri when they fly nearby How did you met a Broto? Was you here in South America or are they sold as pet elsewhere ?

I don´t count on the baby coming to visit here , they usually fly high and don´t want to land on the windows and balconies here. Rio is well provided of Atlantic Forest fragments in the heart of the city, so they would rather go from one forest patch to another...

The whole Brotogeris experience we just had made me really happy. I am always worried when I release a rescued baby if the bird will be able to survive. I remember seeing sparrow families coming to my balcony to eat the seeds spilled in the floor and teaching their young ones that was a place to go for food. It was common to see some days later just the young sparrow coming for food... Nevertheless unless the baby is somehow injured for life or too much attached to us, I release them with my fingers crossed. This time I was able to see the parent coming to pick up its baby and felt a huge sense of relief!

Oh my heart, the sight of the parent reuniting with that baby brought tears to my eyes. You did such an amazing, wonderful thing for that little family.

I'm so happy to hear that your budgie is doing well! She is a fighter and with your loving care will keep improving.

Kitekeeper said:
It´s really nice to wake up in the morning and hear their chiriri when they fly nearby How did you met a Broto? Was you here in South America or are they sold as pet elsewhere ?
Click to expand...

I've never seen any Broto's but they are sold in other countries eg. in US or in Europe. Once time I even was thinking about getting them in the future.
OP


Rozalka said:
Once time I even was thinking about getting them in the future.
Click to expand...

Why not? The baby was twice the size of a peachfaced lovebird and seemed to be quite an interesting companion. Interactive, not too afraid of me, really cool.

For us here, Brotos are native species, so to have one legally we should purchase from a registered breeder. Most registered breeders would rather breed macaws, blue fronted parrots instead of Brotos as they would not raise so much money as the first two. 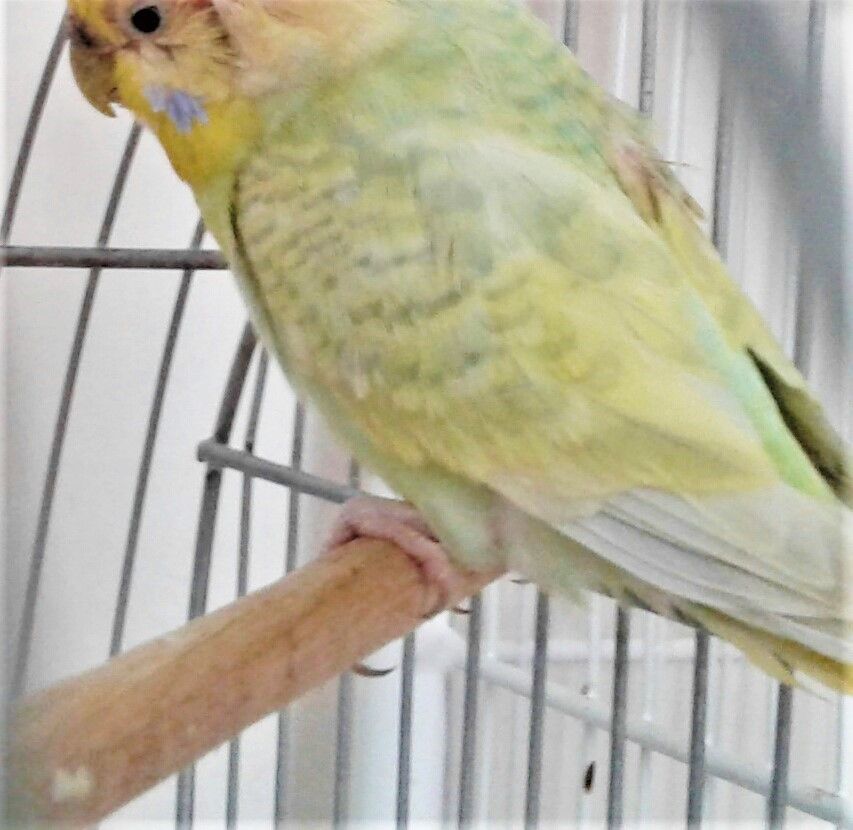 
Why not? The baby was twice the size of a peachfaced lovebird and seemed to be quite an interesting companion. Interactive, not too afraid of me, really cool.
Click to expand...

Nowadays I stopped thinking about my parrot future - I'm waiting for a moment when I'll move and then I will be observing myself if I'll create better conditions for my current fids. If so, then I can continue being a parront. If not, they are my last fids.

Rozalka said:
Nowadays I stopped thinking about my parrot future - I'm waiting for a moment when I'll move and then I will be observing myself if I'll create better conditions for my current fids. If so, then I can continue being a parront. If not, they are my last fids.
Click to expand...

I'm in the same boat. I'd love cockatoo or a more velcro parrot and found two

but had to be a grown up and say no - at least not at this time ...maybe in the future if it's meant to be. Right now I'm just trying to be the best I can be for the wonderful peeps I do have in my life.

Yes, I had a Brotogeris, a yellow winged one, as our parrot, our companion. His name was Max and he picked me out of whole bunch of them. He hopped on my finger , looked straight in the face and whistled at me. We had him for 6 years or so, until he passed. Never sick or anything but loving and inquisitive and bold and.. I could go on & on. One day he was just .... gone. I still miss him to this day.
OP

wrench13 said:
He hopped on my finger , looked straight in the face and whistled at me.
Click to expand...

That´s really awesome!!! It is just perfect when they choose to be with us in such clear and neat way!!

I am sorry for your loss, six years is just so little time with such a wonderful friend.
You must log in or register to reply here.

Is Hummingbird Vine safe for Parakeets/Budgies?

What is best for a wild orphan baby bird?

P
How to get my cockatiel to eat fruit