I?m thinking of adopting a cockatoo, however she?s badly plucked, missing toes on one foot and 31 years old. Apparently most of her life she was tethered in a restaurant. I think she?s had a few homes since then. Currently I think she is much loved, but being fed an incorrect diet, no bathing, small room with smokey atmosphere. Overcrowded cage with no rotation of toys.

I have the time and patience, my macaw had beautiful plumage. I would make sure she had plenty of one on one time, diet, showers, sunlight etc! But will these feathers every return or is she too far gone? Not seen her in person yet. Also can someone confirm the identity? Owner says Sulphur Crested, but it doesn?t look big enough. 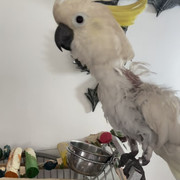 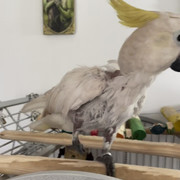 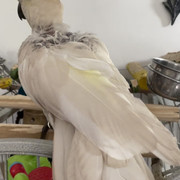 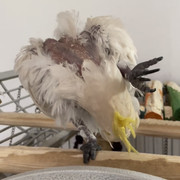 Welcome, deep respect for considering adopting this beauty "diamond in the rough" cockatoo. Appears a SC, perhaps a hybrid or small individual.

Significant plucking but we've seen far worse. Aside from well chewed patches, overall feathering is robust and reasonably healthy. Don't let the missing toes, plucking, or middle age dissuade you if seeking a labor of love! Please be aware of general cockatoo reputation including screaming, close bonding leading to "velcro" effect, and powerful beak. In other words, approach this with eyes wide open and learn all you can about the species. I'd also recommend an early baseline visit with certified avian vet with emphasis on lab work to identify health issues. Most plucking is emotional gratification though health issues may induce. Truly excellent narrative on plucking: http://www.parrotforums.com/behavioral/52217-plucking-search-answers.html

I'd recommend visiting this bird if interested. The adage of 'letting the bird choose you" pays dividends and enhances the bonding process. Your large bird experience will pay dividends with the caveat of epic cockatoo personalities. They are not for everyone, but I cannot imagine life without them in my home!
J

If you have never had a cockatoo before, even if you have had big birds such as Macaws, just know that they are still very different, and taking one on with behavioral issues can be frustrating and heart breaking, even when we have bird experience.

I think that you (compared to someone with little or no big bird experience) would be much better for this baby, as she is clearly not in a suitable home. Feather plucking can be a *very* hard habit to remedy once a bird has begun plucking. It is self mutilation that, like in humans, almost becomes like an addiction in that it is a coping mechanism.

As far as "if she is too far gone", there is always hope for these babies, but again, it is going to depend on the individual bird, her needs, and whether or not an owner can accommodate those needs.

I would try to do as much research as you can about feather plucking if you haven't already, as something like moving into a new home is likely going to exacerbate it at first. But if she is in a smoking home with a bad diet and not enough stimulation, she needs proper care ASAP.

Being well-informed (if you are not already) on behavioral issues in cockatoos specifically before you adopt this baby will better equip you to the inevitable hardships to come. I am not trying to discourage you at all--just letting you know the sad reality of dealing with a feather plucking bird, in case you are not aware.

Also, make sure that it is ruled out that the feather plucking is in fact a behavior issue, as parasites can also cause birds to pluck.

Let us know if you end up adopting her! Poor baby needs some good TLC.

BuzzLightyear said:
I have the time and patience, my macaw had beautiful plumage. I would make sure she had plenty of one on one time, diet, showers, sunlight etc! But will these feathers every return or is she too far gone? ...
Click to expand...

Expressing one's thoughts in typing can lead to miscommunications. But, I would be worried if you thought that returning her beautiful plumage is the Main goal.

As justrosie has noted, plucking can become an entrenched habit. Even if everything in her life becomes ideal, there is no guarantee that she stops plucking, and, if she does, no certainty that the feathers return or return fully. A home where her needs are well-met would certainly be a great thing for her. She Might stop, and the feathers Might return. But, maybe not.

So, when I read your post, I think it will help Your Decision-making, if you consider how YOU will feel or react IF her feathers don't return or IF she continues to pluck. IF you feel you would still be All-In with Loving her in that case, then you might be the right person for her! In that case, you should maybe look into the next step, of an In-Person visit.
OP
B

Thank you both for your informed replies. I’ve read extensively about plucking, and was going to take her to an avian vet as soon as I got her home. I agree with the bird picking you. If she has a complete aversion to me, I certainly wouldn’t inflict the further stress upon her. But I feel I need to purchase her to at least give her good care. At the moment she’s eating a lot of cake, biscuits, corn! I’ve got the time to give her as much attention as she needs, when it comes to any animals I have a lot of patience.

My house is dust free, I know cockatoos are quite powdery, I have asthma but it is managed very well. I’d also try and get her into the habit of having a shower too as apparently cockatoos love water.

I just want her to live the rest of her life stress free and happy. I’m just hoping that with time, patience and good food it will pay dividends. I will keep reading, learning, and hopefully she will be pleased to see me on Friday when I go to see her. &#55357;&#56842;
OP
B

If her feathers don’t return, I can live with that, I’m certainly not worried about being seen out and about with a partially bald feather baby, my dachshund has no eyes following a bilateral enucleation. He’s still my special boy and has adapted well.

I hope I am not coming across as someone that wants the perfect looking bird. Her happiness and well-being is far more important. I have been around various birds all my life, cockatiel was my first ad a child. Then my mum had a Mynah bird, budgies, a friend I met through parrots has an umbrella cockatoo who is a little bugger! But then my macaw used to cut all our clothes in half if they was on the airer! It used to make me laugh as it was almost at the most inopportune moment too! Ronnie would laugh too!

Any updates? Did you ended up getting her?!

I think.....he or she looks beautiful and ready to start a new chapter. Look at those wonderful eyes. Afterall,......

"Beauty is in the eye of the beholder"
You must log in or register to reply here.

How To Get Flight Feathers To Grow Back?