Hi everyone,
I am so glad I've found this forum.
I have in the past two days, taken in three parrots - two conures (Nanday and Red-headed) and a Bronze Winged Pionus.
All three birds are in a terrible condition, having being kept by an animal hoarder, with minimal interaction and incorrect nutrition - I have had them checked out by a vet who specializes in tropical birds and he has confirmed that they are not sick, just neglected and significantly under weight (you can see the Nanday's breastbone); The birds also smell horrendous and are in need of some serious TLC, which they are now receiving.

The main issue I currently have is with the behaviour of the pionus. He is absolutely terrified and has reacted very violently towards us - as I tried to lift him from the carrier into the cage, he bit my hands, drawing blood on two occasions. and bit me several more times before I was able to get hold of him and get him into a safe space. He is now in a cage that is a bit too small for him (a new one is arriving tomorrow for the conures and he will then move into a much larger cage.

We have already made some small steps with him; when he arrived, he was almost panting with fear - he has stopped that now when we talk to him. I have been talk to him quietly and whitling a friendly tune and he seems to be slightly engaged at these times. However he is currently refusing all food and water and is rooted to a perch, moving very little - I know it sounds stupid, but he almost seem to be cowering.

I fully appreciate that this is going to be a long process to restore this poor bird to health, both physically and mentally and I am not expecting an overnight fix; however, I was just wondering if anyone here has experience of dealing with a traumatised pionus and has any ideas, tips or advice they could share on helping him - there is one glimmer of hope in that he has been ringed, which I am assuming was done by the breeder/original seller; that would suggest to me that he had been socialized with humans prior to ending up in that appalling situation; I am wondering if there is any chance that this previous conditioning might 'kick in' as our interaction with him increases.

He is a stunningly beautiful bird - or at least he will be - and I would love to be able to interact with him in some way; any help you could provide would be very gratefully received.
Thanks
Mike
Z

Has he eaten or drank anything yet?

If not, I would leave him alone for a few hours and maybe if he's comfortable enough he will venture from the same spot.
I do not own a pionus but have adopted a few birds that were very traumatized, it takes quite a long time for them to become doing things that make them vulnerable like eating.
You could possibly try covering the cage halfway and he may become more comfortable if he has more 'walls'.
Offer the most tempting foods you can, fruit, whole millet spray, nuts, seeds. When they aren't eating the most important thing is getting them to eat something, not what they are eating.
If you don't see him drinking at all you could try spraying water above him and letting it fall down on him like rain, then he will preen his feathers and drink some of the water.

Once you start getting these lovely birds on the right track it will be such a rewarding experience.
Thank you for taking these parrots in even though you knew how hard the road to recovery will be.
Hope this helps

Correct! It is very important that he eat even if its not a great food choice. Offer what he was eating before you got him. Change of diet is best done over a period of time, weeks and even months! As far as his being afraid, that too should be approached slowly and incrementally. What I did with a Orange Wing Amazon many years ago, was to approach the cage slowly and at the first sign of his fear, back off a foot or so, take a chair and sit, talking to him in a soft friendly voice. Over time the chair gets closer and closer. Parrots like to be read to, go take the opportunity to read to him the thread "I Love Amazons" on our Amazon subforum. It contains a huge amount of superbe info which is applicable to ALL parrots, not just amazons.

He KNOWS you are going to eat him! He’s not being vicious, he is only trying to stay alive for a few more hours!
OP
M

Thank you so much for your advice. He is a little more settled this morning and has eaten some apple. I have sprayed his cage with a fine mist as suggested and he is already starting to look better - his colours are showing and he is not as cowed as he was yesterday. Just lots of time, patience and TLC (and I am looking forward to reading to him!)

Hello Mike,
Bronze wing is my dream bird, thank you so much for helping these poor babies and please keep us updated and maybe post some pics if you have time

StormThePi said:
Hello Mike,
Bronze wing is my dream bird, thank you so much for helping these poor babies and please keep us updated and maybe post some pics if you have time

I've attached two or three photos of Charlie (Pionus) below.
He is still refusing to be handled (Early days) but is becoming more confident - he is eating a variety of seeds and fresh and dried fruits and drinking now, which is a relief. I took the Nandy Conure over to his cage this evening and he sat on the top and the two had a a good chat (I really wish I spoke Parrot!) Then Charlie seemed to gain a lot of confidence, wandered all around his cage, trying all of his toys out and walking upside down across the roof of the cage.

He is still looking very disheveled as you can see, but he is starting to preen himself and is ruffling his feathers which he hasn't done before today so hopefully we will have him back in condition soon.

The first photo (against the red wall) was taken in his previous "home" last Tuesday and the other two I took this morning...

He’s beautiful! Thank u for posting. I can see he was plucking, hopefully with a healthy diet those feathers will grow back. I’m so glad he is eating better now! My Pionus is a very picky eater he’s pretty young yet though it’s almost like having a picky toddler! Keep offering a variety of healthy foods he will probably refuse them but keep trying, he will come around. Also be sure to keep a good routine so he knows what to expect and becomes more comfortable. Doesn’t sound like he had a good routine in his last home keep us updated! I’ve attached a pic of Storm last weekend while we were out for a walk. He loves being outside! 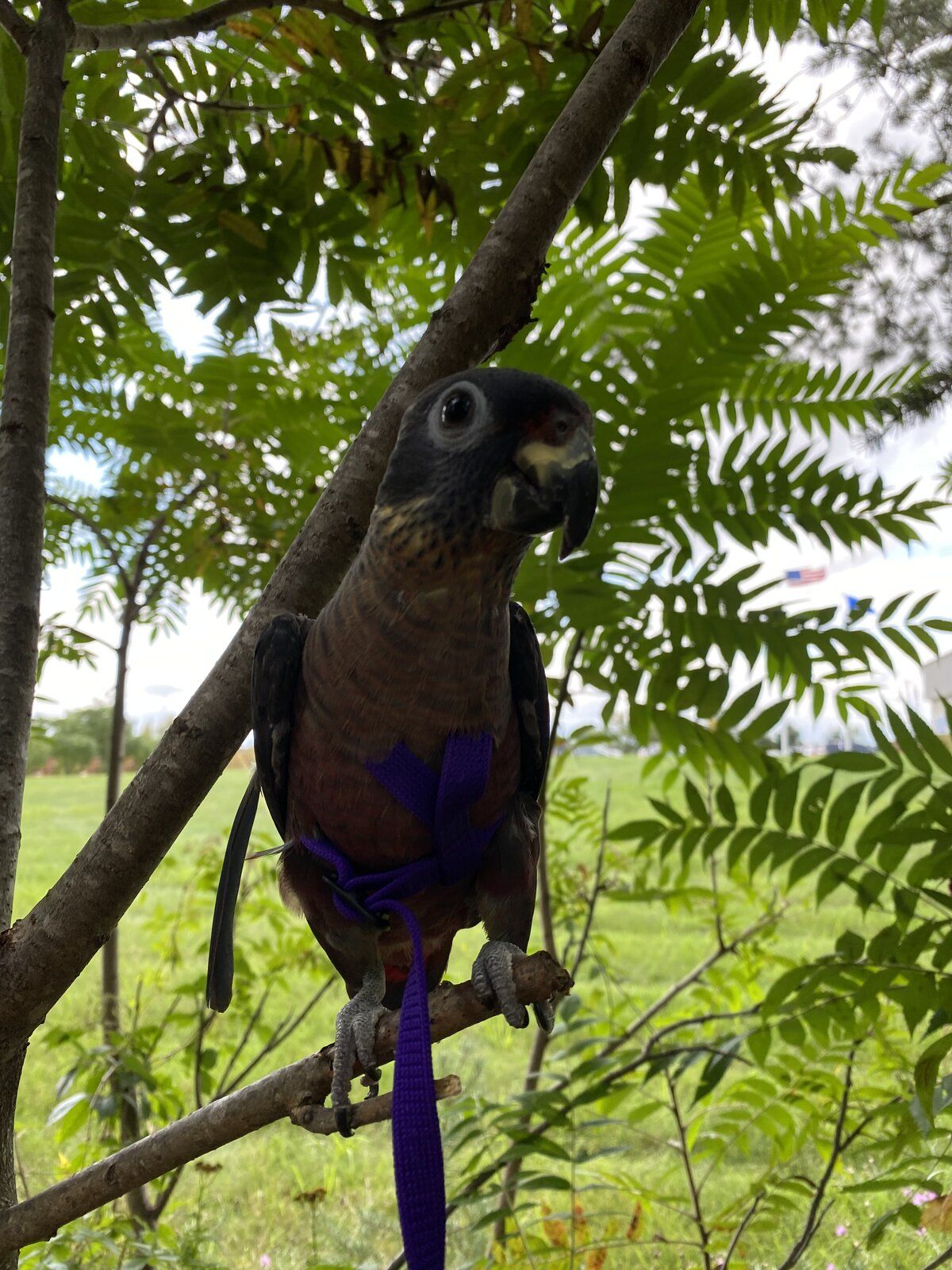 S
New Conure does not trust me