I made a separated thread because this one will have many panels (maybe 4 posts?). It is supposed to be a teaser of my story idea I haven't started writing. The shown moments are already confirmed, during writing I will be remembering to write the events from this thread (they will be just expanded, all of the scenes are cut here)

Ignore how I'm terrible in writing announcements. Also, ignore how I was making the same pose for everyone... it's mostly because during doing comics I try different shorts because in general comics take more time

Ps. I have already been laughed at by somebody for the breaking window scene - I know there's no such thing and there's pressure difference between inside and outside the plane... I ignored the last fact. They're BIRDS. They can fly. Even if we could break windows, this wouldn't help us

Opening the door (Hatch) would have been a better choice. For passengers to exit the aircraft it would have been at an elevation that would not had required interior pressurization and fling slower. Longer flights make seems for Parrots to use aircraft.

The above items are common knowledge for individuals that travel extensively. Since most individuals do not, your approach works with the vast majority of individuals that fly on occasion or have never flown. I would not worry about it as it is for a comic strip and playing wide and loose with such details is common place.

SailBoat said:
Opening the door (Hatch) would have been a better choice.
Click to expand...

However I'm thinking - because there are many parrots inside, they could not fly out in time before plane crashing, so maybe it was better to make more "exits"

Rozalka, anyone who makes fun of your comics is probably jealous that they can’t make them, and threatened by your skill. You are doing a very nice job and I think you should be proud of your abilities and the art that you have made.

I have encountered petty jealous people who want to bring me down. I’m learning to ignore them.

I really like your comics. I’ve wanted to make a comic using a character like me and a parrot character like my deceased Quaker, Lucy. But I haven’t got it together to do it. You ARE making your own comics and art. Way to go!!

However I'm thinking - because there are many parrots inside, they could not fly out in time before plane crashing, so maybe it was better to make more "exits"

It is important not to over think you're comic strip as its for fun.
Regarding the number of exits, aircraft of size have them on the left and right sides near the front, over the wings and with larger aircraft neat the rear. Also, even with Parrots the size of Macs, they could easily double up or more to leave out an open hatch. With the aircraft moving (in flight) the front most hatches would not be used as they are in front of the engines.

Have fun with this, as I am enjoying reading it and looking for more!
OP

Here's the next part 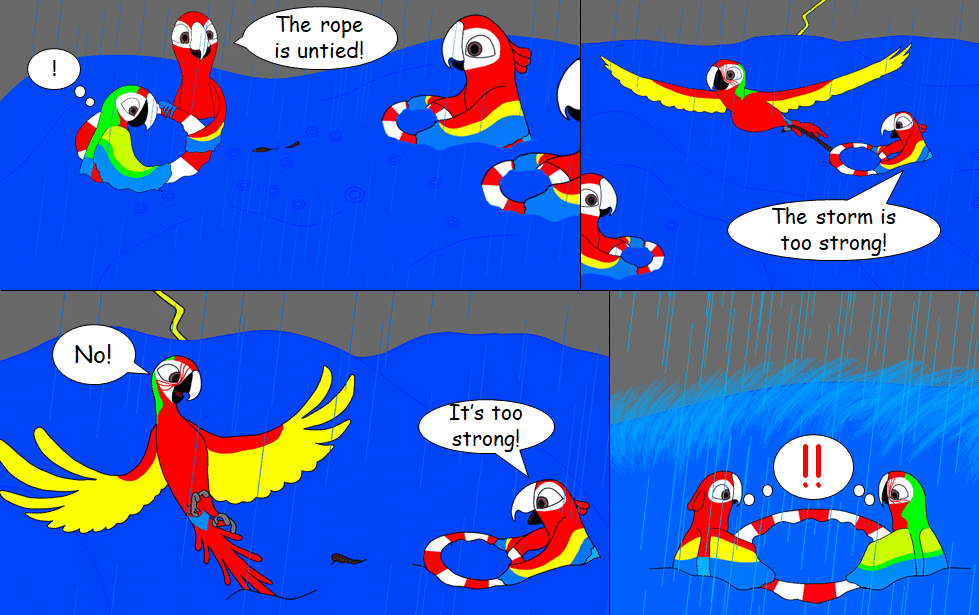 I'm surprised that I finished it today - I thought I'd post it on Tuesday/Wednesday.

That is just too funny!! Love it!!
OP 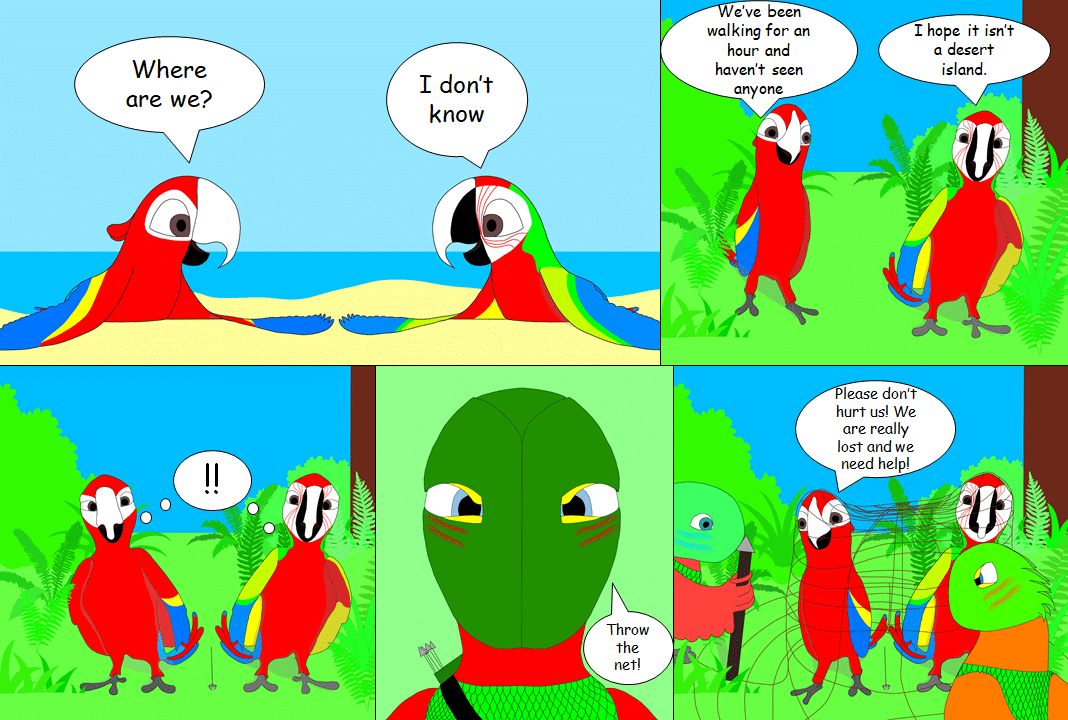 As the plot thickens!!
Loving it!!

What are the green-headed animals?
OP

HeatherG said:
What are the green-headed animals?
Click to expand...

Parrots. More details would be a spoiler
OP 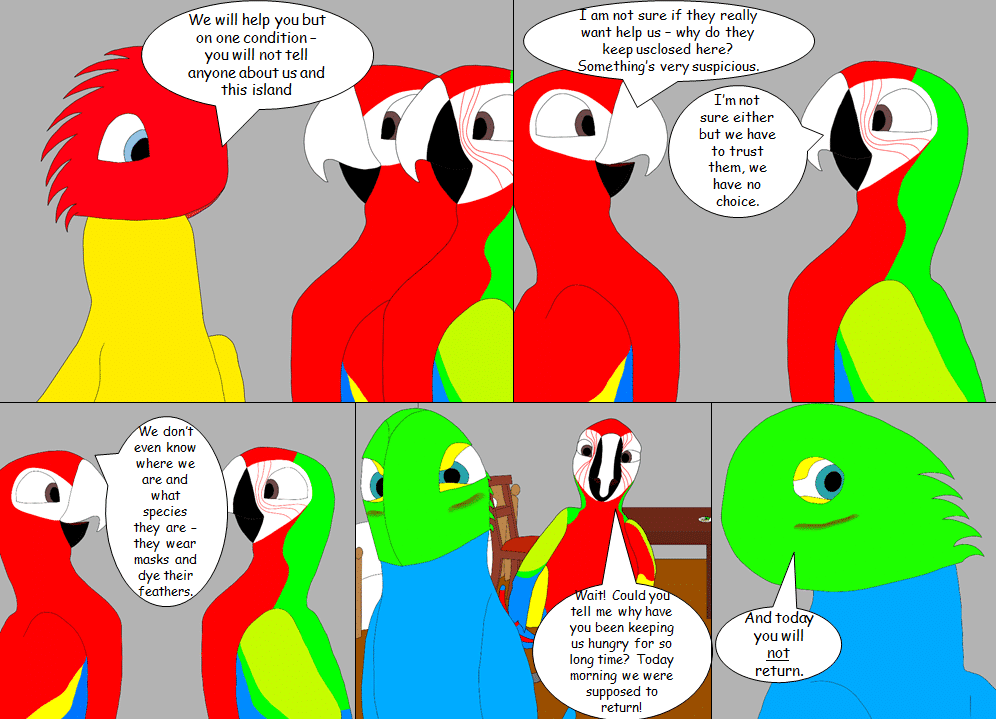 It's the end of the teaser 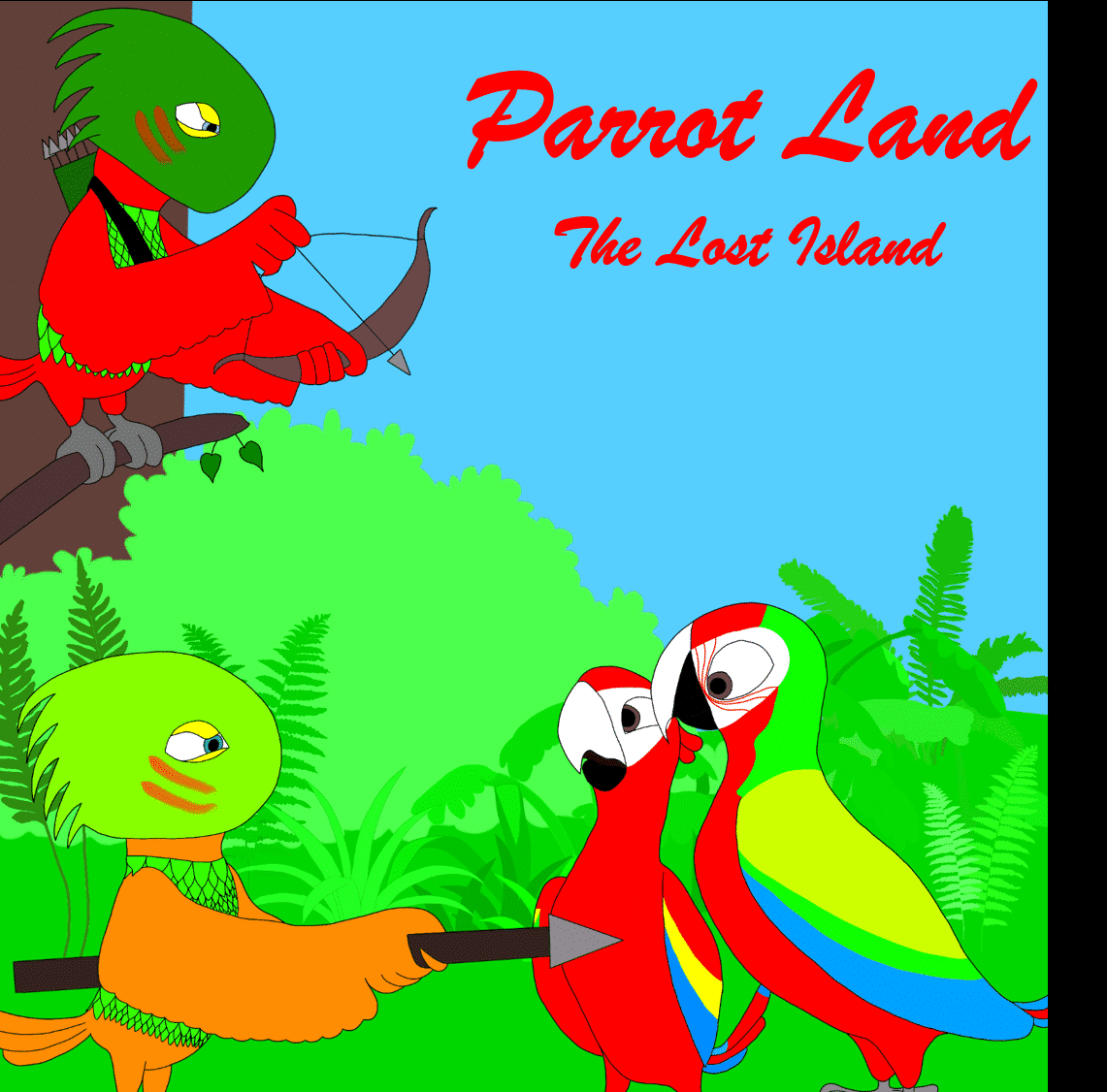 Ok that is a cliff hanger to end your teaser on, that's for sure! I love it!
You must log in or register to reply here.

T
Am I doing this all wrong?

A Rant About My Family (Mental Illness and Neurodiversity)