A Bird Haven, the only specialty bird store in northern San Diego County is closing after 40 years of operation. Owners are retiring, and their other store near the city of S.D. has been purchased by employees. My first bird, Gonzo was purchased from them 34 years ago. Always a friendly place with several very long-term employees. 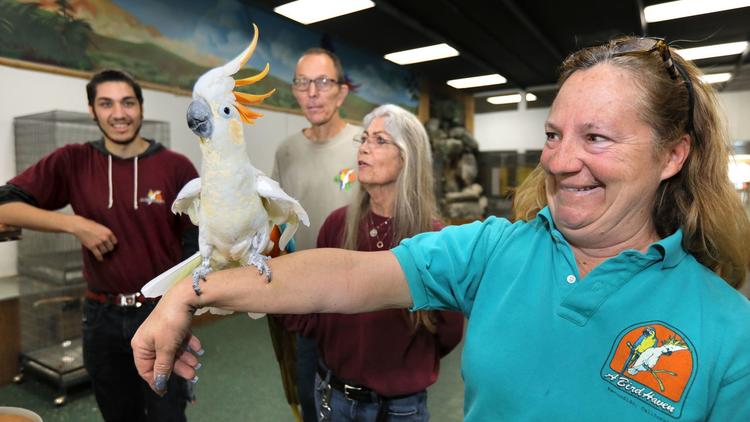 Sharon Petrarca isn’t sure what she’ll miss most when she and her husband, Mark, close the doors later this month on their 40-year-old business, A Bird Haven, in Escondido. Maybe it will be the jungle-like cacophony of tweets and caws from the dozens of exotic birds in the store at 249 E. Grand Ave. Or it could be the longtime customers, who arrive in a steady stream each day to wish the Petrarcas a happy retirement before closing day on March 27. But it will most likely be the employees, many of whom have worked at the store for decades, like 24-year staffer Larry Brown, an ever-smiling man in his 60s with autism. Store manager Maxine Whitesel of Valley Center said she can’t imagine what she’ll do come March 28. She’s worked at A Bird Haven for 18 years. “There’s something very rewarding about matching up a bird with the right person and seeing them happy together,” Whitesel said through tears. “It’s so hard to believe that this won’t be here anymore.”

In preparation for the closure, many of the cages, hand-mixed bird feed and other merchandise at the Escondido store have been sold and cleared out. But there are still dozens of birds available for sale, from tiny zebra finches priced at $5.99 to a large 9-year-old Catalina macaw named Copious, who’s priced at $2,000. There’s also Oliver, a 3-year-old, citron-crested cockatoo with an ebullient personality, and Paris, a regal, 14-year-old, blue-and-gold macaw with tail feathers two feet long. The Petrarcas, who are both 61, met as teenagers in Florida. When they were 19, they packed up their car and two pet birds and headed west to San Diego. Their dream was to open their own bird store someday. “We just loved birds and always wanted to be our own boss,” she said. “It’s just a fun job. We get to come to work every day and play with all these beautiful birds. Who wouldn’t like that?” In 1978, the East County couple opened their first store in North Park, Our Feathered Friends, which was later relocated to 4420 Rainer Ave. in San Diego’s Grantville neighborhood. In 1988, they purchased A Bird Haven from its founder, Chris Estep, who still runs a sister shop, Reptile Haven, in Vista. Five years later, the Petrarcas bought the building on Grand Avenue and moved A Bird Haven from its original location on East Valley Parkway at North Citrus Avenue. Although A Bird Haven is flying the coop, Our Feathered Friends will carry on under the new ownership of its longtime store managers, Rafael and Alison Hernandez.

When the Petrarcas started in the business in the late 1970s, birds were popular pets, thanks in no small part to the TV show “Baretta” about an undercover cop with a trained cockatoo. Back in those days, the Petrarcas imported most of their birds from Latin and South America. But when import laws changed in the mid-1980s, the couple started their own breeding ranch in Arizona, where all the babies are raised by hand. Disagreeable birds prone to biting aren’t offered for sale. Whitesel said she’s filled two aviaries in her backyard with these ornery rejects. Escondido resident Patty Monahan, who has worked at A Bird Haven since 1992, said she’s hand-trained hundreds of baby birds at the shop over the years. She said the store’s people-friendly birds and its customer service are what the store is known for. Among the many customers stopping in to say goodbye on Thursday was Akino Tsuchiya of Carlsbad, who bought her first bird from the shop, a dusky conure, in 2008. “The staff here is really expert at answering all my questions and they were always so kind and warm,” Tsuchiya said. “It’s the best pet store experience I’ve ever had.” Also visiting Thursday was former employee Kristen Webster of Lakeside, who worked at both stores for four years back in the early 2000s. She said she’s been fascinated with birds ever since the age of 7, when her mom brought home the family’s first bird, an African gray parrot that she’d purchased at Our Feathered Friends. Multi-generational bird owners are common at A Bird Haven, since many of these birds can live 50 years or more. Petrarca said she’s seen little kids come in with their parents to buy a parakeet and come back after college graduation to buy a parrot. Sometimes birds outlive their owners, like Chewbacca, an 18-year-old white umbrella cockatoo that was returned to the shop after his elderly owner died. Petrarca said Chewbacca won’t be sold again. Instead, she’ll move him to the Arizona ranch where he’ll be paired with a mate. Bird matings don’t always work, and neither do pairings between owners and birds. African gray parrots can be trained to talk easily, but they’re not cuddly. Cockatoos love affection but they’re noisy and demanding. Because of this, A Bird Haven offered a one-year trade-off policy for matches gone wrong, as well as free wing and toenail trims for life. Our Feathered Friends will continue to honor those policies with A Bird Haven customers. Petrarca said she and her husband had always planned to retire at 65, but with the economy strong and the Hernandezes eager to take over the San Diego store, they decided to retire early. Their plans are to travel the world, including the Amazon where many of the birds they sell are native species. “It’s been a good run,” she said, praising Councilwoman Olga Diaz and the city of Escondido for keeping downtown alive with farmers markets, Cruisin’ Grand and other events. “We can’t say enough about how great the city and our customers have been to us over the years.” 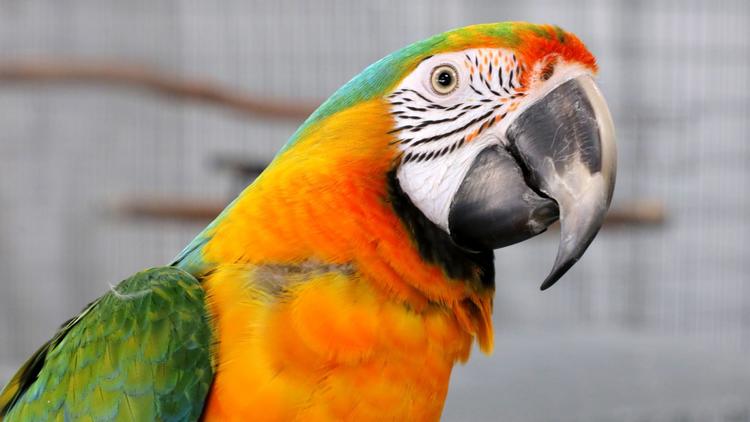 Close up view of "Copious," a Catalina macaw for sale at A Bird Haven in Escondido, which will close March 27 after 40 years in business. (Charlie Neuman / San Diego Union-Tribune) 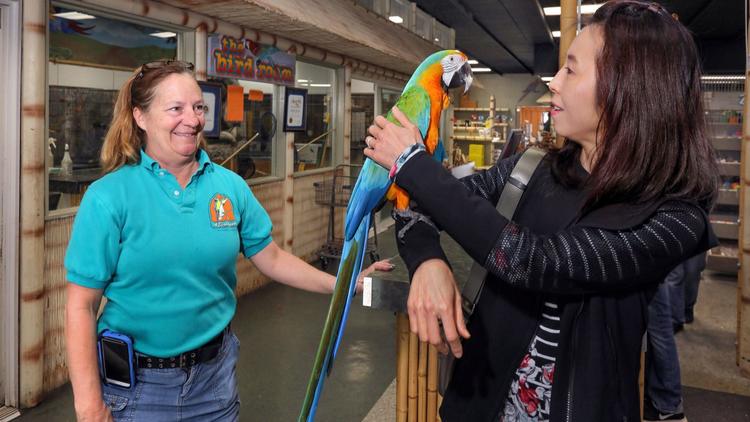 I’ve been there a few times. Wow, that’s the second S.D. bird store to close within a few years, right? I used to love to go down to San Diego and spend the day going to all the bird stores around there, and having lunch. I’d stock up on Harrison’s because the last I remember, the same things cost significantly less than in OC.

That is so sad, definitely the end of an era. I find it so amazing that you got Gonzo there 34 years ago!
Their long time employees speak to what kind of people they are, I hope they enjoy their retirement to the fullest.

Parrots
Rio (Yellow sided conure) sadly no longer with us

dang, such a shame to see somewhere like this go. I do wish in England we get places even close to the standards of this place. Hopefully others will open new places that can come anywhere close to how well run this place clearly was. You can tell from the pictures how happy the birds were there
OP

Third picture shows the enclosed "bird room" that housed the birds for sale. Typically 5 or 6 tame ones would be on stands just waiting to be picked up and held.

Really going to miss them. A wonderful "mom and pop" store with personalized service and a far greater selection than found at the "big box" stores like Petco and PetSmart.

Somewhat surprised the store will close. It is fairly central to a large population that is growing with new home construction starting once again. Downtown Escondido has several other vacancies, so it isn't like they were priced out of the market.

Lets wish them a long and happy retirement. You dont find bird stores like this every day.

Ever increasing operating costs including all taxes, add the continual demands of operating a Mom & Pop store, the want to retire and no interested parties in purchasing their business.

All to common story for Mom & Pop business. Its very sad, since it is this type of businesses that bring all of us the services we all enjoy with a pride in what they provide and support.

Parrots
Normal (or not so!) Grey Cockatiel

Looks like an outstanding place. It reminds me of a local bird store. Very sad of them closing. Not many Pop & Mom stores left for sure. May they enjoy their retirement.
You must log in or register to reply here.

I disappeared after Hurricane Harvey

M
Aziza, my pet Congo African Grey Parrot: The Homecoming and Beyond:

Adopted IRN - wordy Backstory, Question on his size, & other tidbits

Possible Adoption Happening(New to the Forum)
2