Every breath you take ... I'll be watching you

I feel like I have holes in the back of my head from the constant, watchful eye of Toby The Eclectus. We spend our days together in my home office and I swear he watches every move I make.

Yesterday, I laid down for a nap and when I woke I was surprised that Toby wasn't on his highest perch watching me as I slept in the next room. So I grabbed my phone and zoomed the camera all the way in and sure enough, there he was hiding behind his line of toys peaking through. What a sneaky goose! 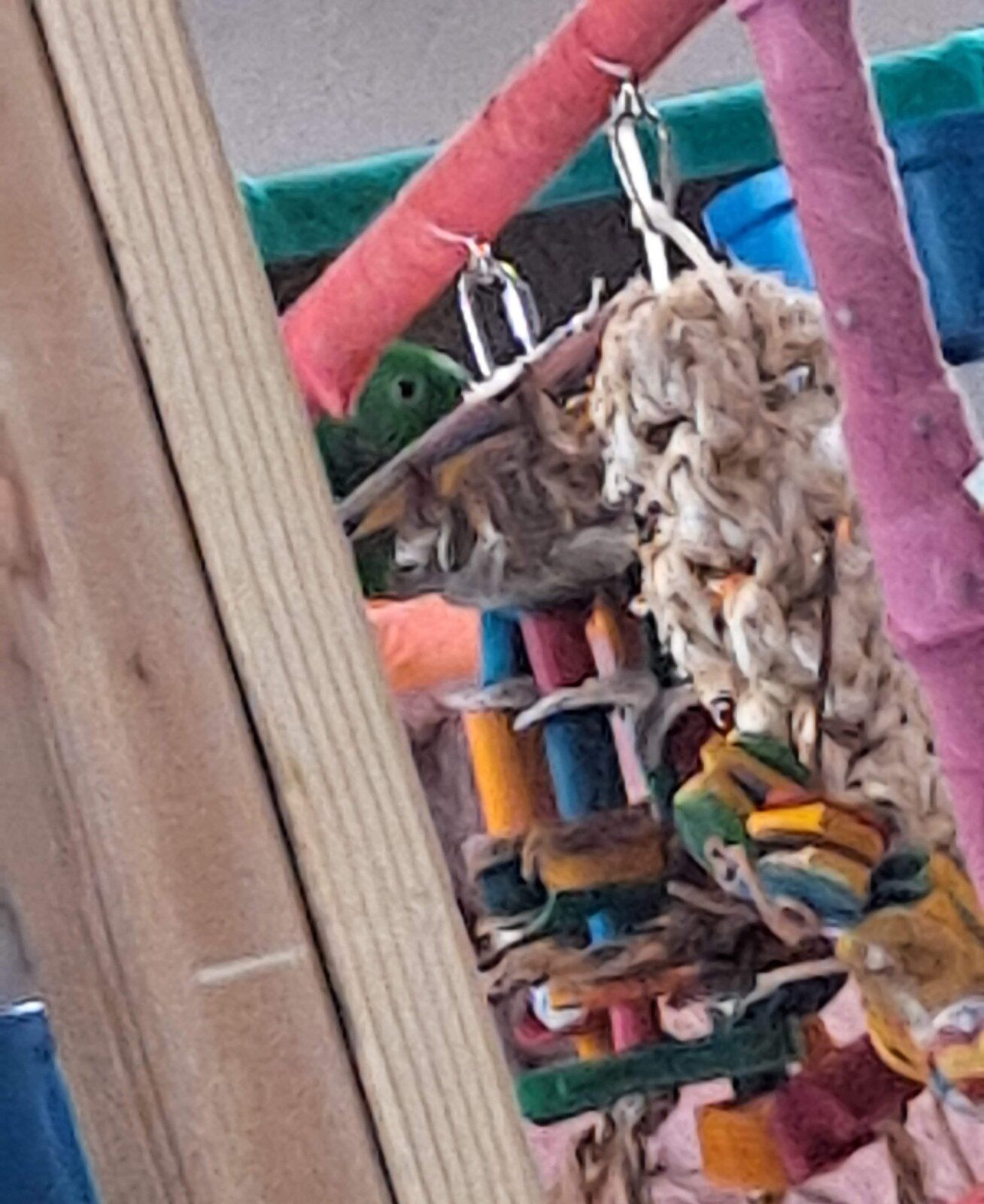 Oh yeah, they definitely watch us, ALL. THE. TIME. More so than most folks realize. It's how they do things, learn about us, our routines...

I’d like to hear more about your home office set up for Toby! I start a new job, remote, on 5/2 and it’ll be my first time working from home with a parrot. I was in-person all through the pandemic and just now getting a remote position. I’m wondering what set-up I need to keep him occupied and quiet. I’m thinking one of those driftwood play stands with some toys on it. But he still doesn’t play with toys very much.

tacocaTEclectus said:
I’d like to hear more about your home office set up for Toby! I start a new job, remote, on 5/2 and it’ll be my first time working from home with a parrot. I was in-person all through the pandemic and just now getting a remote position. I’m wondering what set-up I need to keep him occupied and quiet. I’m thinking one of those driftwood play stands with some toys on it. But he still doesn’t play with toys very much.
Click to expand...

I made a large playstand similar to the one offered by https://bemorebirds.com/. Ours is quite a bit wider than this but very similar design. I paid around $75US for the materials. I didn't glue any of it together because I wanted to be able to disassemble it if I had to move it. I drilled stainless screws through some of the joints to keep it together. I cover the PVC with vet tape: https://www.amazon.com/dp/B076ZRR1G8
If he is allowed to eat on the play stand the vet tape has to be cleaned or replaced every couple of days.

Next to the play stand is his feeding stand which looks like this one: https://www.amazon.com/PETSITE-Stainless-Parrot-Training-Feeding

So, yeah, it is a quite a bit of investment, but we kind of built up to this over time.

The best part of working from home with a parrot is being able to take breaks and spend time with the bird. We take a stroll through the house to the sun room to watch what's going on outside while he eats almond pieces riding on my shoulder.

The most difficult part for us is that once out of his cage, Toby does not go into his cage very easily even if there are major treats in there. That's a problem if I have to go into the office in the afternoon or leave the house for an extended time. I have to plan my time out of the house early in the morning before I get him out or deal with trying to get him to go in his cage. For now, he is a "hands-off" bird so he has to want to step off my should and get in his cage. He generally does that readily at night, but resists during the day.

Well, I hope that helps.

We use those splat mats too, but I just throw them in the washing machine - they are definitely machine washable! HOWEVER, my playstands have trays underneath, so I've never had to contend with more than the occasional mis-aimed poop... Does parrot poop gum up the washing machine??

I work with a parrot in my office, as is my partner (albeit temporarily). Kirby is a TERRIBLE coworker, as he talks LOUDLY AND CONSTANTLY anytime I am on the phone (however, as a contract/freelance illustrator, I mostly just tell people to deal with it or I leave the room if it's super important lol - I also have a toddler in the room with me about half the week and she's equally bad). Sammy on the other hand is very polite and gets quiet while you talk, as he intently listens.

Kirby ironically is louder on his playstand than in his cage - in the cage instead of yelling and talking he attacks his toys (he has toys on the playstand too but he prefers yelling when he's "free" lol).

On the original topic though - if I lay down on the bean bag chair in my office to read or nap, Kirby likes to inch closer every time my eyes are closed! Makes me really miss Cricket, who would just rudely fly onto my head, climb down my hair, and chirp into my ear until I pet him.

Been there, done that, always on the watch for it!

Those ekkie boys absolutely live to provide!
Last edited: Apr 17, 2022
You must log in or register to reply here.

Dealing with the loss of my life-long best friend
2

Shar-Pei On The Run!!! I'm Exhausted!