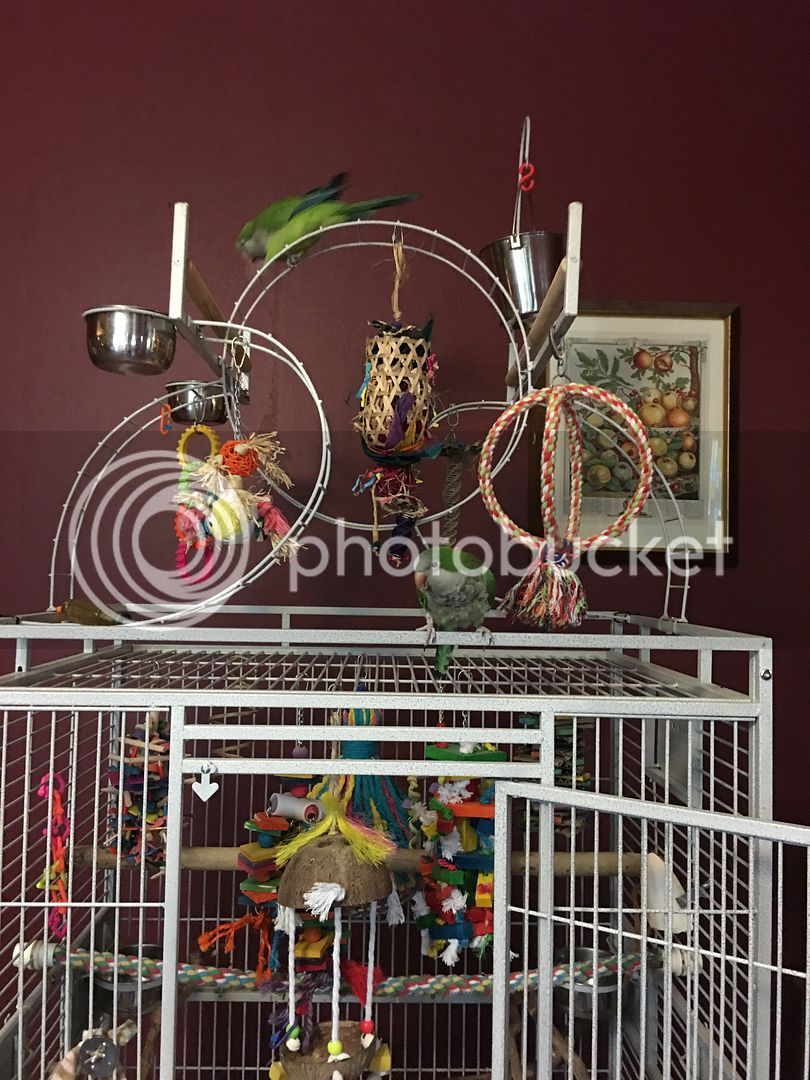 My little ray of sunshine recently had an unusually long run of good behavior. It isn't unheard of for Harry to behave so beautifully but it is rare and it's always, always followed by a period of hooliganism and extreme brattiness. When she is in a charmed state you can almost see Harry's halo. My DIL was fortunate enough to visit while Harry was in an altered state. My DIL knows Harry and normally keeps herself at a safe distance, this time Harry was absolutely enchanting, she let Carol tickle her belly, she called Carol a pretty, pretty girl, she wolf whistled and purred at her and said, sweet, sweet bird. Carol fell for the act like a ton of bricks and demanded to take Harry home to live with her. My darling kept up the act for weeks, no swear words, only the planet's sweetest quaker! Right!

Harry is a chatterbox, she learns new words and phrases and mimics a wide range of noises. For years I tried every trick in the book and made up a few new ones in an attempt to get Harry to say 'girl'. Sam, my male quaker seems to recognize gender and refers to males and females accordingly. Eventually I gave up on ever hearing Harry say the word, girl. I would say, pretty girl or good girl and Harry would ruffle her feathers and yell back, pretty, pretty, boy!!! or, good boy!!! Fine, say what you will, Harry. But then one evening while Harry was under a magic spell she told me, Nite nite, pretty girl, told Sam he was a good boy and referred to herself as a sweet sweet girl. Strong magic!

I enjoy every single second of Harry's unexpected amity for as long as it lasts but I admit I am always suspicious, I know she's plotting something evil. When it's over, it's over, her fairy godmother feeds sour apples to her to reverse the original spell that bewitched Harry in the first place. The transformation is profound. This time my first clue that peace and harmony had ended and discord and chaos would again reign supreme was not from Harry herself but from my sweet, beatific little blue bird, Wilson! There he was sitting on his perch looking like an angel, in the sweetest voice possible he was repeating Harry's favorite two words in the English language. She was only able to teach my baby to swear because he's young and impressionable, what else might she have taught him? Sam was older when he met Harry, he never falls for her nonsense.

My second clue that the sweet spell had been broken was Harry's drill Sargent pacing. Angelic Harry comes out of her cage in a civilized manner with a polite greeting. Harry the Barbarian explodes out of her cage with switchblades strapped under her wings. She comes after me like a guided missile headed straight for my face, I've learned to duck, bob and weave to avoid being head smacked by an angry quaker. It infuriates Harry to miss her target, she then flies to the front of her play top and begins marching like a drill Sargent, swearing in time with her steps. She will wait for the perfect window of opportunity when she knows I'm not paying attention, then she will dive bomb me and screech in delight back to her station to enjoy her glorious successful hit, I know she keeps score. Sweet Harry takes treats from my fingers as gently as a butterfly and says, Thank You. Harry the Barbarian, snarls and hisses while trying to reach around the treat to snag an ounce of flesh. She flings the treat only to retrieve it later to launch it at me yet again. It doesn't matter what the treat is, when Harry's in a mood she hates everything.

Yesterday my three quakers were all having fun on Harry's play top and appeared to be getting along. Leave it to Harry to be the play ground bully, she ran at Wilson and head butted him. I moved Wilson to a safer place out of Harry's hot zone and profusely apologized for Harry's rude behavior. Let's face it, Harry's a danger to society. I left the room and a couple of minutes later I heard Wilson scream. I returned to quaker paradise to find the little green gremlin smirking at me with two blue tail feathers still dangling from her beak. Needless to say, the quaker queen spent yesterday's remaining time out in a time out inside her cage with her door closed.

Love this story, Allee! Harry's indelible personality shines through thanks to your elegant prose!

And, I have people tell me that Amazons are heartless mass murderers!

I think, I'm going to need to provide them this source.

Oh Harry! What a bird!

Thanks for sharing, I'm now enchanted with this bird!

Parrots
Jack - African Grey or is he a Red-tailed hawk

I know that particular demonic icon personally. My fear of winged demons arouse out of Harry's hellfighter head strafs....

Skeletal Ships buried dead in the sand,
Gales blow hard against taverns on land,
The old sailors sit, bathed in candlelight hue,
Telling tales of sirens and their sweet voices of doom.

Beware the black sea, where the tides roll through time.
Here they be monsters, here they be Harry, hungry in the air.
OP

Harry is legend! I'll probably never know exactly what I did to deserve Harry. Should I be honored to care for the vile creature?

I'll pass the compliments and happy thoughts along to Harry Dearest, she does enjoy messages from her fan club.

Skyrider, I don't know where you located that poem but it's a perfect fit for Harry, she's a siren!
P

Parrots
Jack - African Grey or is he a Red-tailed hawk

It come to me in a dream I reckon....
A NIGHTMARE!!! About Harry the heckler.
Lions and Quakers and bears...oh my!
I'll get you my pretty....and your little dog too!
(Evil laughter) Ha ha ha ha ha....

Allee said:
Harry is legend! I'll probably never know exactly what I did to deserve Harry. Should I be honored to care for the vile creature?

I'll pass the compliments and happy thoughts along to Harry Dearest, she does enjoy messages from her fan club.

Skyrider, I don't know where you located that poem but it's a perfect fit for Harry, she's a siren!
Click to expand...

Allee said:
Should I be honored to care for the vile creature?
Click to expand...

Absolutely! And Harry would expect nothing less.

And hugs for poor Allee!!
P

Yes indeed, that is a given. Was thinking of poor lil' Wilson who had feathers pulled from his butt ouch!

Yes indeed, that is a given. Was thinking of poor lil' Wilson who had feathers pulled from his butt ouch!
Click to expand...

Years ago,when Smokey and Amy would be out together,walking along the floor...Smokes would sneak behind Amy,yoink on her tail,then turn running back to her house,LAUGHING all along! What a brat she was to poor Amy,who just wanted to be pals

Oh, Harry! Such a trouble-maker, and yet so irresistibly lovable. But tell her to leave my boy Wilson alone! Lol!

As always, I enjoy reading of your ongoing adventures with your flock. You have such a way with telling stories, my friend.
You must log in or register to reply here.

A
Sick or hormonal?

F
Target Training - Quaker not getting it