So i want my green cheek (Spring) to convert to pellets as he has always enjoyed seeds. How Can I get him to start eating Hagen lifetime formula pellets? They smell fruity but as of now, he is digging through trying to find the half seed half pellet mixture

Good morning, GHOSTLY, welcome to the Forums to you and Spring!

Some parrots take to pellets straight away, some would almost rather starve themselves to death than convert over. I have had mixed results with two cockatiels. Many years ago when pellets were not so commonly used, my then cockatiel Kang resisted ALL ATTEMPTS and would definitely rather have starved than eat them. Of course it might have been my fault for not presenting them in the correct manner, but she never did manage to convert.

A later arrival to the flock, Twinkle, was almost as stubborn, and it took several attempts to win her over. What finally worked for her was that I crushed up the pellets into a powder using a mortar and pestle, and sprinkled that all over her seeds. This made it impossible for her to just sift through and eat only what she wanted, without getting a proportion of the crushed up pellets in every bite. It also got her accustomed to the different taste and smell. Et voila!! She was converted over to pellets in just a matter of days when she had previously fought every other attempt!

Other factors may be that Spring simply is not keen on the taste or smell of that particular brand of pellet, so it may also take experimentation with several brands before settling on one that he likes. But it's worth being persistent so don't give up!

Oh and don't forget to post some pictures, we love baby photos around here

I wish you the best of luck!
OP
G 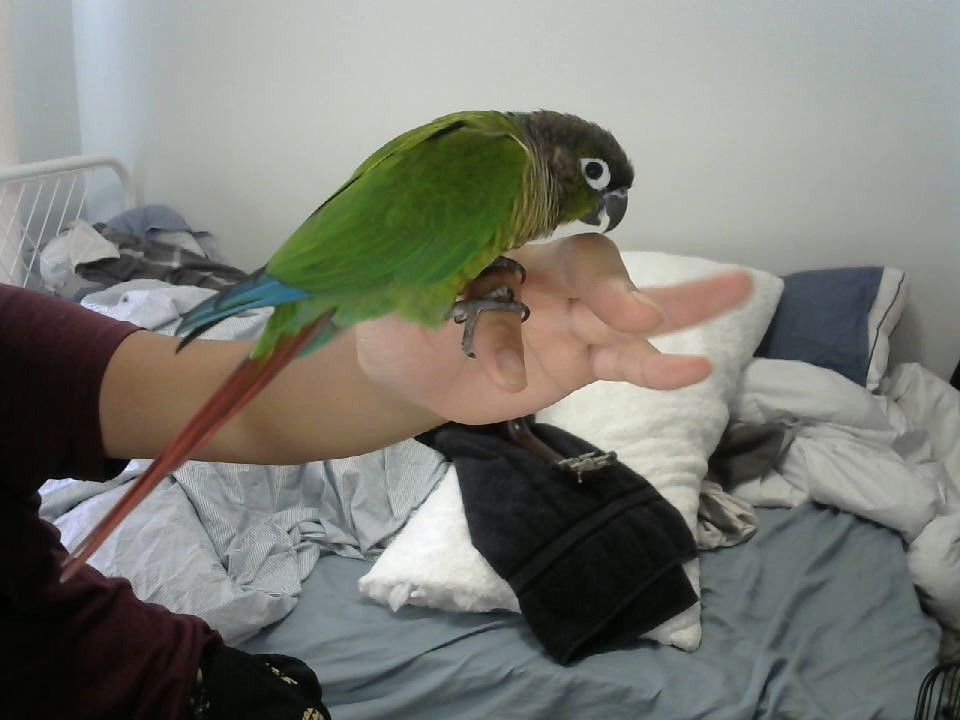 Here he is. Sadly he lost his mate during the heat wave here. Ill try crushing it up but the odd thing is I gave him one earlier and he ate it and went for more but seems to prefer seeds. Should I slightly wet the seeds and nuts and then add the powder or should I just add the powder to force him

Oh he's beautiful, and I'm so sorry for your tragic loss, that must've been so hard for both of you

I wouldn't water down the powder, there's really no need to. I just gave Twinkle her regular food with the powdered pellets for a couple of days, then over time I would add pellets that were still crushed but not so finely and monitored closely to make sure she was eating them. After maybe 10 days to 2 weeks I found I could replace her old food with the pellets and she was eating them like she had done so all her life! Mind you in her case she did have the added benefit of having our other cockatiel Fang leading by example, he had been on pellets from day one. Just keep a close eye and make sure that Spring keeps eating - if the powdered pellets are not to his liking he may not eat his regular food so you might need to start again with a different brand. It might also be a good idea to get a gram scale so that you can weigh him and monitor for any weight loss over this time.
Last edited: Aug 18, 2021
OP
G

Great! Let us know how you get on!

Very sorry Spring lost his companion during the oppressive heat. My condolences for a painful loss.

If grinding to finer consistency doesn't work, consider trying the Harrison's conversion protocol. Not pushing the brand but their technique should work for most any pellet. Total success with my flock in two weeks: https://www.harrisonsbirdfoods.com/using-our-foods/large-bird-conversion/
L

Parrots
Had a sun conure. Fed her too many pine nuts. She already had a sinus problem. Nuts are too rich for birds. I or 2 max. It's like dairy for people. The nuts make mucus in the birds too.

If she won't eat the pellets I always put harrisons mash and mix in spiralina capsules into that for the greens. My birds love it . My princess of wales flys on my counter just to eat that out of the container.
You must log in or register to reply here.

Going from soaked seeds to chop and pellets.

P
How to get my cockatiel to eat fruit