I'm worried if my new Quaker is sick

Hello
I bought a new blue Quaker just yesterday night. He/she is 3-4 months old, unweaned. He is pooping diarrhea (maybe bcuz of hand feeding formula), is sleepy most of today (slept late 2 am and woke up at around 10:30; so only 8 hrs of sleep), wing started to slightly droop, kinda fell not completely but a bit of a stumble? on the perch, posture was bad for a while, sort of a horizontal way, noticed he sometimes opens his mouth just slightly maybe bcuz he has trouble breathing, and he poops lesser than yesterday.
The problem is, I don?t know his usual behavior, do birds of 3-4 months of age perch well(his last owner gave us a box with bedding on the bottom so I suppose he hasn?t been in a cage)? He can fly pretty good tho. Is he sleepy bcuz of the lack of sleep? How much of these symptoms are because of a new environment? Should I wait for tomorrow so he might get better bcuz he?s more used in his surroundings? He pooped vEry often yesterday so is it bad that he?s pooping less or good? He?s preening himself rn he looks more energetic but he?s been clumsy on the perch. His body seems so close to the perch sometimes. I?m obviously worried and I need advice.

I hope the images open I tried using iCloud link

Hello,
I see you are concerned about your new Quaker parrot and are seeking help, but I must add that although not too sure where you reside but I could have sworn that it is illegal for breeders to sell unweaned parrots in the US. Not only that but your problems that are being mentioned in your post are likely due to the root cause of your baby parrot being unweaned.
When a bird is unweaned, they are not fully or close to being independent for their basic survival. Feeding themselves, drinking water, even standing stable on a perch. And with the fact that he or she is facing a completely new environment, they can still be nervous. So all in all, the fact that they?re unweaned and with seeing they are in a different place than what they?re used to, it makes sense why they would be like this on the first couple of days.
Now to address your questions.
Since you last saw him in a box with bedding, it is likely that he hasn?t been used to perching or standing on his own.
Parrots should get 12-14 hours of sleep so he could be sleep deprived and as a baby, it?s important they get enough rest. Even in adulthood.
The symptom of diarrhea could be due to multiple reasons. It could be due to nervousness and that?s why u see the watery poops. Or it could be from the formula he?s been consuming. It depends how many times he poops in an hour or day so I cannot really tell if less poops mean a good thing or bad thing. It could be good if he was pooping way too many times yesterday or it could be bad if you see there are barely any stools at all from yesterday, if yesterday?s poops were at a normal amount and frequency. The symptom of sleepiness could be most likely due to the 8 hours he got last night or possibly underlying illness, but this can only be determined by an avian specialist. He probably got nervous from being in a new home and didn?t get as much rest in the night so that could be something.
So to answer your question, the diarrhea, drowsiness, and even frequency of poops could be due to new environment but then again, the droopy wing, lack of balance, poor posture, and respiratory struggle could be signs of some possible illness from what I know.
Parrots no matter as babies or adults need time to adjust and lots of it. It?s not really an overnight thing so my advice would be to keep checking on him by observing his body language, be patient as the weeks progress and if possible, please see an avian vet nearby or even if you have to look a little far. If he?s preening and is a bit energetic that is a good sign but parrots are inclined to hide their illnesses so please get him or her checked out for any underlying health issues. Babies are also more vulnerable to sickness and could easily get ill. Hope this somewhat helps you out.
OP
A

Thank you very much for letting me hear an outsiders opinion. I have a few bird vets but I don?t know if they?re certified. It?s 9:37 pm right now here and I think I will keep him in a warm room and let him sleep and check up on him later. I?m scared to leave him alone only to see he?s gotten worse but he needs his time to adjust here and rest. I hope it isn?t a very serious disease, even if he has one.

Hello azra! I'm so sorry you are going through some worries with your new baby, there is no worse feeling in my opinion.

As a general rule of thumb, it's a good idea to have any new addition health checked by a certified avian vet where possible whether illness is suspected or not, in order to get a baseline on overall wellness and to nip any potential nasties in the bud. The following link may help you to locate a specialist in your area...

I wish you and your baby quaker all the very best!

I'll add this to LaManuka's excellent suggestion and link above. Ran across it a while back...
Certified Avian Vets
https://abvp.com/animal-owners/find-an-abvp-specialist/

Good luck.
And good for you, for reaching out!
I'm glad you're here! 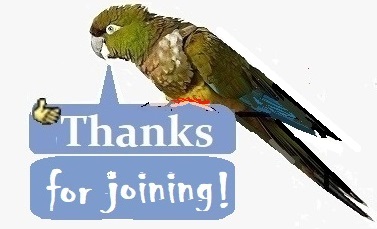 F
HELP: My cockatiel is sick

New bird is sick, what will the future look like for my bird?
2