Hello. I would like to introduce my flock and myself.

My name is Mikey Arris. At the moment of writing I am 51 years old, retired and living in the Netherlands. I discovered this Forum in my search for information on Amazon parrots. It is one of the many sources I found and after reading many posts and comments I feel "safe" to become a member. I write 'safe' because I have the experience, especially on dog owners forums, that reactions to people's posts are often unkind. But not here, at least as far as I know. It's important to me.

So. My flock started with Timmy. At that time he was 6 years old. He is my neighbour's African Grey. They adopted him from an aquantance and asked me, who they preceived as a big animal lover (have had dogs all my life), if I would like to take care of their bird whilst they went on holiday. I said yes, and they rolled him in his cage to my living room and I looked after him for a couple of weeks and got bitten by the "bird virus". 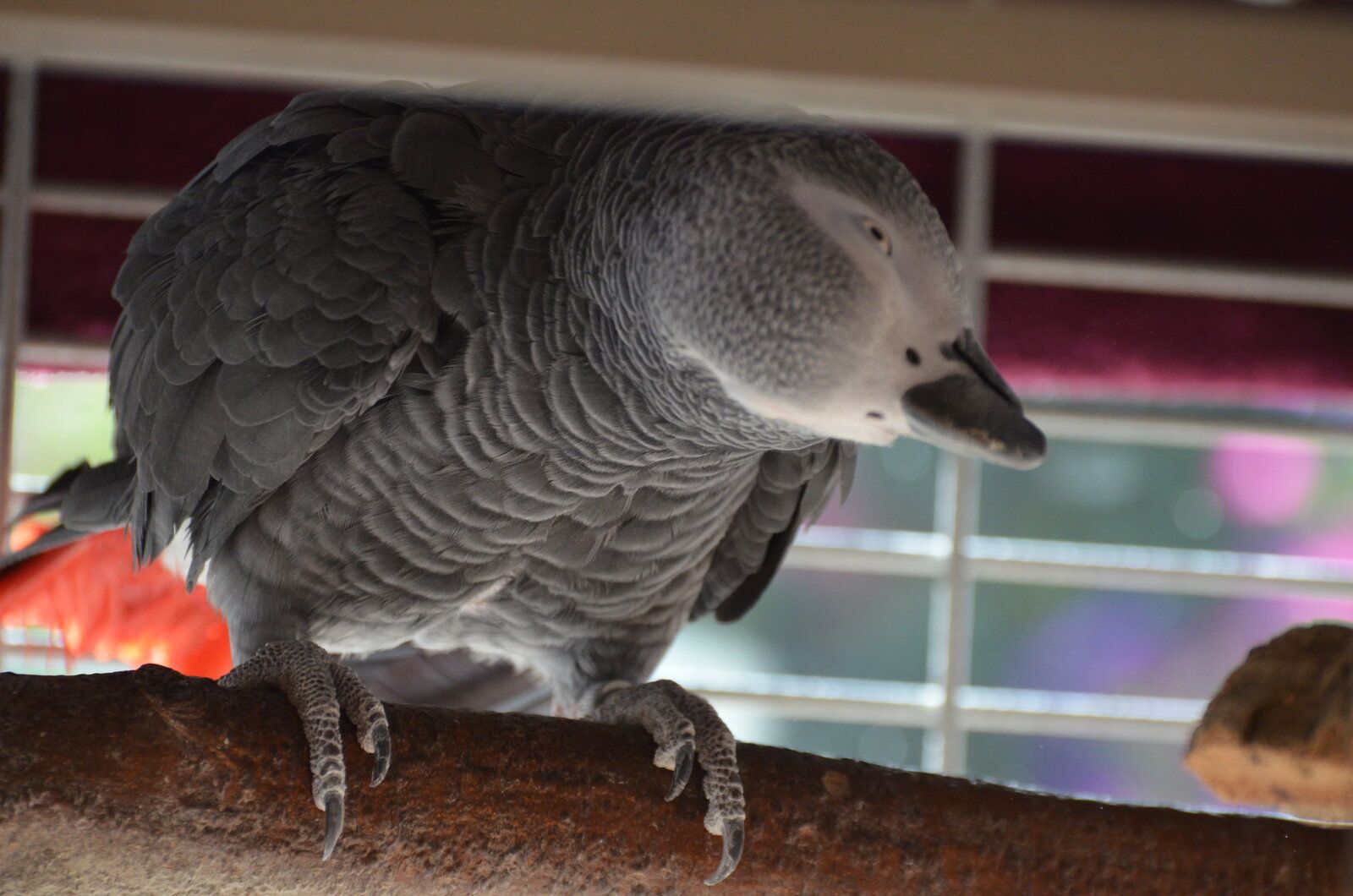 A couple of months after my first birdsitting job I contacted a local bird shelter and asked if could adopt a parrot. Hadn't made up my mind about what kind of parrot. Just, a parrot. I visited the shelter to see if any of the parrots they had for adoption clicked with me and one of them did. 40 year old African Grey, Tjakko. He was handicapped pretty badly on his legs and couldn't walk or fly, just sort of crawl. And he was pretty stiff all over. But he had a good grip in his feet and could climb and move around in his cage pretty well! For a while I tried to get him out of his cage with all sorts of tricks, even lifted him out of it, which usually resulted in a serious bite. He did let me scratch the back of his head whenever I or he liked it. He was just happiest in his cage and I always left it open should he decide to come out. I put the cage next to my chair and we chatted, whistled, laughed and had a good eight years together before he died. 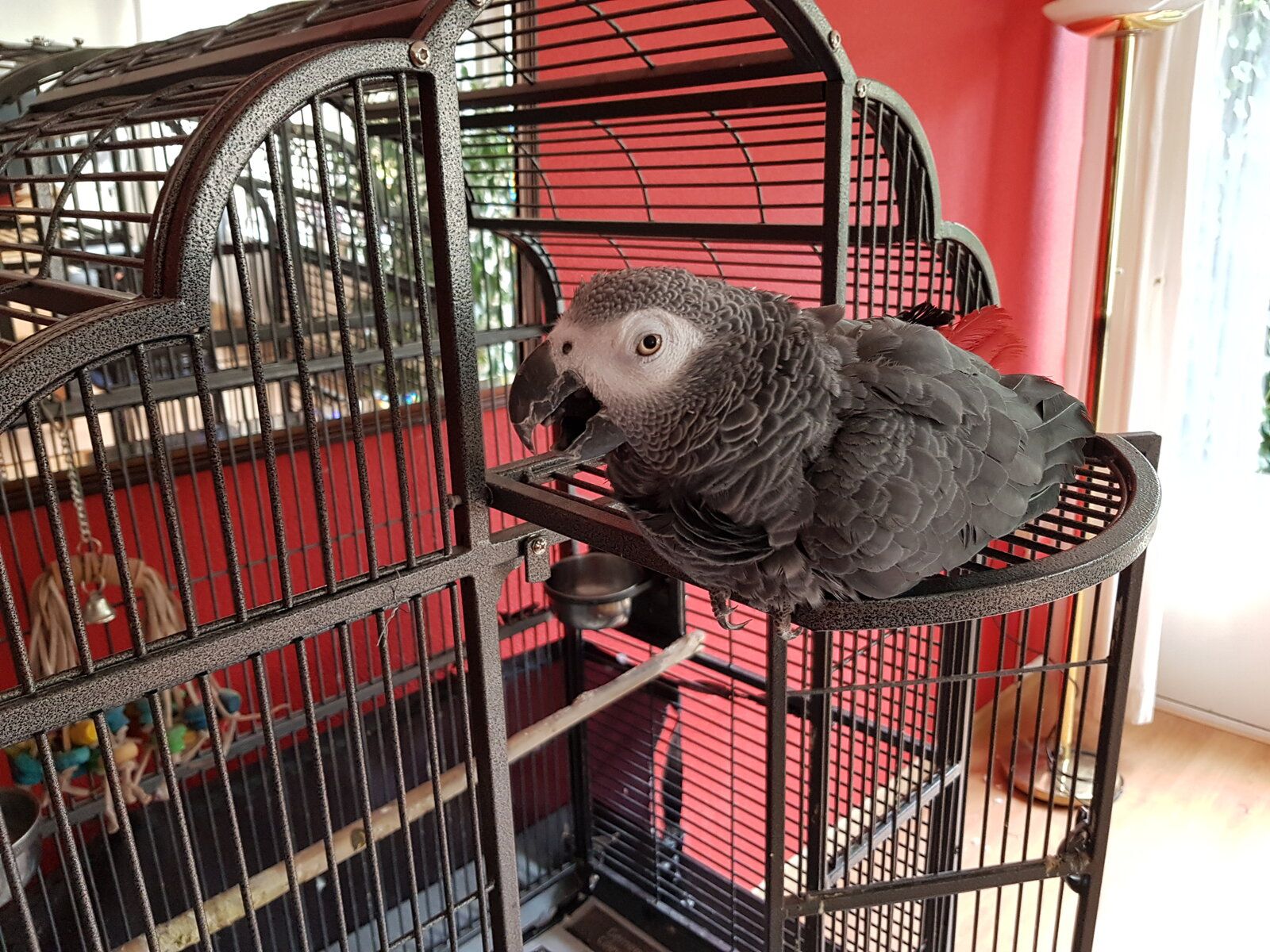 A few years after I got Tjakko, my neighbour offered me a young cockatiel which came to live with me. I called him mr. Wiggles. He was such a sweet bird, became very tame and was always with me, on my shoulder, on my head when I did my afternoon nap. Sadly after about a year, in a moment of inattention I walked out of the house with him on my head. He flew into a tree and I never saw him again. I did get a new cockatiel, called her Lotje. And got her a girlfriend called Potje. And they're pretty good friends. 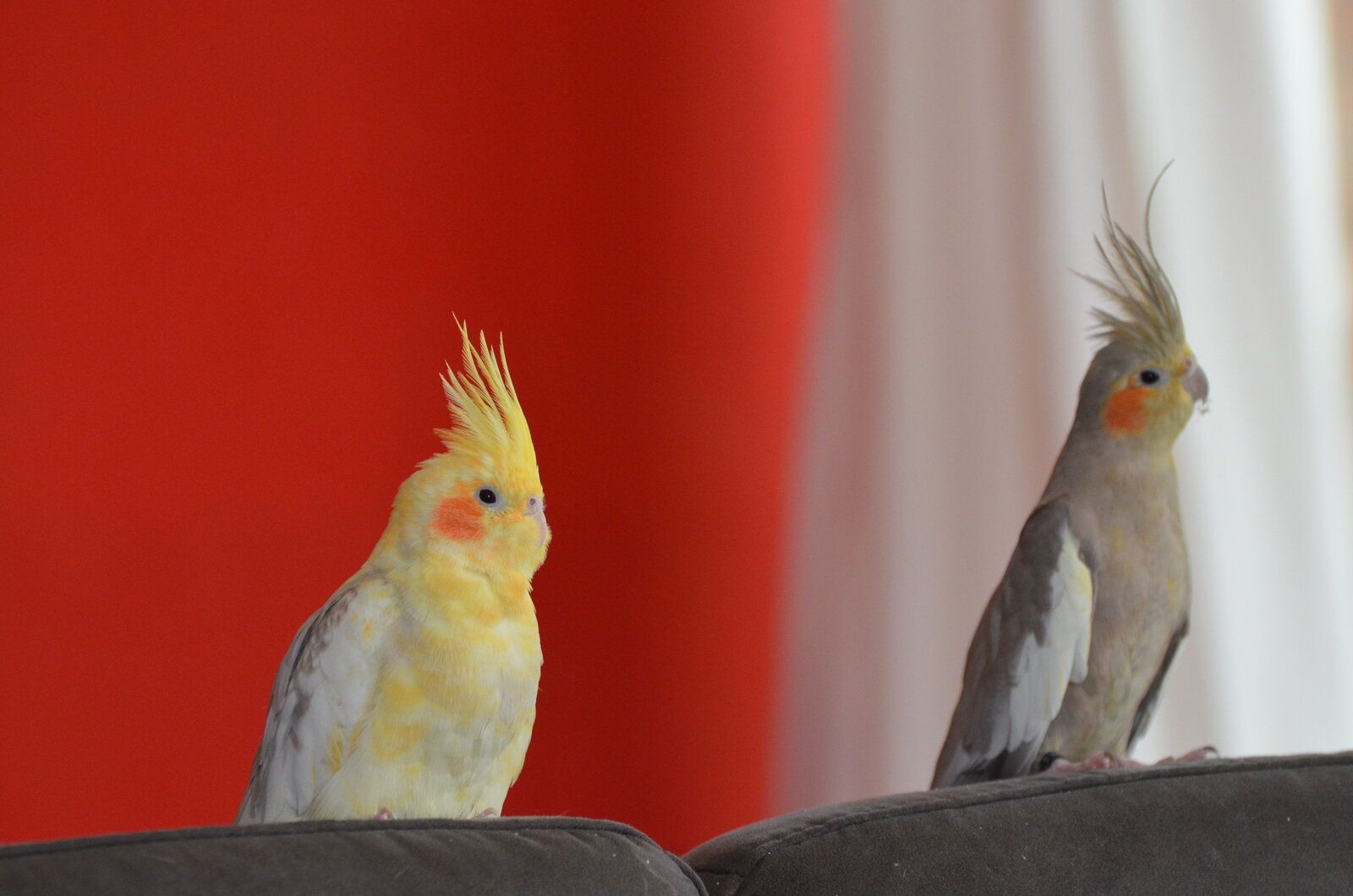 I also got some canaries. My oh my, they are a cheerful and happy bunch. I have 8 of them. All cages are open between noon and bedtime so it's a bit of a zoo here with the birds, my two dogs and a few guinea pigs. All get along really well. Though I put Chico in his cage whenever I'm not around. And it is Chico that got me started on my search for Amazon information. After Tjakko died it took me a few monts to search for a new parrot and it lead me to Chico! A one year old Amazon of unkown sub-spiecies (so far). I think he's beautiful and very sweet, though after all I've read about Amazon behavior, a typical Amazon ;-) Sweet, happy but also a bit naughty and feisty! 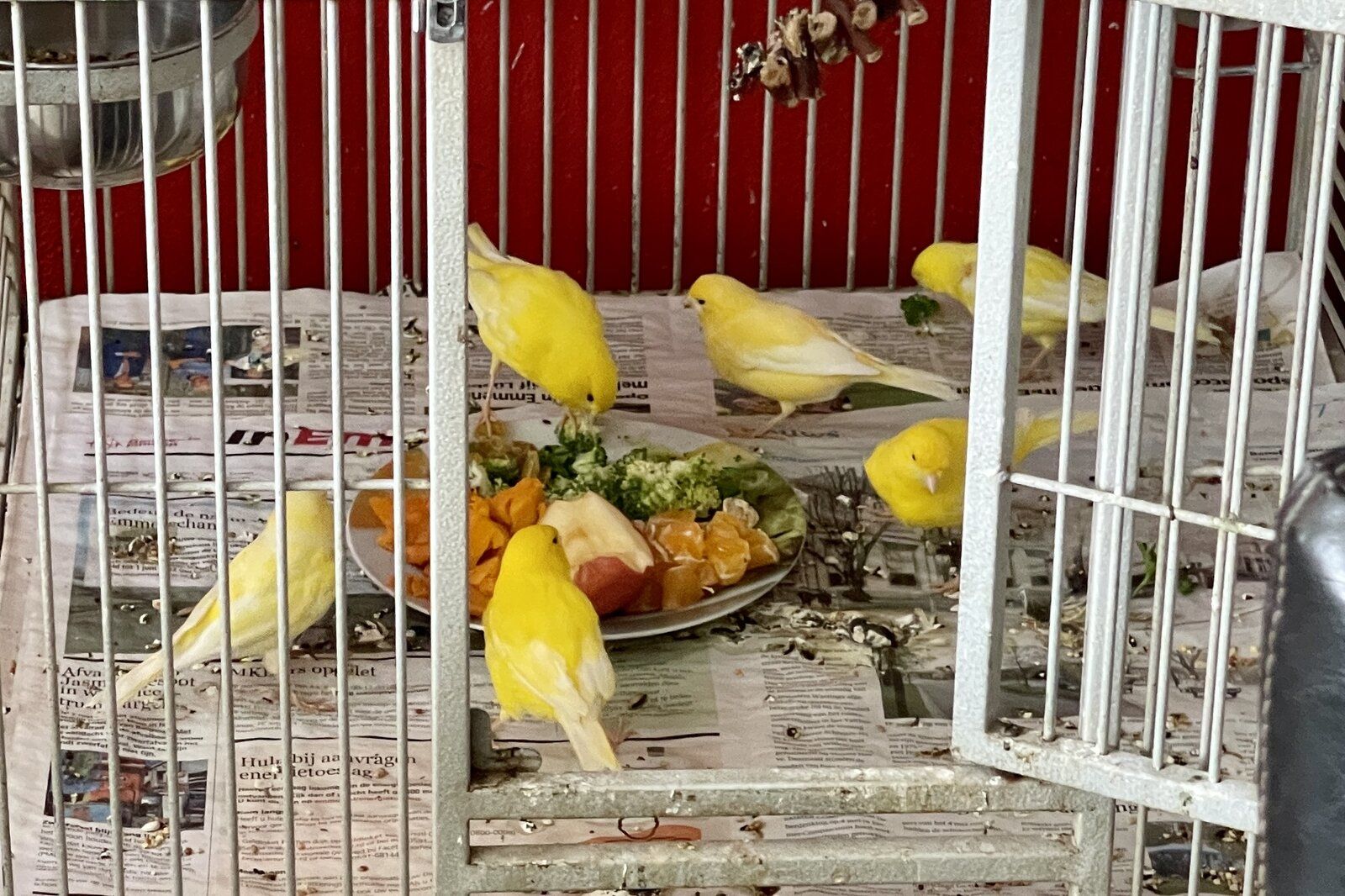 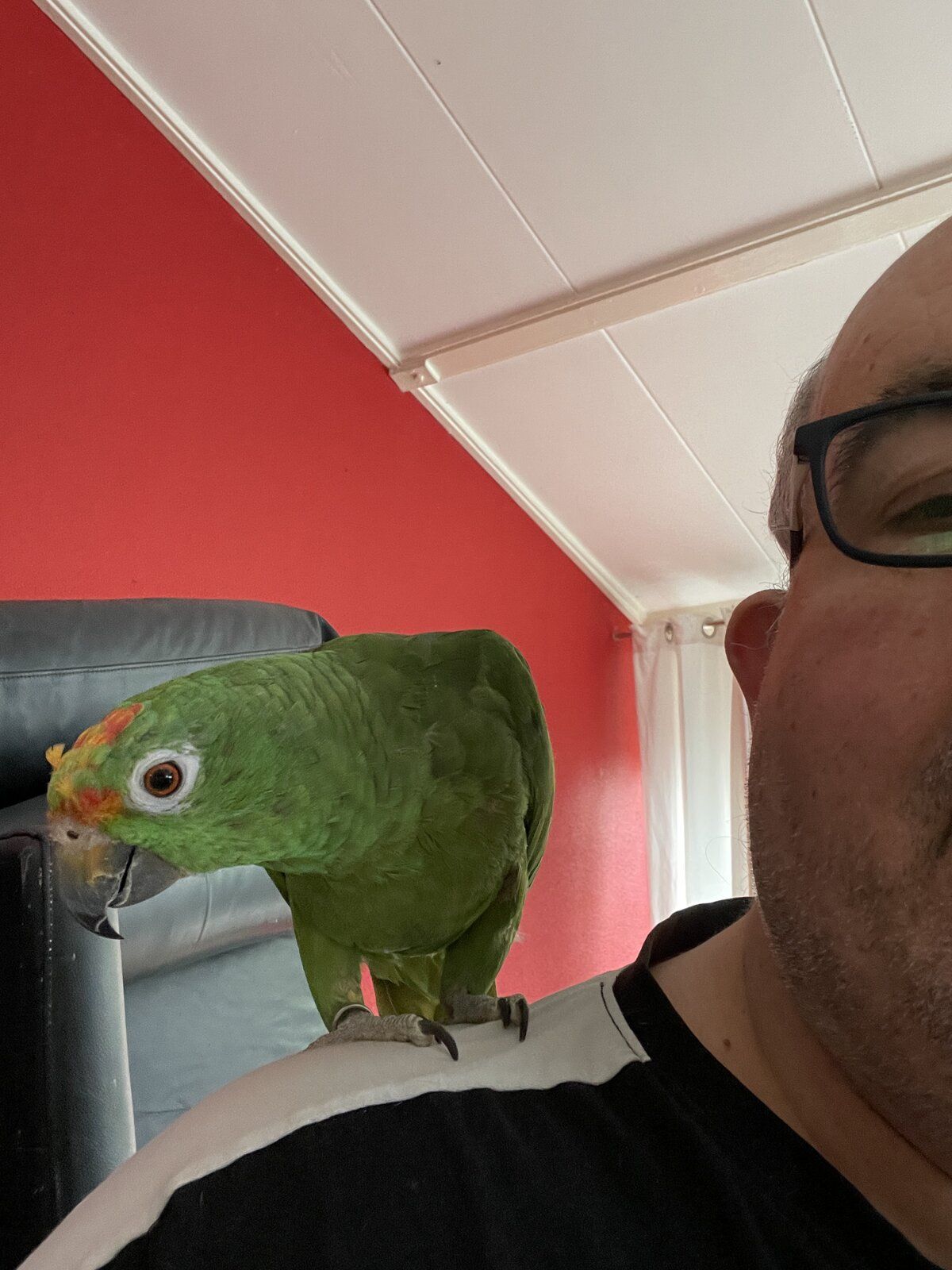 I hope this story wasn't too long. And if you read this far, thank you and good meeting you!
Mikey.

Welcome to you and your flock!

I think Chico is a hybrid between two species of amazons

Welcome to the forums, Mikey and your diverse flock, I enjoyed very much reading your introduction and it's good to meet you too! We do pride ourselves on being one of the nicest corners of the interwebz here, so I think you will find yourself right at home here Welcome aboard!!

Welcome to the forums Mikey! Nice to meet you and your flock. Thank you for this introduction. I enjoyed reading it. You won’t regret joining this forums, it’s one of the best things I did in my life. It’s the forums of kindhearted people from all over the world

Rozalka said:
Welcome to you and your flock!

I think Chico is a hybrid between two species of amazons
Click to expand...

Thank you for the welcoming words!

I really have no idea. I studied a lot of pictures on posters. The only one that really came close to Chico was of a very rare species. And that sounds unlikely to me. It's the Blue winged Amazon
OP

eman said:
Welcome to the forums Mikey! Nice to meet you and your flock. Thank you for this introduction. I enjoyed reading it. You won’t regret joining this forums, it’s one of the best things I did in my life. It’s the forums of kindhearted people from all over the world

Thank you! Thank you for reading and your kind words. I can imagine the good things it does for you and other members, and non-members of course.

Parotteer said:
Thank you for the welcoming words!

I really have no idea. I studied a lot of pictures on posters. The only one that really came close to Chico was of a very rare species. And that sounds unlikely to me. It's the Blue winged Amazon
Click to expand...

Welcome and be welcomed, Mikey. Wait for your 'zon to fully mature and get his adult plumage, I;m sure we can nail his species down then.
OP

Rozalka said:
I'm sure, he's not a blue winged amazon - it's prob a "fake" species. The description was based on just two birds and there are no evidence they were wild, no more blue winged amazons seen. Probably these two birds were hybrids too
Click to expand...

yeah most likely you are right. Still I'd like to know which two species ;-)
OP

wrench13 said:
Welcome and be welcomed, Mikey. Wait for your 'zon to fully mature and get his adult plumage, I;m sure we can nail his species down then.
Click to expand...

Wonderful, would love to find out. Thanks for the response!

Welcome to you and your flock!
I loved reading your intro, and bless you for giving Tjakko such a wonderful home for his last 8 years. You let him do what made him comfortable, what a gift that was to him.
Your canaries are gorgeous, and I love their veggie plate!
Lotje & Potje are also beautiful, her colours are spectacular.
Last but not least, Chico is a stunning Amazon!
I'm so happy you found us and decided to join our forum family
You must log in or register to reply here.

O
Sam Has A New Home

Is this way of playing with my parrot okay?

S
A little bit of advice for my new Indian Ringneck