It's been a whirlwind 1 1/2 years since she arrived so I figured I'd catch up on her birdie album.

I grew up with chickens, dogs, cats, and even at one point a myna bird. I always wanted a large macaw but never in my life imagined I would ever get to be owned by one. You never know if the person you end up with will be just as crazy as you! And really, he wasn't. He didn't really want any type of bird. Which is why it surprised me one day when he agreed to get our youngest a little budgie or a cockatiel. We went window shopping and researching like crazy. I didn't want just any bird from any old pet store or breeder. I wanted a healthy one from a good place.

Then it happened. We were in a bird store one day and got to hold a baby amazon. I had no intention of even considering anything beyond a cockatiel...until the hubs said "How much is the amazon?" My jaw dropped. For him to even consider getting anything larger. It quickly escalated to "Ok, let's get a macaw". Thus began the many many many months of researching and finding a good breeder.

Choosing the B&G macaw was fairly easy after researching temperament. We LOVE cockatoos but we read they are amongst the neediest. The African grey (timneh) was in the running, but I had read, too, that they tend to bond easier with 1 or 2 people in their lifetime. We wanted a bird that would have no problem bonding with our entire family. After reading the temperament of a B&G, we knew that was the right one.

I ended up here on PF at some point after we found a couple who had a B&G baby being hand raised. I knew I'd get the lecture because who does crazy stuff like get a freaking macaw that can bite off your finger as a first bird?? LOL. But I got the support and advice I needed from you guys, so thanks!!

We went and met Kass! We got to see her parents, too. They have this gorgeous room with windows for walls where they kept 3 pairs of bonded birds -- 2 amazons, 2 B&G, and 2 scarlett macaws (they've had most of them for over 20-30 years). Those birds were so well loved by the couple (who were horticulturists by trade -- beautiful huge orchid farm!). It would be another maybe 2 or 3 months before we could bring her home while they weaned her and made sure she was healthy and eating properly. 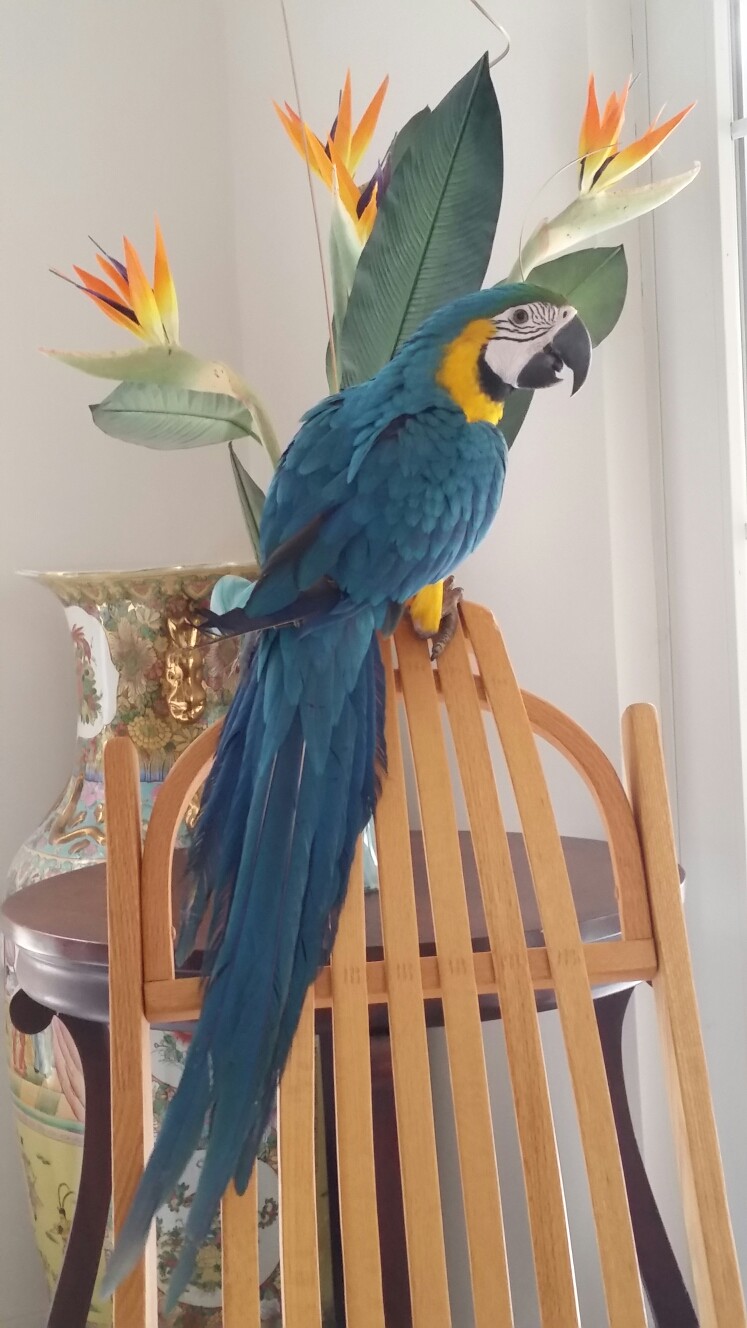 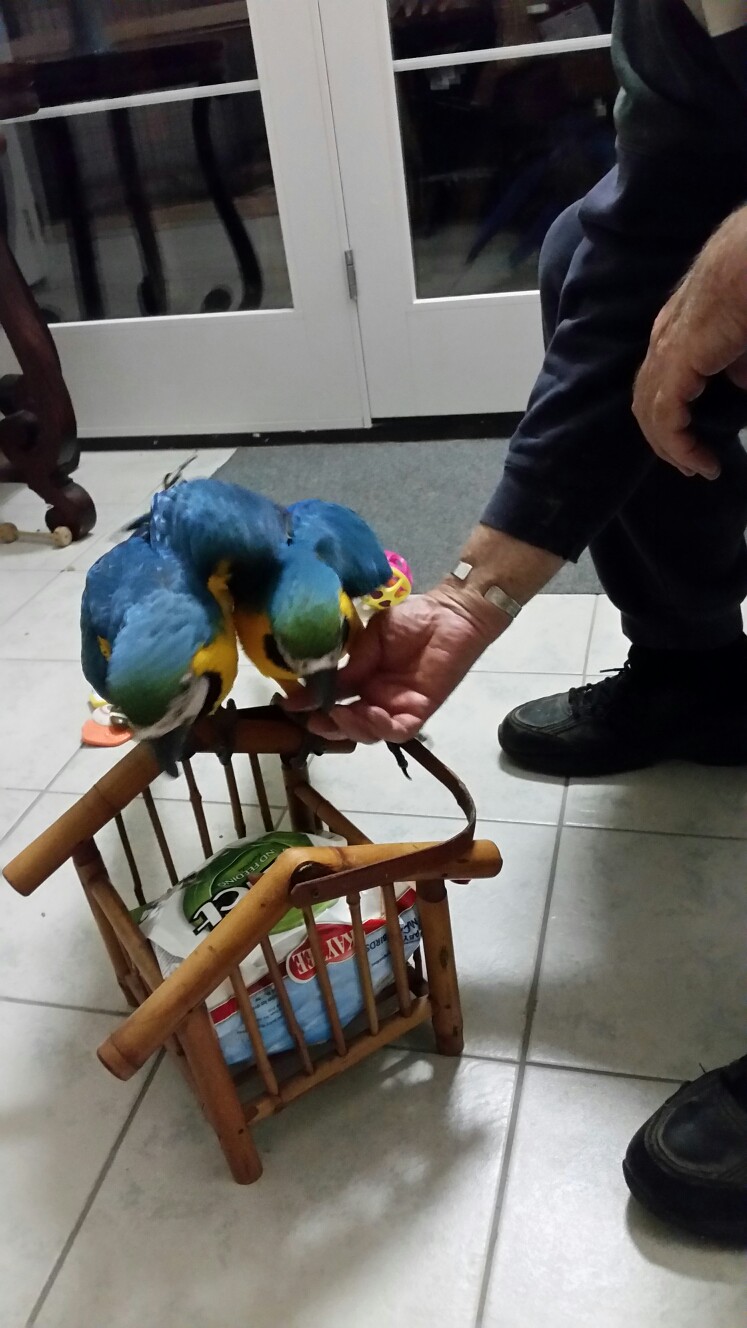 We think Kass is on the left: 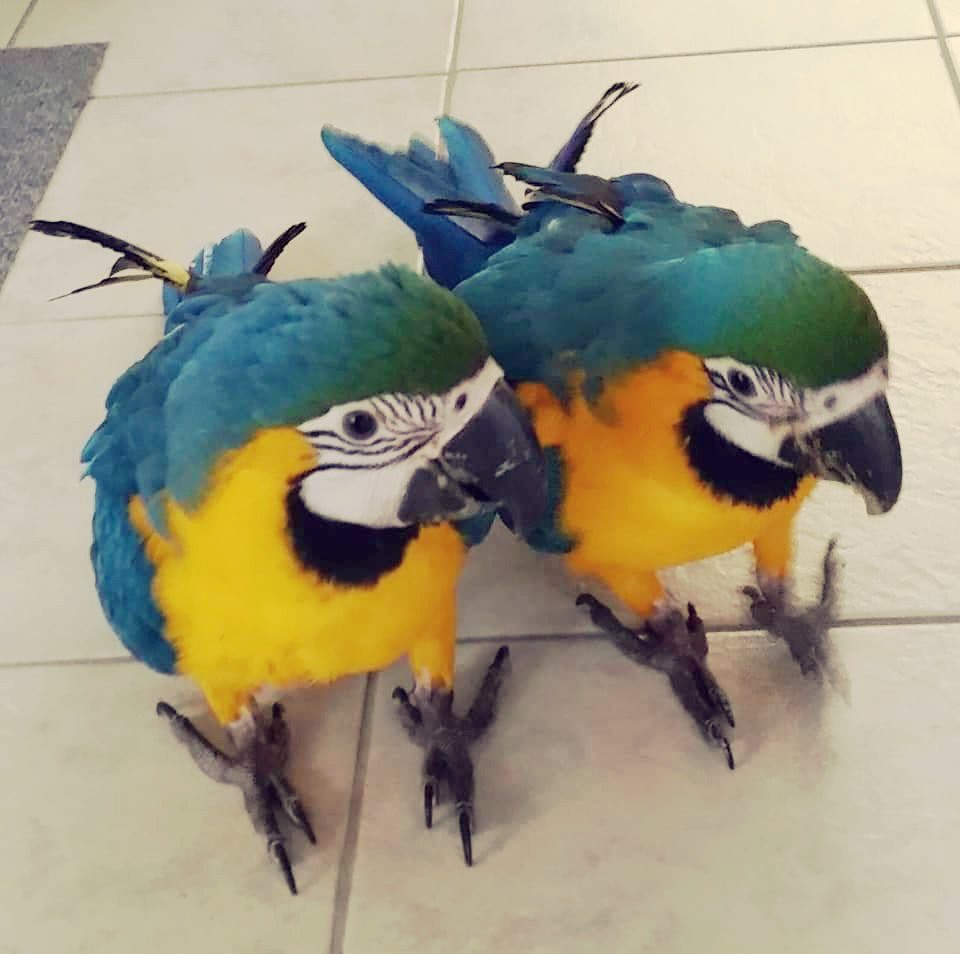 This was her and her sibling in their cage. The parents were in a larger cage nearby just out of picture range. 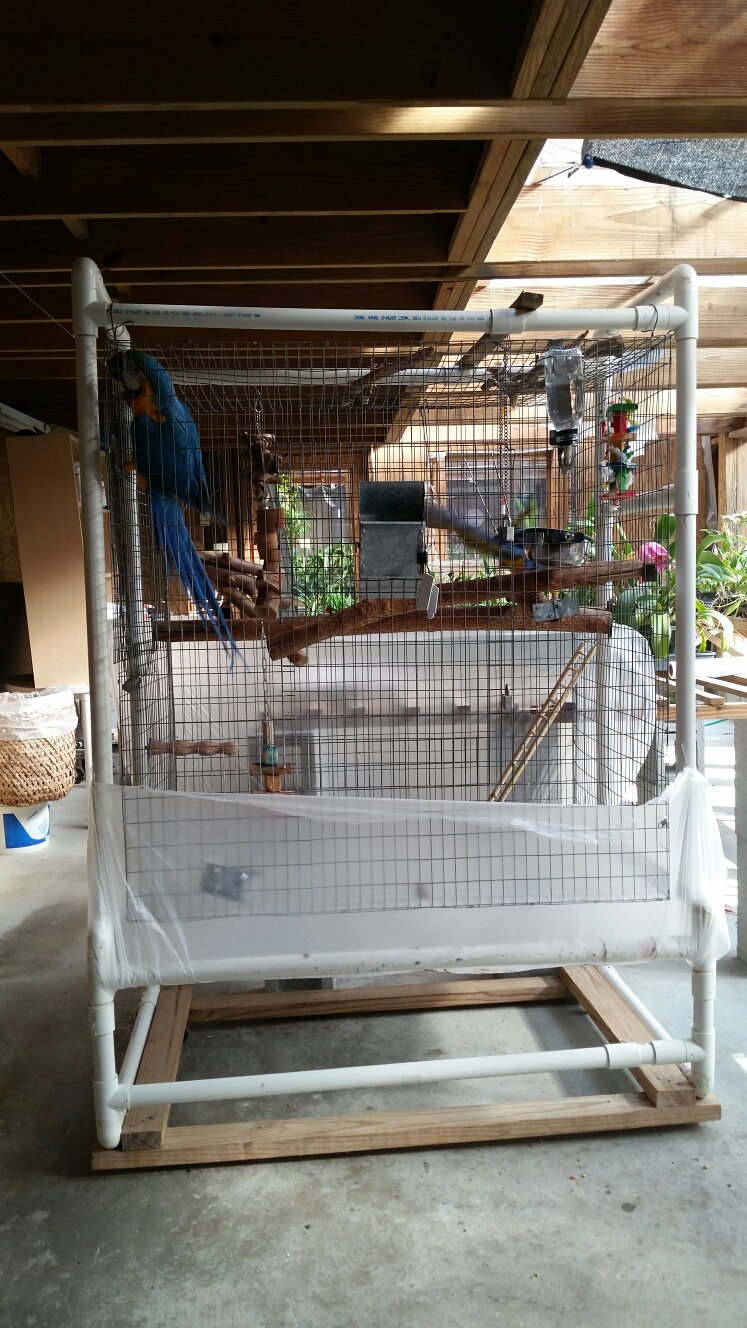 Her first picture at home: 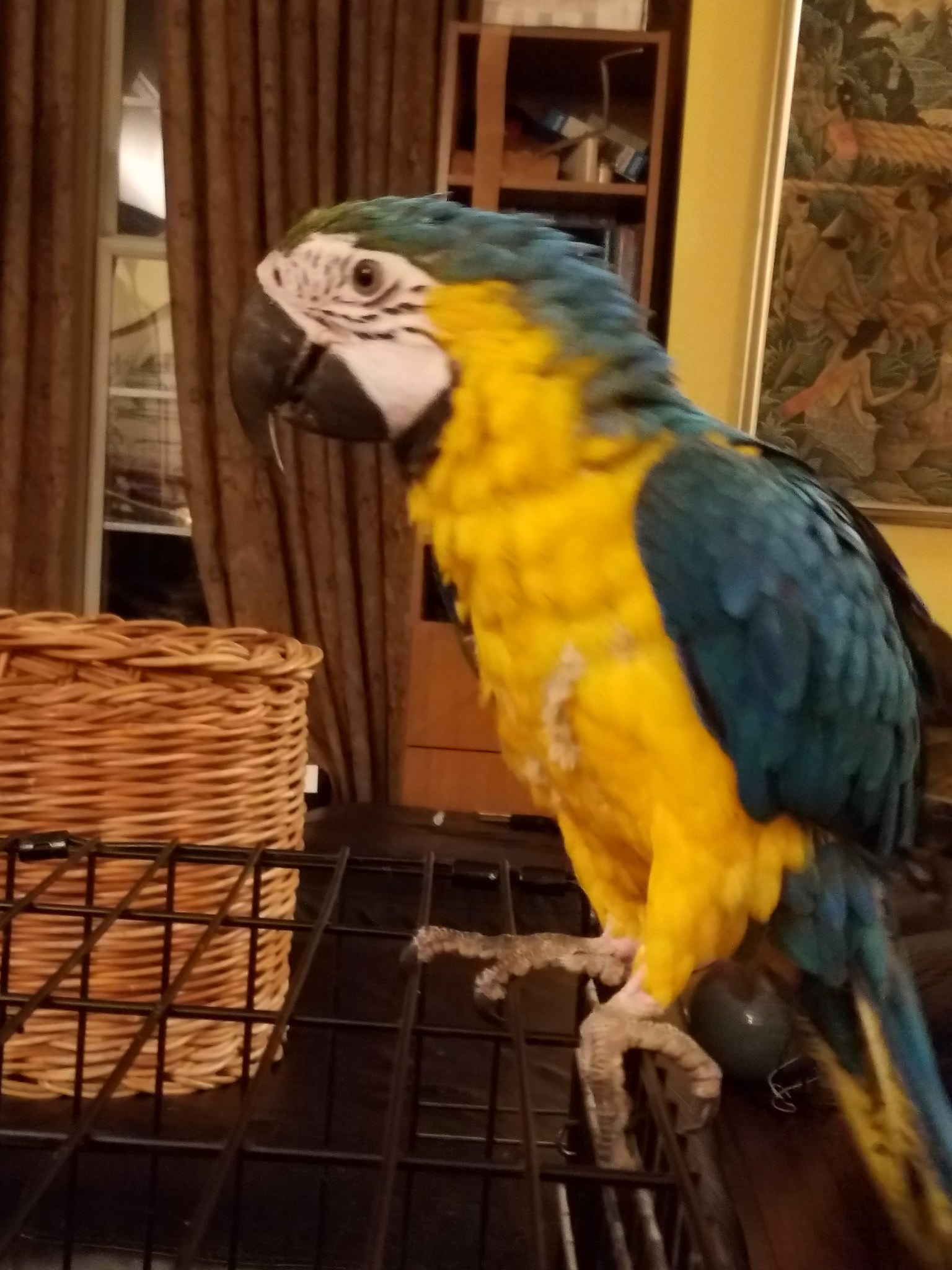 First time in her new cage: 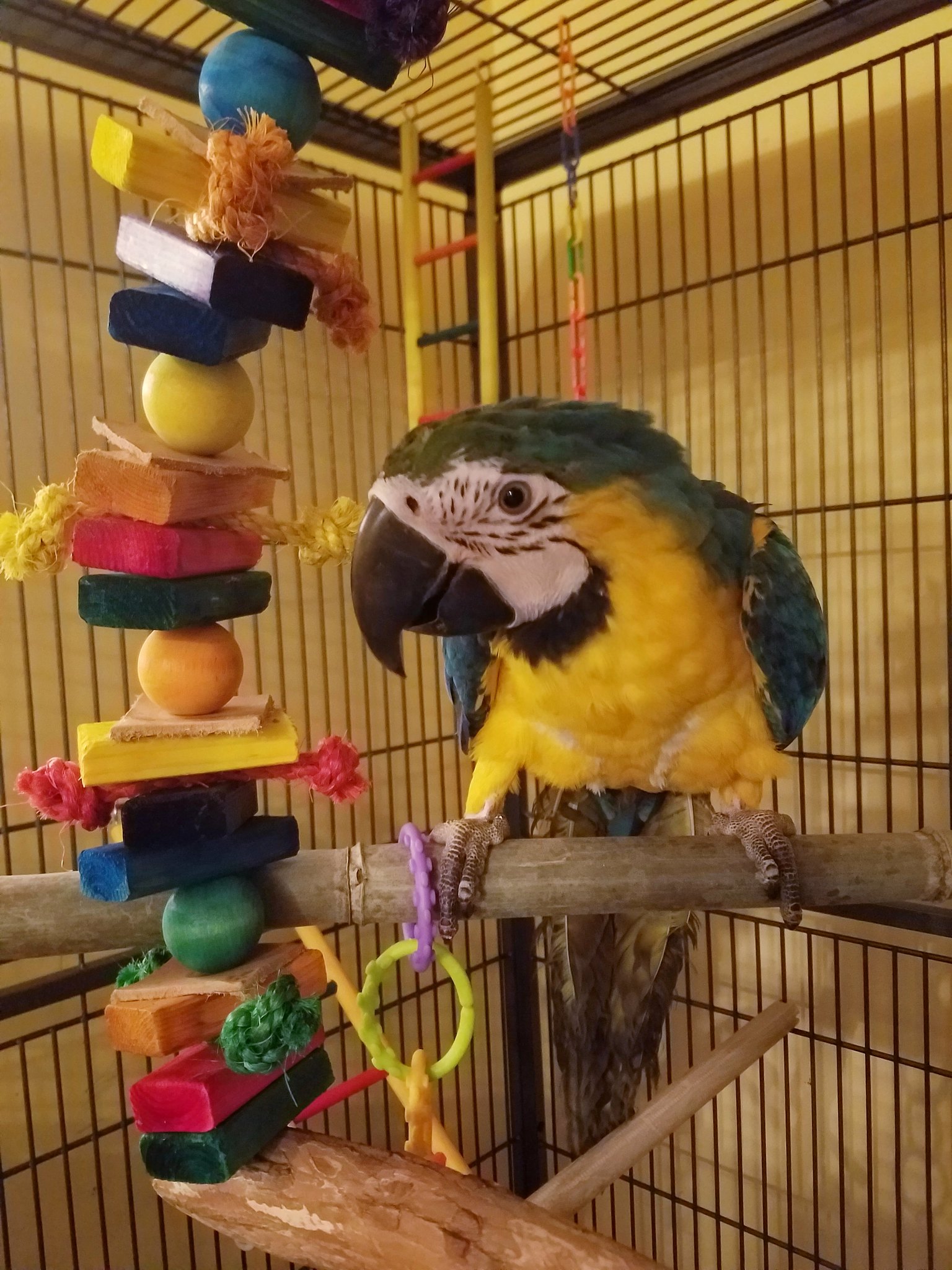 First time with the vet and flirting like crazy! 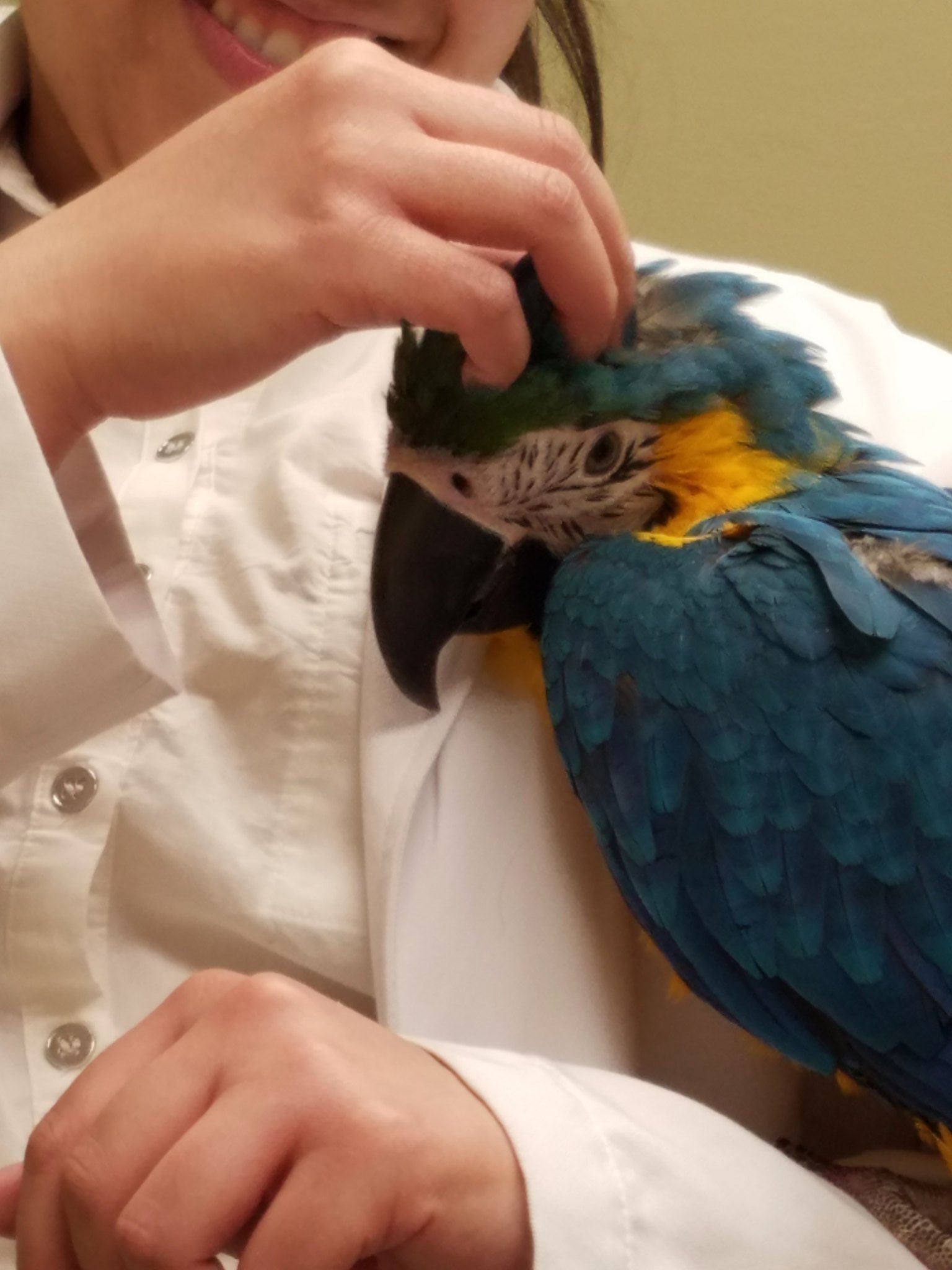 After her first ever shower! 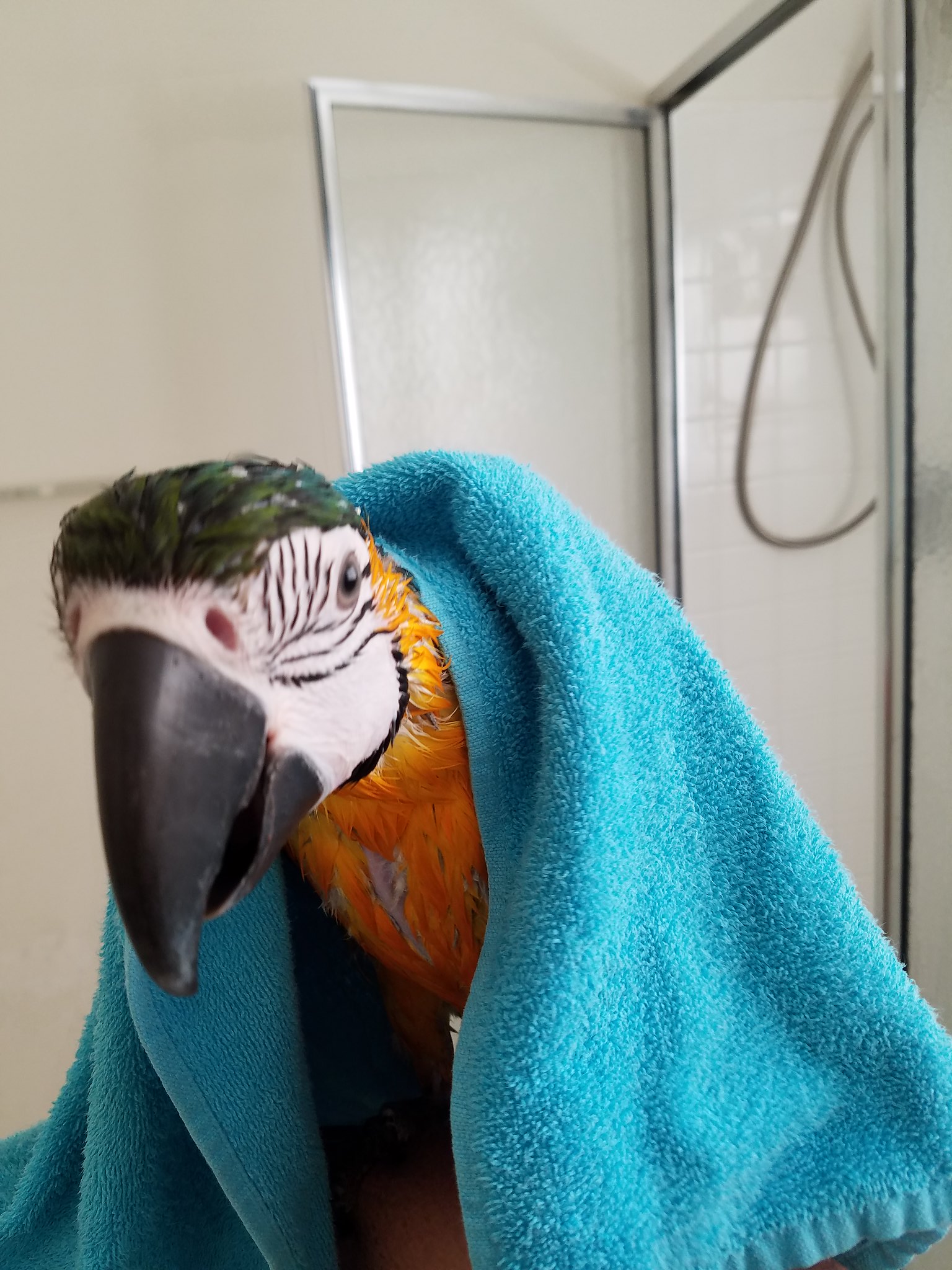 Anyway, looking forward to the next several decades with her!

Lovely story and pics, you and Kass are off to a great start!!

Thanks for the update and beautiful pictures. Kass is one adorable baby Looking forward to hearing more of your journey together as it unfolds.

Sent from my SM-G950U using Tapatalk

What a gorgeous baby and beautiful family album in the making. Looking forward to sharing in your journey with Kass!

Oh she’s beautiful! And might as well jump in with both feet (after well done research). No such thing as a started bird!


Sent from my iPhone using Tapatalk

Threads like this are a GREAT way to document your journey with Kass. I go back every once in awhile to read Saltys 119 page thread, just to jog the memory of what he was like in the last 5 years. Dont be afraid to post even mundane stuff, as thats the good things you want to remember years from now. Looking forward to your!
OP

wrench13 said:
Threads like this are a GREAT way to document your journey with Kass. I go back every once in awhile to read Saltys 119 page thread, just to jog the memory of what he was like in the last 5 years. Dont be afraid to post even mundane stuff, as thats the good things you want to remember years from now. Looking forward to your!
Click to expand...

Oh yes. Many many more pics, videos, and stories to come. I just wasn't allowed tooi post more pics in one post lol Im picking out my faves and will post more soon.

Here are some videos of Kass:

And a few pics! 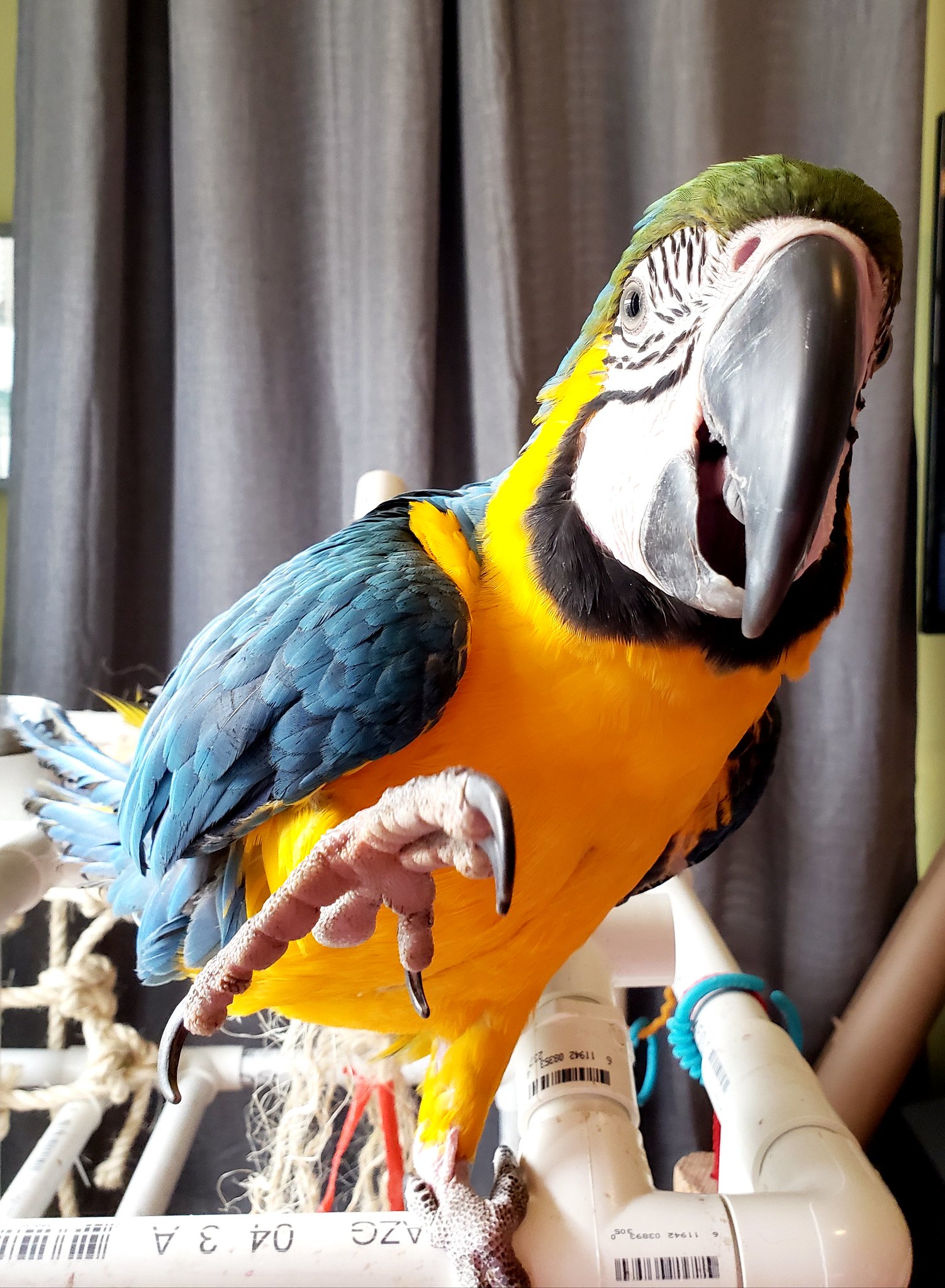 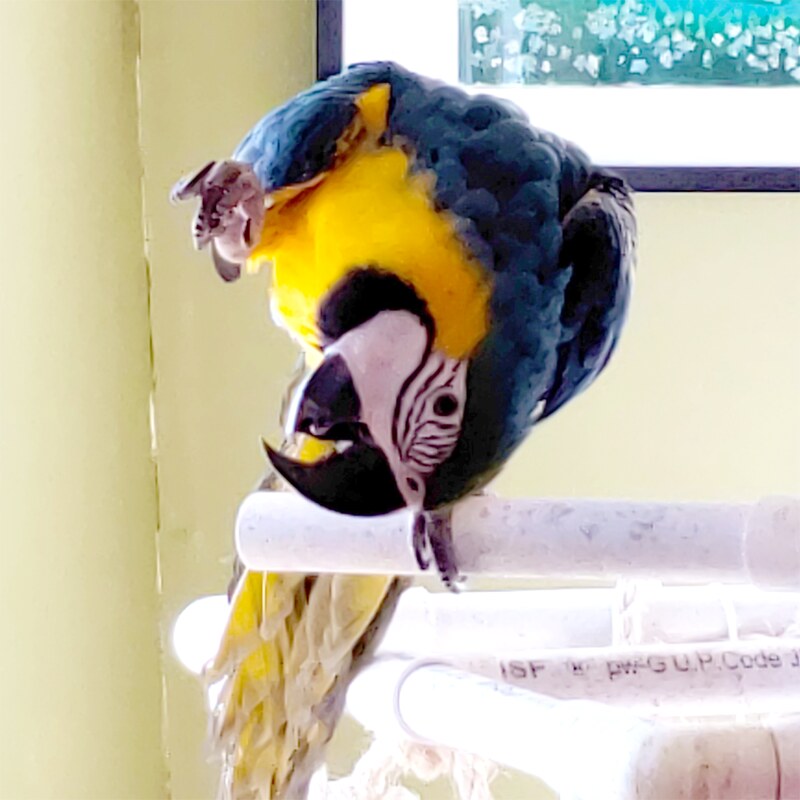 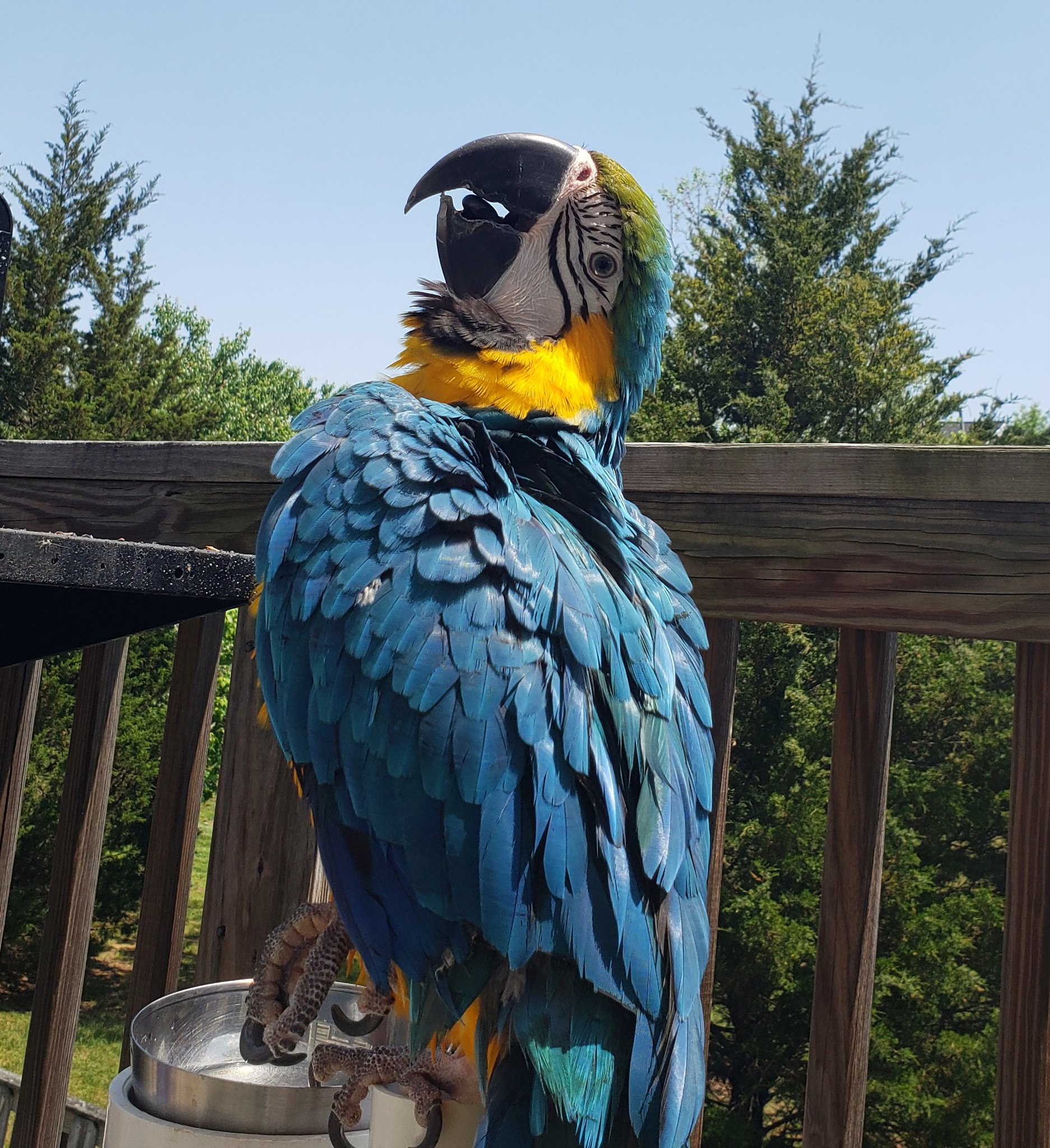 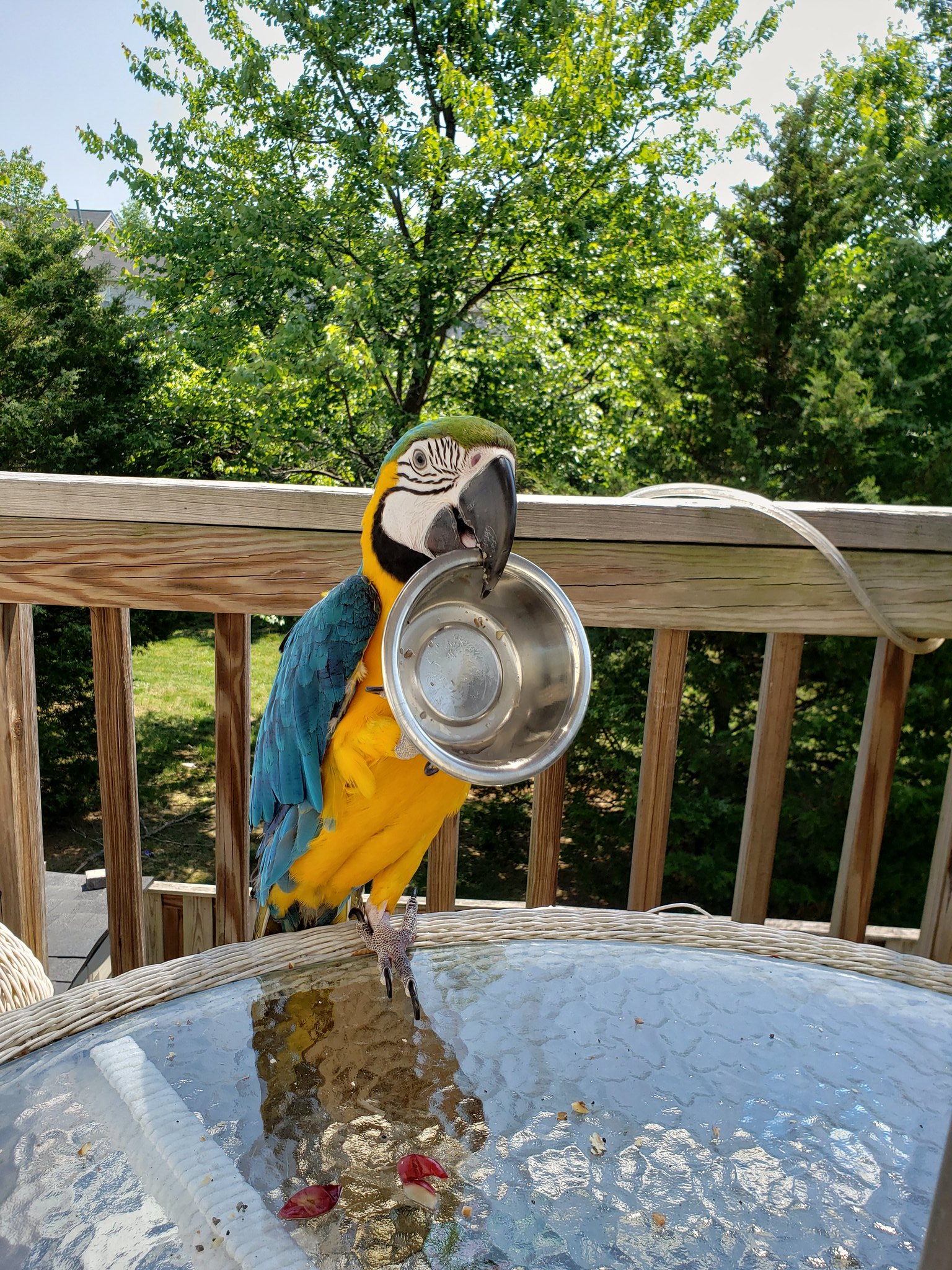 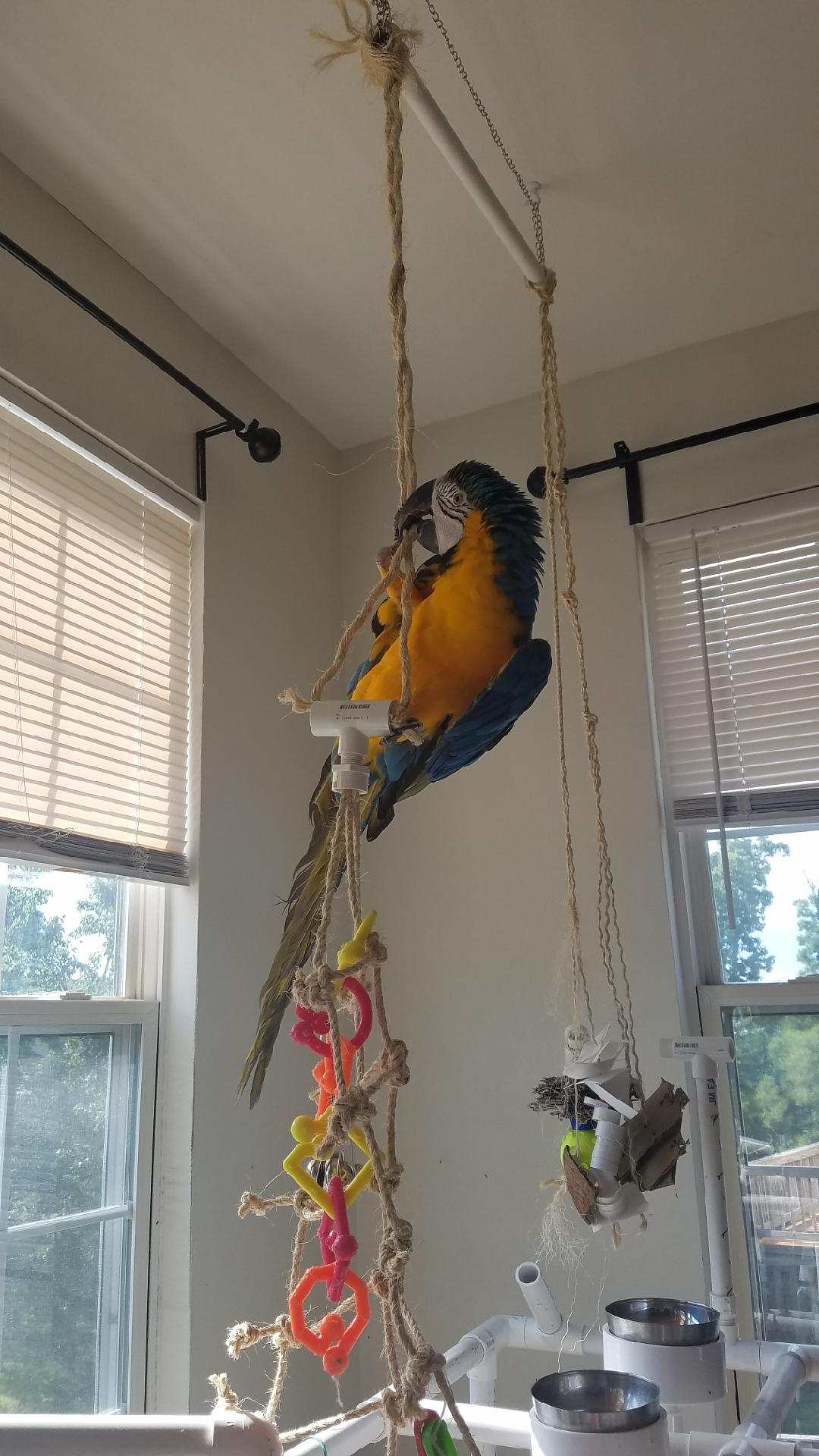 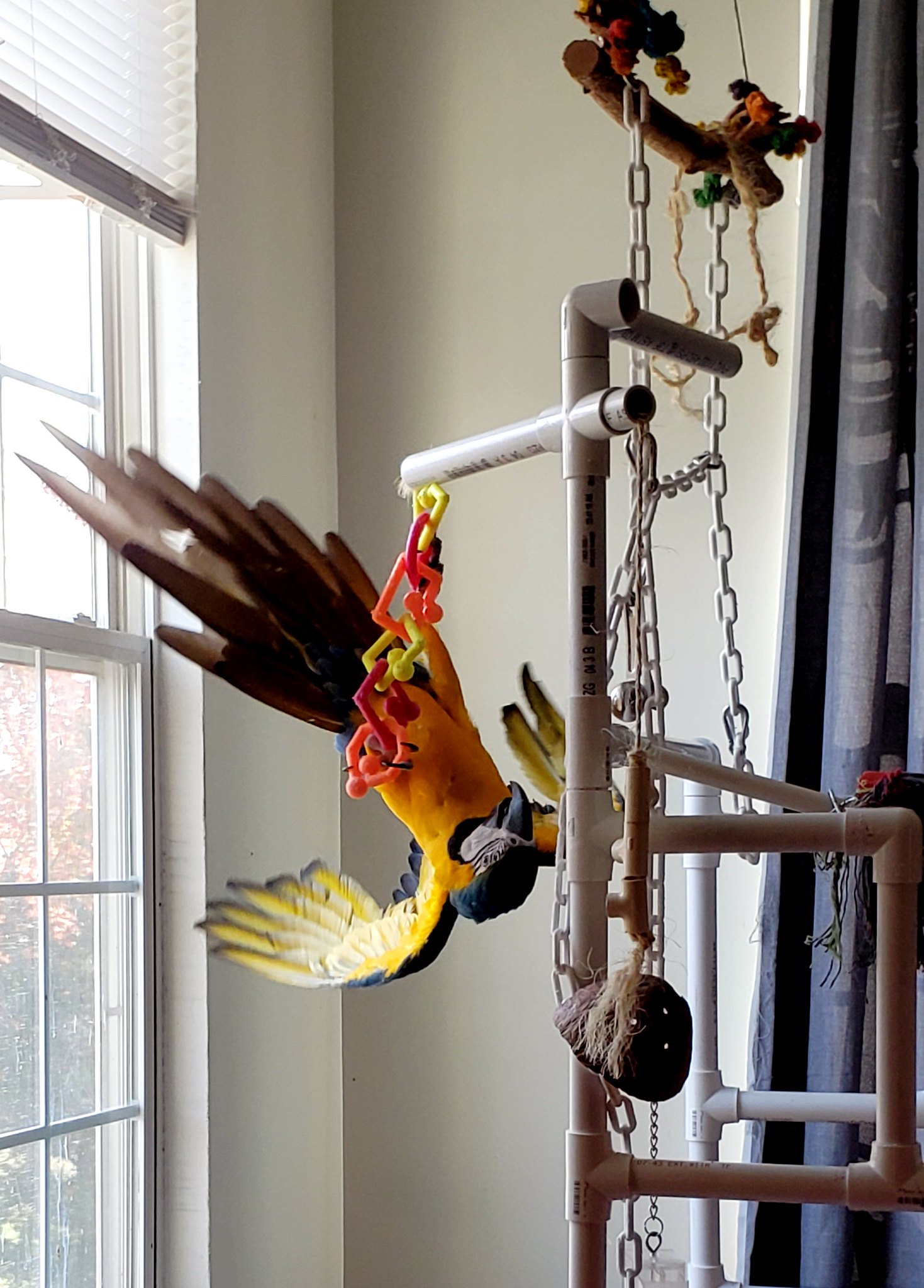 Kass be like "I can help build my cargo net!"

N
Banging cheeks against the bars

I’m happy to be here.