I have three scarlets. They were two pairs but I unfortunately lost one male (silly bugger flew hard into side of cage )

Im just wonderin if anyone can confirm that one is definately a scarlet? I'm just wondering as she is bigger than my other two, stronger, and definately meaner! Shes the youngest and she spends her time in the nesting box amd chasing both the male and female around the cage and they just ignore her. I am planning on seperating them, and I was looking into finding her a mate, but just wanted confirmation that she definately is a scarlet before getting another one..

Also, do you think a new single male would be ok? Or would she be likely to chase him away also? Shes about 12 months old 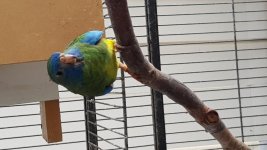 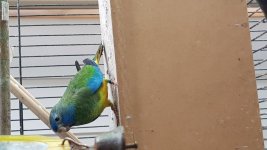 Yep, HE is a turqouise parrot
You must log in or register to reply here.

Kea and the hidden camera

Z
Hi! I am new to the parrot forums.

R
im not sure if my conure is unwell or not

Friday at 2:41 AM
Linda lee
L
E
How do I find a mate for my rainbow lorikeet?