Ok I'm too lazy to create separate threads for all my birds. So I'll post their journeys, stories, and updates here.

(Introduction)
I always wanted a bird. I had a senegal and some budgies in the past, but they passed away. I had an ekkie but my parents rehomed him to a trusted friend.

With lock-down and Covid 19, I was really lonely. My whole life was upside down. I needed a friend. And Jeff just happened to be that friend.

We went to a pet store to buy him. This wasn't a good pet store, there was way too little food(only seed to make it worse), dirty water, and too small cages. I really didn't like the conditions, even though I knew little about bird care. Neither did my mom like it. But we bought a budgie there anyway. The guy caught him with a fishing net by catching him and pushing him against the cage(HIS WING WAS STICKING OUT!!) After that, I bought some budgie seed and brought him home(he was put in a paper bag, sadly here in SA a lot of pet stores do it. He was also terribly clipped, the guy didn't even try to do it neatly.) I think he plucked his feathers because for the first few months there were no feathers under his wings.

At first he had a small cage. We eventually got a bigger cage when we got John(more about John in the next post.) So they shared a cage for the first few months. Then snowy came. Jeff was SCARED(yes, scared) of Snowy when he first saw her(more about her story in a later post).

Ever since I got him, he had a breathing issue. When I brought Snowy to the vet I told her about Jeff and she gave me some meds but they didn't work. She said if they don't work it's likely seasonal, and she asks if he sneezes more in certain wheather I told her usually when it's colder he struggles more. So we assume it's seasonal.

Unfortunately he doesn't trust me anymore. I think it's because either he was forced to because he was clipped or because when I had a YouTube channel long ago I made a video about things you do that can make them lose trust in you and instead of finding photos/videos online I used him as an example

(I did terrible things like forcing him to bath(I didn't notice that I don't have to harm my own birds to teach other people not to. Please don't get angry at me, I didn't know better and I already feel very guilty) Or maybe he just suddenly disliked me because he has bird friends.

I'll share some of his old pics when I use my PC.

John's story
~~~~~~~~~
Shortly after getting Jeff, my younger brother wanted to get a bird, too. At the time I didn't want it to happen, but I'm glad it did. Jeff and John bonded very quickly.

John came from a slightly better store than Jeff. Although the cages were small, they still had some toys and cleaner conditions. Recently, I saw the petstores use natural sekelbos wood! So they take decent care of the birds.

In the cage, there were two females that looked almost like this(the blue and yellow was more scattered and the budgies were whiter) 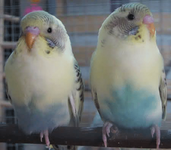 And then there were another two(three?)green guys. My brother wanted a very specific green budgie, so we had to wait 10min for the lady to catch the right budgie : /

So then he was put in a box, and we brought him home.

When he met his friend(yes, no isolation because I had no idea it was important

none of my birds were isolated, except Griffen who didn't interact with the flock for a few weeks), it was love at first sight. They became best friends at that moment.

At one point, John had mites so I just bought pet store stuff to apply on his nose and "isolated" him. It worked, but I think a vet would've helped more.

You aren't so lazy - I am VERY lazy - I have one thread for all fids too but I didn't introduce them in such details However honestly - I don't find anything intersting to write so much about all my fids.

Oh you remind me of tofu she came from a very bad place and she has issues if sky goes out of her sight or she cant see here she freaks out (multiple times sky came to us while we're eating and tofu didn't see her that she was with us she went to the kitchen every room in the house she freaks out) she even gets startled from the smallest of things sometimes when i blink she gets started shes always in alert mode always tofu most of the time ghosts me she just loves birds the only time she doesn't is treats i remember when kiwi and hope came she got so happy and just fell in love with kiwi she would even fight sky if she got near kiwi tofu loved her so much and that time she ghosted me a lot even if i give her treats and i understand she was treated so badly by some humans and now she has this mindset that humans are BAD and birds are GOOD. i honestly dont blame here about that.
OP

Flock update: the budgies seem to be slightly confused and frustrated, probably because Jeff is gone. I do hope he comes back.

The worst possible thing happened Jeff is gone. He flew away. They were outside and I didn't fully close the cage door. I will ask my mom if I'm allowed to add personal contact info example email, city etc I'm just so anxious right now

I have been noticing that Pipp has lost a lor more feathers than usual, I hope it's just a rough molt.
OP

Oh yes om nom nom Reminds me of sky after she eats anything she staines all her floof that is beside her beak messy girl i guess!!!

A beautiful example of flock life! Sharing a meal
OP

I ordered some TOP's. Birds kinda like them, still trying to convert them.

Pipp sleeps without tucking her head away. Is this normal? She has never done it, even as a baby.

PippTheBananaBirb said:
Pipp sleeps without tucking her head away. Is this normal? She has never done it, even as a baby.
Click to expand...

Yes, maybe he decided to change his sleeping position

Maybe. She never did it though. Maybe it's a lutino thing?

PippTheBananaBirb said:
Maybe. She never did it though. Maybe it's a lutino thing?
Click to expand...

Mutation has nothing to behavior

My Bourkes weren't tucking their heads away at all at the beginning, now they sometimes do it

Hm, come to think of it, I've only seen Keiko tuck his head a few times in the winter. Usually he's just squat and poofy with one foot disappeared

They're finally trying the TOP's. There was only powder st the bottom of the bowl left. I threw them in a container(I plan on using those for birdie recipes) and gave them some seed to eat.

PippTheBananaBirb said:
They're finally trying the TOP's. There was only powder st the bottom of the bowl left. I threw them in a container(I plan on using those for birdie recipes) and gave them some seed to eat.
Click to expand...

That's great news! I had to trick my budgies into eating pellets by putting them in their seed mix, and they still don't eat them all!
OP

For those of you wondering, "Okay, why is this anti-pellet bird owner feeding her birds TOP's?"

Wellll- I'm going on vacation(no choice) and I want the carer to take care for them easier. Plus I think giving them about 50-50 ratio of dry mix and TOP's is ok.. TOP's have a lot of goodies in that are hard to find here in SA plus they're organic. So TOP's help a lot. It'll still be only 20%- of their diet.

I wish Harrisons was available here but it's not at least TOP's is.
OP

"Brrrrr, it's COLD! At least Sunny makes a good heater." 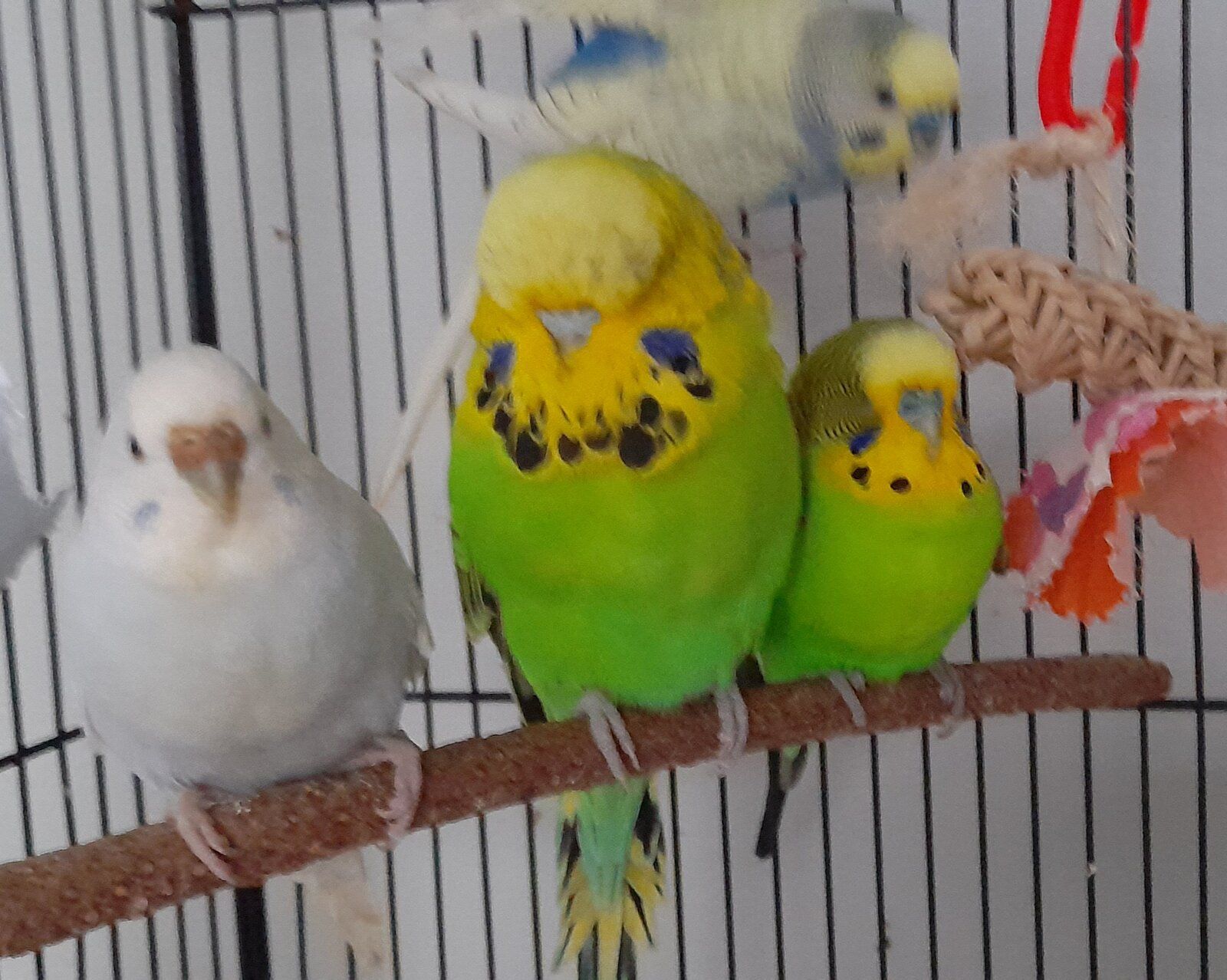 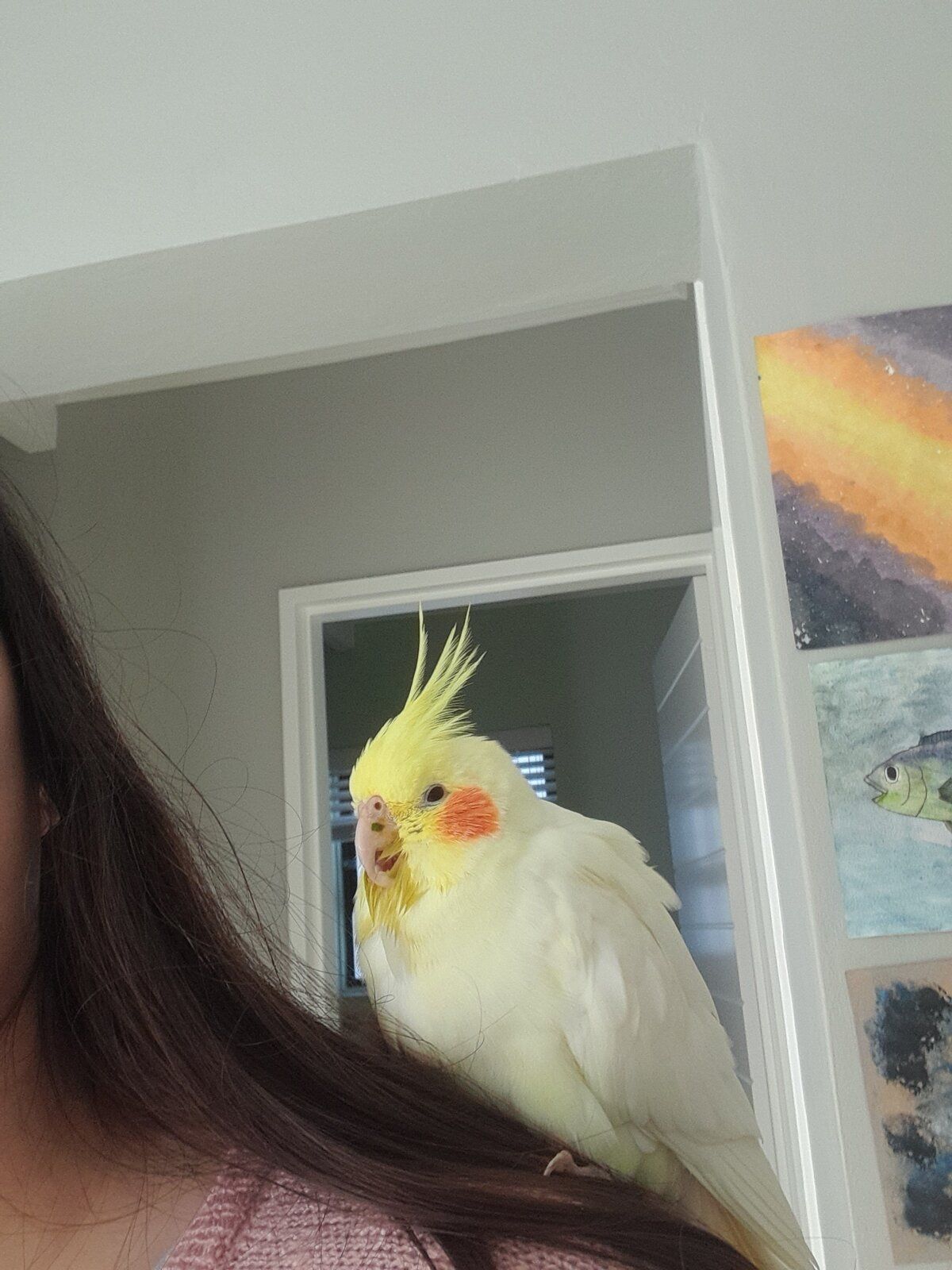 My birds have committed a terrible crime...

Got a cockatoo as a first-time bird owner. Is he (she?) happy?