Hello, I've had my GCC for a little over a month now and I've gotten him from an ex-breeder who was getting out of the hobby. He's not my first parrot however he is my first companion parrot so I'm not too used to having a parrot that willingly loves to spend time with me haha
A little about my dear Benji boy before I go into my question!
He's a little over a year, I believe, and not DNA sexed at all so I'm just guessing that he's a boy (I hope he is tbh so I don't ever have to worry about possible egg-binding in the future)
I'm pretty sure he sees me as 'his person' because from day one he already wanted to come out of his cage to hang out with me. (And he was sort of an unsocialized bird as stuff from the breeder's life caused her to not be able to put a lot of time into her birds - I also didn't get to choose him so you can imagine my surprise when I somehow ended up with a bird who is already really tamed! I'm so used to working with birds that I've had to build that sort of bond with so to get it so easily was so strange)

But, I've been researching a lot on hormonal behavior and how to prevent it though I haven't seen anything of the sort for this.
Videos are linked at the bottom because I don't know how to properly upload them and I'm trying to write this out as quickly as possible before it's his bedtime so I haven't had the chance to look anything up yet.
But I'm fairly certain that this is hormonal behavior cause it looks like he's asking me to 'mount' him in one video. (However, it could just be the angle he's standing in because he hasn't put his butt towards me any other time nor is he in your typical 'mount me' pose) He started doing the crying thing recently anytime I use my mouse or play on my phone and if I don't show him any attention he'll attack whatever object I'm messing with.
If it is hormonal behavior how do I discourage it?
Also, I do this thing where I'll place my fingers on his beak and squeeze it a little (as you can kinda see in the video) and he really loves it when I do it to him but I'm scared that he could interpret it as me trying to 'feed' him and if that is the case I'll stop doing it immediately! I don't ever do it in the feeding motion but I can understand if he could still interpret it as such.
I'm just so used to pigeon behavior (another bird type that I keep) and they love to shove their beaks between your fingers but I know with parrots you can't let them think that they're your mate cause of the hormonal issues it can cause! It was just the first thing I did whenever he started crying at me and now he expects it every time.
Thank you so much for any help!

Hi,
I do think is hormonal. The lovey sounds and wing flicks. I'm guessing a girl bird.

I do rub mine beaks from time to time without triggering anything, but everyone is different.

This can also be a behavior baby burds do when begging. But I think hormones.

Attacking stuff you pay attention too, can just be run of the mill parrot jealousy. My GCC would Attack my phone and bite it abdvtell it No! Or bute me when I used it. So I did a lot of positive association. I fed her treats when ever I held phone. Helped us get past it. Now she leans on the phone when she wants me to pet her

You can still rub face scratches pet head. But maybe less beak rubbing. Don't make her feel rejected. Just redirect. Have her step up and get a treat. Move her to perch near you and then bring her back. Do activity together like simple forage for treat you hide, or simple tricks and target training. Or get up and talk a walk around the room with her. Just to distract her and give her something else to think about.
Spring and fall are breeding season.

It's always a good idea to use a digital kitchen scale and track weights weekly. A big jump in weight you know they have eggs. Any drop and you know it can be health issues and caught early and taken to vet equal great outcomes.

This is who I used for DNA test i think. Its easy to do. Print the form follow directions . You trim a nail just barely into the quick, you only need one drop of blood. You touch the nail to the paper. Then I used flour on gauze held to nail till quit bleeding . Depending on your comfort level. 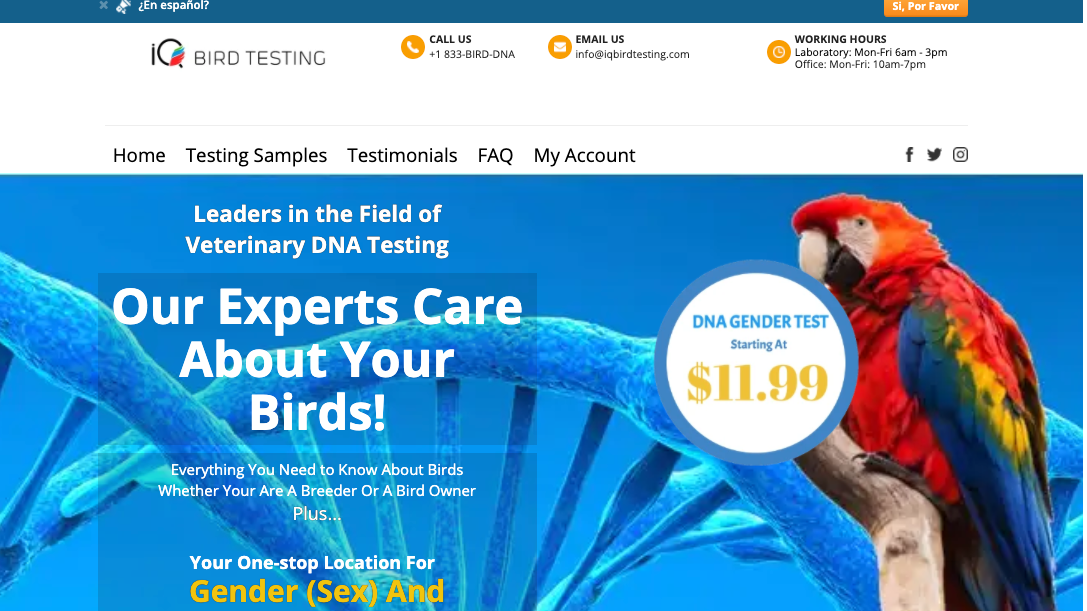 Bird DNA, Gender and Disease testing at an affordable price and rapid turnaround of results.

iqbirdtesting.com
You must log in or register to reply here.

I need help with my senegal, i got him about a month ago, hes been really good, out of no were...

A Rant on Hormones