My Alex, Mozzie, just finished a moult about a month ago. I noticed that her feathers grew back in a bit ragged on her wings and tail, but I thought it was because they were fairly fresh and they'd even out.
But since then, I've seen her preen and haven't noticed any destructive behaviours. She was brought in for a checkup in November of last year, and I was told she was maybe a little hefty so lay off the treats, which were mostly peppers and sunflower seeds (she doesn't eat the seeds, just likes hulling them oddly).

Anyway, she's on a pellet diet and I've been giving her less fruit and veg because of the vet's concern on her weight. Like I said, no noticed feather destruction behaviour, and she has a large cage so her tail doesn't run against the bottom or anything like that. Any ideas about why her feathers aren't sleeking nicely?

Pictures, so everyone can see
OP

Hey, everyone... It has been a week since I posted, so I wanted to check in and see if anyone had any ideas...?

Unfortunately I don't have a diagnosis for you and can only relate my experience.

Nike likes to hang around and sleep in one of her two round rope swings and tends to abrade her feathers on it all the time when she's turning around or preening.

Here's an example of a typical preening session and she will pull her tail over and through the loop multiple times while doing this...and whenever she decides to turn around on the perch. I'm been thinking of removing it but it is her favorite place to stand.

Hopefully someone will come up with a more scientific answer for us. 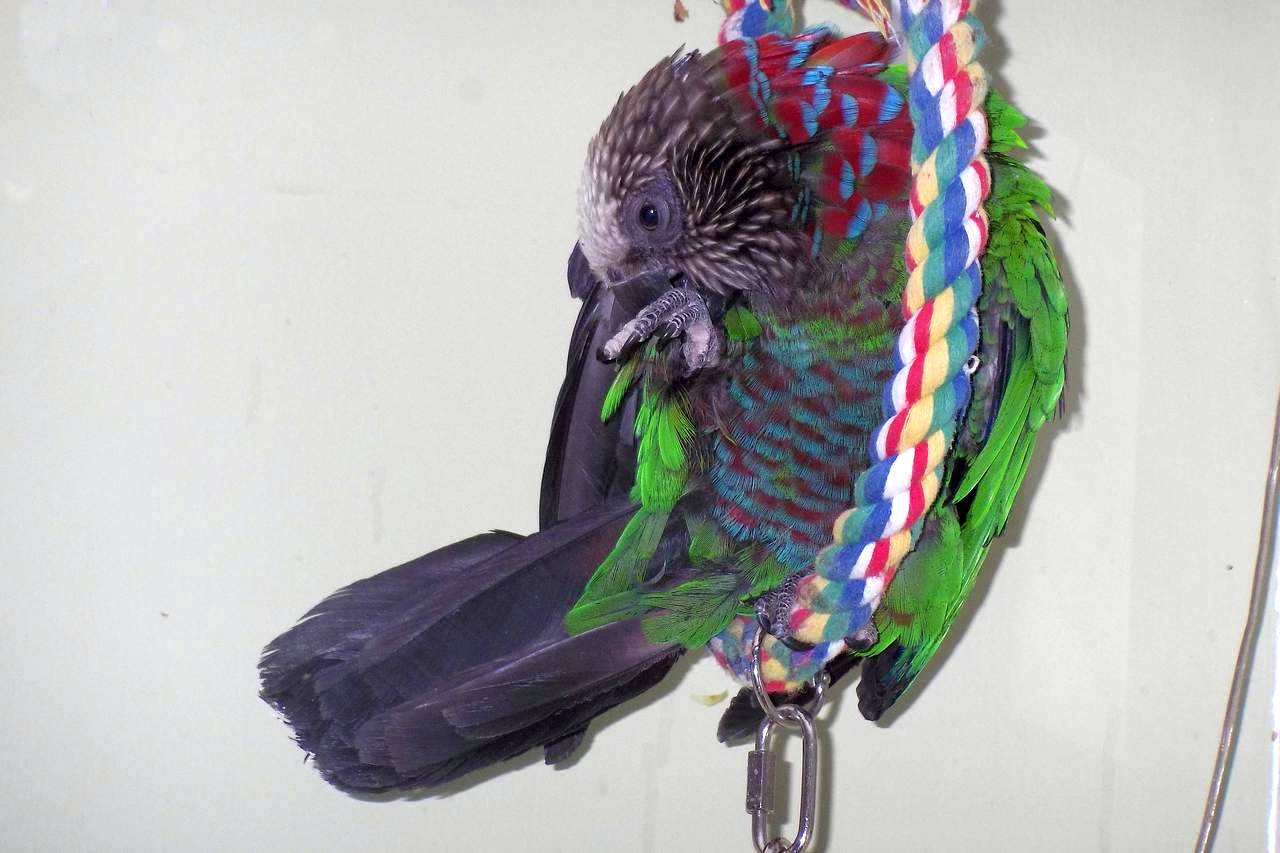 Sorry that your Thread had been missed.

As my good friend above noted, likely a Parrot that is aggressive preening feathers, but!

The process of preening, especially on longer feathers is to reset the zippering segments together so that they provide a consistent surface to support flight. This appearance is more often seen with much older feathers, which are ready for replacement. Or, an over active Parrot in an undersized cage, especially on tail feathers.

I have never heard of an Avian Professional suggest cutting veggies out of a diet to reduce weight as that is counter intuitive for both Parrots and Humans... Reducing the volume of pellets and fruit, I can understand. I recommend that you call your Vet and clarify that point.

Could be that she's just rough on this round of feathers! Usually they're much sleeker, but we moved just before she moulted so she's really just settling in and getting better from her discomfort from her moult.

Also, thanks for the tip! I'll call my vet (if she's still open, what with all this happening ) and get her input!

When you call into your Vet, remember to leave a mobile phone number and your email address.

FYI: Most Clinics are listing their email address in addition to the Clinics's business phone number. In todays World, it maybe better to email with photos' attached.

As Sailboat says, veggies should be a vital part of your bird's diet. She can do without the extra sugar in fruits, but veggies offer trace elements and various vitamins she needs. That might be the answer to her problem.

One of our members, Umar, who keeps *the* biggest, healthiest-looking Alexes I've seen, swears by adding a multi-vitamin to his birds' water. He reckons it improves their feather and general health. Why not check again with your vet, or maybe you could ask a respected breeder what they do for poor feather?

Do let us know how you get on. It's very distressing to worry about our birds' health and not be certain of a remedy! Good luck!
You must log in or register to reply here.

Rose-ringed Parakeet is losing feathers next to his right eye.