I'm sorry I haven't logged on for awhile. I recently had my only form of income cancelled on me and have been fighting this ever since. I will respond to my other thread responses soon. I did read them when the replies came through weeks ago. But I wanted to briefly come on here and talk about Luna the lovebird, who passed away this morning. She was a really nice lovebird. Most lovebirds are known for their feet biting habits and bullying, but Luna never hurt a soul. The worst she ever did was growl at one other lovebird. She's had stuff accidentally done to her in the past but she pushed through. She came from a pet shop in 2017. We even saw her breeder being her and her friends to that pet shop in early 2017. We noticed every time we visited that shop, she was always on the floor of the cage. Being bullied. In mid 2017 we got her. And she thrived here. She's always had a kind of breathing problem though. Since bringing her here. I've never known what it was though. But despite that she thrived.

She has seemed a bit off the last few weeks on and off. I thought she maybe accidentally ate her own poop or something. But she was flying around here and there too. And eating. Last night she seemed more off though. Like not well. We gave her cuttlebone and she devoured it. She's always loved cuttlebone. It's actually been very hard to find fresh cuttlebone locally. I had to buy prepacked ones the last few weeks and they haven't been the same.

This morning she was found at the bottom of her cage dead. I also saw blood in one or two food bowls and on a perch. It was a shock. My partner opened up the blankets only to find her dead. I couldn't believe it. It seems that the blood came from her bottom. I would like to know if egg binding causes this? Because my partner thinks it was egg binding at the location of the blood and where it came from. I am not 100% sure if she has laid eggs in the past, but I think she has. She has a cage mate named Astro, and Astro has laid more eggs than her. But awhile ago we put a nestbox for them, as we weren't certain of their genders, and they laid more eggs than one lovebird could on their own. This would have been in 2019 or 2020.

Astro is now devastated too. She has been sitting all day and hasn't eaten. We've been looking for peach faced lovebirds for sale in our state but no one is selling them at all. I wouldn't go and put a new bird with her straight away but to be able to have one in a seperate cage for awhile, so that when Astro is ready, she knows that she can find a new friend. We have four other peach faced lovebirds but they are paired up together. Putting Astro with one of those pairs isn't an option. We tried this with Luna in 2018, when Kiara the lovebird passed away, and the other birds just bullied Luna. We were so lucky to get Astro and even luckier than she bonded quickly to Luna. Astro even defended Luna from the other peach faces when we let them out of their cage and one tried to annoy Luna.

I am not 100% sure of what Luna's approximate age would have been but I don't think she was more than 5 or 6 years old. Astro is only about 4 years old. I feel for her. She must feel so sad now. I hope she is going to be ok. She's surrounded by other lovebirds in other cages. Some are in pairs and some live alone too as they actually prefer their own space.

I still can't believe this has happened today. She was taken to the vet this morning to be cremated. I don't know when she'll be back. Next week I assume.

2022 is a really bad year here. My ducklings got murdered by a monster dog outside, and then squeaky the diamond dove passed away, then socrates the indian ringneck parakeet got sick but recovered with medicine. One diamond dove that I named little friend has spent most of her days on the floor of her cage for the last few weeks so I'm worried about her even though she eats and talks but is a bit bald as her old boyfriend used to peck at her a lot. I worry about a few other birds who have had permanent issues like feather plucking. And now Luna is gone. I feel like a curse was put on us or something. It's getting hard to function and do even the basics now. I already struggled with that for the last 2.5 years and it's just getting worse with all this happening.

I only hope that Luna was happy here and that she is still happy with Kiara over the rainbow bridge. She liked Kiara as she was her neighbour. But Astro became her best friend when Kiara passed away. And now Astro is sad.

When a bird dies from egg binding do they bleed from their bottoms? This only seemed to happen overnight. My partner is the one who said it was egg binding. I can only remember that around the time Socrates was unwell and treated with medication, Luna looked a bit more tired than usual. But she was eating well. And would fly out of her cage if she saw the opportunity. I didn't know if I was just paranoid because Socrates was unwell. I guess I wasn't. Last night she didn't seem well. Normally she goes to eat her food once its filled up but she didn't. Only when she got cuttlebone she ate that instead.

I've attached a photo of the two. Luna is the green one. Astro is the yellow one. Tooney was a nickname for Luna. Kind of a twist on Looney Tunes. 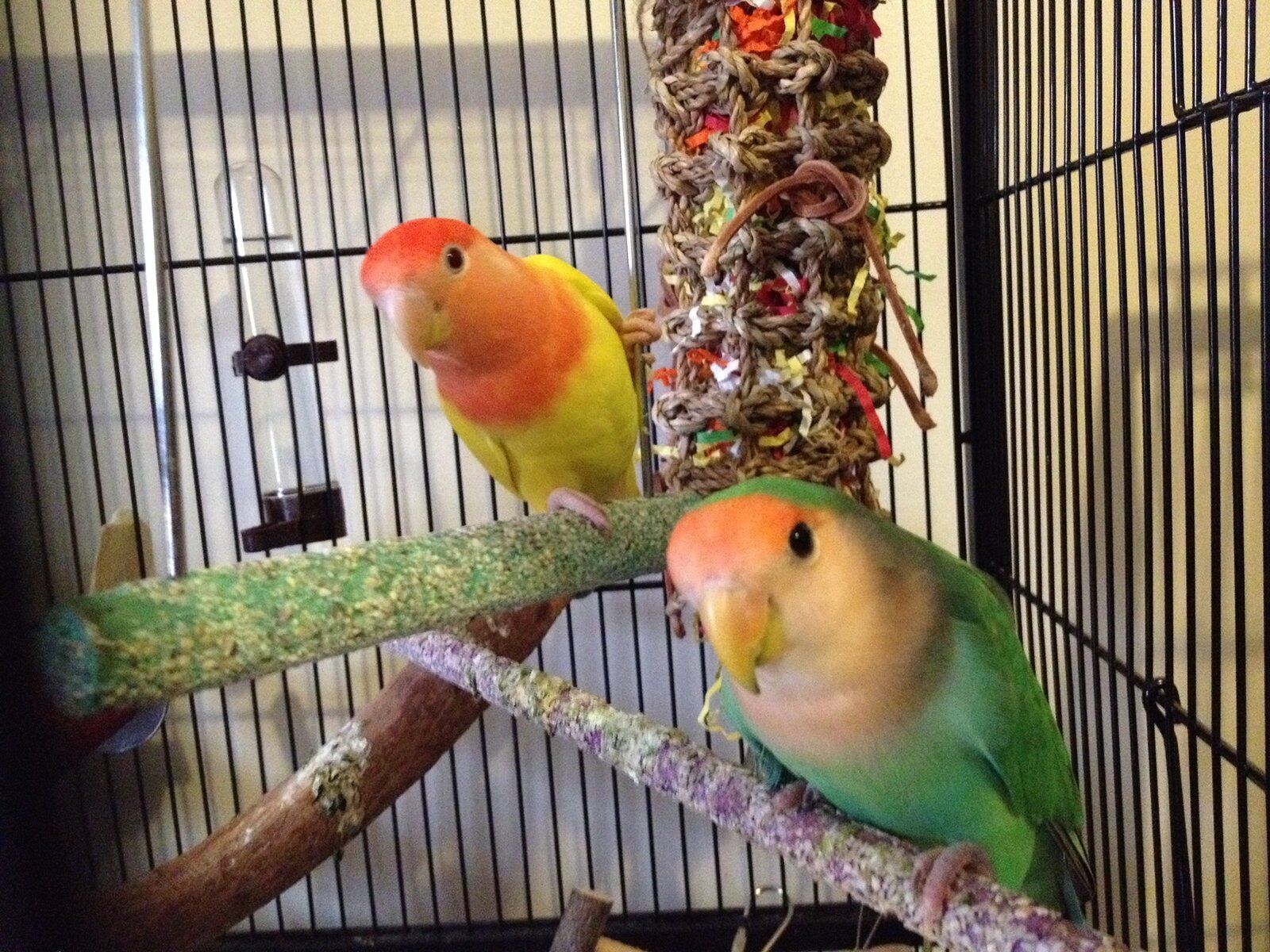 Oh no!! I'm so very sorry to hear of the loss of Luna, so quickly after the terrible loss of those poor little ducklings as well!

What a pretty little birdie, and a sweet soul too. My deepest condolences go out to you, @freshprincess87. The memories and the love you have for her will forever be yours, you will always carry her safe in your heart.

Godspeed to the Rainbow Bridge, lovely Luna, until we all meet again

I am so sorry!

Thank you everyone for the replies and the emoji reaction things too. It really means a lot.

Little friend the diamond dove passed away on Friday as well. I'll miss her sounds. She had a unique sound that was different to the other diamond doves. And even though she wasn't well, she still wanted to talk especially at sunset and still managed to eat until her final day.

I have attached a photo of little friend as well. She's the one by herself in a bowl. That photo is probably from last year. Her eyes were very bright in that photo because she was very alert and not happy with my phone camera in her face. Normally females have darker eyes. I named her little friend because when I would return a refilled food bowl back to them she would come down and eat from it even when my hand was still there. I've also attached a photo of two other diamond doves who passed away this year as well, Squeaky (on the right), and his girlfriend (on the left). His girlfriend passed first earlier this year, and Squeaky passed a few weeks ago. I miss them a lot. Squeaky had a unique voice (which is why I named him squeaky), different from other male diamond doves. And his girlfriend also managed to master his sounds too. They were unique. We've had diamond doves since 2019, when my partner took them from his father. They first stayed in the garage with the pigeons because he thought they would be happier there as they lived in an outdoor aviary at his father's house. But five of them died in the garage over the course of months, and I believe mice killed them. They were brought to live into the house in 2020 and thrived here. But still, some have died and I don't know why. It's heartbreaking. I assumed some developed illnesses from being in the garage but I'm not sure. Or some might have been older than initially thought. I also think most who passed away were females. Squeaky was the only male to pass in the house to my knowledge. And I think he just eventually was depressed as he lost two girlfriends (he liked another girl last year named crackle, but she also passed away) and also had a crooked beak that had to be trimmed regularly so he could eat. He was very special. All of them are/were.

There is now only one original diamond dove left. There are 9 in total. But only one has been here since the beginning as the rest have passed. The others came either last year or this year. I feel bad for the original one. His name is Mr Fluffy. And at the moment he is cooing from a nest bowl. He's trying to let a potential female know that he will be a good boyfriend and sit on the eggs for them if they lay eggs. While I am heartbroken, he is ok. And I'm still monitoring Astro, who was Luna's best friend. Today we gave all the birds vegetables to eat so she did eat some of that. I've noticed she is mostly eating millet at the moment from her seed mix. Normally she eats varieties. And she's only eating from her food bowl that is located next to the other peach faces. So I think she does feel sad that Luna is not with her. 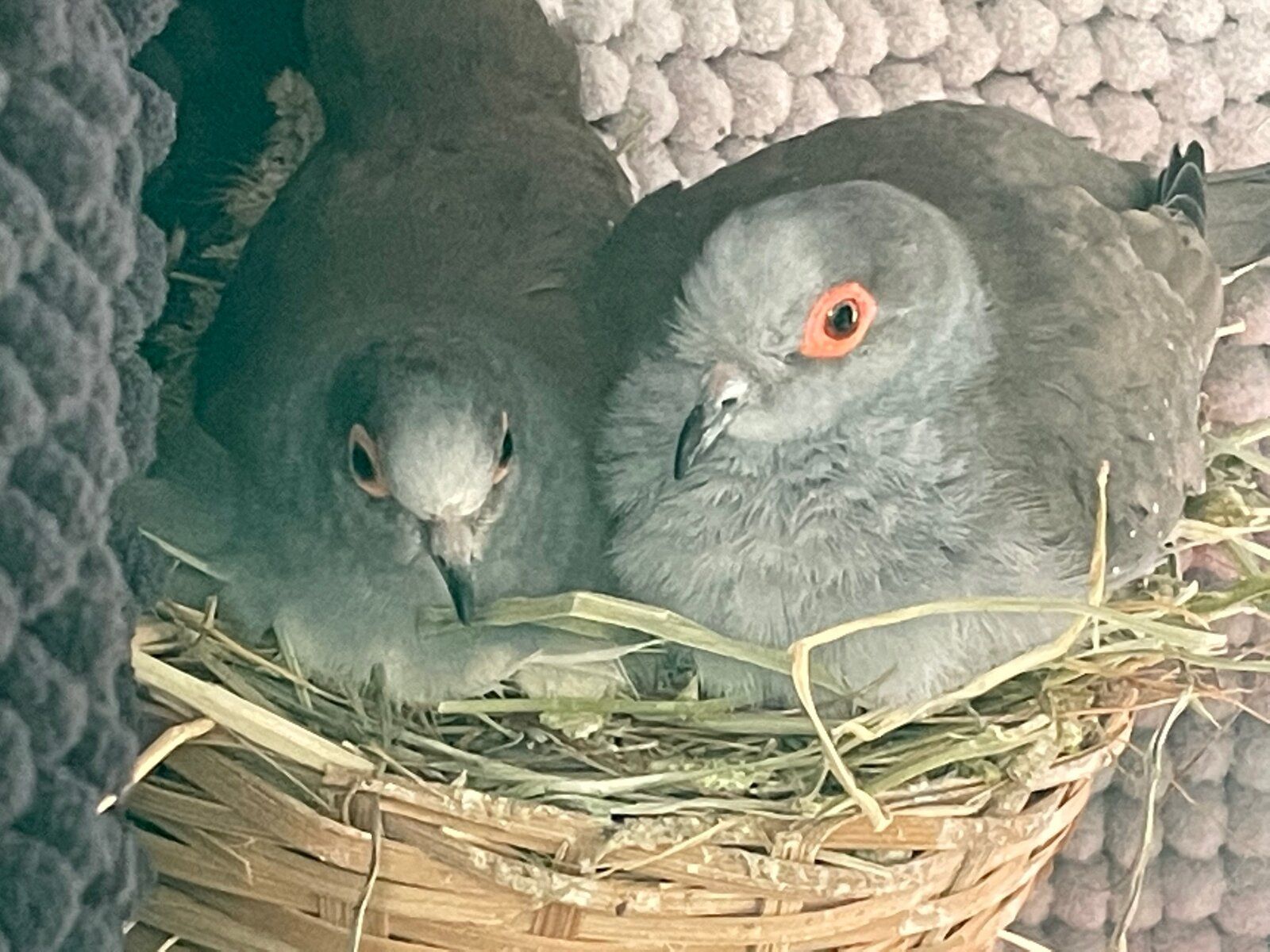 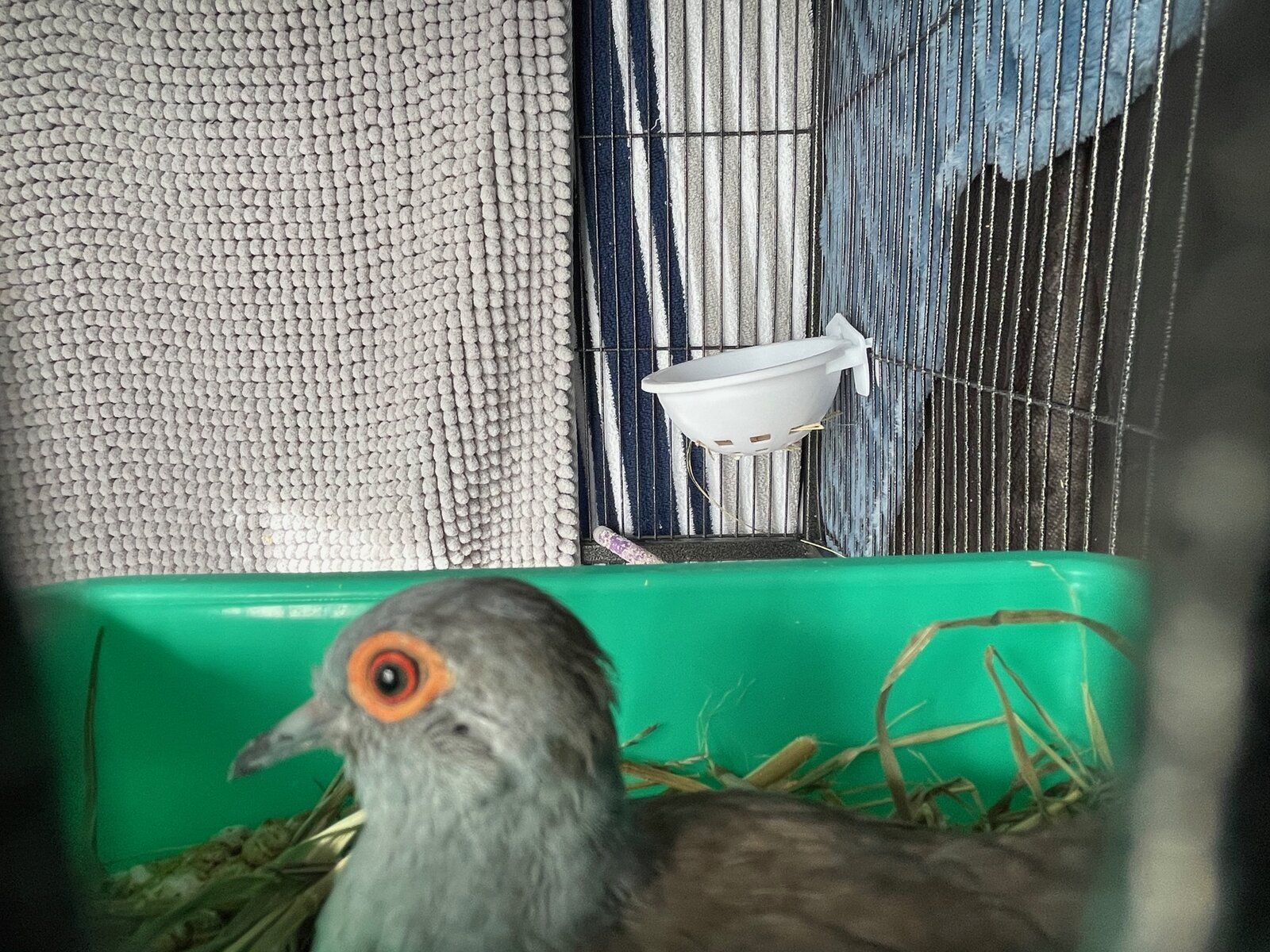 Trying to cope with the unthinkable.

Lovebird laid an egg, what do I do

return after 3 weeks away

Scooter the CAG has passed away

What are the options with a female Eclectus that is unhappy unless she's free to mate?