I had noticed Clark spent an inordinately amount of time under the side table. Near my bed...the bedstand I guess. Today she wouldn't come out as soon as I got home so I took a look and um yeah three eggs (I don't have a male) so they are infertile. I called my vet. She wasn't available but will call me tomorrow. Apparently from searches, you leave them there for about three weeks then take one away every other day.

I never rubbed her butt, but apparently, some bird was, or she just decided.... anyways I'm tracking her poops and everything about her now.

In hindsight she was eating and drinking a lot more choosing less healthy foods with higher fat. And more messy poops. I'll let you know what the vet recommends tomorrow.

Congratulations, you're a grandfather!!

My little lorikeet hen has surprised me with a few clutches of eggs (none lately however thank GOD!!) but it does pay to have a few dummy eggs on standby just in case this kind of thing happens again. You can get some very convincing faux eggs from the supplier listed below...

In the meantime, I recommend you boil whatever eggs Clark lays for now, even though they are infertile. If she is anything like my Lilly she might be a very determined sitter and could end up breaking the shell after a few days, which means you will have a nasty mess to clean off of her. Boiling the eggs means that if she does happen to break the shell everything inside is solid so much easier to dispose of. Mark each one with a little dot from a sharpie pen or similar so you know which is boiled and which is new, oh, and don't forget to let them cool down before Clark sits on them again

I don't know about removing them one at a time to be honest, I've never done that, unless of course Lilly managed to break one. I generally replace hers with faux, and then just let her sit on them for a bit beyond the time that a hen would usually sit, the theory being that she will realise for herself they are not going to hatch and will lose interest eventually. I took Lilly's eggs away about a week after they were supposed to have hatched, she was a bit discombobulated for half a day or so, but otherwise she got back to normal pretty quickly.

Will be interesting. Usually they lay one a day, nit 3 at once. Could be yiu missed the first? I'm no egg expert though!!

My GCC RIP " Burt The Burd" ( yeah thought was a boy fir 10 years....lol was so excited when Ta-dah joined us she laid one a day for 4 days . I removed each , or they fell through the cage, as she laid them. She stopped was fine and never during her next 7 years laid anymore.

Phoebe laid one, I could feel the next one , but I heard a clink the next night, and never found it......I remove. She did fine. This fall she gained 8 grams and was acting broody. So I moved her cage abd changed everything inside it. And decreased her seed. Must have knocked her out of it, she absorbed tge eggs, lost the extra weight and didn't lay.

I hope everything goes smoothly!! And she stays healthy and safe
OP

I'm sure I missed them so probably laid one a day or every other day so far, leaving there till vet advises so she may stop laying.
OP

no I saw it on youtube and other sites you slowly take em away.. I'm just going to do what my avn reccomends.

Hej Clark, whatever works for you! Lilly often only has one left by the time she's done sitting on 'em for a few weeks because she's usually broken the rest by that stage anyway

Surprise, surprise! Take a read on Jim's thread on the fact that he had Amy for 34 years and only found out 2 years ago that Amy has a decidedly MALE slant on things.

WOWWWWWWWWWWWWWWWWWWWWW!
Gotta love it.
Planet Parronthood.
Ya never know.
If the Rickebird ever lays an egg, I will stroke out!
Famous last words?

GaleriaGila said:
WOWWWWWWWWWWWWWWWWWWWWW!
Gotta love it.
Planet Parronthood.
Ya never know.
If the Rickebird ever lays an egg, I will stroke out!
Famous last words?

I think RB will now lay an egg just out of spite!!

If Rickebird laid an egg. There would be a Worldwide Shock as there is likely not a Hen Club in this World that he had not laid waste too!!

If RB laid an egg, Gail, i'd fly over there and shake his hand and get you a big kiss on the lips from Carmen Mirranda.
OP

My AVN called me back.

She said leave them there for about three weeks so the bird will finish her clutch of however many it wants and get her out of that "Mode". Then take one away every other day after that. So that's the plan.

Also I knew Clark was female because I DNA sexed her years ago.
OP

The hardest part of this is she is being such a devoted mother to the eggs and giving up bonding time, but I know they are infertile. She comes down, eats like a horse then chirps to go back up.

I'm letting her sleep there, in the mornings she pops out eats in her cage, then I go off to work and she heads back down there.

I kind of miss my bird and I know it's all for naught.

Yep, that's pretty much how Lilly was while she was sitting, she was VERY devoted. Her last clutch was during a very hot early summer and I ended up ferrying food and water to her, she was so insistent on hatching those eggs, she really only left them in order to go poop! But happily she regained her usual demeanour within only a few hours once the eggs were removed, even though she'd been sitting on them for about a month, and I'm sure Clark will do the same for you
OP

Oh there was still 3 today, but I expect a fourth tomorrow. As she is still eating huge and drinking huge.

From one sort-of-non-birdie-grandparent to another, you're welcome

Still just three eggs I guess she wanted a clutch of three. But Clark used to sit on me basically every minute I'm home now she rushes up speed eats a ton of food and then is like ok I'll give you a kiss then gone back under the bedstand. I miss my conure!
OP 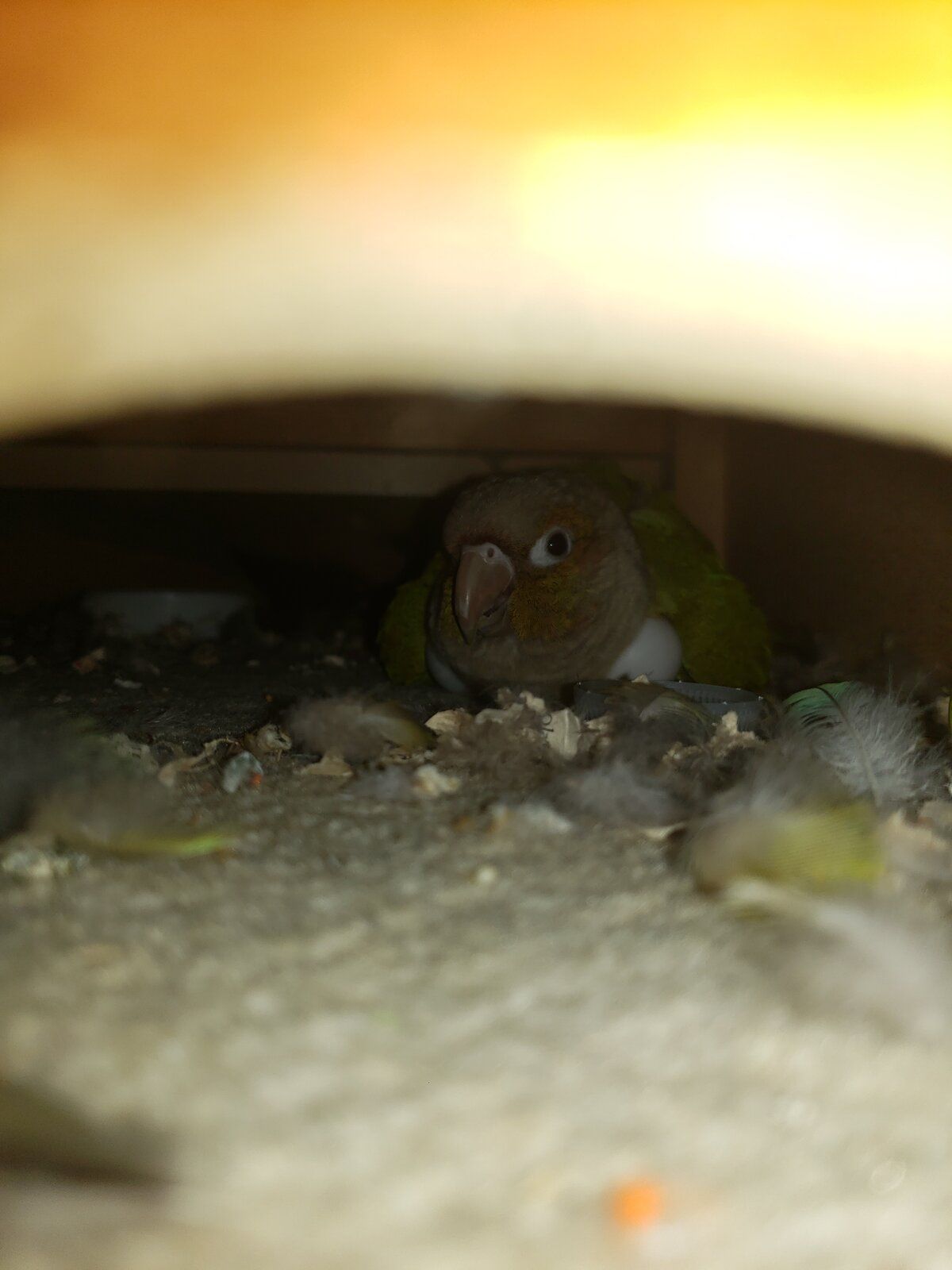 W
Lovebird laid 2 eggs! When can I take them out?

U
Umi laid an egg!