I've worked with LOTS of older rehome zons over the years. Regular bathing, vet care and grooming, and most of all, GETTING HANDLED AND INTERACTED WITH instead of being left to rot in a cage, will do wonders for bringing out this bird's personality.
Click to expand...

Could not agree more. Gaining their trust followed by frequent handling and interaction is key. My Amazon was also cage bound for 25+ years and was characterized as mean when I got him 9 months ago. Now he asks to step up, wants head scritches, and recently started acting silly to get a laugh from us. He is a lot of fun. As with most Amazons, he is very excitable and that can quickly morph into aggression, so be sure to follow their lead and be attuned to their body language!
OP

Yeah, Jasper was cage-bound when I got her as well. Wouldn‘t come out of her cage for the first month or so. I just left the top of the cage open for her for when she finally decided to come out, and I read to her and gave her treats and whatnot to help her get used to us… and put new toys and perches in for her.


Someone got sprayed by Mommy tonight. 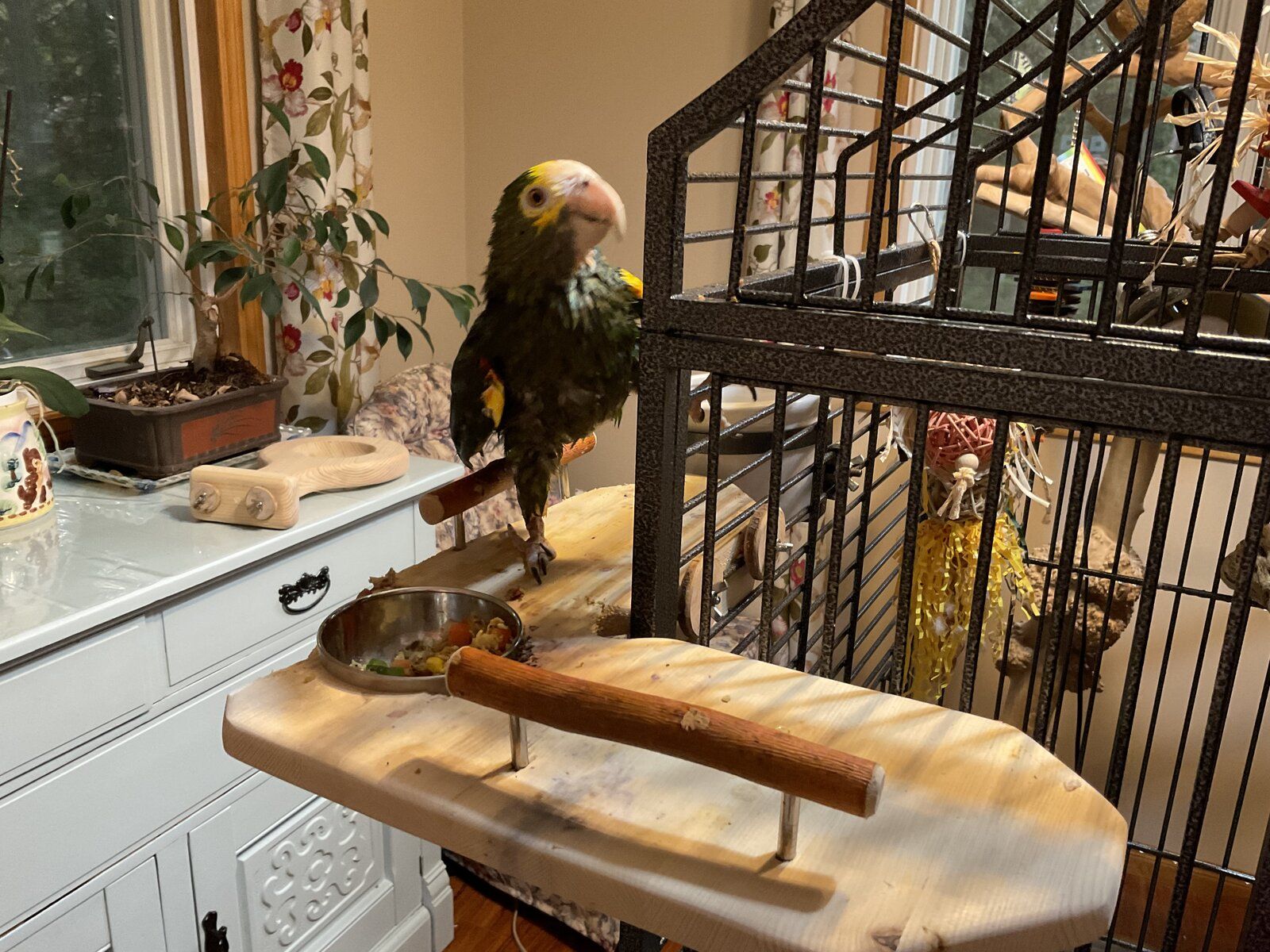 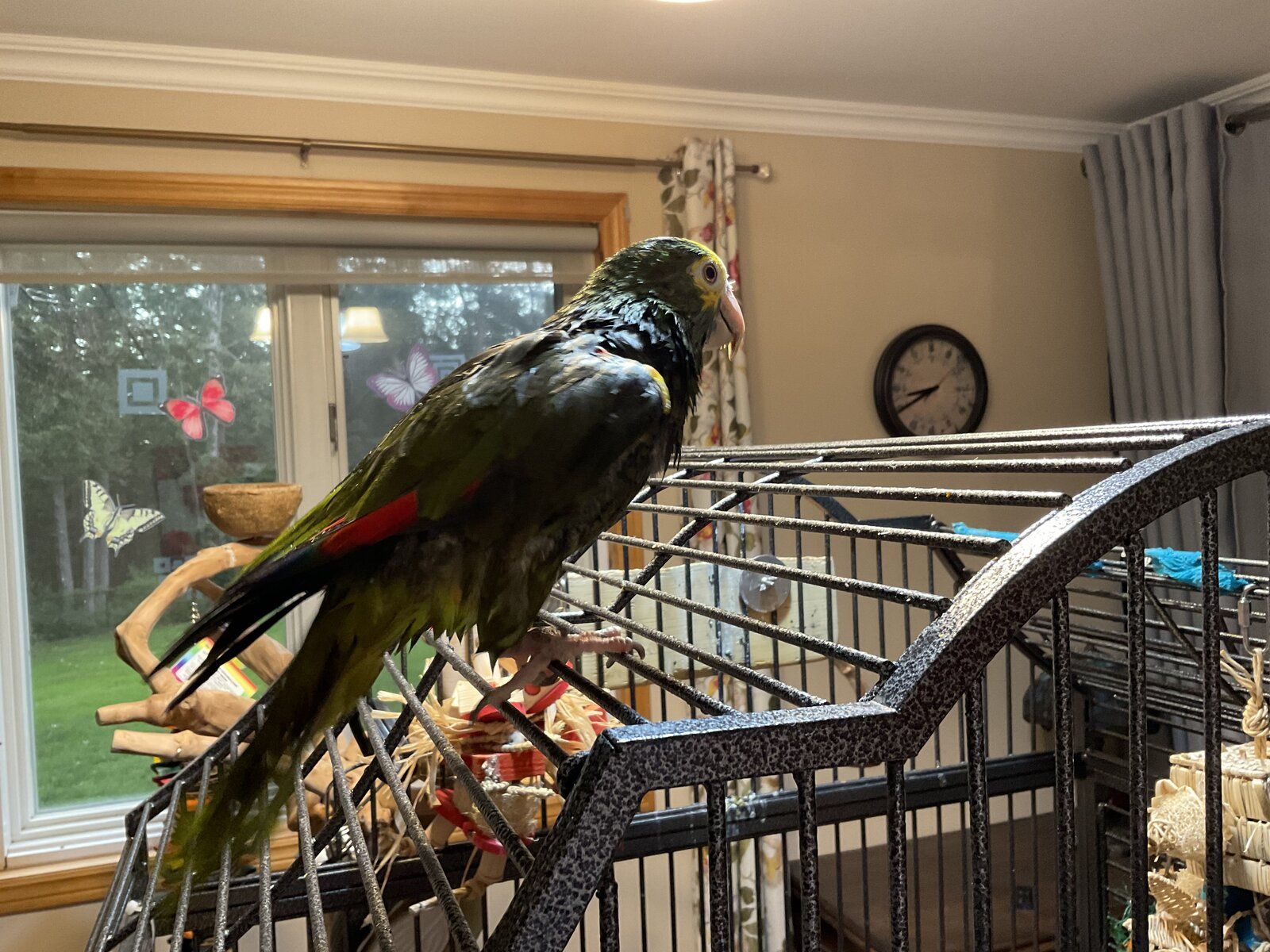 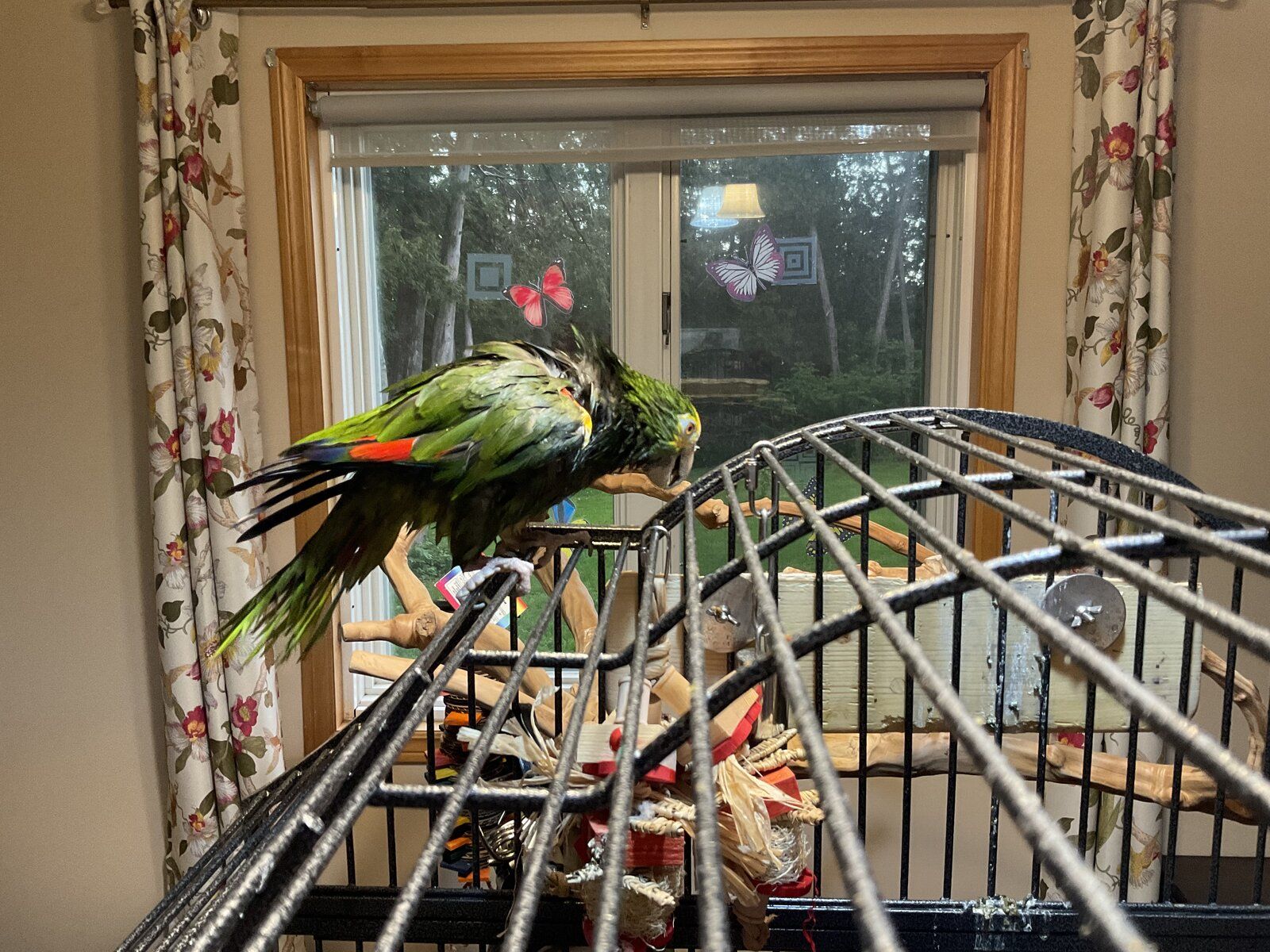 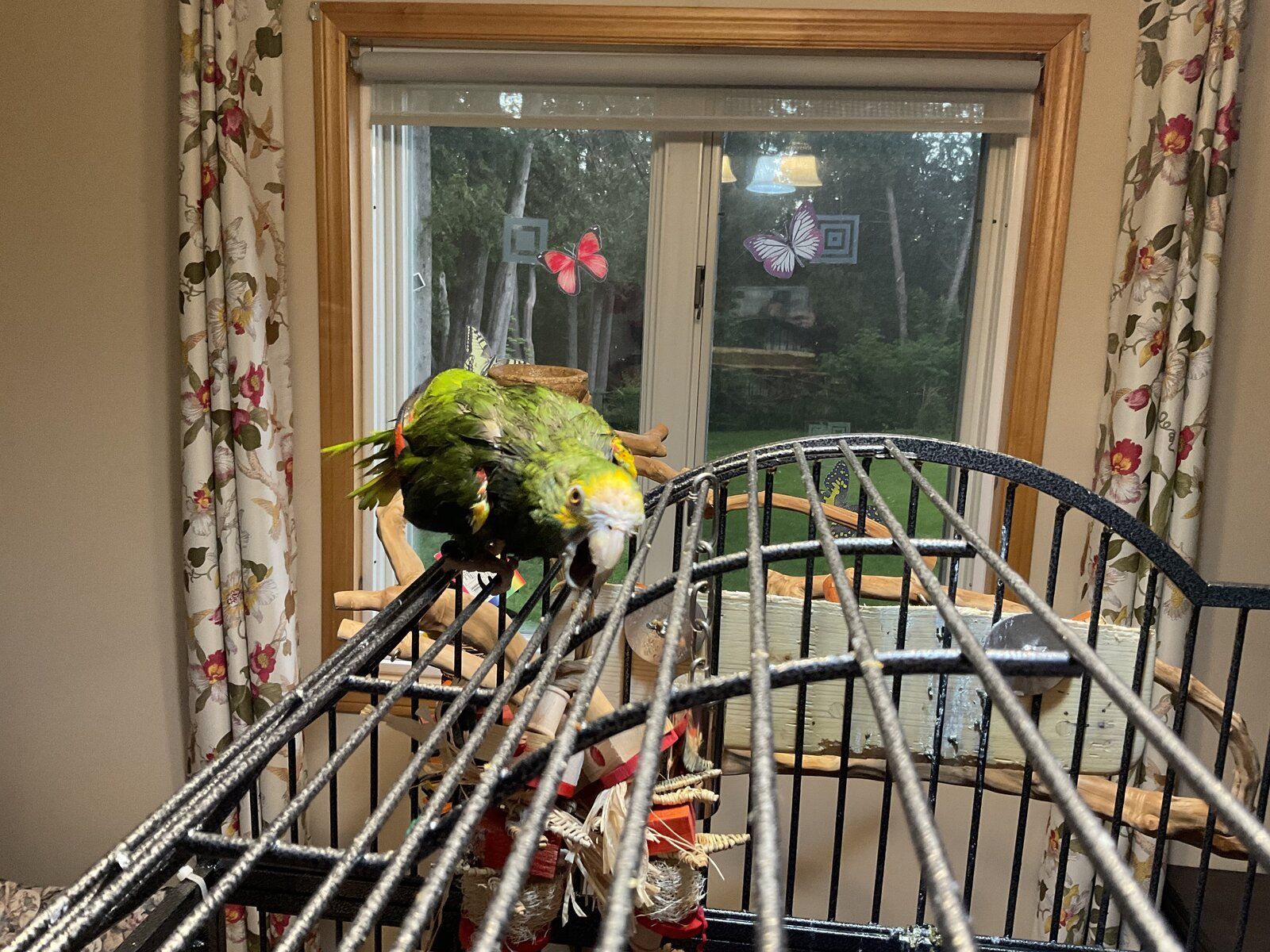 Just ordered her some new stuff from a baby store. Got her a macrame dangly thingy made from organic cotton rope, a cute blankie with a pastry pattern on it that she might like to snuggle, and a set of wooden sensory tumbling toys (one has a clear cover with tiny tumbling balls in it, another has a mirror, and another has wool or something in it that she won’t play with without supervision). I’m obviously gonna supervise her with them to make sure she‘s gentle with them. She’s not as destructive as the average parrot, so I’m hoping they’ll be suitable for her. If not, I can just use them with my future sugar gliders.
Last edited: Jun 3, 2022

Err just my opinion but the fact that the cotton rope is orgaic does not make it safe.
If ingested it will still cause a blockage.
OP

Yeah, I know she could, in theory, ingest it. She only has it while we’re sitting with her.

Anyways, I finally found Mazuri for the kiddos, and she started eating it today. I bought her the one for large birbs. I was worried the pieces would be too big since she tends to be fussy about the size of her pellets, but she actually grabbed the biggest piece in her bowl, put it in her foot, and munched on it. The pellets seem to be crunchy, rather than hard, which she seems to enjoy. After she’s been on them for a couple of months I’ll take her to the expensive avian vet to have her nose flushed (she has rhinoliths from chronic vitamin A deficiency), and to have blood work done again.

Oh yeah, so my cousin has been staying with us during the week for almost a year now, and has been here everyday for over a week now since my parents and the dogs are on a camping trip. Well, Jasper’s decided that my cousin’s almost as amazing as my dad, and is letting her pet her and stuff. Meanwhile when I went to pet her she wouldn’t let me, then when I was baby talking her she swiped half-heartedly at my face -_-

Teddscau said:
To make a long story short, an elderly couple wants to know if I'll take their 29 year old parrot. I met her tonight, and it turns out she's a 29 year old yellow shouldered Amazon, and her name's Jasper.

I've never considered an Amazon before, but she seems sweet and is definitely in need. They definitely seem to care about her, but she's been very neglected. Her feathers look quite dull, her beak's a bit overgrown and is dull and yucky looking, her feet have pressure sores, her posture is quite poor, she only has three toys (they're all really old and don't look very fun), she only has two perches (she has a big dowel perch which is causing bumble foot; and a single cement perch), she seems to be kept in a room away from her humans, and they never take her out of her cage. It's clear she doesn't receive adequate mental stimulation or exercise.

She was very quiet for the first twenty minutes or so, but she started coming out of her shell when I started complimenting her and doing baby talk. She started climbing upside down in her cage and was hanging upside down to show off for me, and she started making cute Amazon sounds at me while I was flirting with her. She also did a little dance for me, and she'd come right over to the side of the cage to mumble at me. She became really excited when I started calling her by her name. I didn't take her out or anything since we were meeting for the first time, but she seemed to like me, and she wasn't territorial.

I don't have any personal experience handling a bird her size (well, I snuggled with an orphaned gull while taking him to a wildlife rehabilitation centre), but I gained a lot of experience handling and training aggressive birds when I adopted little Noah. He was such unbelievably violent the first few months I had him. He's a sweetheart now.

Apparently Jasper isn't loud, and she likes whistling hymns. She used to talk, but she hasn't talked for a long time now, which is sad. I don't think adopting her will change my life very much. I'll still have plenty of time to play with the birds in the aviary. When I'm not sleeping, eating, or in the aviary, I can just take her out of the cage and have her sit on me or put her on a play stand (I'll have to buy a couple). She doesn't have a history of aggression, so she should be fairly easy to handle after getting her used to being handled again. The trick will be to get Dad's chihuahua not to try to nibble on her (the dog's a freaking idiot). I'll need to train her to eat chop, sprouts, mash, and birdie bread, but she's already on pellets, which is great. I'll have to spend a lot of money getting her toys, perches, and appropriately sized pellets (I just have tiny pellets). I'd probably harness train her as well after she's all settled in. I'll probably buy a new Caitec carrier for her as well for when I need to take her to the vet, or when I want to take her on a walk or something.

So, what do you guys think? I'm seriously considering adopting her, but it's quite a big decision. My parents are a bit hesitant, but they definitely seem to pity her and aren't saying no. I'll probably visit her at least a couple more times before adopting her, and I'll see if she'll come out of the cage for me.

It's kind of funny now that I think about it, because Jasper's a few years older than me.
Click to expand...

We got Paco at when he was 38. One family, owners passed of old age 5 years apart. I knew the realtor selling the house and the adult children were ready to consign him at a bird shop.
My Experience was with conures and cockatiels, but I couldn't leave that depressed bird to an unknown fate.

So I took him home. Cheered right up after 3 days and found out Paco was a she when she got egg bound a month or so later. Got through that with surgery and so many cuddles

She still won't play with toys and hates bells. She's very stubborn but has stopped attacking my husband and son. I have scars and nerve damage to fingers and face but I will NEVER give her up.
She used to be grateful but now she's 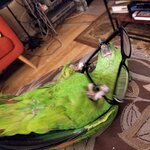 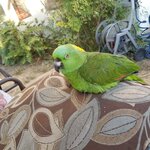 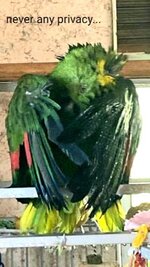 imperious and I love her being so confident she's safe and happy. Sometimes I have to send her to birdy fat camp when we get a little too loose with the snacks, but all in all, a senior bird is a gift from God. I swear. 6 years later and it just gets better/worse depending on who in the family you ask, lol!

Ensure that you read the huge Sticky Thread near the top of the Amazon Forum; I Love Amazons... Target Fledging an Adult Amazon! Whether she learns to fly or not, does not matter. She needs to use those huge flight muscles to activate her Heart and Air Sacks (Flapping-In-Place). It will help greatly in adding months to her life and keep her weight under control!!

I assure you that it will continue to get better or worst every year! Older Amazons have Hearts that just keep loving ever more!!
You must log in or register to reply here.

Some Questions About My BF Amazon :)

I have soooo many questions!!

Struggling with guilt about owning my Mealy Amazon

Meeting an adult bird for the first time - how do you know if you're "chosen"?