Introduction to me:
My name is Vincent I've always been an animal lover and have tried to do something with animals as long as I can remember. When I was finally old enough at 12 I got a workers permit to be allowed to volunteer at the Virginia Living Museum and I volunteered for every job I could. At 16 I was old enough to start working the touch tanks and when I was 18 I was able to work in the back with diet prep and cleaning. Unfortunately, it had to come to an end between needing a job and moving. I did get to have a job as a dog groomer for several years before moving and my back became an issue.

I now work from home as an artist and product designer. It's tough to make money sometimes but the best part is I have all the time in the world to spend with my flock! I'm working on training my birds as well as learning as much as I can for their care. I attend currently up to two different bird clubs in my area and I'll be checking out a third one as well. I volunteer at the clubs expo tables to help raise awareness for our clubs while providing information to the public, such as but not limited to tips and tricks to local rescues to help with rehoming efforts.

I hope to learn all I can I currently have a wonderful friend and bird breeder teaching me to hand feed baby birds. I also volunteer as transport for a wildlife refuge and plan to take rehabbing classes to specialize in avian. If anyone knows of companion bird training certifications or resources, please share with me if you can!!

Introduction to the Flock:
Hawk the Green Cheek Conure:
Hawk was my first bird in a long while, after my back surgery scared me a bit I didn't want to put off any dreams any longer. I researched for a long awhile before deciding a gcc might be the perfect bird for me. I did buy her from a local store that was recommended to me. They are not like the big chain stores and seem to put alot more effort and care into their animals then other places. After I put my deposit in I drove in every day to see her till she weaned. We have a strong bond she is my baby and I have problems sharing her XD As such she is not really good at going to anyone outside the family. We are currently working on recall and harness training as I am trying to free flight her. I'll update as I have more, she is about 2 years old now and I need to have her officially sexed as I just call her her just cause.

Bently the Sun Conure:
Please see Bently's story as its a bit longer I gave him his own thread:

Bently was once known as Coco. I am Coco's ((Bently's)) fourth and final home. He came to me about 4 months ago. According to Bently's second owner his first owner adopted him out due to no longer having time for him, so he was always locked in his cage. At some point while he was with his...

Kricket the LoveBird:
I didn't really plan to get this little one this one chose me. I simply went to the store to pick up supplies and made the mistake of taking a look at some parakeets as a parakeet was my first ever bird when I was a kid and I was thinking I might like to have one again. When I put my hand in this little love bird came running, she jumped on my hand cuddled in and after a moment and some head scritches she fell asleep. My heart melted and that was all it took. I also visited this one almost every day till she weaned. She is named Kricket as I went to buy crickets for my geckos so like....I didn't come home with anything I wasn't planning on right?

Tulio the white faced cockatiel:
This one I kind of planned my husband grew up with cockatiels and seems to have happy reactions whenever we saw them so I knew I wanted to add two to the flock at some point. I rode with my friends to a birdmart in NC and I had mostly brought move for toys ((there weren't many toy vendors T_T)). While I was walking around I spotted a beautiful white faced cockatiel and something just called me to him. I asked a few questions showed some interest but in the end after talking to my hubby we decided against getting the cockatiel at least we did for the moment XD. Later as the mart was about to close I had been waiting for the charity raffle to finish as we had to be present to win etc. I went to the restroom...this is part of the story ok! So when I just came out the lady who owned the cockateil was just coming out of the bathroom as well. She offered me a major discount if I wanted the bird still as she rather sell then take him home. I couldn't help but agree and she said well this is the first time Ive ever sold a bird in the bathroom and I was like well this is the first time Ive bought a bird in the bathroom! So....my cockatiel is a toilet chicken XD hence I had to name him something with a T. I love him very much and my hubby loves him too. He is helping Bently with his bird anxiety and Bently helps Tulio with his people anxiety. We are getting closer to being able to handle him every day. And he learned the wolf whistle somewhere and knows where to use it.....so like you ever meet him it wasn't me that thought him that XD.

Will add pics soon as I gather them!
OP

Kricket the love bird hanging out

Bently and Tulio hanging out on one of the mini stands

What a nice flock !
OP 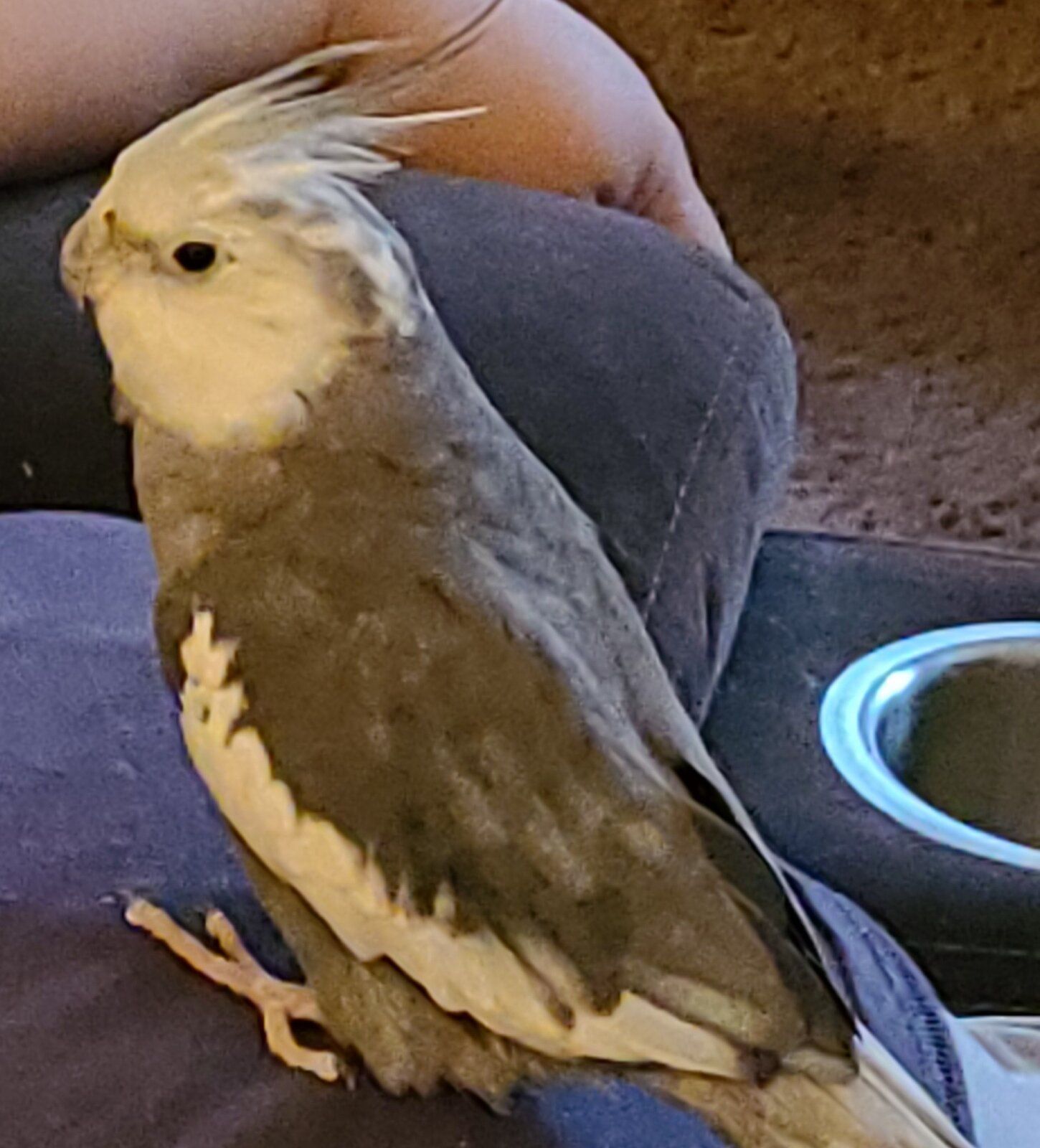 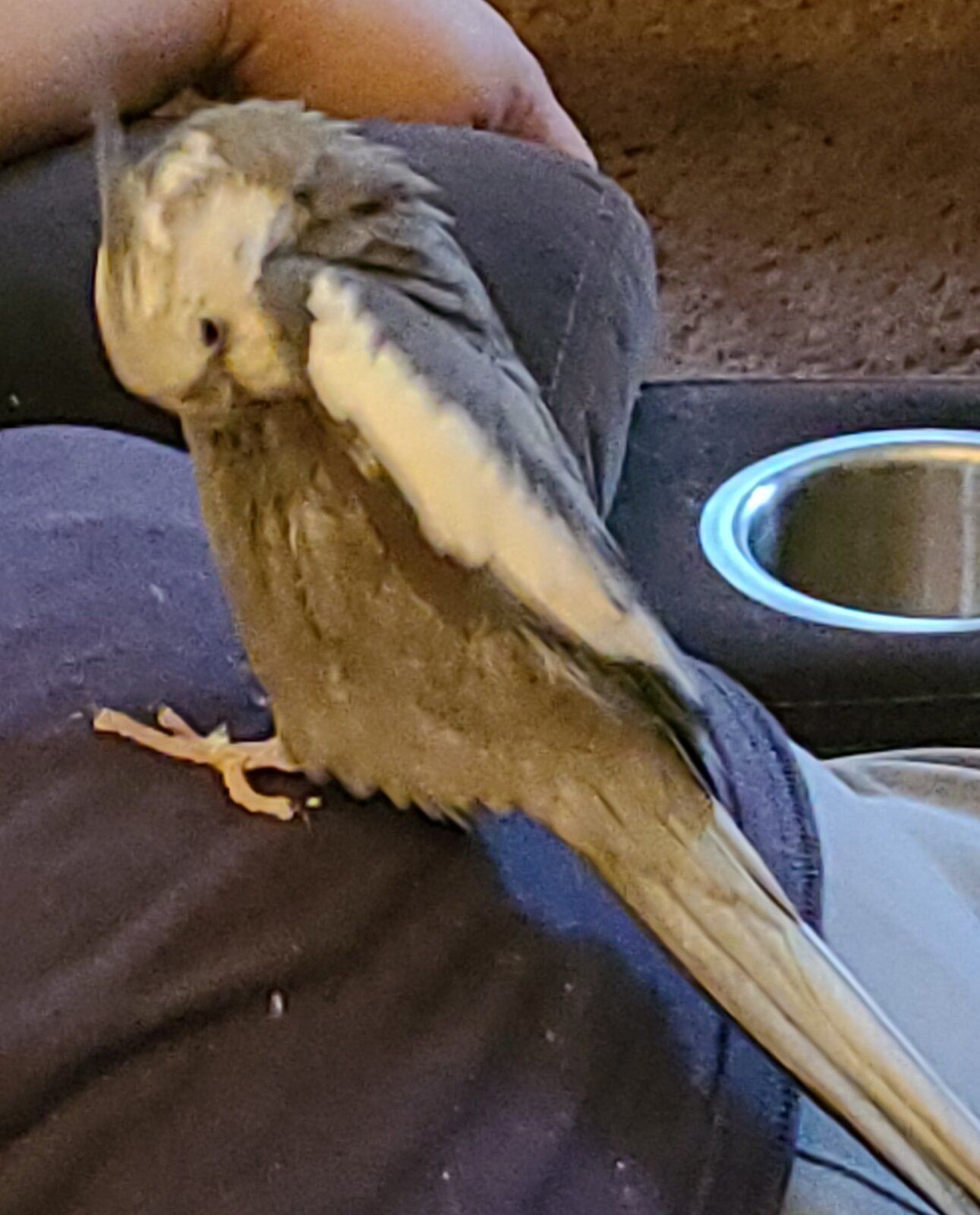 Update Tulio is now willing to sit on me this is great progess in his taming journey!!

I like the name “Hawk” for a green cheeked conure. I was surprised by how much my (late) green cheek Oscar resembled a statue of Horus the Egyptian hawk god.

And Cricket? What were you gonna do? She wanted to go home with you.

I haven’t been in the situation of viewing and meeting many new birds. But I am ok with that.
OP 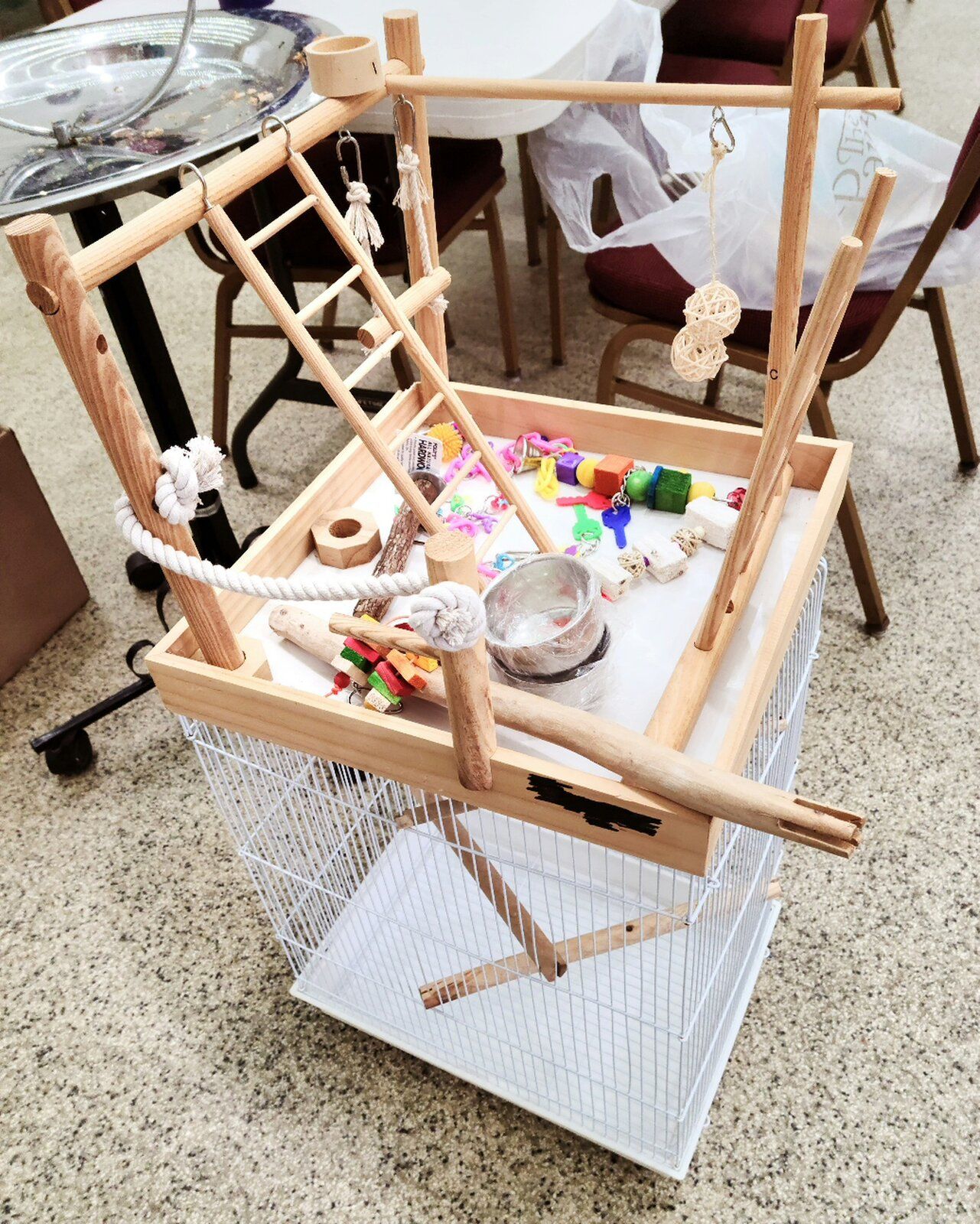 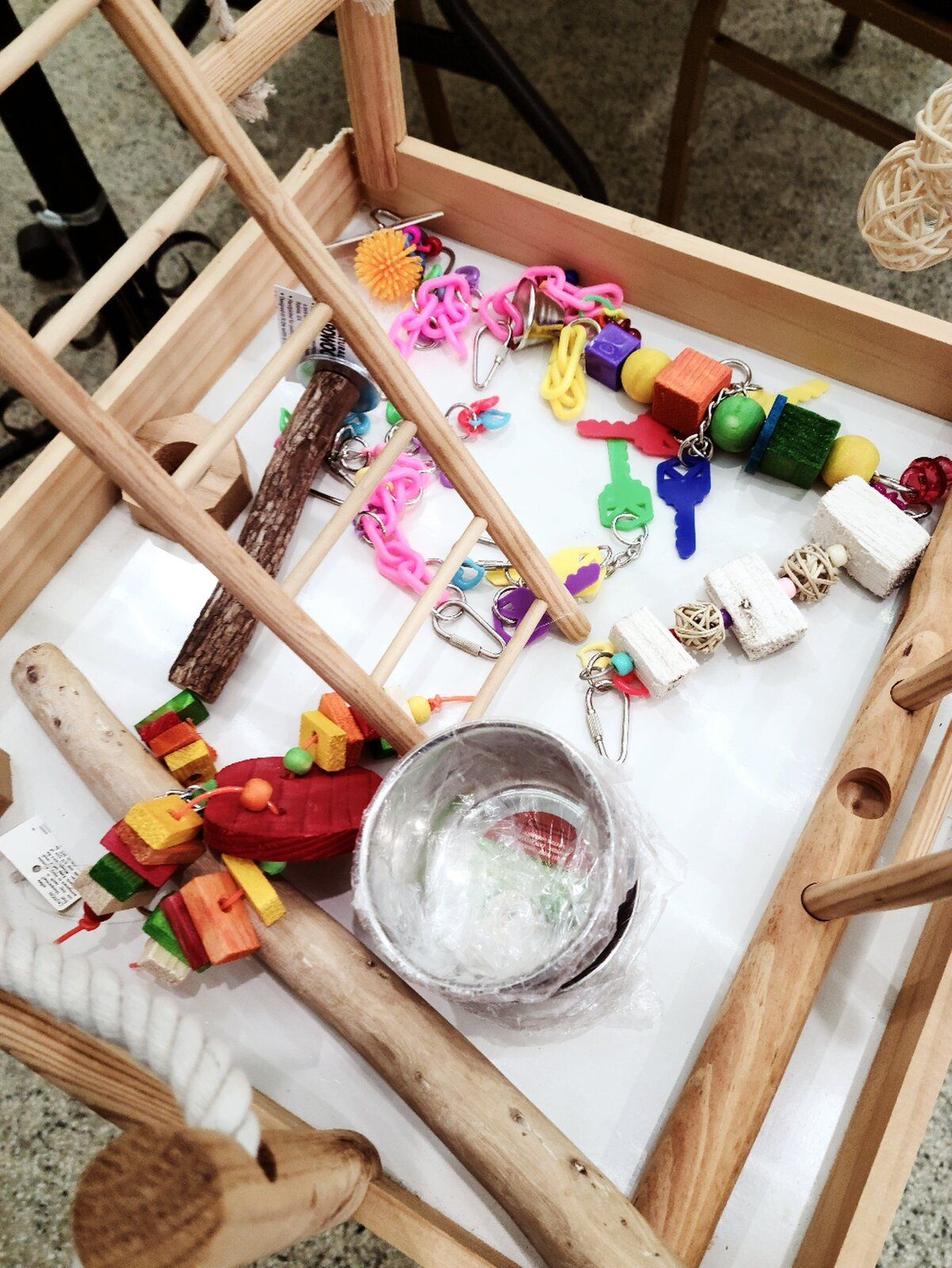 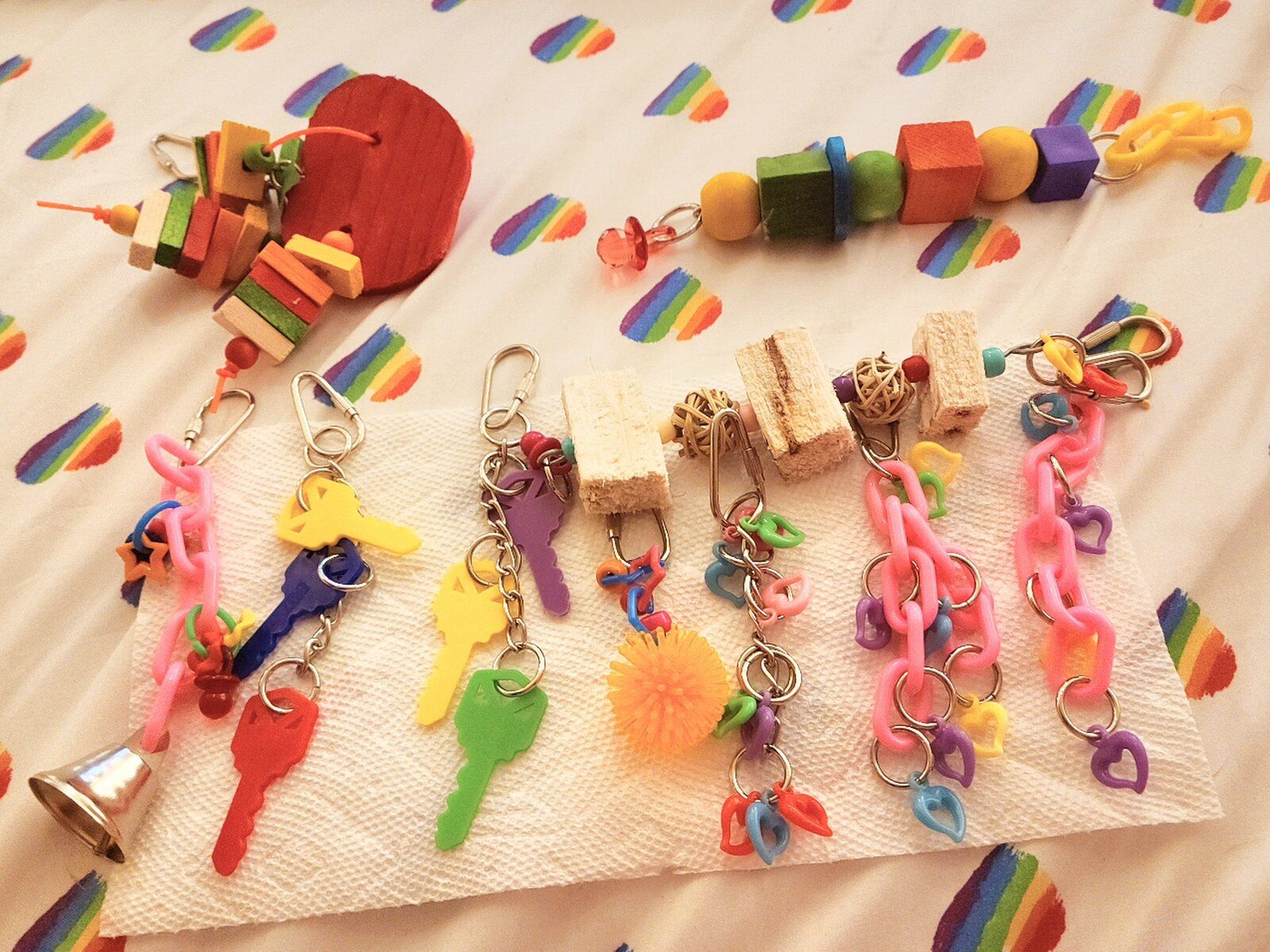 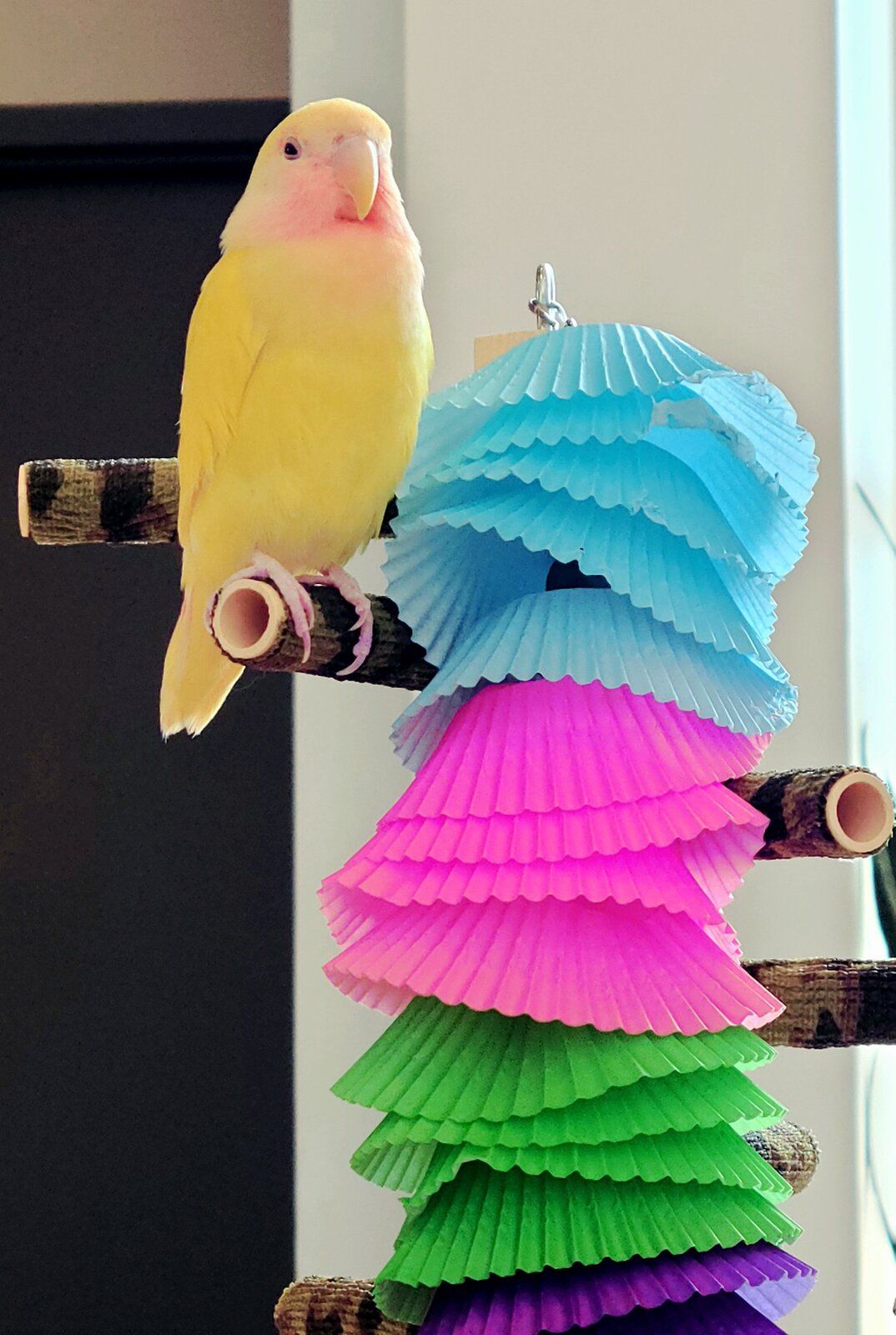 Holy cow! How many birds do you have to play with all that stuff? Or is it just the one, lucky lovebird?
OP

HeatherG said:
Holy cow! How many birds do you have to play with all that stuff? Or is it just the one, lucky lovebird?
Click to expand... 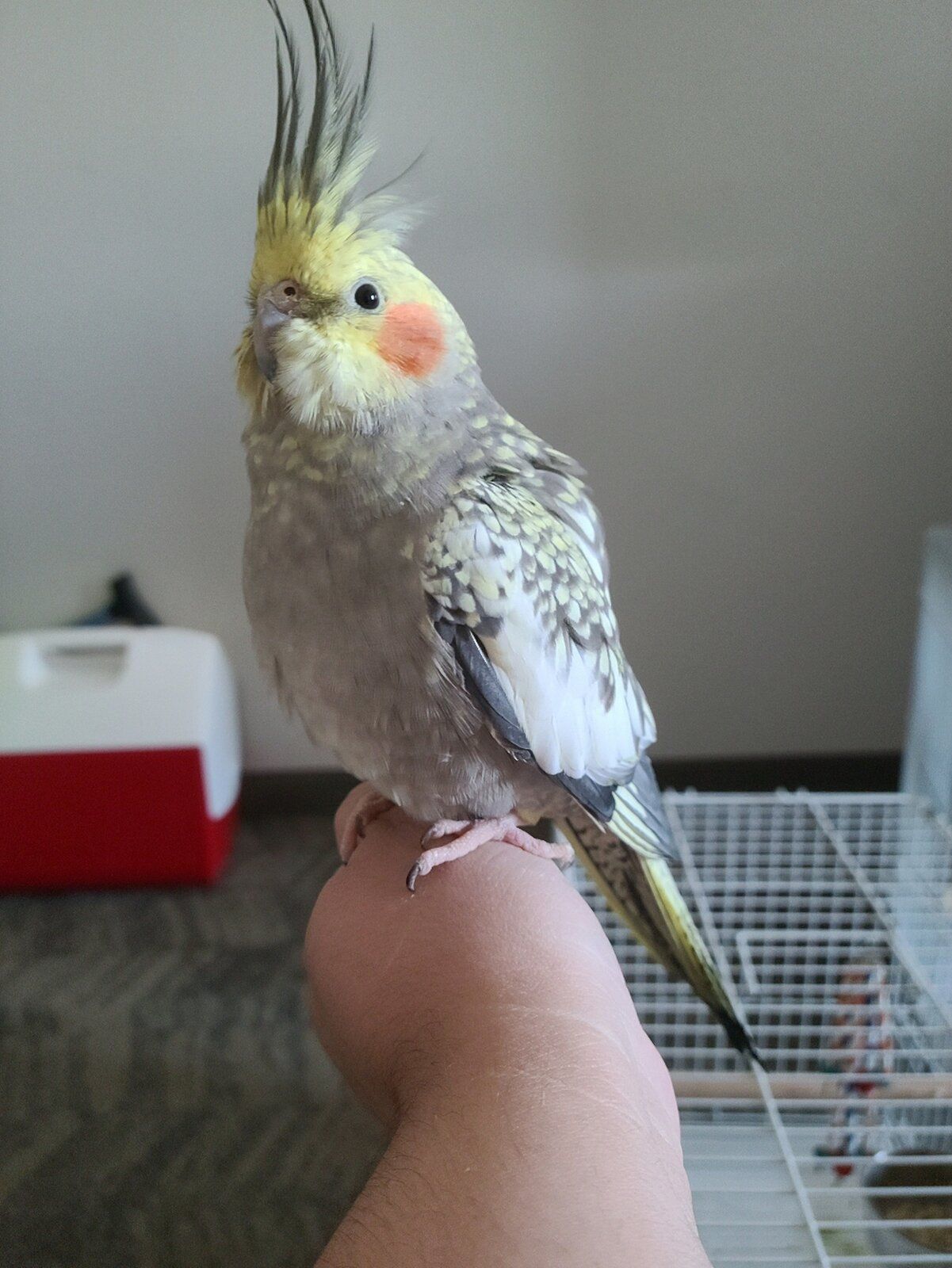 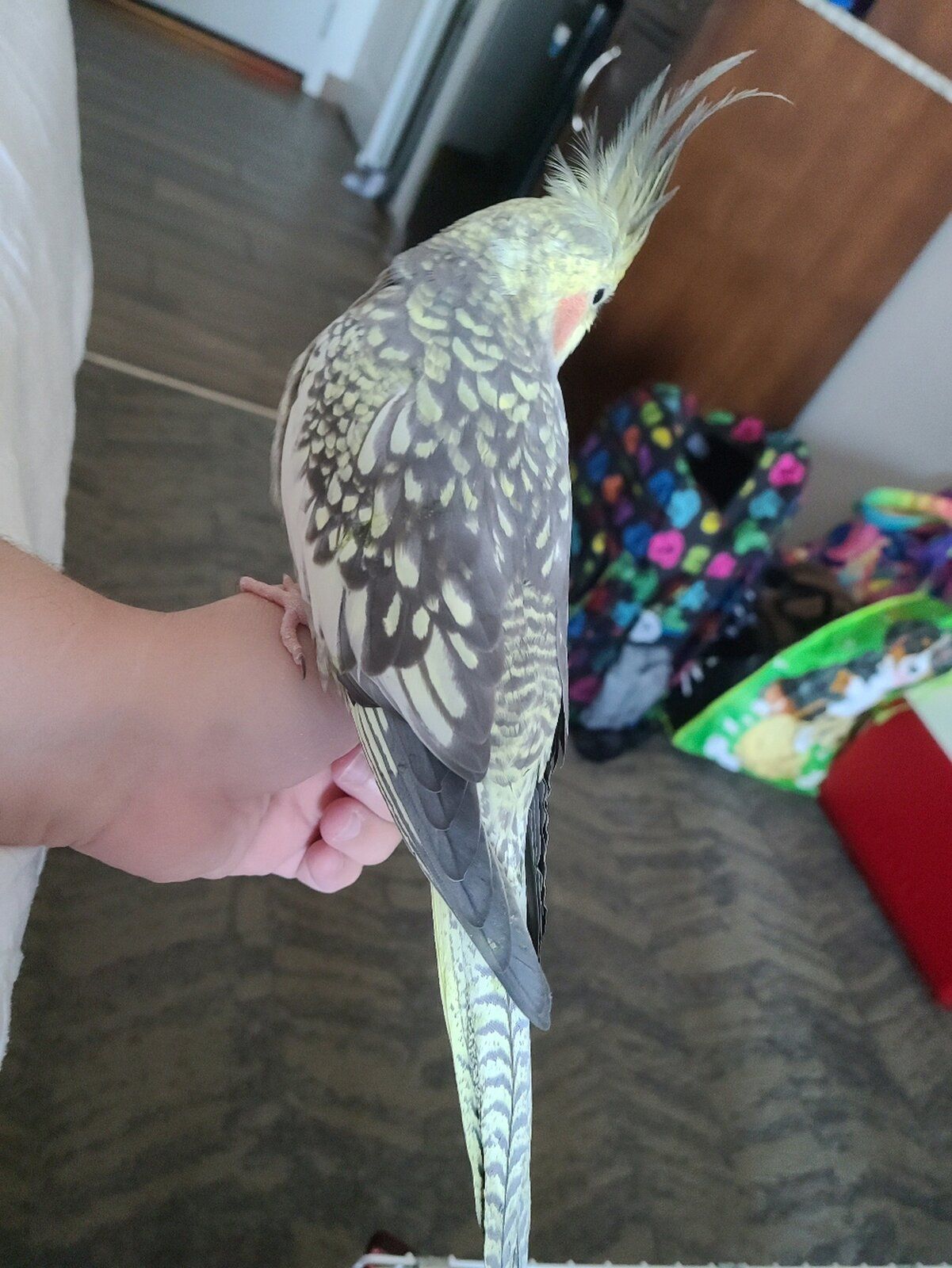 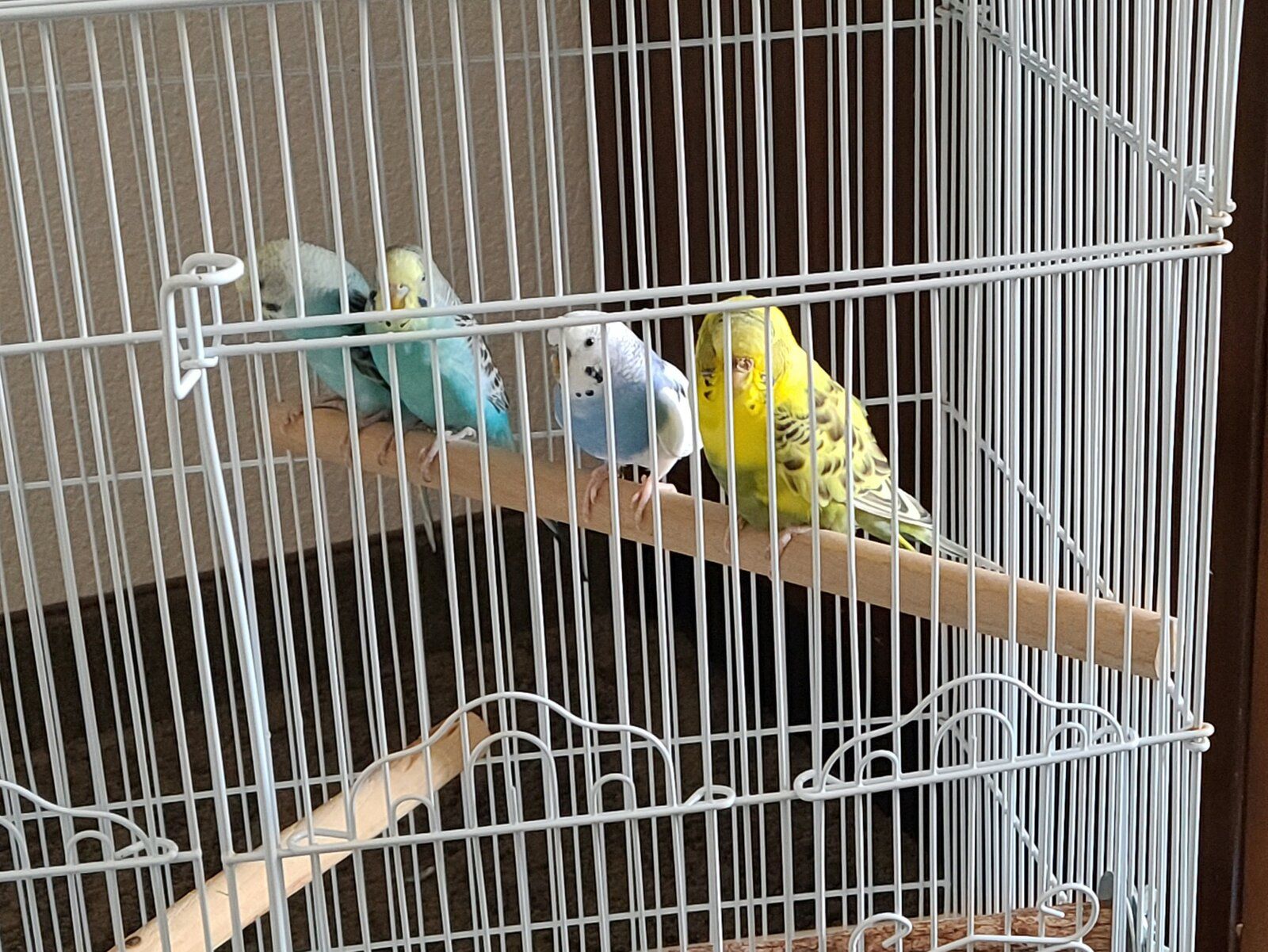 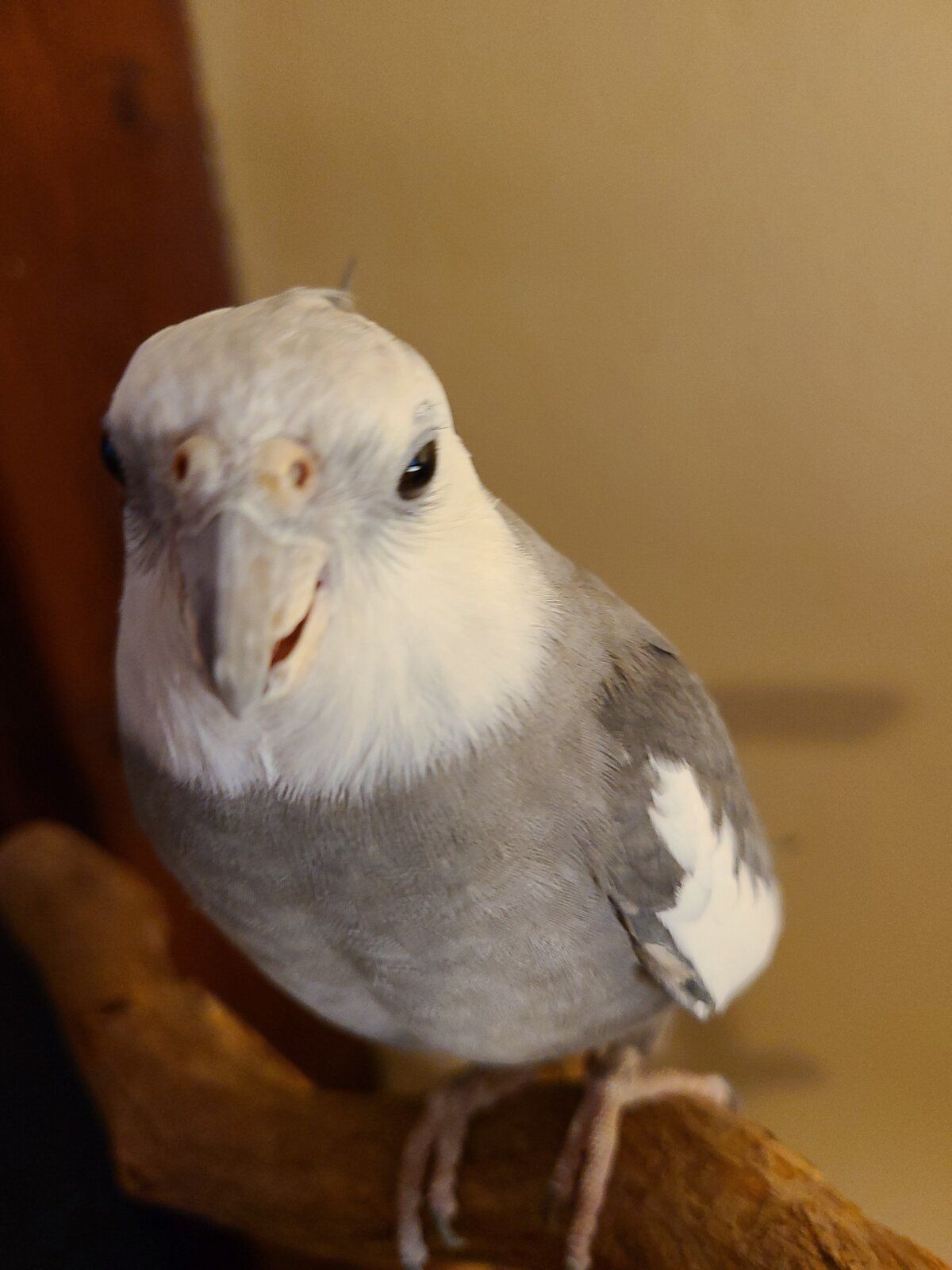 She says nope not takin your bull today 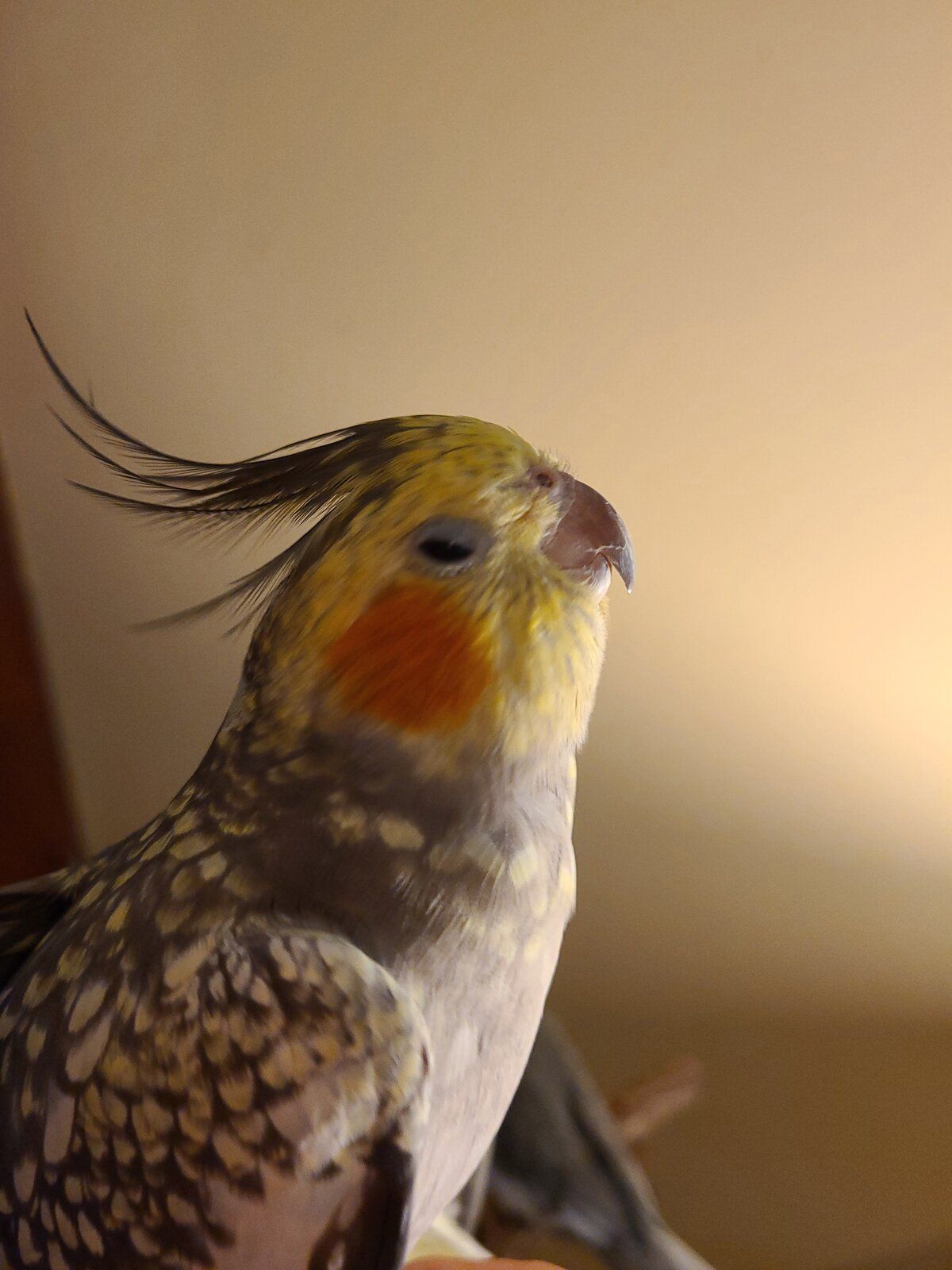 Vincent I hate to tell you but you have MBS, a serious condition.