I'll start off by saying my eclectus parrot is a male anywhere from 15-18 years of age. He was adopted, and was rehomed 3 times prior to me adopting him.

Nico at first for 3 months was pretty leery of me. He came out of his cage slowly, he hated getting wet, he became agressive if anything was pointed at him (which made clicker training hard), he stayed on his stand (watched out the window), and I could tell right away that he was very distrusting of people. He was so shy, and completely the opposite of my conure.

Now Nico won't leave humans alone, he wants to be held constantly, he does the ekkie scream if he isn't being held, he runs out of his cage first thing when his cage is opened in the morning, he does the ekkie wine if he doesn't get his shower as the second thing in the morning, he runs down his stand to be with people. He will not stay put if I'm in the room. He has a broken wing so he can't fly but he follows me around my house like a dog would. When he wants to go outside he goes to the back door. I live in a colder climate so this will probably cause behaviors in the winter I'm assuming. He also trys to regurgitate food, and shake his tail feathers quite a bit. He will jump from anyone holding him to get to me. There is nothing shy about Nico any longer. This has came out the last week or so. I've only had Nico for 3 months. I am home full time with him so he is only locked in his cage at night.

I am just asking for a discription of other people's ekkies behaviors to see differences. That way I can get a baseline on Ekkie's then go from there. Thank you everyone for your help. I really appreciate it.
OP 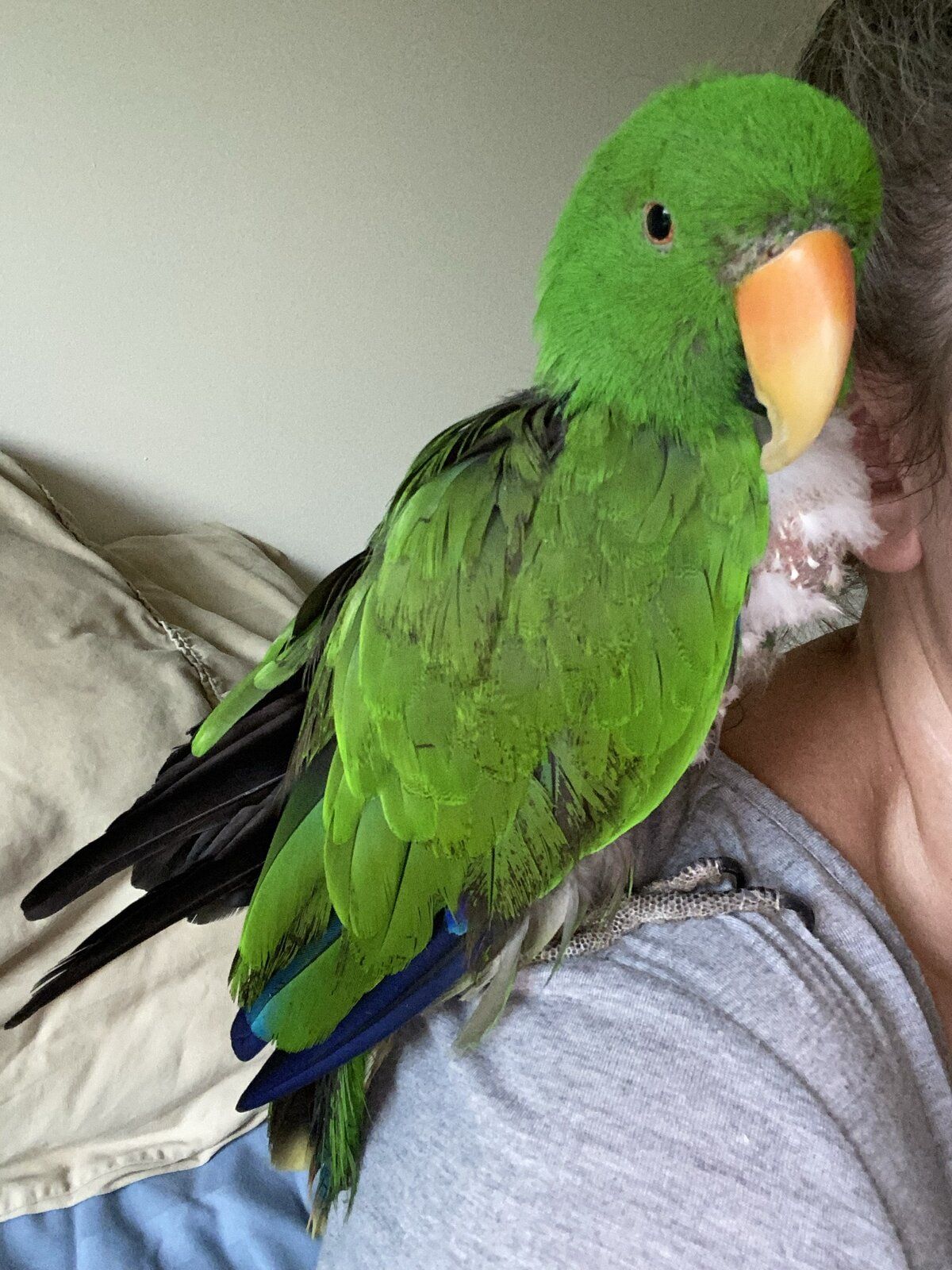 Thank you from Nico as well

How gorgeous is your Niko.
I’m a first time Ekkie parent (Nitro is only 5 months old and has only been with us 3 weeks now) and can only hope he will be as enthusiastic about ppl as your Nico. We’re taking things slowly but he is currently becoming a little more inquisitive. Although my daughter and I are with him for longer periods of time throughout the day, he seems to have chosen my partner as his human! The second he walks in from work Nitro let’s out a squawk, my partner says hello and nitro replies with another squawk. It’s like they have their own little conversation. He doesn’t do this with anyone else but him. It’s not an ear piercing squawk but I’m putting it down to him really liking my partner (and hoping it doesn’t turn into a squawking problem in the long term. ) He loves to snuggle with him and has started to preen his beard and eyelashes whereas in the last couple of days he’s given me a few signs that he’s just happy sitting on his perches and not being touched by me (unless he sees me preparing his meal and then he is happy to get on my shoulder and watch what I’m doing.)
He absolutely hates target/clicker training, seems to be afraid of the target atm.
He also doesn’t seem too keen on his toys (I’m sure we have now bought every item in the shop!). I’m not sure if this is because he is still young or he doesn’t like the variety we have purchased.
Looking forward to seeing his personality grow over time!

Nitro.the.Ekkie said:
He also doesn’t seem too keen on his toys (I’m sure we have now bought every item in the shop!). I’m not sure if this is because he is still young or he doesn’t like the variety we have purchased.
Looking forward to seeing his personality grow over time!
Click to expand...

What a handsome boy!

sounds perfectly normal to me, males can be clingy sometimes.

there’s also an issue of overcompensation as well that happens occasionally with rehomed birds. They take time to adapt and adjust to a new home, but once they do the initial period can be intense. They can quickly come to see you as their mate, and act accordingly.

which says nothing of the natural hormonal tendencies you’ll need to learn to deal with.

key here is encourage the bird towards some degree of independence. Don’t let him overbond to you - remember that you have a wild animal in your house. Adjust accordingly. Don’t be fooled by the attention seeking; attention seeking in parrots have very different psychological roots than in dogs.

Awwww, handsome boy, Nico! Honestly, I'm not hearing anything out of the ordinary as far as his behavior. He was rightfully untrusting of people at first. Given his history, totally understandable. Sounds like he is forming a beautiful bond with you so far. As far as being handled, don't feel bad, it's quite common for ekkies to not care for it. Doesn't mean anything as far as whether or not they like you, just a preference on their part. If he does allow petting, first off, head and neck only. Anywhere else is considered by them as sexual in nature, and promotes those nasty hormones. Also, standard ekkie thing, front to back only. They almost universally hate when you mess up their "doo." If Nico is happy to be with you a lot, I'd check that off as a win. Many folks here have wonderful binds with their birds, yet can't touch or handle them at all without being bitten. My experience is that they love to be kind of in your face. They're really good at reading you, and watch your expressions and mannerisms closely, all the time. I truly believe that they don't just look at you, they see you. As in, YOU, right down to your soul. My first ekkie, Patches, taught me that.

Now, that scream. If he screams to be picked up, and you pick him up, he will continue to scream to get what he wants. Picking him up rewards him for the scream. If you want it to stop, even though it's hard, ignore it. 100% ignore it, consistently. Go to pick him up after he stops, or if he makes a different sound that's more acceptable. The trick is to teach him he won't get what he wants by screaming, but he can get it by doing something else, or just by being quiet and well behaved. Treats, praise, make a big deal of his good behavior.

Regurge is pretty common hormonal stuff, and especially in male ekkies. Feeding their women is hardwired into them, and is sort of their function in life. So, it's kind of an honor that he sees you and wants to feed you, but likely because he sees you as a mate. Please try to discourage it. Tail shaking? My guy Tucker shakes his tail just before he's about to poop. That's completely different than shaking/rubbing on you. If that's what's going on, hate to tell you, he's masterbating on you. That's an absolute no-go, and he needs to know it's not acceptable behavior with you. Besides the obvious, it's also frustrating to them, and can definitely cause some aggression or biting issues when those hormones are raging.

Hope this helps some. Please always feel free to post more questions, and of course, more pictures of your handsome little man.

Tikitiel said:
there is a way to train a bird to play with toys you reward at first but then it becomes some sort of self enjoyment
thats actually how i got tiki to play with toys
Click to expand...

Thank you for the reply. We’ll start working on this slowly today
OP

Thank you everyone for the responses. I'm hoping to get more on ekkies in specific. These little guys are so different then what I'm used to. I know it sounds bad, but my Nico is more like a dog then he is a bird. He also is very emotional, and sensitive I'm learning. He will not eat for anyone else but me, and he also doesn't like to be held by anyone but me. I do agree with the above response about how Nico is seeing me as a mate, and not so much as his handler. Yes, my ekkie loves being pet, held, snuggled, and so on. I think he's confused that he's an ekkie not a dog. Ekkie's seem to be more rare in the United States so its really hard to find people that have experience with these little guys.

You got two great eclectus specific responses from very seasoned owners. Not sure what more you might be looking for? Ekkies are unique, but there is also much overlap with other species as well, to the point that that reasonable minds could debate the degree to which you might call them “different”.

in most instances, eclectus behavior is very much like other birds. Clinginess? Universal. Hormonal after adoption? Not in every individual bird, but Universal across species barriers.
OP

I am trying to learn a lot about Ekkies because mine feather plucks, and has health issues. I've done a fair amount of research. There are owners that have their ekkies on wonderful diets, routine vet care, and some ekkies still have health issues. Feather plucking is very common in ekkies in specific. Health issues are very common. Ekkies from what I've gathered die in their late 20's. This is just some research that I've done. The only way to really learn about these guys is from other owners who have ekkies, and vets who routinely have ekkies as their patient. There is so much misinformation on the internet. The responses above are excellent. I am just hoping with multiple responses that I can learn more about ekkies, and maybe it will help someone else as well.

I see, you’ve pivoted from the original topic and are asking essentially for “best tips for eclectus care” beyond what you’ve asked about above about “is this behavior normal”.

You aren’t well served by starting a thread on a narrow topic, then trying to broaden it out to generalities in such a manner. Best posting practice: I recommend narrowing down your requests to one or two specific issues on a given thread to get more quality advise. If you’re concerned about the plucking specifically, start a thread targeted for that. Confused about an online contradiction? Start a thread about it. It helps keep a thread focused and to the point. And makes it easier for other people to find as well, in case they themselves are searching for similar answers.
OP

Thank you for the tips I appreciate it. I will start a new thread about feather plucking, and online contradictions. You are correct it would be more to the point.
You must log in or register to reply here.

Plants that are parrot safe?!?!