Hi everyone, I wanted to start a new thread about feather plucking. I know its a very debatable subject. There is so much that goes into why a bird will feather pluck. I also have done a substantial amount of research to try to help my ekkie Nico. Just because at times he pulls out blood feathers :-(. I will say when I first brought him home, and I woke up to find blood on the bottom of Nico's cage I cried, and was scared. I was not prepared for that. In my research I found so much misinformation, and contridictions. Alot of my research that I found online suggests that diet is the main reason for feather plucking. Other research suggested that ekkies just dont do well in captivity. There is information about ekkies needing a veggie diet, and other research suggests they can eat a regular parrot diet (mostly pellets). I'm a very confused ekkie owner. I take things day by day. Does anyone have experience with a ekkie who feather plucks? Was there anything in particular that helped?

Plucking is very complicated. There's a huge range of things that might cause it to start. The other part of it is that even if you figure out what started it, you may not be able to stop it. It can become a habit, and very hard to break. Whatever started it, plucking gives a quick endorphin rush, and they continue so they can keep getting that.

Now, diet... Yes, a possible culprit as it can cause blood levels of various things to be too high or low. Calcium and vitamin A are big ones, but again, not the only things. Otherwise, stress is a common cause, boredom as well. Also, what is his sleep schedule? Very important.

Hormones... You mentioned in your other thread about Nico liking petting/snuggling/cuddling, and that he probably sees you as a mate. If you're petting or any of that stuff anywhere besides his head and neck, he sees that as sexual in nature, and that will cause lots of frustration (stressful) for him. Humans are not capable of satisfying THAT need, so yeah, very frustrating to him. It's a common discussion on the forum, and really boils down to sticking to head and neck only.

This is really tip of the iceberg, but some thoughts to get you looking in the right direction, and some support from one of us who's been there. We have lots of members here with plucker experience. You're not alone
OP

Nico has his cage in a guest room. He only goes in there at night. He sits on a stand/parrot gym in the livingroom during the day.

Nico medical issues are a broken wing, he had a bacterial overgrowth (infection) on his skin. His vet treated that with medication. He isn't a dust ball anymore. He does have elevated labs. It is believed that he has boronavirus. I think it was active, but now its not? I don't quite understand much about that I got overwhelmed trying to read about it. He had an overgrown beak as well. He is on medications, and will be for the remainder of his life.

His diet conisists of pellets, veggies, and fruits sometimes. Nico doesn't like fruits as much as he does green beans, or red peppers. We had a very rough start with his diet because he loved his seed mix. He also grinds all of his pellets into powder, and then puts the powder into his water dish to make it mushy. It was advised that I avoid giving him mushy foods as it can trigger mating behaviors. That's been a challenge.

Yes Nico does regurgitate a lot. He did at the shelter as well. He'll even do that on his stands in his cage. He is very into his mating behaviors, and even shakes his tail feathers on soft blankets. I don't quite understand that.

Nico does take baths, and that was a huge accomplishment for him. He hated getting wet when I first adopted him.

I will never know Nico's background. The only information I can give is that he was at 2 shelters, and 3 different homes. Someone loved him because he talks a bunch, and loves just interacting with people. He was very attached to the lady that ran the shelter I adopted him from. He followed her around all day prior to me adopting him. He really loves people.

I'm not sure what I'm doing wrong at this point that he continues to feather pluck. I'm not sure if it's now a habit, and it will just take time to settle down. I don't really care if feathers never grow back, but I can't imagine that feather plucking is healthy. From my understanding feathers are a birds pride, and joy.

In human, a fever may be caused by many many reasons. Some of them are infection from virus or bacteria, or overheating sun, or other illness. The doctor will have to find out the real cause and treat it. I think this is also true in feather plucking. All of the information is correct at some point with some individual bird. But which is true for our bird, remains a mystery.

I wish there is a single easy solution to feather plucking. Say, If only the bird could tell us what would help or why did it happen? Since we all are muddling through this guessing game, close observation and conclusion....endlessly pondering....the best strategy, I think, would be.......

1) start at the beginning of the list, to rule out all the fixable problems one by one. 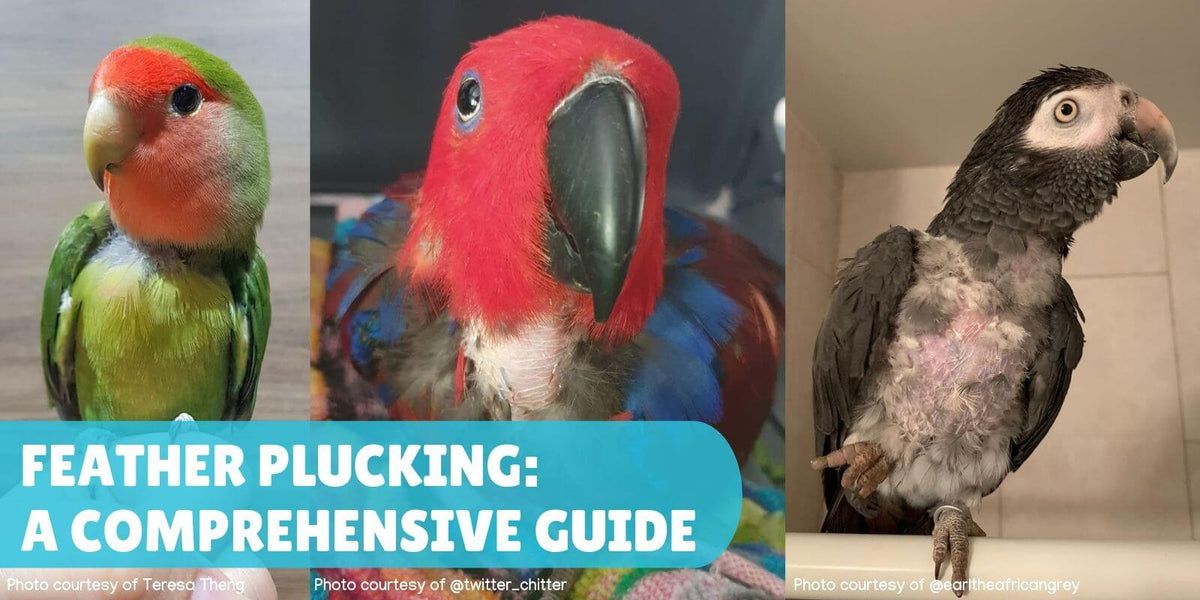 My parrot is feather plucking! What can I do? (A comprehensive guide)

One morning, my sweet Emerald looked me in the eye, and pulled out a blood feather to wave in front of me. Luckily I have read about this. So I looked at her calmly, pretending that I don't panic and asked "what is it? Don't do that. NO."

But of course, I panic. So later, our family get in to discuss, went through the list of possible causes, one by one. Is it health, food, boredom, .....and so on.....

After ✔we are through with a couple of lists, it boiled down to the fact that, we all went out the whole day, yesterday, without her! Then some one said that a blood feather was found on the floor last week too. We checked the calender and we all went out that day too.

3) identify new things that was introduced before the plucking.

4) if there's nothing new, then maybe something is missing. For example, if someone say the bird already has toys, then I would ask is the bird standing near them, playing with them? If not, then, from the bird's point of view, I DON'T LIKE IT or there is NO NEW TOY! For Emerald, diffenition of toys is the thing she rush to.
Her all time favorite is tamarind seed, which she delicately crush and peel the hard outer crust to bits just for fun.


4)And bingo, remove or tweak that new thing or bring in new things to distract.

When our family agreed that Emerald pulled out a blood feather the day after we went out without her, we called this the cause. Now, to fix it, we tried many strategies and things. It is an on going, Never-ending process of trial and errors.
While we are at it, we agreed that she is spoiled rotten. But what can we do but love her!! And in the process, we have about 7 to 8 momentos of blood feathers in a jar.

Finally, luckily, one of the trial worked with Emerald. Yes, we can ALL WENT OUT for as long as 26 hours, without her and no blood feather too. Just as long as we tell her so. (I didn't think of this, I read about it a couple of times and tried it out. And I was surprised that it worked.) So far, no more blood feather, finger crossed.

Before we go out, we also take turn to tell her just to see. Yep, it works every time no matter how you say it or who say it. When I tell her, I would literally say, "Emerald we are going out, it's going to be many hours. Do you have everything you need? Food, water, safe toy? Love you, stay home." And when we return, we say hello.
OP

Parrots really are attached to their flocks. Sense they aren't in the wild. We truly are their flocks. I only find feathers in the morning when I go to open Nico's cage, and to get him ready for the day. He primarily rips out down feathers. I find at least 10-20 each morning. The blood feathers is very few, and far between. I do have to agree with you here. I don't think Nico can stand being alone. Every once in awhile I put him on the top of his cage during the day if I'm downstairs. He will run down his cage, and out into our livingroom. He will search, and search until he finds me. Once he does find me he calms down. Even if he see's anyone else he just keeps searching.

Nico reminds me so much of my Patches. Different in that he was a lifelong plucker well before he found me. I always got so excited when he'd start growing a new bit of green on his chest, or a new tail feather, only to find it gone next time I checked on them. He was super attached to me though, also climbing down from his cage to come looking for me. Cutest thing ever when he wandered the house, looked at other family members and said, "where's Jon?" and continued until he got to me.

kme3388 I really feel for you. None of my parrots have ever plucked, but i empathize with anyone who has this issue with their fid, it must be extremely frustrating. If you are lucky enough to figure out the root cause, at least it can be addressed, but as pointed out, sometimes it's gone on so long that now its a nervous habit and really hard to break. Its one of the reasons I always tell folk with parrots going thru puberty (which can last months and months) to not let undesirable behavior become a habit, like biting or screaming.

Make sure you are reading and using information from a trusted source when dealing with plucking, there are lots of snake oil type treatments and advice out there on the interweb, I've seen some crazy s**t being suggested as cures. But in the end, we love our fids for what they are, not what they might be, and that is something precious!
You must log in or register to reply here.

Urgent!! blood feather too small to pluck out
2

J
What foods does your eclectus enjoy?

X
What can i do to help my plucking lovebird?