What I know about Hawkheads comes from a little research and two and a half years with Nike. Prior to Nike I had an Orange Winged Amazon for 39 years.

Nike's story is that she, probably a he but I called my previous parrot a she and it was difficult enough in the beginning not calling Nike by my previous birds name, let alone changing the sex. Anyway, I am at least Nike's third owner. The previous owner had her for about 8 or 9 years. I believe that she is in her mid 20's. The previous owner needed to give her up for life reasons so she was not mistreated at all.

I lost my OWA, Berta, in October of '15 and after a month of not waking up in the morning and greeting her I had all I could take and started looking. I just missed out on a local OWA because I procrastinated too long, mostly because my wife did not want another bird. I couldn't blame her, Berta absolutely hated her and even though my wife was the caregiver, Berta would bite her as soon as look at her.

My Daughter at that time was a GM at a PETCO and mentioned that she had a former employee looking to give up (sell) her bird. She said it was a Hawk Head. A what I thought, never heard of it. So before I called about the bird I read up on them and decided I would like to have this somewhat rare and unusual bird.

After a few weeks of phone calls it was time to meet her. My wife was still not sold on the idea and we had a bit of a fight about it right before heading over to the next town to see her. I was pretty determined to get her and had stopped at the bank to get some cash just in case.

Forget about meeting a perspective adoptee multiple times, it didn't happen that way. We arrived at the house and went in. Stood outside the cage for 10 minutes talking to the owner who was obviously sizing me up. Then she said that I could get her out of her cage and not to be concerned of Nike grabbed my finger with her beak before stepping up. So I opened the cage and Nike just grabbed my finger and stepped onto it. I stood there for a bit looking at her and talking to her and then turned to my wife and said..."you wanna try?" Remember my wife had never had a good experience with Berta but she agreed. She held out her hand and without saying anything Nike went to her.

That was it, love at first sight. We bought Nike, her cage and toys and loaded them into the truck and off we went.

Nike had been fully flighted but was clipped the day before so when we got her she was pretty submissive and loving for the first couple of weeks. The kids and grandkids came over and Nike went to all of them but after a couple of weeks she had decided that she was with my wife and I and no one else. To this day she still raises her crest if anyone other and me or my wife comes near her.

So what do I know about Hawk Heads...nothing really, I know about Nike. Everything authorative that I've read says that they make great, loving companions and Nike is all that. Most everything I've read from less reliable sources gives warnings about their beak and bites and sudden striking....Nike is none of that.

My experience has been that my Hawk Head is somewhat independent and can be very friendly when she wants and also likes her personal space at other times. We have her out from 9am till bedtime almost every day and yet when we're busy she's content to spend hours or even days in her cage without complaint or aftereffects.

Nike never strikes without warning. She always hisses, huffs, honks and/or raises her crest before attempting to bite. Her bite, I'm not sure how she would bite a stranger but she doesn't bite me all that hard. I seem to remember getting bit harder in the beginning but now I don't believe that it is a defensive bite, more like a leave me alone bite.

As others have warned the Hawk head beak is quite long and sharp and could easily put a hole in your lip or ear. Nike has only drawn my wife's blood...my wife's own fault. Nike will give a displacement bite if she's on you, hand or shoulder and you bring a phone up to your ear...my wife knows that and has been bitten a couple of times when doing that. Nike also loves to chew on our clothes and we can and have gotten some painful pinches. To remedy that when she get's her yearly wellness check I have her nails and the tip of her beak dremmeled. Just taking that point off makes all the difference in the world...we still might get accidentally pinched but no blood.

Wow, this is getting long, I'll continue in another thread later. 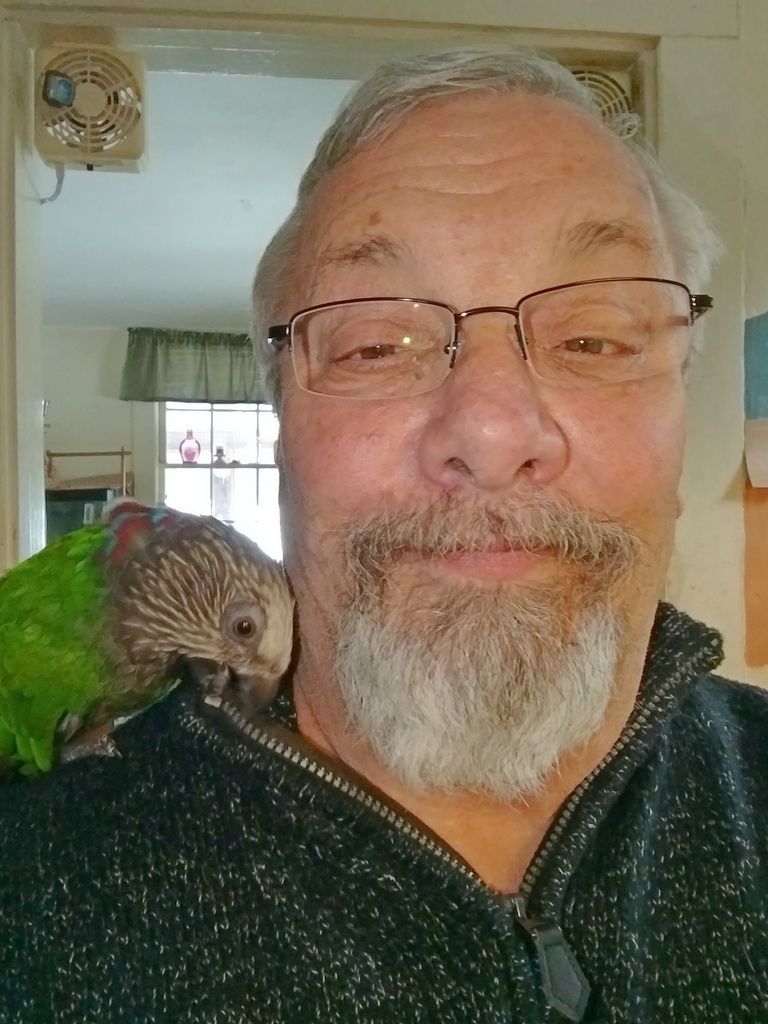 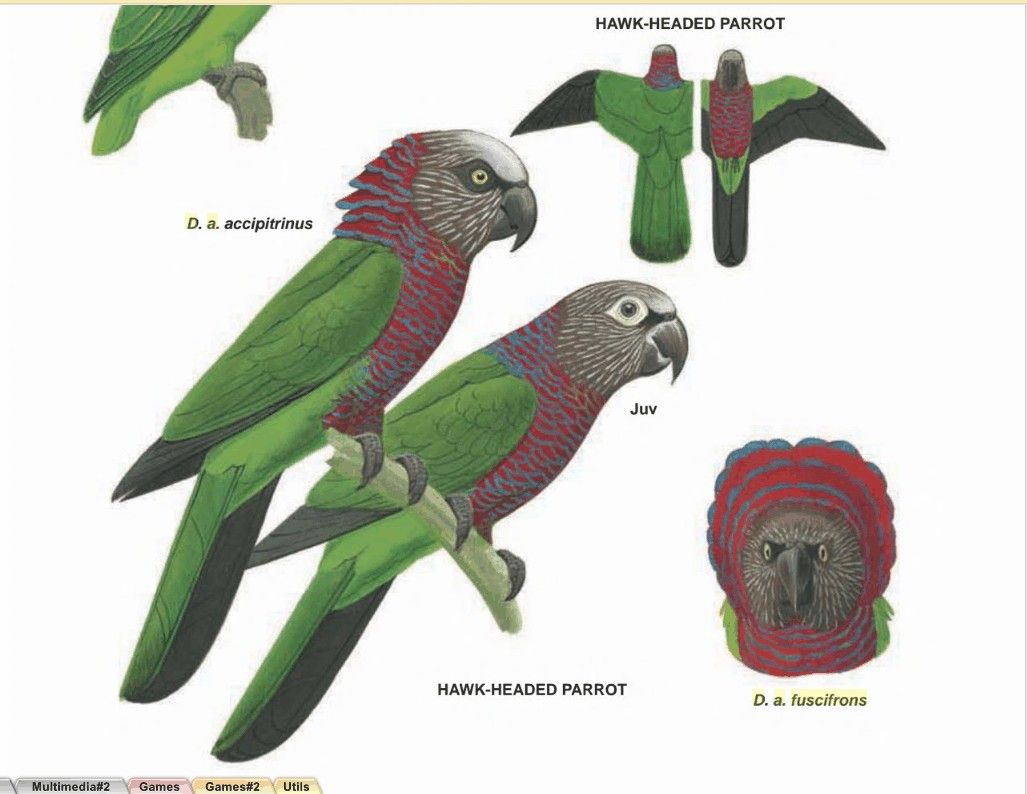 Why am I not surprised that it was love at first sight between Nike and you and your wife? Her closeness to you comes across in many of the pics you post. (Including the one right in this thread. Love that pic!)

I'm glad Nike gets along with both of you. It makes such a difference. Jolly is bonded to me AND my wife, but Maya is only bonded to me... and tolerates my wife. Lol! Work in progress.

I don't know very much about hawk heads myself. In fact, it wasn't until this sub-forum was created yesterday and I'd read the initial post from the Admin that I learned they are also known as Red Fan parrots! So I look forward to learning more about them.

What a beautiful bird...
OP

Playing: Nike hardly ever plays. I don't know if this a Hawkhead trait or just my bird. I have seen Youtube's of very young Hawkheads playing so it must be a learned behavior. I could probably buy another bird with all the money I've wasted on toys that she wont touch

Chewing: Again, Nike is not an avid chewer. I've never caught her chewing on any furniture or windows or the like but she will on occasion chew a toy or in one case, a cheap wooden playstand which she spend hours and days and weeks chewing. I kept replacing he wood and she kept chewing it. Now she doesn't want to go to that stand...go figure. 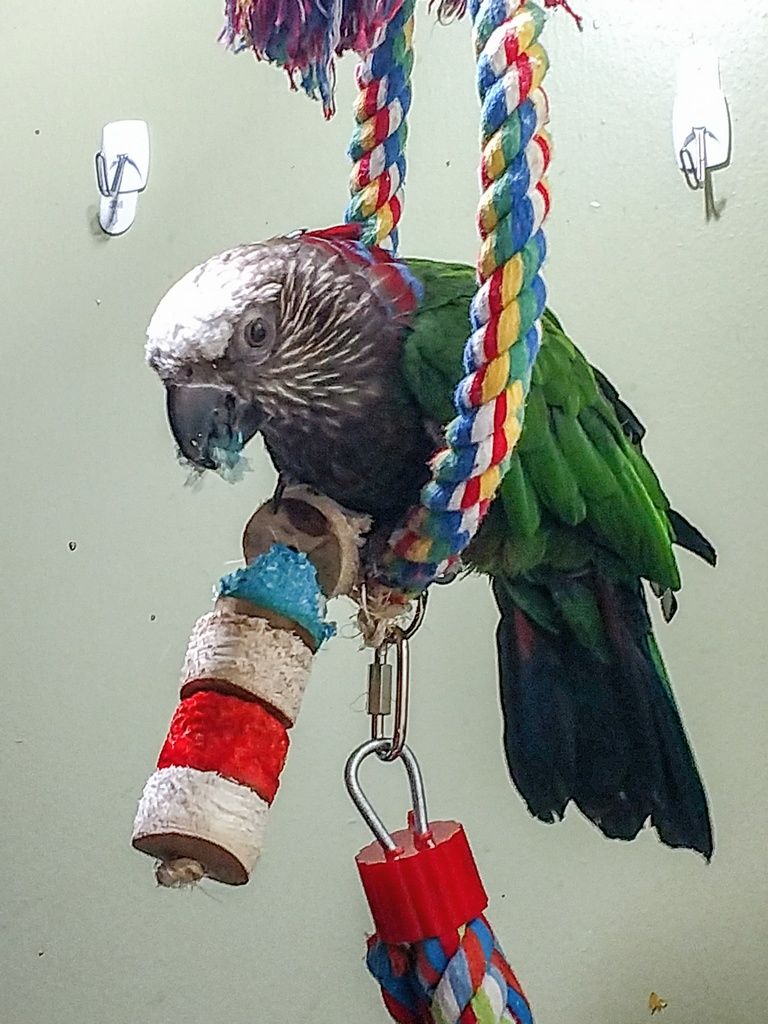 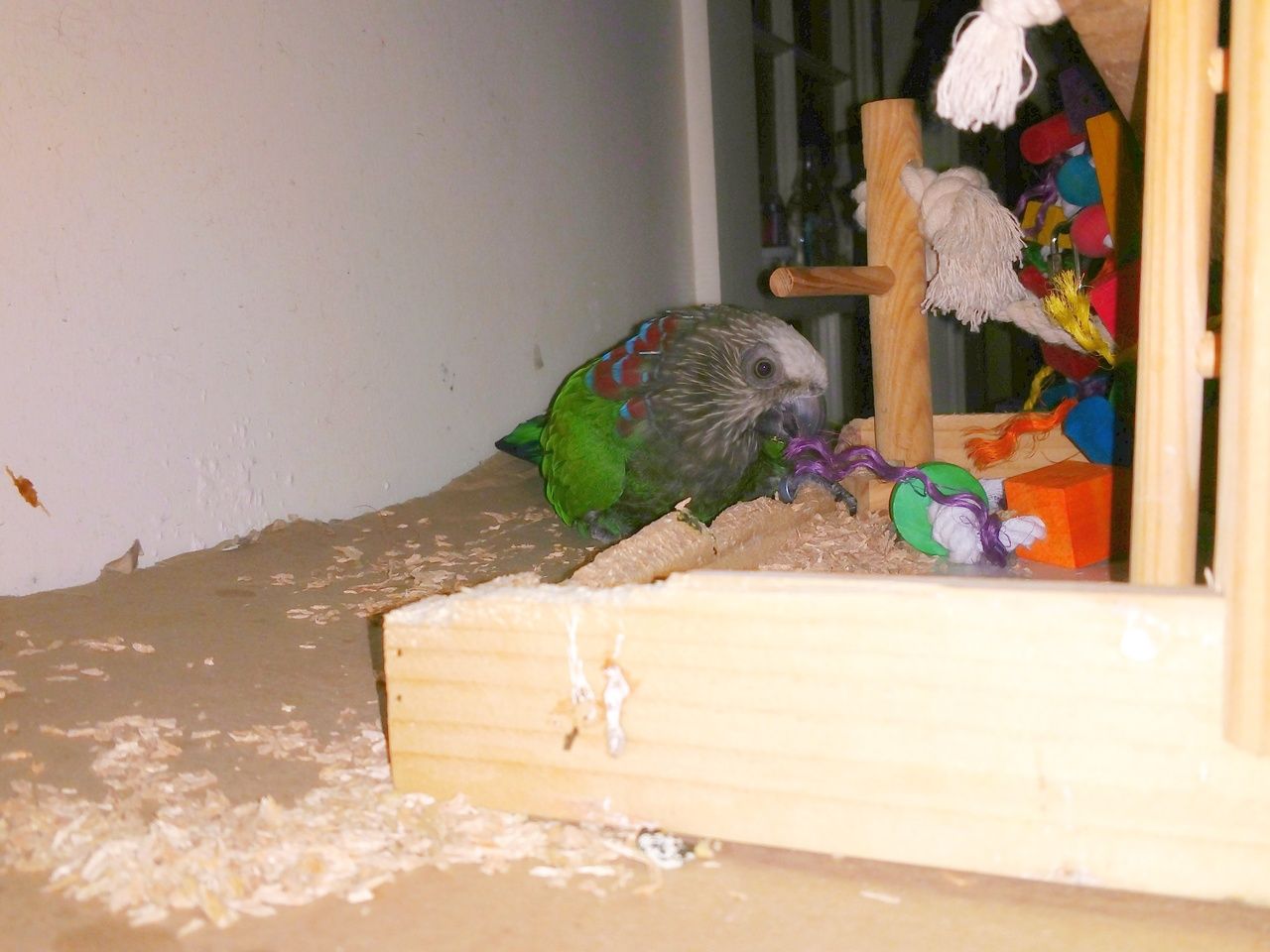 Handling: Nike is not a Caique, you cant grap her and pick her up or put her on her back but she tolerates scratching, belly rubs, petting her back and if you really want to make her hump you, rubbing under her wings. She's fine with all sorts of kisses on her beak, head and back. She dislikes being toweled but really only complains for a second or two and then settles down. 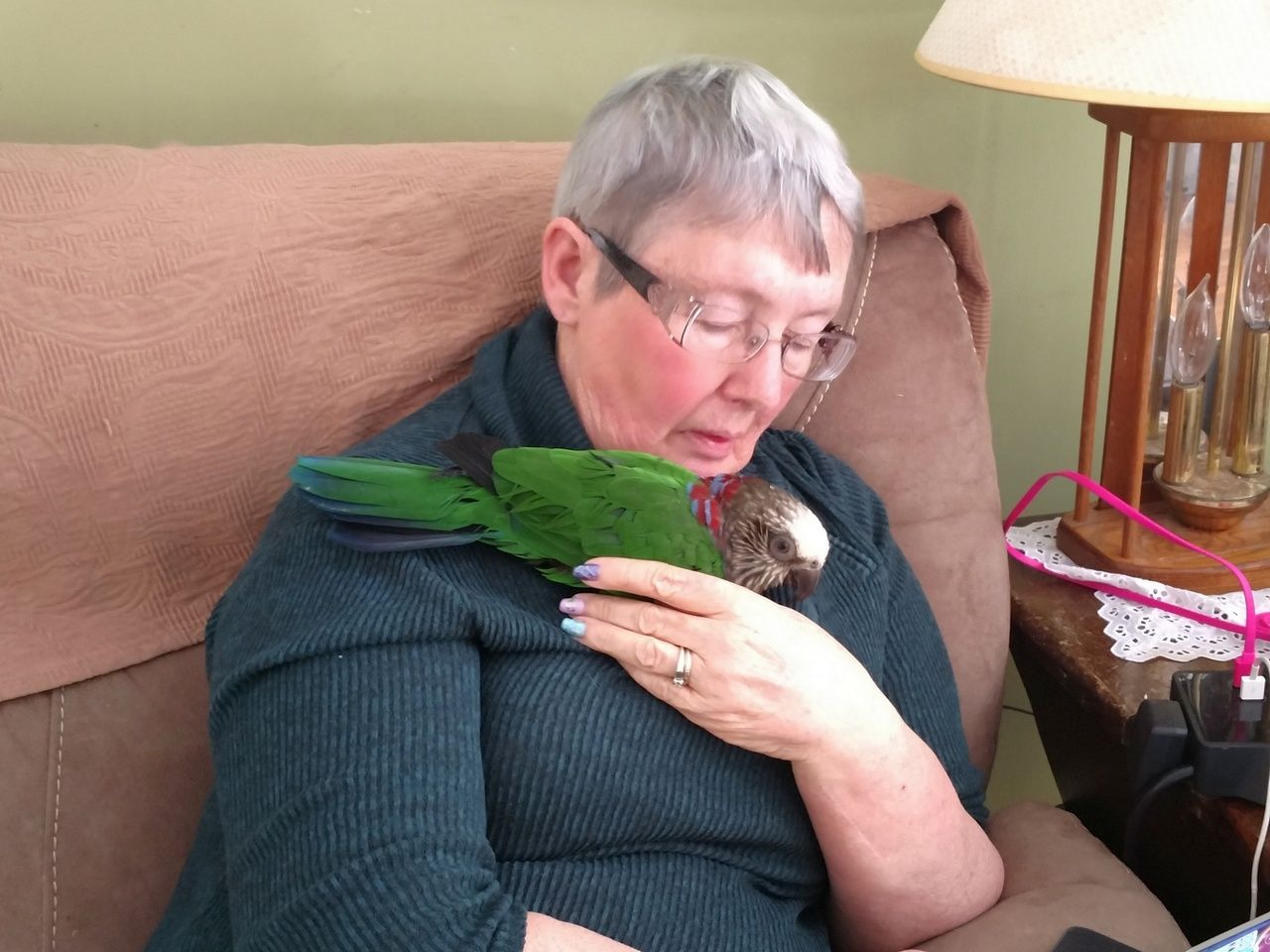 Other birds: Everything I've read says that this is a bad idea with Hawkheads. In the wild they are very territorial. Introducing a second Hawkhead can be done provided you know what you're doing and are ready to remove the new bird if it doesn't work out. They have been known to kill the newcomer even if you add the opposite sex in an effort to get to pair up for breeding. One method of catching Hawkheads was to simply bring another bird into their territory and just wait for the hawkheads to come to investigate....I assume they then netted them.

I'm not sure I'm buying all that he's selling but this Youtube has some good Hawkhead video.

Bill, Nike is what .. around 300 gr? She looks very much the same size as Salty. I really dig Nike!
OP

hanks Al, no she varies between 195 and 200 grams. A little small from what I've read as they are normally about 250 grams.


Your videos motivated me to get a clicker for target training, now to get the motivation.

All I can think of is she's tiny! My conure is heavier than she is! lol
You must log in or register to reply here.

Suggestions for a play stand