Update on the Amazons

Just a short update on the Amazon’s and some multimedia of same.
The Twins are doing well together. In the morning when I open up the cage to let them out only Merlin comes out. Luna stays in the cage most of the time. I had to make some changes around the house to block off some of their perching locations. One area was showing signs that they (Merlin) had been chipping the paint. It could be the modifications has them a little bit scared and not wanting to fly around so much.
Both birds are showing a lot of black stress bars and I don’t know the reason for it. The only real stress these two see is caused by each other. If it’s diet Bingo should look the same but he doesn’t.
Here is a pic I snapped of all 3 close together. 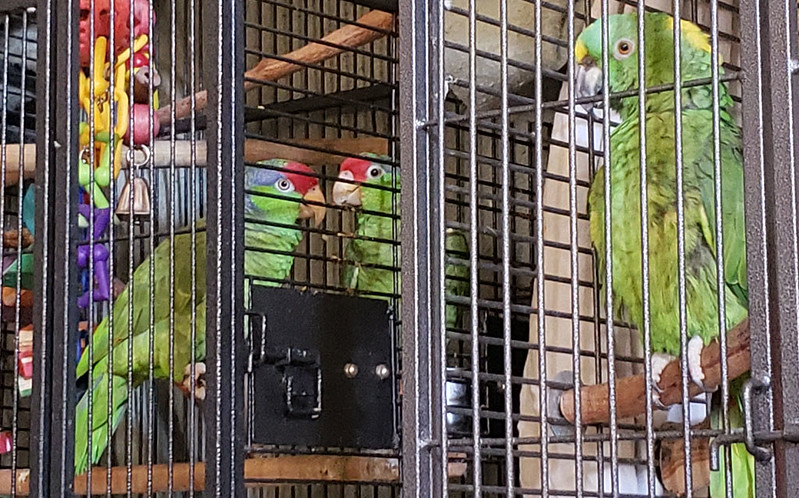 All 3 by wes mcfaden, on Flickr
Bingo also looks to be doing good. No more breathing issues since getting the humidifier up and running. There is nothing really new with him. I tried to do something I have been wanting to do for a long time. I tried video recording Bingo in the shower.
It did not turn out well. I had to prop my cell phone in the window and guestamate the angle and got it wrong. Still not a total loss I pulled out a couple of still shots from the video and it does show Bing in all his glory.

Bingo shower 3 by wes mcfaden, on Flickr
Last but not least This is something I have wanted to catch on video and finally managed it.
I call it the WOW signal. I think it sounds so cute
[ame="https://youtu.be/vqNGJKcu7_A"]wow 1 - YouTube[/ame]

Loved the update, and pics and videos.
One thing may to nit keep the cages mostly covered on 3 sides like that. That can be causing low chronic stress.

They look very happy Wes..Wish Amy would play with his toys like that
He'll only chew/beat on them when I reach in to remove his water bowl. Better his toys than my arm! ( like he used to do )

I didn’t even know that some YNAs develop yellow on the crown.
OP

Laurasea said:
Loved the update, and pics and videos.
One thing may to nit keep the cages mostly covered on 3 sides like that. That can be causing low chronic stress.
Click to expand...

The video was taken in the evening so the twins were partially covered in prep for bedtime. They just weren’t ready for bed LOL.
there are 2 vents from the swamp cooler close to the cages. Even though the cooler is covered onthe outside when windy some cold air can draft in.
In the summer I still need to cover somewhat to keep the direct blast of air from the cooler off them.
Sometimes you just can’t win.

Winning with an Amazon -or- any Parrot for that matter! Only when what they want just happens to 'by default' be what you want!!!

Julio is still on his 'high horse' with being Hormonal! BUT, today he played his card on Mrs. Boats and he learned a serious lessen on who is the Boss of this House!!!
Last edited: Feb 3, 2021
You must log in or register to reply here.