Okay! here we are arround the 1 year mark with rascal the umbrella cockatoo.
Today my and my handsome and stinky boy took a shower together (its not weird I promise ill explain later) and then went outside to lay in the sun and dry. now he's watching me from his perch with his little cheek feathers puffed out looking adorable.

So what's new scooby doo?
first I took rascal to the vet (insert confetti here) we did it! I sat next to his transport cage talking and singing with him while my partner drove. it was about a 50 minute drive each way but we survived, he pulled one primary feather (I think from his head) and 3 or 4 fluffy down feathers. By the end of the ride home he wasn't displaying too much discomfort and stress he was chilling and looking at his food and trying to eat it ( he more of played with it but it's fine). They gave him a good Dremel nail trim, he had quite the grabbers on him. He lets me trim his nails but I was nervous to go too close so they showed me how they should look. the Vet said overall he is in pretty good shape for being almost 40. She commented on his wings muscle condition and said it's unlikely he will ever fly again. which I understand he was clipped most of his life. but otherwise his muscles everywhere else is in good shape. she recommended ways to encourage bathing . That's why Me and rascal were in the shower. He is fine as long as I'm right there with him so i'll stand under the water to show him its okay and he walks up my arm to be close to me I don't force him under the water. We also don't stay there long just enough to get his outer feathers wet then he's rewarded. after that I take rascal and my soggy self and waddle outside onto the lawn where we lay in the sun until he's dry. eventually i'm hoping he will start to enjoy it but well see.

My partner is getting more comfortable around rascal which is great he is willing to pet him and feed him snacks. Rascal is getting comfortable with him too wich is great, were becoming a little flock and i love it. on a kinda sadder note I had to "rehome" some of my lizards because rascal just takes up so much of my time. thankfully the lizards are now living with friends and family so I still can see them whenever.

I attached some images I dont think I can caption them but I want to give a little info about them.

the 2 outside are from the first day it reached 80 up here I LOVE the picture with the dandelion he is so handsome.
the other one outside was him being intrigued by the wild robbin about 20-30ft away. 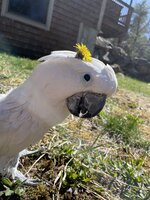 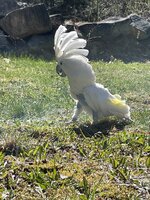 theres 2 images where im petting his chin, he's super weird and likes to bow/ bury his head wherever he can when i pet his face. 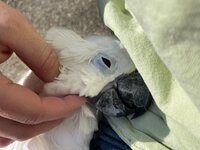 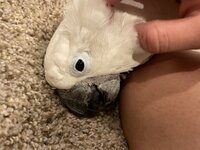 This one is when he's preening my pants, at least thats what i think it was 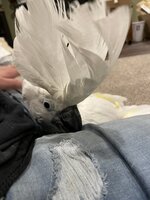 the last photo was when we were lying on the couch chillin and i wanted to take a photo I guess I spooked him. 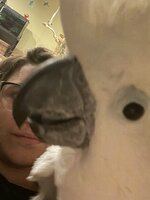 I just want to say.........your username should have been mine years ago!!!!!! I often say say sometimes my birds chirp, sometimes they derp.

What cockatoo is this?

I have soooo many questions!!