I bought Juniper one year ago on September 2. She was falsely advertised as a crimson rosella, one I had been looking for for at least three years. When I arrived at the breeder's, they explained to me that she was a three year old rescue bird that nobody wanted.

So I bought her. She was awfully scared and tried to chew her way out of the travel box/carrier (?), but eventually we reached home. After giving her a few days to settle in, I began to train her. Plucky little bird she was, she made rapid progress and was soon eating the seeds I thrust in between the bars.

She is currently eating from my hands now, but one day she'll step up. Her clipped wings have grown back, and she's finally free.

Here she is a few months ago, out of her cage.

It is common that the Journey of a great Love Story begin with miss-steps and out and out lies. This has all the making of a story that will easily support a continuation. I as others will be looking with great interest to hearing of this story as Juniper continues to open-up and both of your relationship grows!

Thank-you for first bring Juniper home and second, share with us!

Oh she's lovely! I can't wait to hear more about her.

A day after she was brought home: 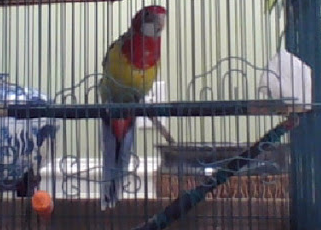 We had to put a cardboard covering over the top of her cage because every time we went near, she would flinch and run away. She adores carrots as well as spinach, we found out. Rosellas are incredible chewers, the piece of cuttlebone shown in the picture, about two inches long, and three-quarters of an inch thick, is all gone already!

Story of the day: I was feeding her sunflower seeds but she kept dropping them because the upper part of her beak was a tad too long. I went to help my mother for a bit and came back to find her industriously grinding away at her cuttlebone with the top part of her beak! She stared at me as if she were waiting for some food. I'm starved, Juniper's eyes seemed to say. "Smart rosella," I praised her, feeding her some more seeds.
Last edited: Jul 12, 2017
OP
R

It's always amazing watching Juniper, and today I found out that she had some trouble cracking the seeds, so what did she do? Juniper quickly figured out that if she gripped the seed in her beak and rubbed it against a cage bar, the husk would pop off and she could crack it from there! Honestly, sometimes I think I'm owning an African Grey in rosella form...
This is literally what she looked like when she saw me:
When I saw her: :52:

Welcome and be welcomed. She is gorgeous. But try to transition her diet away from seeds. The goal is 45% fruit, 45% veggie and 10% seeds. May take awhile, maybe a long while.

Or change the fruit and veggie proportion, but certainly less seed, the better.
OP
R

wrench13 said:
Welcome and be welcomed. She is gorgeous. But try to transition her diet away from seeds. The goal is 45% fruit, 45% veggie and 10% seeds. May take awhile, maybe a long while.
Click to expand...

Yep! I'm trying to transition her at the moment, the seeds were just training treats.
OP
R

She never fails to amaze me with her ingenuity. Just today I was feeding her a bit of carrot, then heard a thud. Her carrot had fallen out of her beak and onto the floor. Peering out from around the corner to see just what she was doing (she climbs up to her perch whenever I come near), I found her climbing up the side of the cage bars with her claws and holding the carrot in her beak! She had picked it up from the ground, carried it back up to her perch, and then proceeded to eat it over her treat bowl so she wouldn't drop it.
OP
R

I've noticed that now when I leave the room her cage is in, a half hour later Juniper starts to chirp and wait for me to respond; when I respond, we continue "chatting" for a few minutes, then we continue throughout the day. She has a special call she uses for me, sort of a high pitched whistle sound. :07:
OP
R

She's *inadvertently* learned how to imitate a noise! It's the click/squeak of a loose tile we have in the house. I thought I was going crazy for a few days and imagining the noise, but I finally figured out it was Juniper!
You must log in or register to reply here.

Jess during his heyday

Arika's world, from the beginning

The story of a girl named Darwin

An introduction and sharing some guilt (LONG but TL;DR at end)

What are the options with a female Eclectus that is unhappy unless she's free to mate?