The Continuing Capers of Companion-ing Cotton

Yesterday I adopted an African Ringneck, Cotton, from a local rescue. His history as they know it - the previous owner got him at 9 months of age and over time he was more anxious and started losing feathers, then plucking. He was diagnosed with a yeast infection of the skin. The rescue got him in December at 18 months of age, completely bald from the neck down, and not at all tame. They began treating him and fed a mix of pellets and seed/fruit/veggie commercial blend, with fresh food offered daily, and calcium powder on top a few times a week. His feathers seem to be able to return but he's continuing to pluck many of the chest and back feathers as they emerge. In January his ring started coming in and by the time I met him his ring was obvious and they said he'd just gotten the bar by his eyes. Maybe he's older than they were told, maybe not; I'll never know

He seems to be settling in as I expected - very wary of activity around him, checking everything out in his cage, and jumpy at noises he hasn't heard before. I'm talking to him lots, basically narrating everything every moment and letting him know where the dog is when she starts walking around the other room. His chosen sleeping spot last night was the opposite corner from his favorite spot in his rescue cage so I already need to rearrange/add a perch or few to give him better access all the way across.

The rescue reassured me I could change his name, since they'd just named him and he doesn't know it - but he does, because I've babbled away at him when I've visited (much to his annoyance, hehe) and I can see the slightest change in his eyes when I say "Hi Cotton" across the room 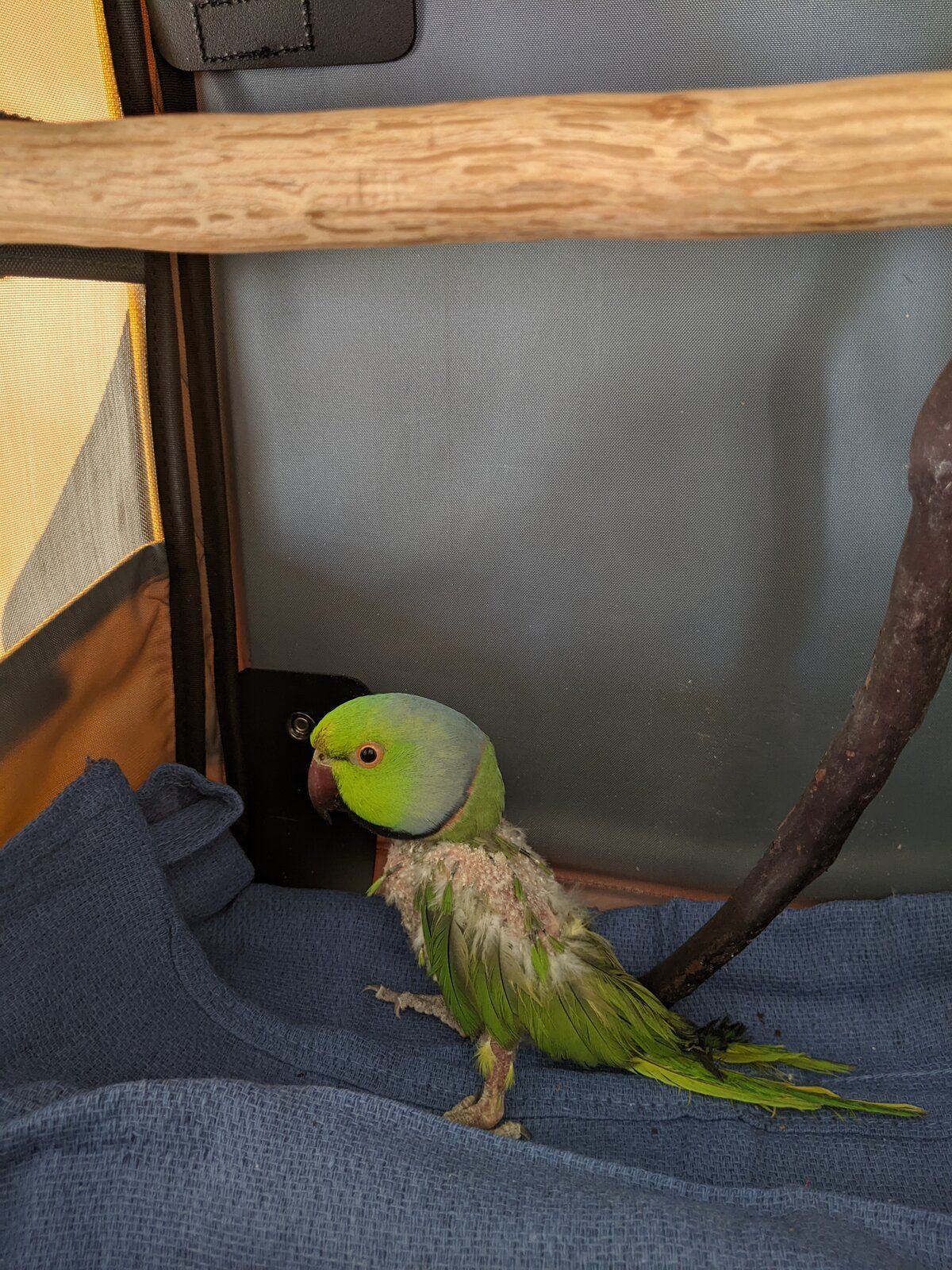 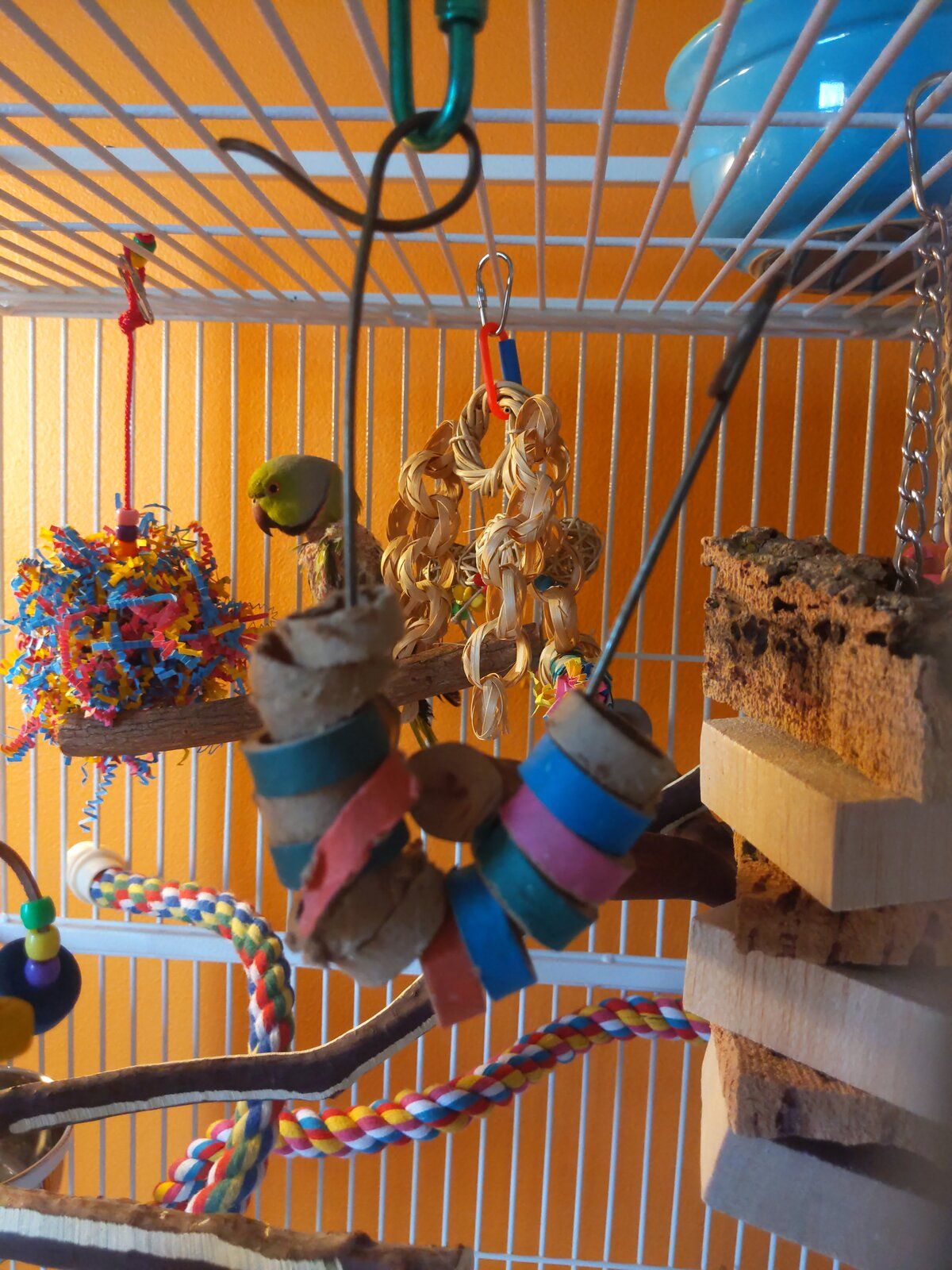 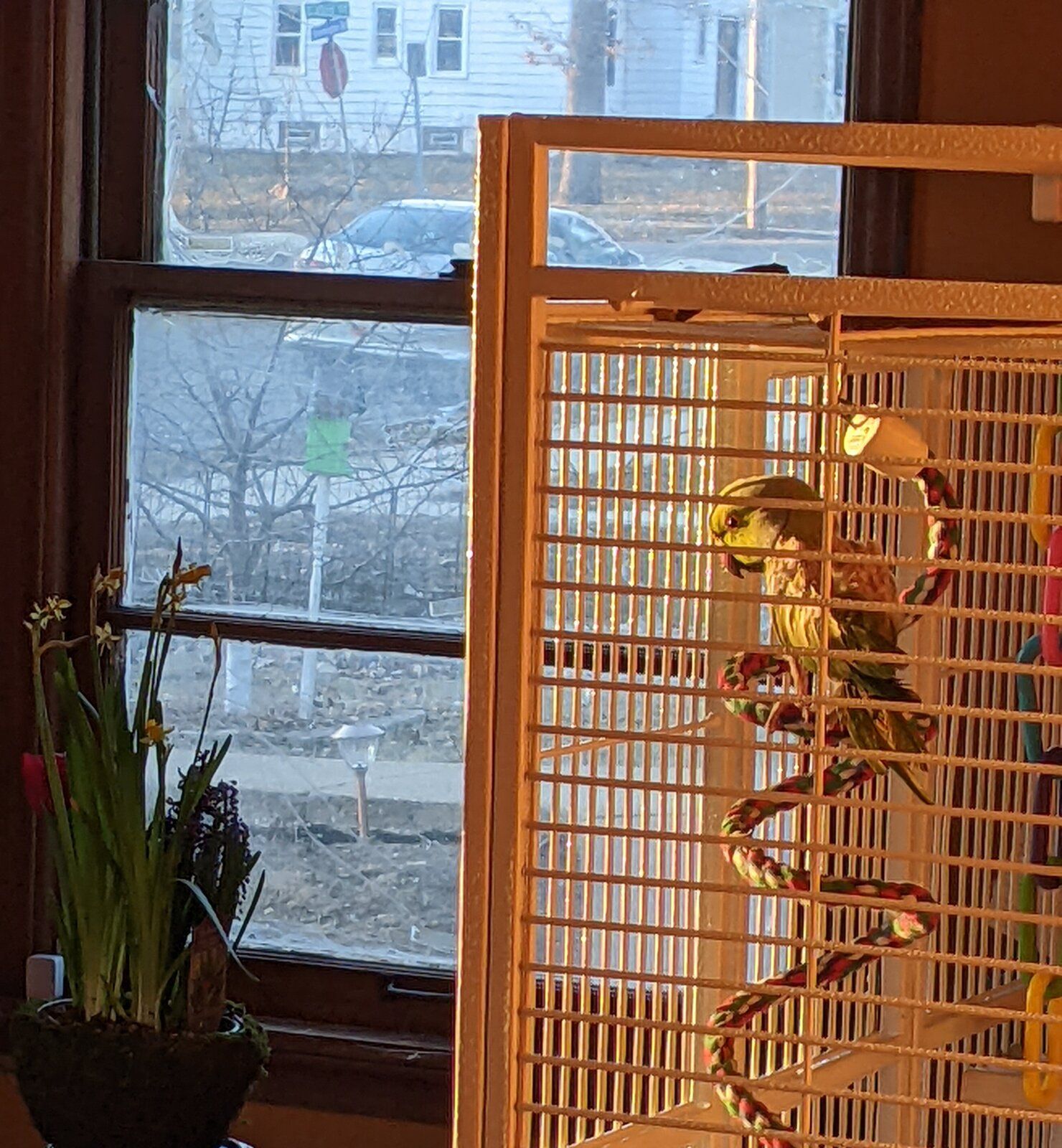 I make a solid middle class American salary as a solid middle age American but also live by myself in the middle of the city - and some things that are the cost of living in the US are more spendy than others coughcoughchronicissuehealthcarecough, so I budget carefully. The biggest factor in my being able to splash out a very nice amount of money to attempt to set Cotton up to flourish is having budgeted for my most recent pets, my cat Oliver and my dog Buster, who passed late last year.

Buster came to me in a strange turn of events 17 years ago. He was a 4 year old Miniature Pinscher with no social skills, lots of phobias, a chronic self-mutilation problem, and had learned that biting and shrieking was the only way to avoid scary things. His former owner loved him a LOT but sometimes that isn't enough. I worked as a vet tech at the time and agreed to take Buster in after many many discussions with my boss and coworkers who all agreed to help and allowed me to bring Buster to work. One of my coworkers had a degree in behavior and was on the path to a doctorate; she was crucial to my and Buster's success. It took several years for Buster to gain enough confidence to be trustworthy in public, and the hard work and occasional tears wondering if I'd made a huge mistake paid off hugely as he was the best buddy I could have ever asked for.

When I first agreed to take Buster, my son wrote an essay for his first grade class about how sharing your life with a pet means it's for life, and noted that when he graduated high school our two cats would be in their 20s and Buster would be 16. I remember thinking Oh No high school is going to be a lesson in loss! As it turns out, the two cats and a third lived into their 20s, and Buster apparently just thought that was the rule so he wasn't showing his age at all in 2016 when my son moved on to college.

Oliver came into our lives as a hospice buddy for one of my former cats who was blind and really needed a cat buddy after the others passed. Oliver adored my son and hated me, then adored my son's girlfriend's friend (both of them lived with me for a while) and hated me, then finally begrudgingly liked me once it was just us in 2019.

Both Buster and Ollie developed chronic health issues that required frequent veterinary intervention and prescription foods, and thrived for longer than any of us expected.

The $$ I budgeted to keep them comfortable over the past two years I just kept putting aside after they were gone. It had been almost 40 years since I'd lived without a cat and I always assumed I'd get a kitten right away once my elderly cats were gone, but no kitties spoke to me. Some were super cute, kittens and adults and cats with medical conditions, but I just didn't feel a pull. In January shortly after Buster passed, my son's girlfriend suggested I might like having a bird, after I was exclaiming how much fun petsitting their cockatiel was now that he trusts me. I like to learn and research but rarely jump in, and went to the parrot rescue just to start learning about different birds. Cotton had other ideas.

Sometimes I wonder if Buster had a paw in this, because I've had almost the same timeline of questions about my ability to be the right home with Cotton as I did with Buster, but even more eerie I learned that Cotton's surrender date was within a day of Buster's dying.

The first time I ever petsat Buster (long before I took ownership) I joked with my friend that if I had a dog like him I'd never need a human partner. Little did I know that would be the outcome, 17 years later.....

It wouldn't surprise me one bit if he made sure Cotton and I found each other.

What an incredible journey, and how it tugged on my spirit.

Buster and Oliver were amazing souls, as are you my friend for your rehabilitation and trained support, nursing and love.

Very much agree with you that your past loves spirits guided you to Cotton.

Also your sons girlfriend sounds amazing and I hope he puts a ring on her finger.

I wish I could fast forward you to the love/trust /bond with Cotton. But only partially, because its the journey, the things we need to learn or grow or appreciate, all the little success joys along the way that make that love so deep and complex and rich.

You've connected with so many if us here, we are drawn in to yours and Cotton journey. Cotton there is something about him , something Xtra special about him, that touches me and I know I'm not alone in that!

When you showed that picture of him fearfully watching......thst was it for me I would have driven to Montana to get him, if you weren't and I don't say that lightly ( health,car, financial)
But then you shared the picture of him looking at you!! OMG then I knew I didn't have to worry, you had found each other!!

I'm in, I want hundreds of pages of your story. The good, bad, the wonderful, the amazing, the frustrating , tge set backs, the miracle moments of connection and progress.

I just added 2 perches to his cage which scared him for obvious reason so he's currently glaring at me. From one of the new perches.

" From one of the new perches." Laughing
OP

He's just spent 5 minutes preening and rubbing his beak all along the perch, and is now fluffy and slow-blinking while watching me.

I knew he wanted one there 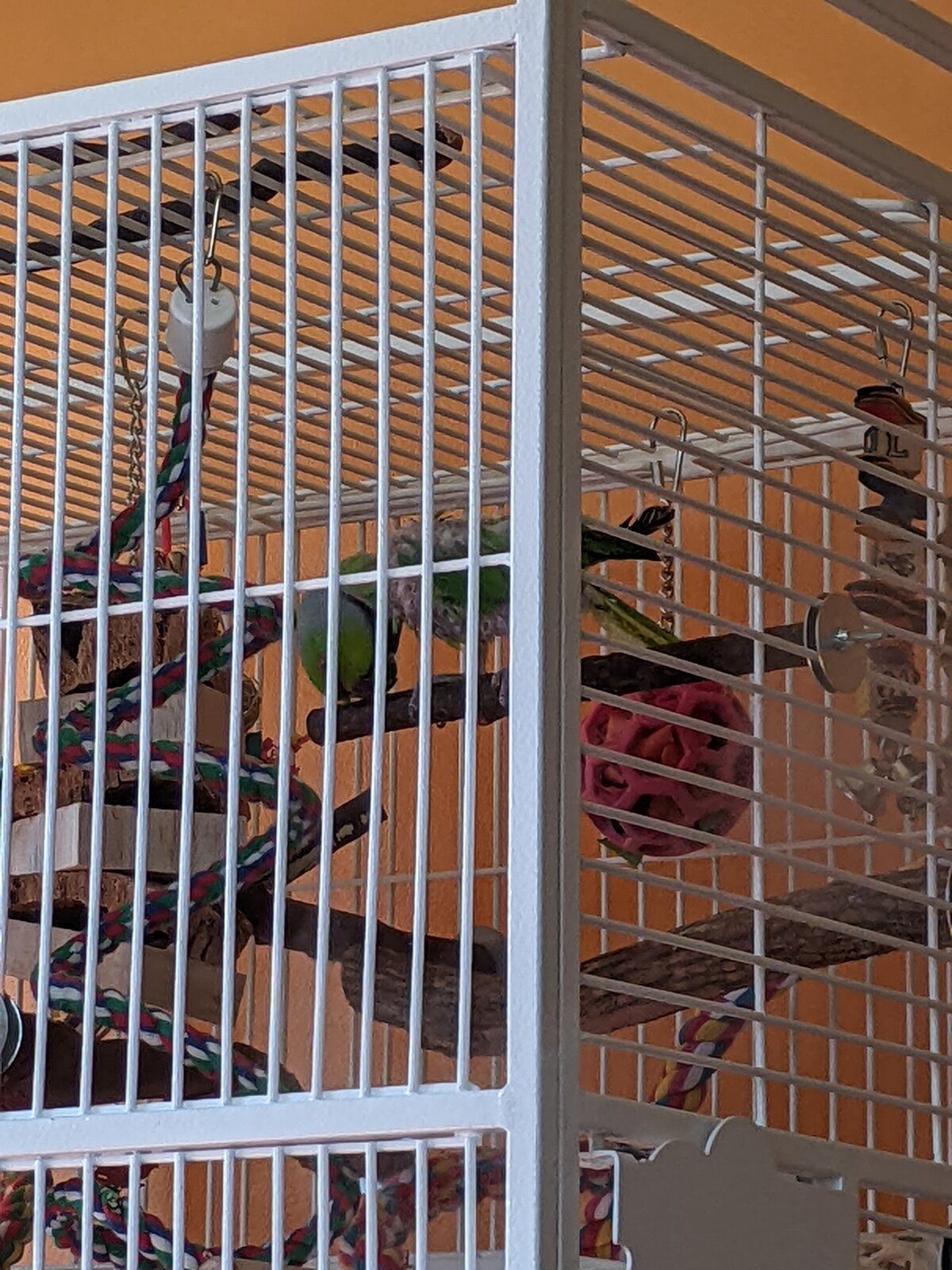 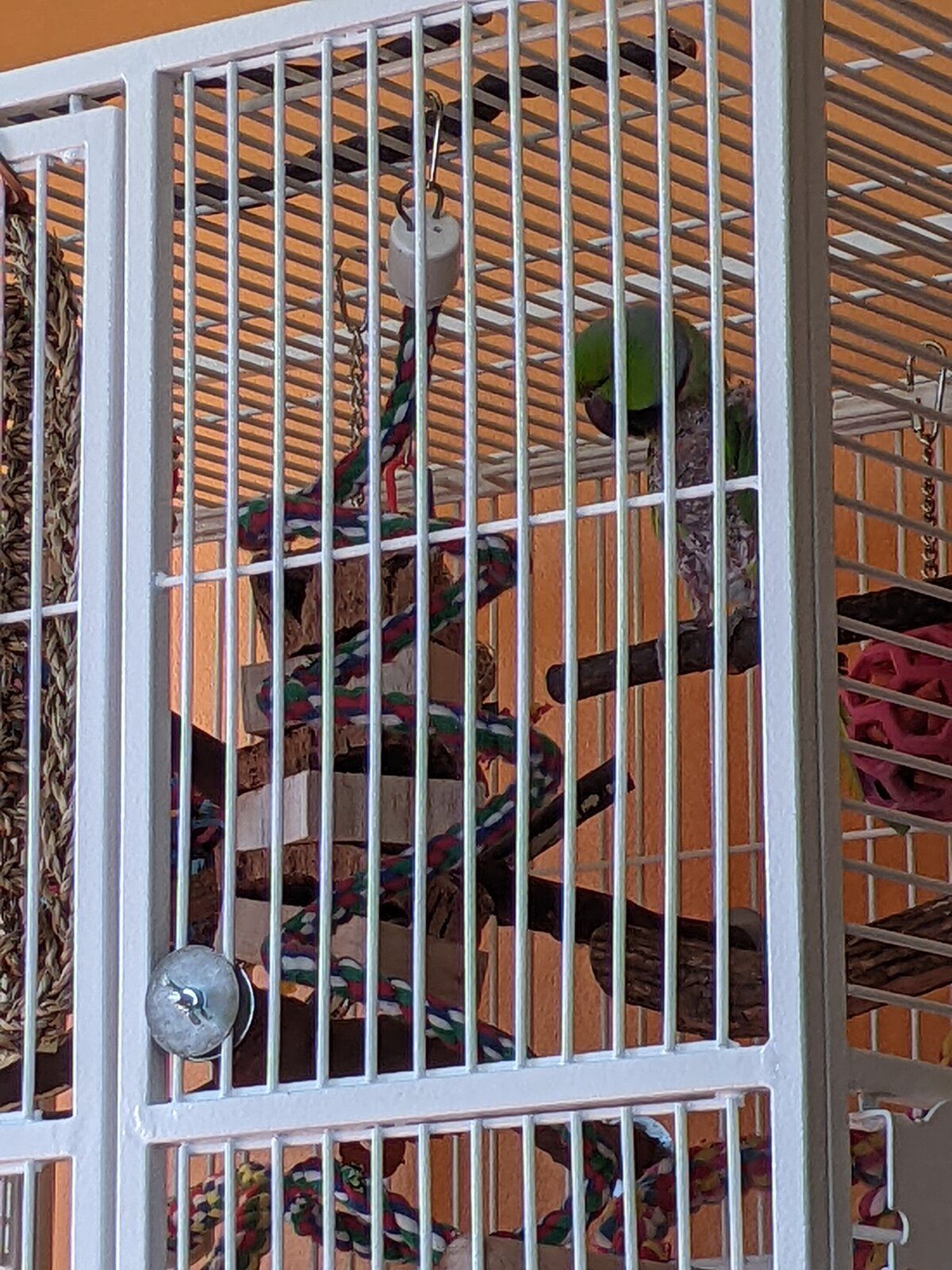 I got chills when reading that Cotton was surrendered the day after you lost your sweet Buster. I do believe that Buster had a paw in you meeting Cotton. What a precious thing he did because somehow he knew that you and Cotton could heal each other.

I agree with everything Laura said, I am also so invested in Cotton and your journey with him. What a beautiful journey that is going to be!

Congratulations Cottonoid on your adoption of gorgeous Cotton, and thank you for giving him what I know will be the most loving home he ever could have wished for! This truly seems to have been a match made in Heaven, and I look forward to sharing in your journey with him too

You have a new bird. I have a new hero. YOU.
What a happy, happy, HAPPY. thing.

I am hooked. More Cotton stories as he unfolds right before your eyes!

Just amazing- see, animals have a way of interacting in our lives wayyyy more than we can imagine! Good job Buster for bringing Cotton to your mama! And I too, can’t wait to hear more of the journey you two have together! Just melts my heart!
OP 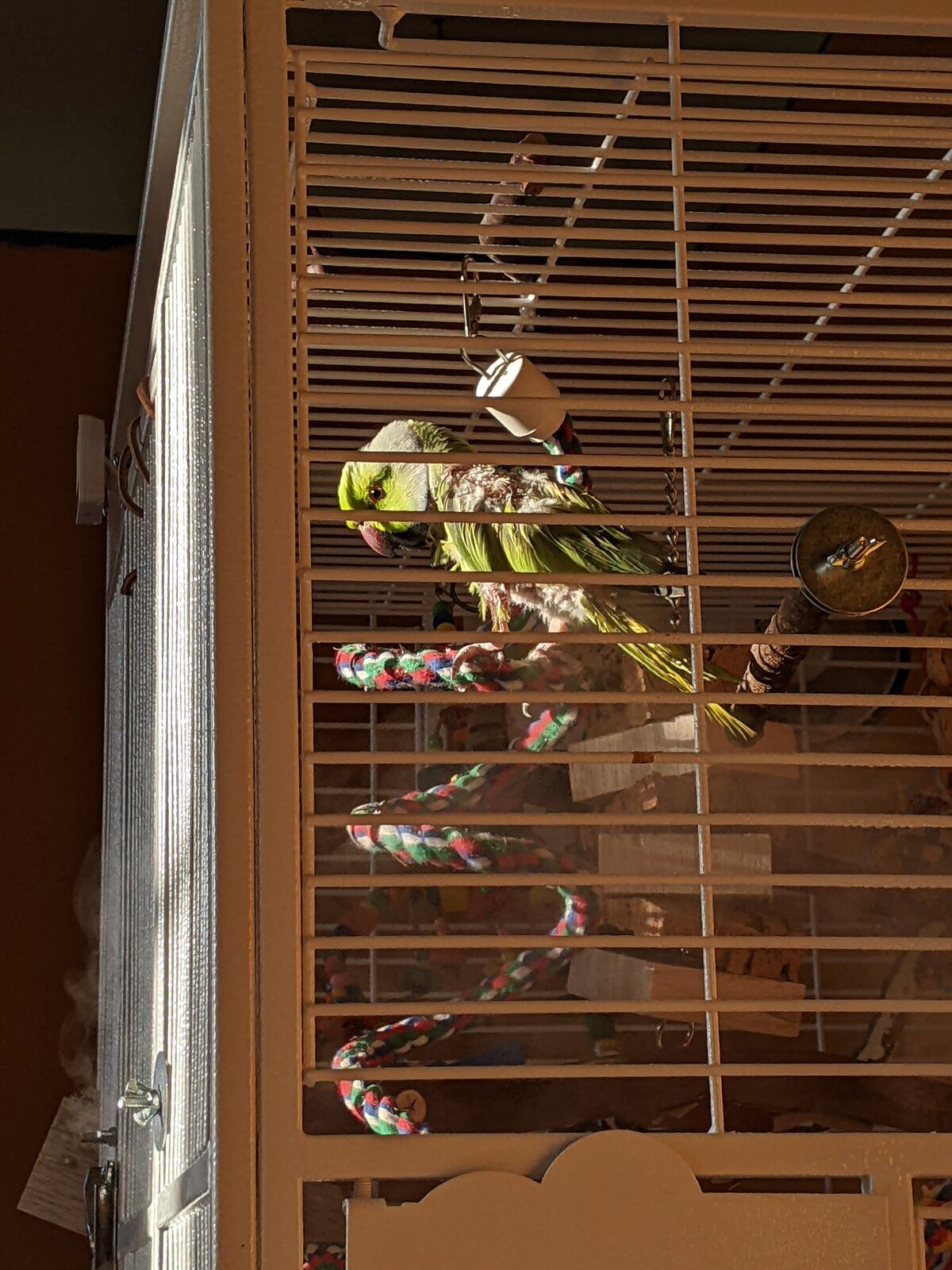 Handsome boy in the morning sunshine!

Looking forward to this time next year when Cotton become fully comfortable with you and your home.
Work at Cotton's rate and allow comfort enter his World!!
OP

One of the first rescue visits where he was obviously calm around me but didn't like other people too close:


Moved him to a bigger cage a couple weeks ago:


HOME (chilling in the carrier while I gave him fresh water and food after the hour car ride):


Sleepy boy while dog and I laid on the couch:

Happy boy after I made a big show of how yummy strawberries and peppers and blueberries are and he wandered down to the bowl, chucked the pieces on the floor, and took the walnut piece back to his perch


Somebody discovered a new toy this morning! 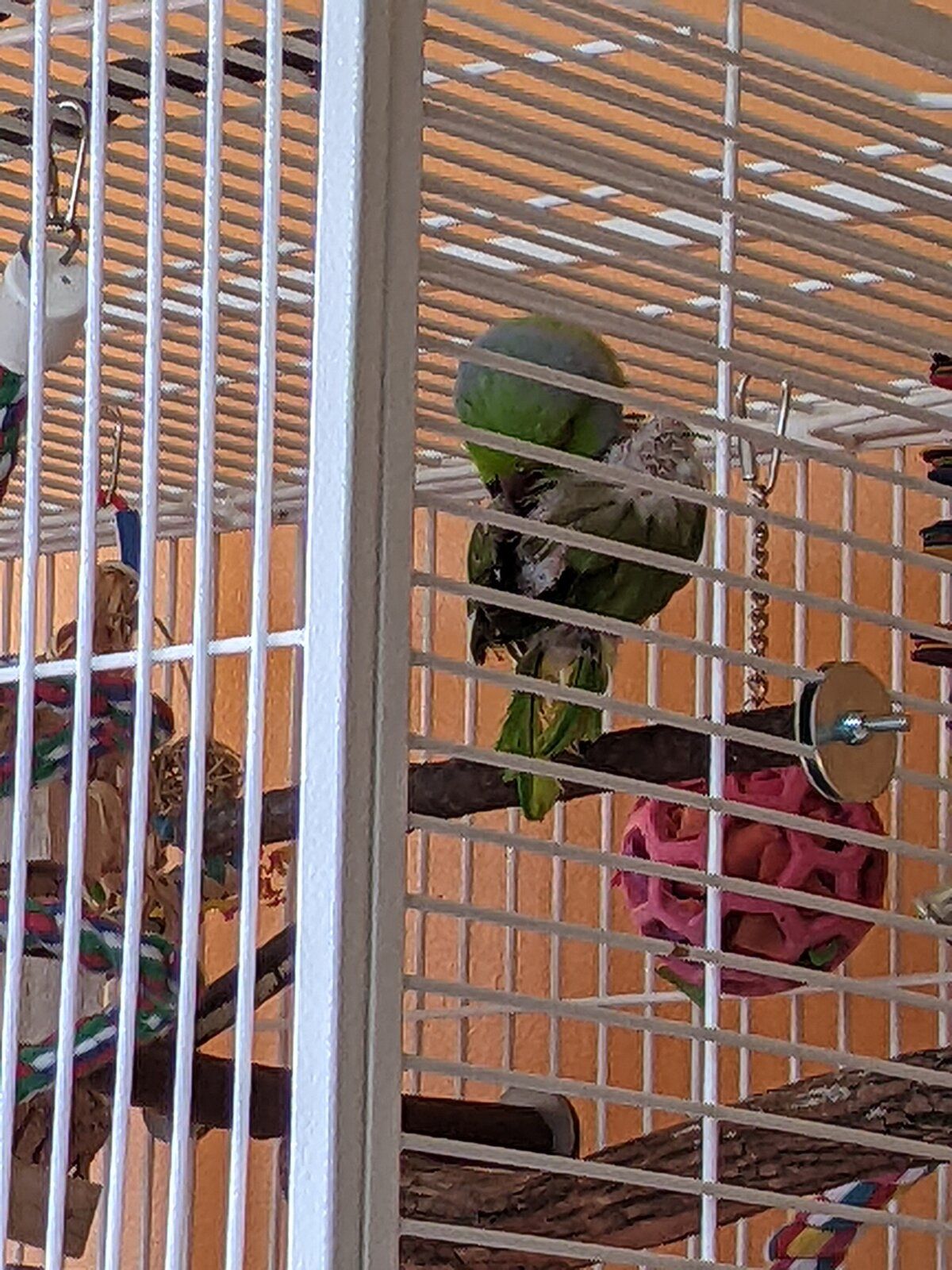 Wow! What a difference being home with you!!! So much more relaxed!!@
What a relief for him, to not have to be on high alert all the time!

He us really settling in fast
OP

I'm gobsmacked how relaxed he's been overall!
You must log in or register to reply here.

The updating thread of my Budgies

What to do when there is blood?
2

Thursday at 7:31 AM
SailBoat