What to do when there is blood?

I came in from walking the dog and Cotton has bloodied himself somewhere near his elbow. It's already congealed and mostly dry. There are a few spots on the floor under perches, so it looks self inflicted rather than a scrape.

I can't tell whether it's a feather (my assumption) or skin. He currently has a wing feather on the underside in that spot that sprouted this week, and many wong pins as well as body pins. This is the first real feather growth he's had in two months.

Things I know about Cotton from his time at the rescue to now:
* Every time he's been handled he removes ALL his feathers, and after a vet visit this included pulling out all wing and tail feathers, including two blood feathers (but they didn't bleed this much).
* The few times I've misted him (from above on a very fine spray bottle setting) he's removed all his downy feathers - he does NOT enjoy it but it did help his irritated skin noticeably. He hasn't been misted since getting his current pin feathers (including wings)
* He is still symptomatic and being treated for a presumed Chlamydia infection
* He is terrified of being touched or handled - we are working on this several times a day in short sessions

Do you think it's ok to leave the injury be? I just checked on him again to try to take a photo and it's dried completely now. I haven't seen him stretch or flap his wings yet to see if the scab will reopen or not.

Anything I'm not thinking of supportive care-wise? The room is 45% humidity today and one side of his cage is 83-85F where the sweeter heater is. He's been eating pellet/seed/pepper/parsley today. I just offered him a spray of millet and he's busy back and forth between eating some of it and looking at birds outside. 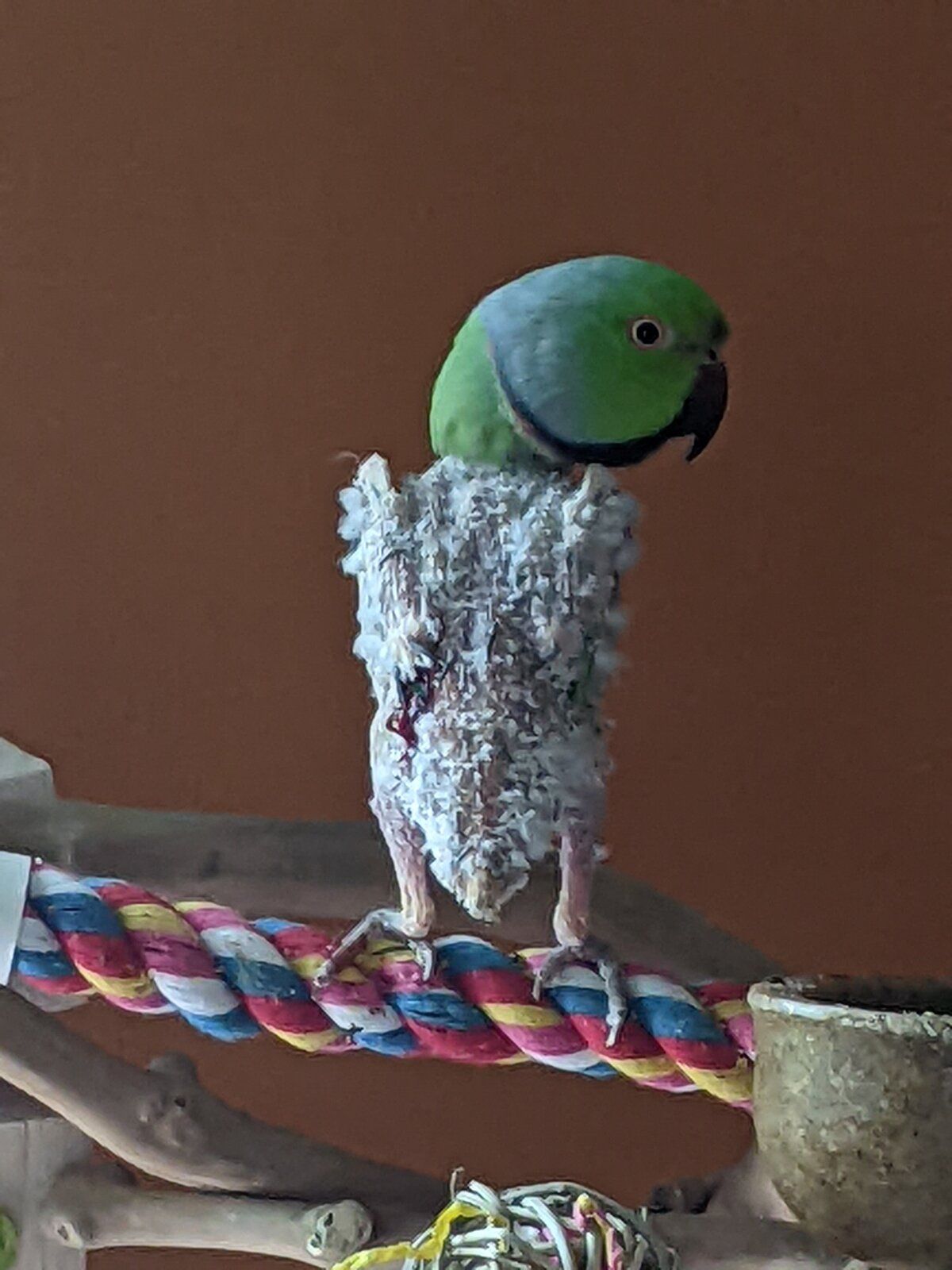 It's safe and works
OP

clark_conure said:
It's safe and works
Click to expand...

I have some (and chickpea flour that works just as well when someone accidentally quicken their Great Dane's nail while housesitting and can't find the Qwik Stop lol) but thankfully he doesn't appear to be actively bleeding.

I think what I'm wondering is that given he will almost certainly chew/pluck  more if I need to handle him, is there something worse that could happen if I leave it alone? Like infection if it were a skin wound.

And of course just writing it out to calm my nerves

IODINE is also safe for them, it should actually be part of their diet (in moderation)

It would also held stave off any infection.

Google is iodine safe for birds.....and get some denatured (clear) iodine to keep injuries clean.
OP

Oh that's a good idea. I only have betadine on hand. Thank you.

I'm so sorry that this has happened with Cotton. Luna, my IRN, did this a few times and it was always a feather she had pulled out. The blood was usually dry, but there were a few times she was still bleeding a bit.
We took her out and washed it, and put a little Betadine mixed with water on it. There were a couple of times that the betadine made her chew in that spot worse, I'm not sure why, but when she did our vet said to just make sure we kept it clean until it healed and that always worked for her.
We always use cornstarch to staunch bleeding as the Quik stop sometimes causes them pain.
Sending prayers to you and Cotton, and I know that Cotton could not be in more loving and capable hands.
OP

After just checking on him again (my phone where I'm typing is charging in another room), his side where the blood had pooled is free of blood now

....I think his poop will look dark later.... There's no obvious wound so it likely is from pulling a new feather/pin from the underside of his wing.

all the cool cats use:

So I should also leave the variety of suture and instruments out, too, then

That's a very good idea though, to make a kit separate from my current mammal-heavy one.
OP

clark_conure said:
all the cool cats use:

Have you used it on your birds before? Doesn't the alcohol sting? I know on my own cuts I prefer povidone iodine for that reason lol but I'm a wimp!

Its Iodine not alcohol! NO sting at all! Iodine is painless!
OP

clark_conure said:
Its Iodine not alcohol! NO sting at all! Iodine is painless!
Click to expand...

Ohhhhhh one of the photos in the Amazon link must be of a different product! I saw 48% alcohol and thought

Nope it's safe and if they lick it no problem. I mean don't put it in their water bowl but its fine.

Also....I recommend "that" bird first aid kit with those items....I have a first aid kit for me and one for them, but then again I was in the coast guard so maybe I just think that way.
OP

I've built up my current first aid kit pretty well over the years between working in vet tech, human surgery, and protest aid, but am definitely remiss in making designated space for Cotton supplies!

I even have a list written down from a post that I think Sailboat made, maybe from the I Love Amazons thread? so I've had it for a while

The danger of blood feathers is they can act like a hose and keep bleeding.

Those that do you need to pull with hemostates.

I'm a huge fan of dilute betadine fir cleaning, to leave painted on wounds, and to use as a warm compress.

These are big feathers, they are going to be uncomfortable coming in.

I would consult with avian veterinarian to see if melixicam(sp?) Might be helpful. I might consider halipardol, or veterinarian approved collar. Because if you can get him through these coming in. Its very likely he would let them stay .

With my mutilated and plucking rescue, tge mood altering medicine let all his primary and tail featgers grow in, plus most of his back and leg feathers. Then he never plucked those . Even after coming off the medicine, at least as long as I had him till he went on to his next home. We did not use a collar with him.

This looks like one of the best ones I've seen. Type into Amazon

Laurasea said:
The danger of blood feathers is they can act like a hose and keep bleeding.
Click to expand...

This is what I thought when I walked in and saw the blood :/

I managed to get a better look while target training for walnut pieces. I don't see any residual blood or broken feather under his wing but I wasn't physically holding him. I'm going to try swabbing it with betadine on our next round of training - he'll let me get close to him through the cage bars.

The only reason he's not on Meloxicam already is needing to give orally twice daily (or injection). We were hoping we could get him through the first round of feather breakthrough without interventions that cause even more distress but maybe Cotton's not so keen on the conservative route.

because he hasn't allowed the lesser feathers to stay ...( or only random ones briefly) ....
Sadly I think he will continue to go after the primary flight feathers.

I can understand your rational, fears, and hopes. How very stressful to try and come up with the best approach. You are in the position to decide whats best. Plus your guidance from vet.

I lean towards intervention.
You must log in or register to reply here.

HELP 🚨 BIRD PLUCKED SOMETHING OUT

PLEASE HELP! did my bird break a blood feather??