New life has sprung! Congratulations, hope the others hatch well and thrive!!
OP

Now there are two!

I suspect baby number 2 may have appeared sometime yesterday afternoon. However in the moment that mama allowed me to check, i only saw Number One. I think number 2 may have been kinda lying against/under One at that point, thus being invisible.

However, I'm not at all sure about this. It's possible number 2 did not come out of its shell until sometime in the night. I definitely heard two babies peeping in the wee hours this am. 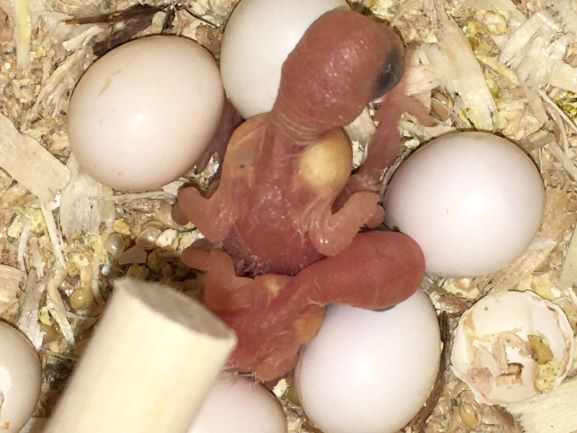 I think both are not albinos judging by their dark color of their eyes.

Thanks for the update!
OP

Well really hard to tell from this photo, but there are 3 babies as of today!

They moved around, slightly separated for a moment, so I really did see all three. But by the time I clicked the photo they were back together all in one pile again. 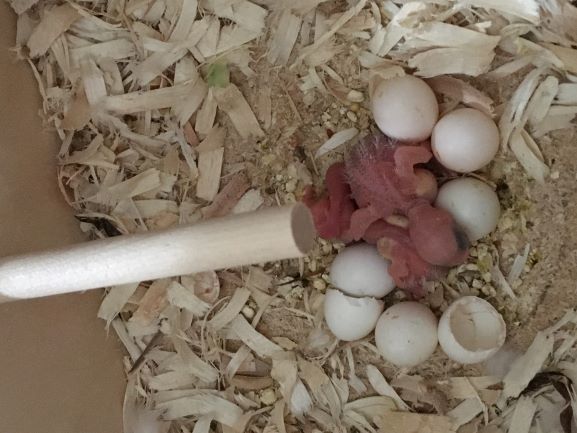 The picture is quite good! I can see all three easily, thanks!!

They are developing really well, it is a pleasure to follow this topic! It brings me so many memories!

Mama has been leaving the nest quite a bit more today. She delegates babysitting responsibilities to Number One aka Riker while she is away.

A PILE OF THREE BABIES: 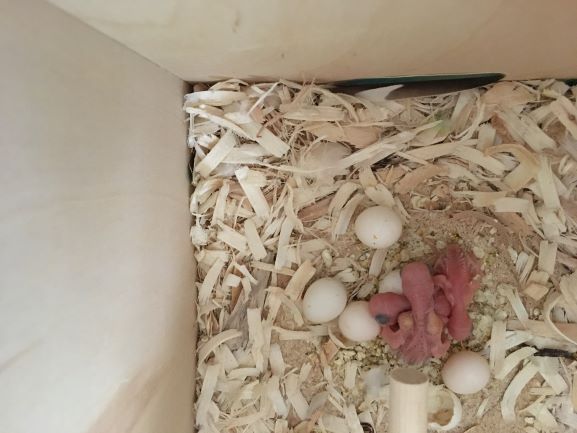 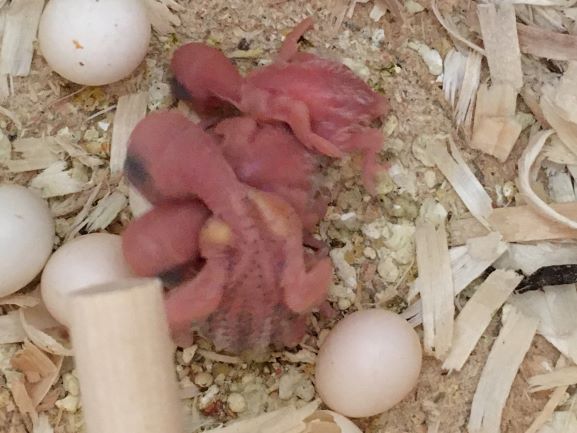 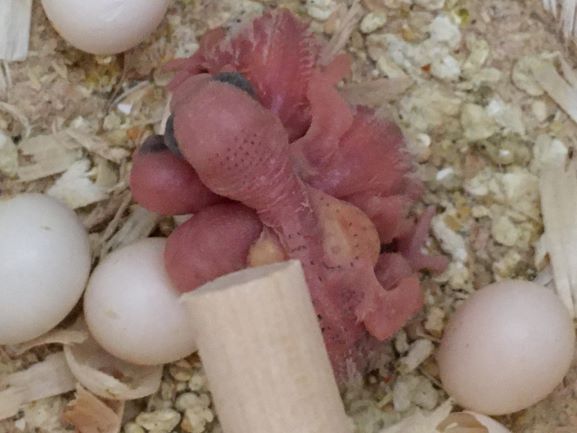 Kitekeeper said:
The picture is quite good! I can see all three easily, thanks!!

They are developing really well, it is a pleasure to follow this topic! It brings me so many memories!

Thank you for the encouragement to keep posting more baby pics!

Amazing progress, so happy to see this journal explode with life!

They are really beautiful!! Riker is already showing signs of the first feathers under the skin!

Number three also has dark eyes, so far no lutinos or albinos!

BTW, is Jefferson well? Is he still separated?
OP

Kitekeeper said:
They are really beautiful!! Riker is already showing signs of the first feathers under the skin!

Number three also has dark eyes, so far no lutinos or albinos!

BTW, is Jefferson well? Is he still separated?
Click to expand...

Jefferson seems to be okay. I applied the cream to his leg for less than a week. He was more and more upset by it each night. I kept him separated somewhat longer. Well actually I only kept him Fully separated a few days, after that it was Separated when I was sleeping or away. Both he and Calliope were quite upset by the separation.

He had been seeming a bit dejected though. I was a bit concerned and then I realized, I had stopped playing the budgie-vids on youtube-tv that he loves. So by now I think those video budgies are his friends also. I went back to playing them, and he went back to acting like himself... and... a few momentary budgie-budgie squabbles occurred again. (No violence tho!!) Again today, I stopped them completely. He is looking subdued again, and I've Not heard squabbles today.

Monday I will try playing only the budgie-video that shows two budgies happily sitting around chirping at each other. Not the ones with larger budgie flocks with interactional variety. Definitely NOT the one he loves the most, of an amazing giant budgie aviary in a zoo somewhere. If I see any escalated behaviors with that, then he will lose his tv-budgie-friends until the babies are grown.
OP

Today there are four.

Riker is in command whenever Mama takes shore leave.

When I first got Jefferson and Calliope I was blown away by their different personalities. Such tiny creatures to have So Much Personality! At this point, I am thinking a lot of it must be down to birth order. They way Mr. Jefferson takes responsibility for everything and everyone? The world on his shoulders? I bet he must've been a Number One also. Responsible for all the other babies when Mama is away. And my Sunny sun conure, with not a care in the world as long as Her needs & desires are met? I'm thinking she must've been some where lower in her clutch. Fully trusting to get fully fed; never lacking for warmth to cover her back; and, no need to worry about the others, fully secure. Calliope - a bit more aloof, happy to follow Jefferson's lead but then drive him away to take what she wants? I bet she was a 2 or 3 in her original clutch.

Well who knows. Just me theorizing for now.

Anyways there are Four now. Number One is still the assigned babysitter. 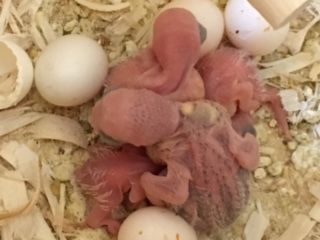 Calliope is making a new noise when she out of the nest. She sounds like metal squeaking against metal. I was worried that perhaps she had lost her voice... and still, maybe she has somehow... but I think I've heard her making normal noises as well. But at this point she is making the metal-sounding squeak more than her usual sounds.

I should say I think it's her. I've been trying to sneak in when i hear it, and I think it seems to come from her, but it's hard to be certain because whoever it is, actually Stops as soon as I'm visible. (It's not Sunny though, since she's on my shoulder right now, while someone - who I assume is Calliope - is making the loud squeaking from the other room.)

I loved the theory about personalities and the order of birth

Now you might need to keep a sharp eye as the number four might have trouble to get food.
OP

I loved the theory about personalities and the order of birth

So there were Eight eggs. Seems One thru Four hatched right on schedule. However there are no new babies since then, and I can see 4 un-hatched eggs in the box. Number Four was last Saturday. This makes me feel, I should wait until Monday before removing the Un-Hatched eggs. I suspect (hope!) that four will be ALL the babies. BUT i don't want to think I might've discarded a baby who was just waiting its turn to exit its shell...

Here's how they're looking today: 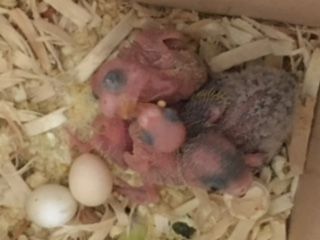 The crops were mostly empty at the moment of this photo. However that's quite unusual. I think mama is doing a pretty good job. Usually whenever I peek in I see full crops. Also, whenever I peek in, the PileOfBabyBudgies is usually in, or moving itself to, a different location. So in other words, plenty of activity happening.

They're still so small, it's hard to believe how Quickly they're getting big! Number Four was much more visible, of course, right before I got the camera.

The way they all just want to be together as One Organism, reminds me of how, when I first brought home Calliope and Jefferson, they wanted to be touching at all times. (Then after a few weeks, they started to squabble occasionally, as they realized they could no longer both occupy the Same Spot at the Same Moment.) They were extremely young at that point, and I'm thinking it must've been leftover baby-behavior.

Good news!! Thanks for the update, I like the way you observe them and think about it.

I developed a deep taste for biology, which eventually lead me to become a biologist observing my budgies when I was a teenager

I guess you might be right regarding the remanescent of baby behavior in Jeff and Calliope when they first arrived.

You can always candle the eggs before discarding them, when the time comes...just to be sure.

Have you observed the feathers of Riker? They look yellow in the wing and are dark in the head, I guess he is going to be just like Jefferson, althought it is way too early to be sure.
OP

One of my little aliens has transformed into a miniature birdie! 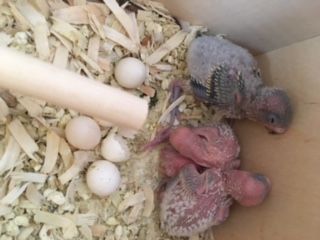 Still four babies and still four un-hatched eggs. Planning to wait till monday before discarding the eggs, & probably will candle them first.

This morning, Mama enjoying her carrot: 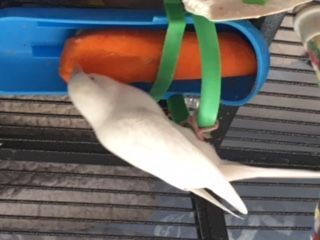 Wanted a pic of papa too. He was standing atop the broccoli to attack the lettuce. But, he saw me approaching, and resumed sentry duty instead.

Me and Sunny are off to Newburyport for an hour or so this morning, before it gets too warm.

Reality sets in and you know they are birds, not aliens when feathers sprout!

They look so cute when they are in that early feathers phase or as I call, the pijamas phase.

More feathery pajamas! And cuddles...
Too much cuteness!! 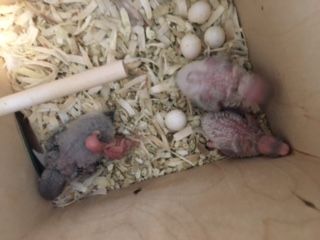 Lovely!!! Thanks for sharing!!

I am afraid number four is getting behind in the development. He is nine days old now, should be a little bigger and opening the eyes...unfortunately this is common for the last chicks.

Would you be willing to help Calliope and feed the baby with formula?
You must log in or register to reply here.

SIX budgies, a Conure, and a fiddle