It seems that Two and Three are far more active than Riker. I think this is okay. HOpefully? Mama Calliope has always been relatively calm, where Jefferson is SO full of energy. So perhaps Riker, although presumably inheriting Dad's appearance, has perhaps inherited Mom's calm demeanor? I feel a slight concern when I watch Patchouli (two) and Three booking all over the place, ready to climb out the nestbox when I open it (if they could), where Riker seems happy to just find the nearest corner and relax. BUT. Riker does respond, look around & move around. So hopefully it is just personality and not any problem.

They all seem happy and well-fed. Tiny is, well, still tiny, but getting bigger.

Here are today's pics of baby budgies, smallest to largest: 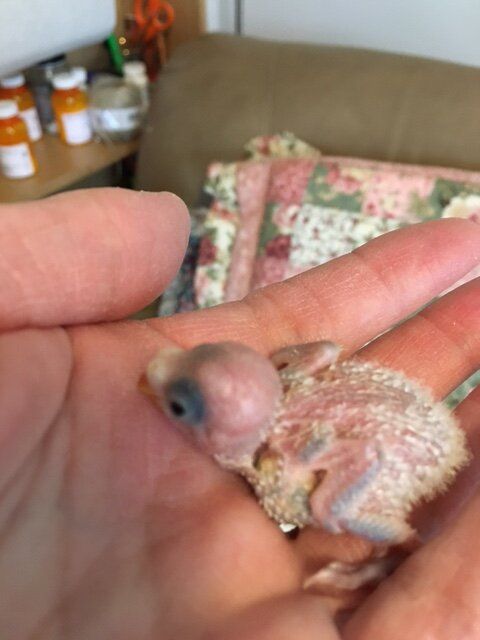 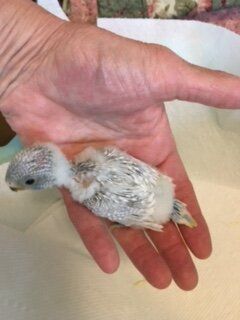 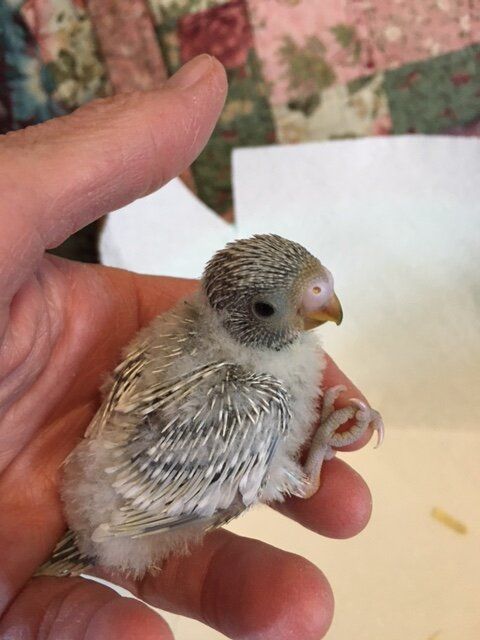 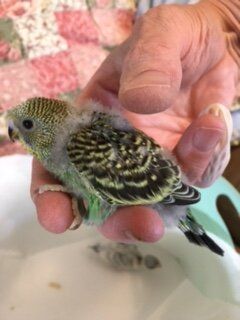 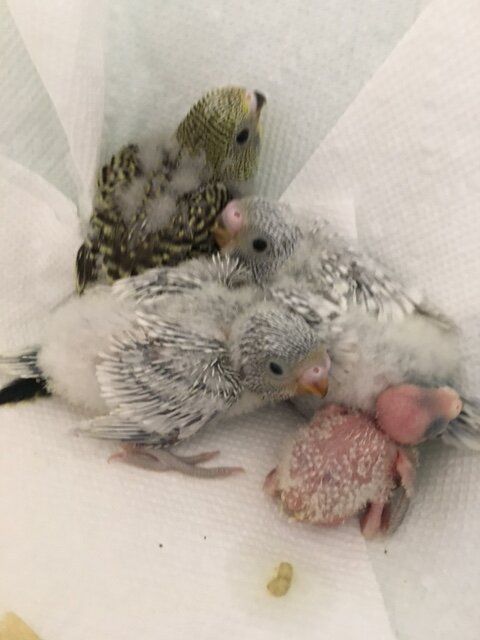 fiddlejen said:
Is it the tailfeathers?
Click to expand...

Almost! The feathers right above the tail feathers are the first color feathers Riker already has green feathers in the legs, I agree with you he will most likely be physically similar to Jefferson.

fiddlejen said:
It seems that Two and Three are far more active than Riker. I think this is okay.
Click to expand...

I do think too. It is quite normal to have their personalities expressing at this young age. Riker is probably a shy budgie and will rely on discretion even when adult.

Patchouli and three will possibly be the ones that will show interest in people and new stuff in the cage. Both are definitely from the blue series.

Tiny development is just amazing!! He is catching up quite well. He looks alert and is developing wing feathers and pajamas! I am really proud of you Jen, you are doing a terrific job! I think, Tiny is also from the blue series.

Thank you for the excellent pictures!! I loved to see them one by one and all together,
OP

Here is Tiny's close-up for today: 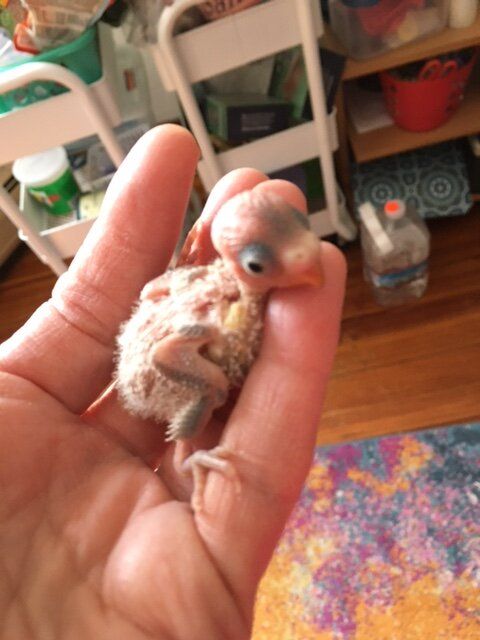 Thanks for the pic!! By now I am already a huge fan of Tiny!

He is going to have a strong bond with you. Just keep feeding him even if not much needed, just to keep him used to you and your care.

Awesome as, everything is running pretty smoothly and the little tackers are growing well!
OP 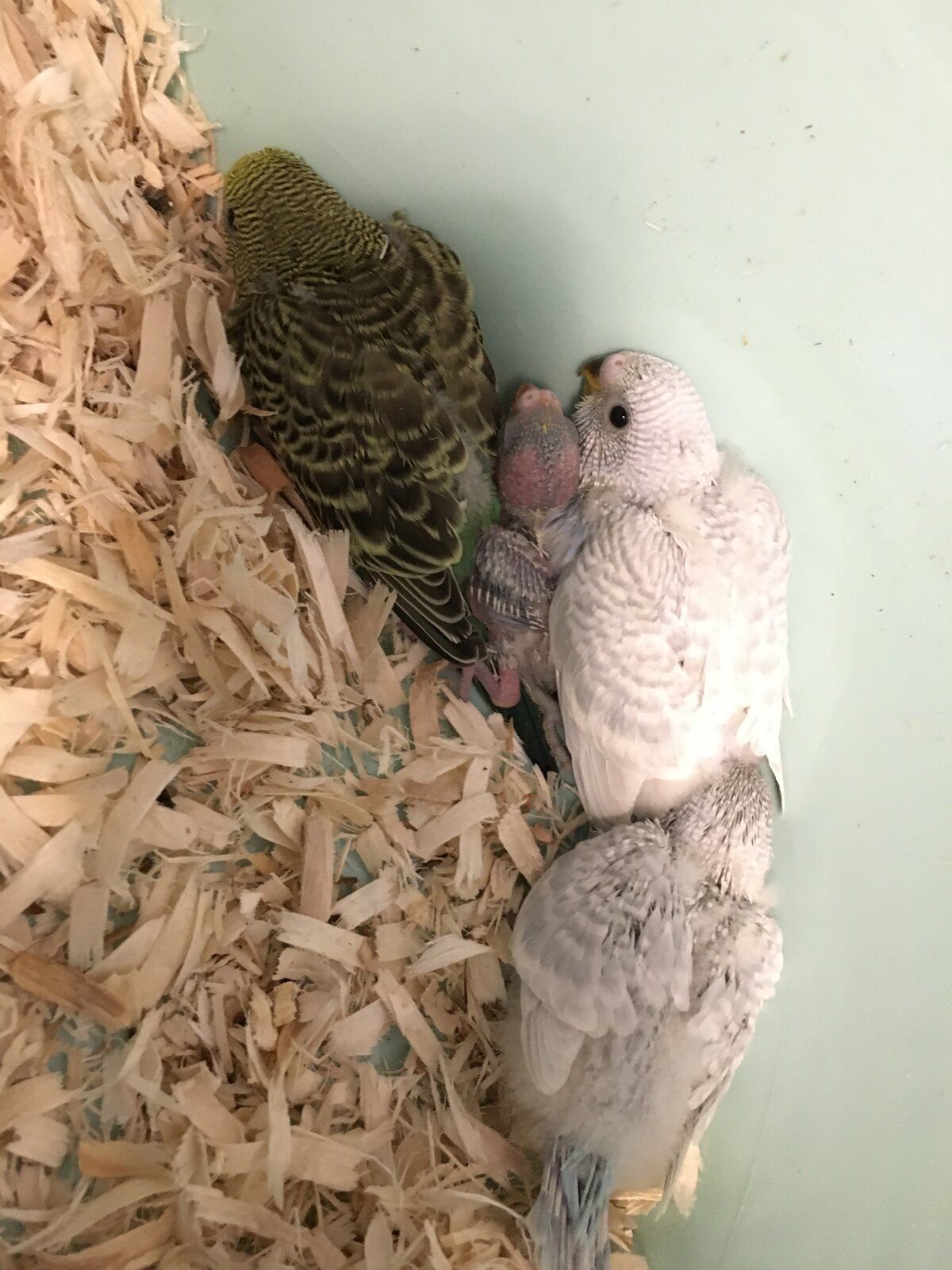 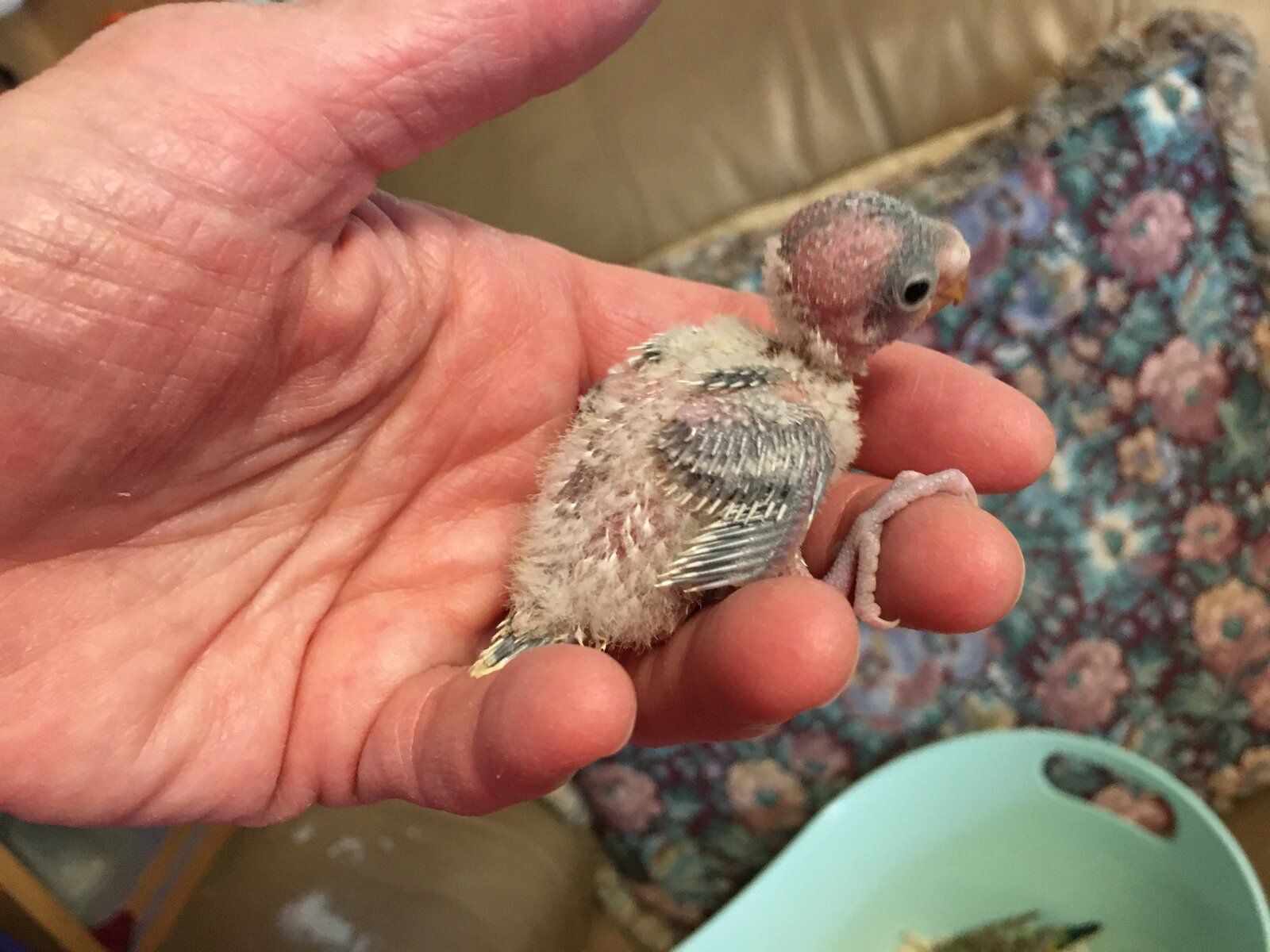 They're getting so big! And look at Tiny! OMG he looks so happy (and fluffy ) You're doing an amazing job with them. Keep doing what you're doing!

Patchouli and three are beautiful "greywing" mutations! They add to your budgie family the lighter wing marks (that are so gracious) and the blue color of their bellies!

Tiny is just your miracle! He is alive because of your dilligence and dedication. Saving him was not at all an easy task, congratulations!

Do you still have to feed him or Calliope care have been enough?
OP

I actually only fed Tiny for three days. No wait, i think I added in one more feeding on a separate day. After that, I kept checking but mama kept his crop filled much better than anything I could manage. I DID keep making sure he was on top of the pile. I think whatever that extra feeding was, I had found him lost underneath again. Up until two days ago, I was checking every few hours during the day to make sure he was on top.

I took note of your suggestion that I maybe keep up with hand feeding, but it seems such a struggle that it's a risk. It was worth it when he was clearly at-risk anyway, but as Tiny is getting so much better, getting food from mama and growing, I don't want to continue to take an unnecessary risk.

Tiny is definitely more comfortable with me than the others. I am trying to make sure & handle them individually a little every day, with hopes of getting them all used to handling, but Tiny is clearly happiest with this.

I really like the way you respect your birds!

Your perception of how to help was the perfect measure to help Tiny and not risk his life. It takes a lot of commitment to check the nestbox the whole day to put him in the top of the pile.

You can be sure Tiny knows what you did (not to mention the feeding itself) and feel more close to you for saving his life. These birds are much more perceptive and sensitive than we could imagine. I am not just saying that, I recently explored scientific papers with my students that studied budgies social behaviour.

Some baby birds that are used to human contact may express some sort of regressive shy behaviour soon after they leave the nest. Sometimes it is something that happens suddenly. For that reason I encourage you to keep handling Tiny, even if it is just to make him feel your heartbeat and your energy. In this way he might not get too shy after leaving the nest.
OP

Patchouli is true-blue, and Three is blue-green.

I’m actually not 100% certain about this identification. Kinda lost track over weekend, and now they’re same size. I’ve gone back over pics examining tail feathers, and Patchouli true blue is my best guess. So that’s what I’m going with & that’s who they are now. (Three will probably develop a non-numerical name shortly, now that colors are visible.) 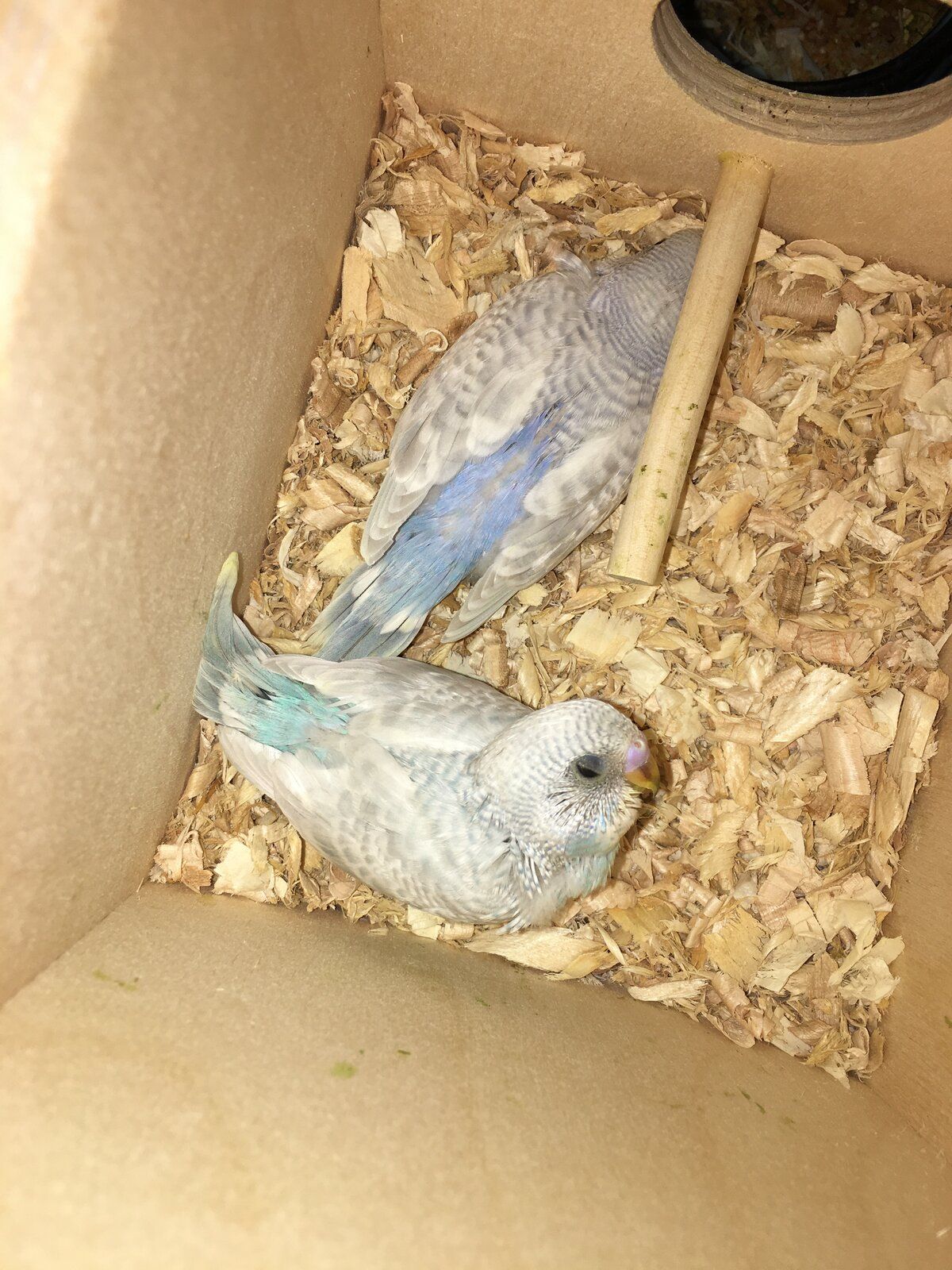 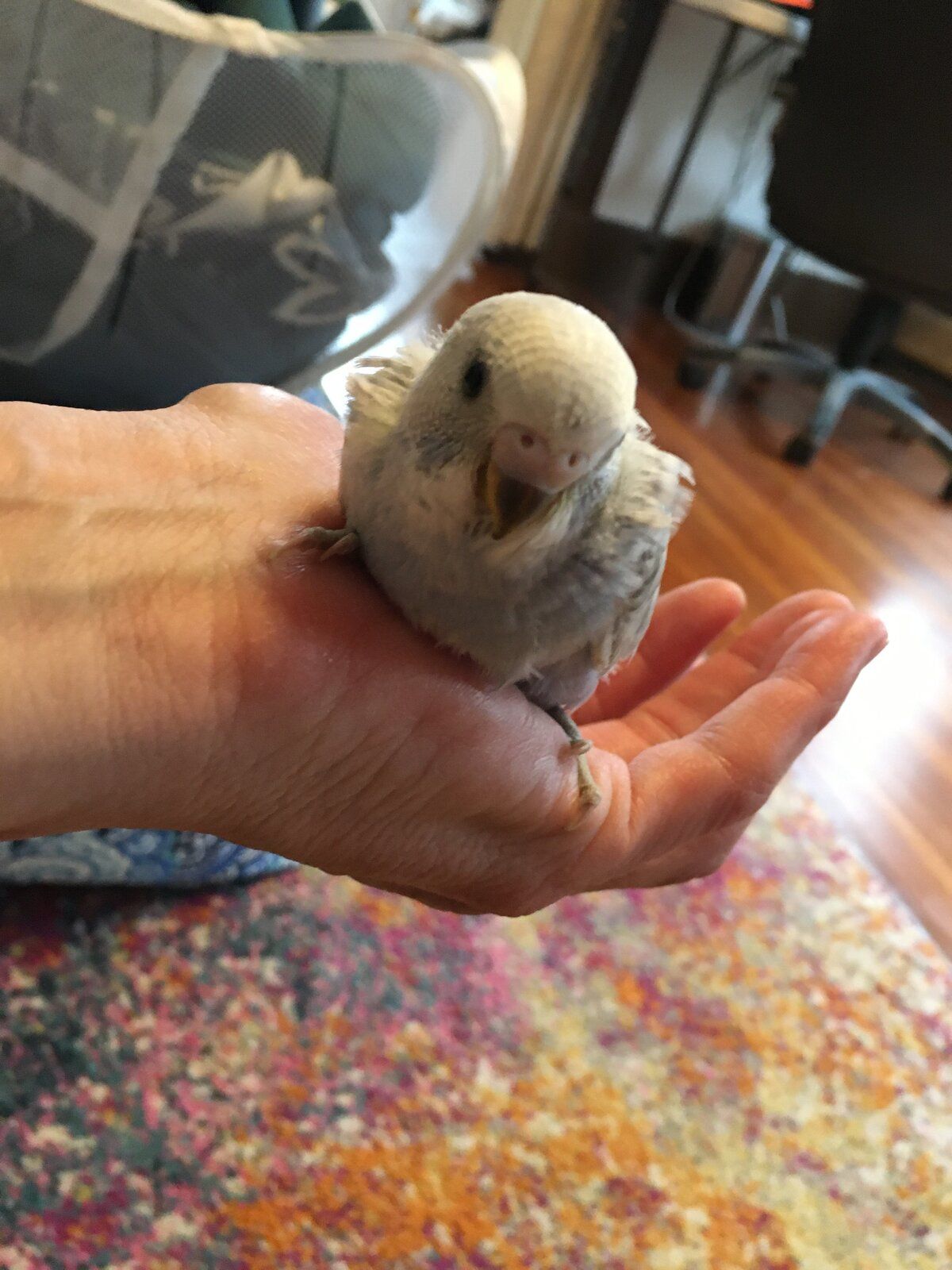 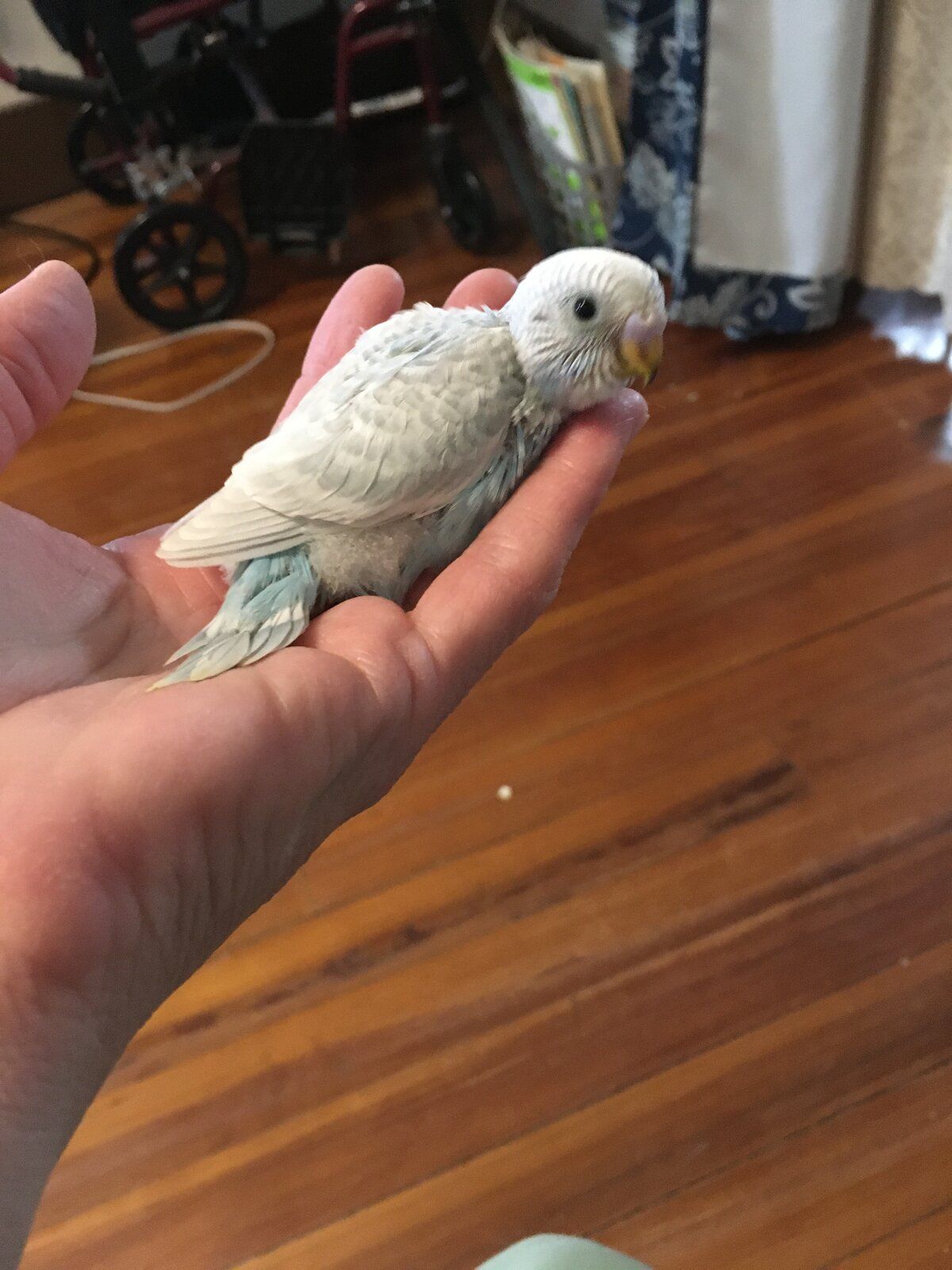 Riker seems to have inherited papa’s good looks and mama’s docile personality. Head scritches and relaxation were in order today. 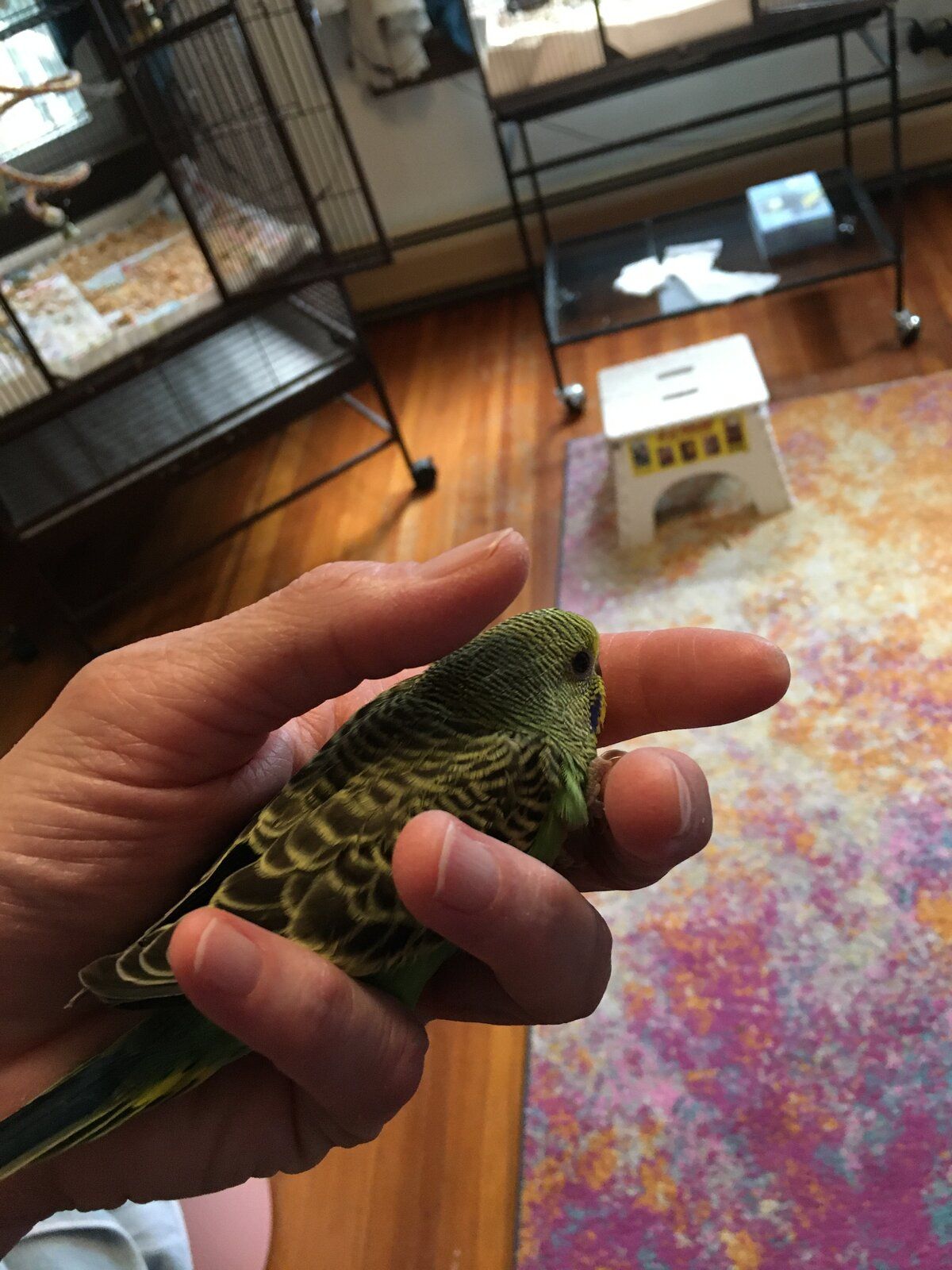 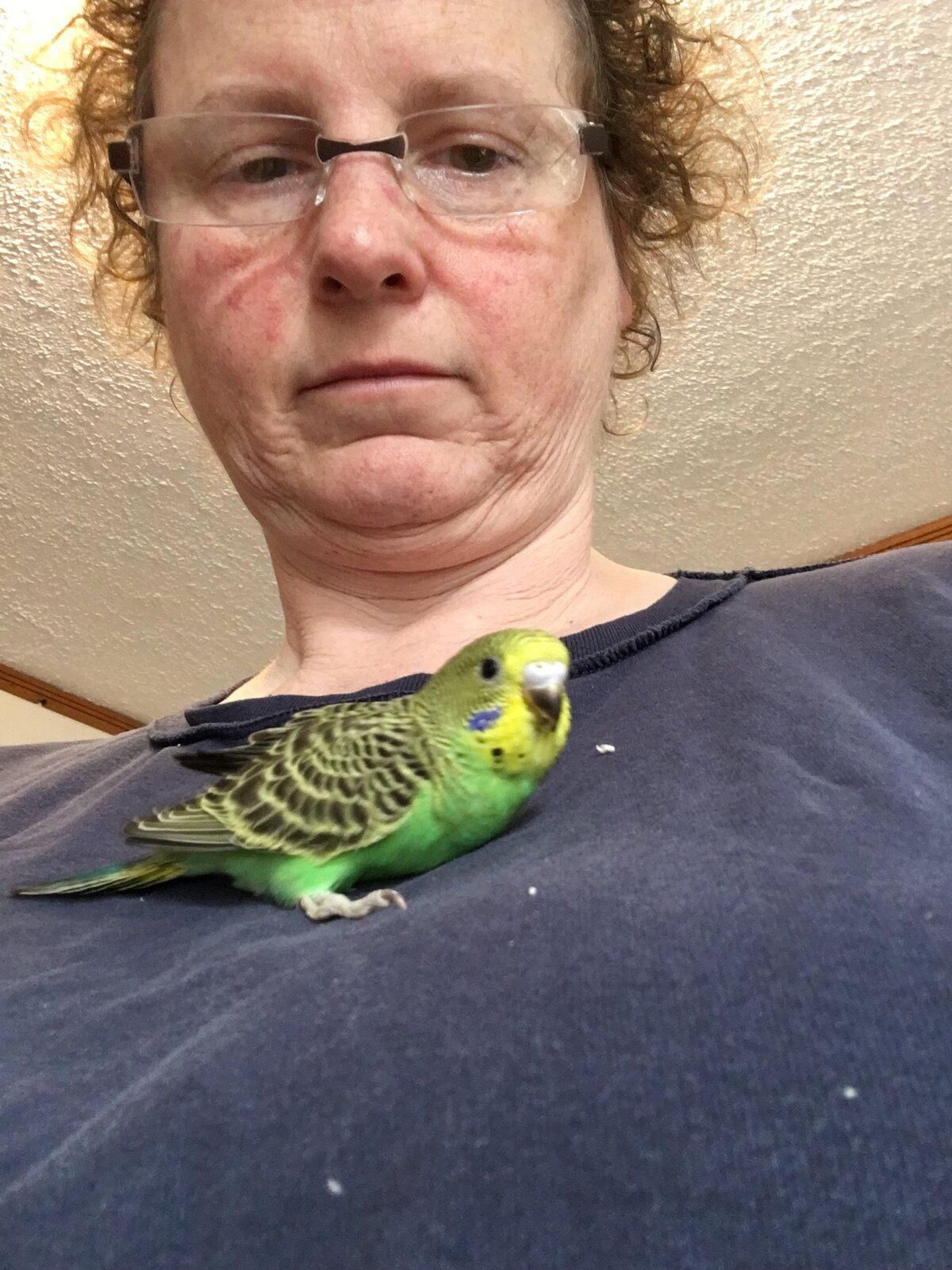 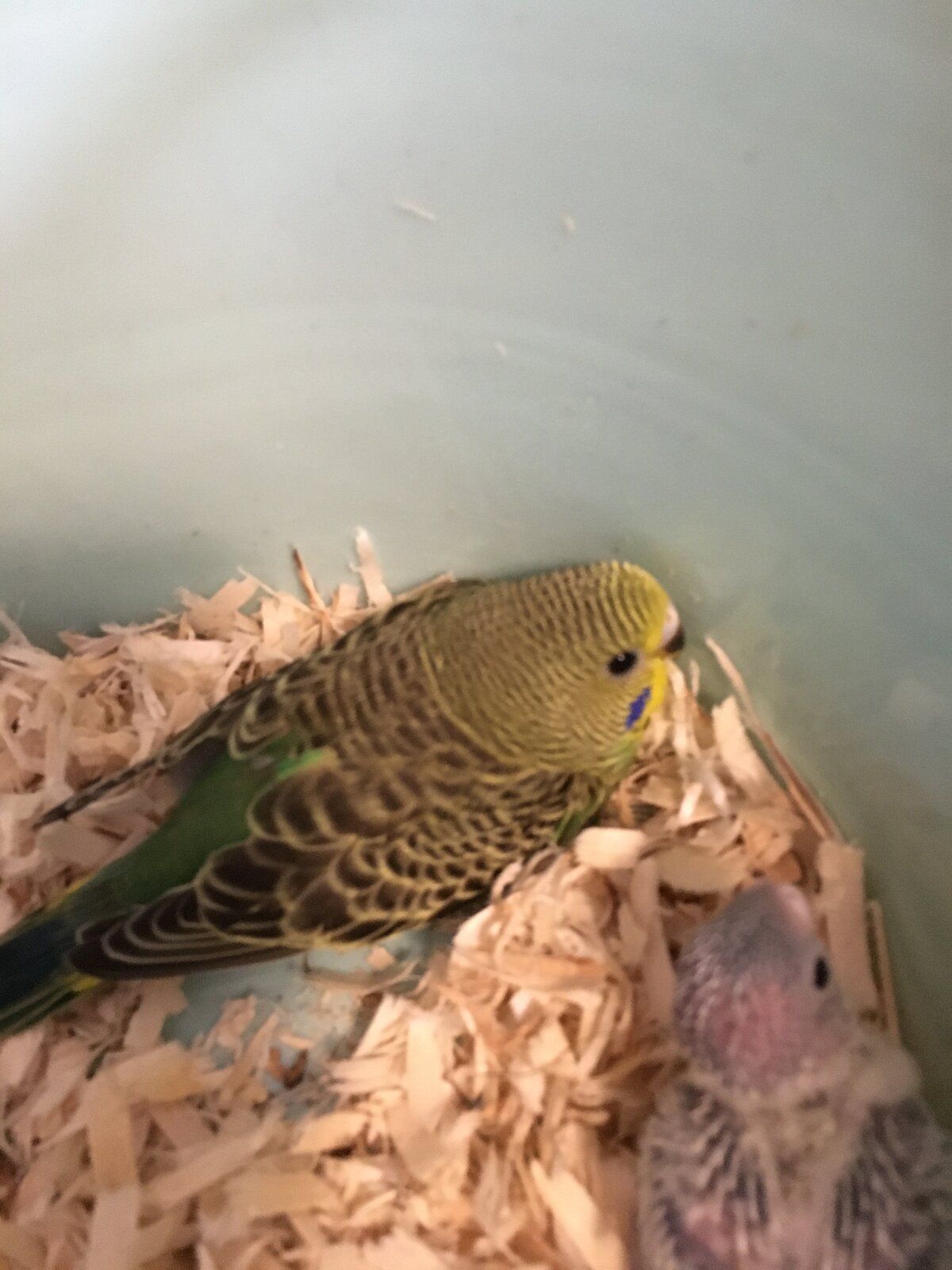 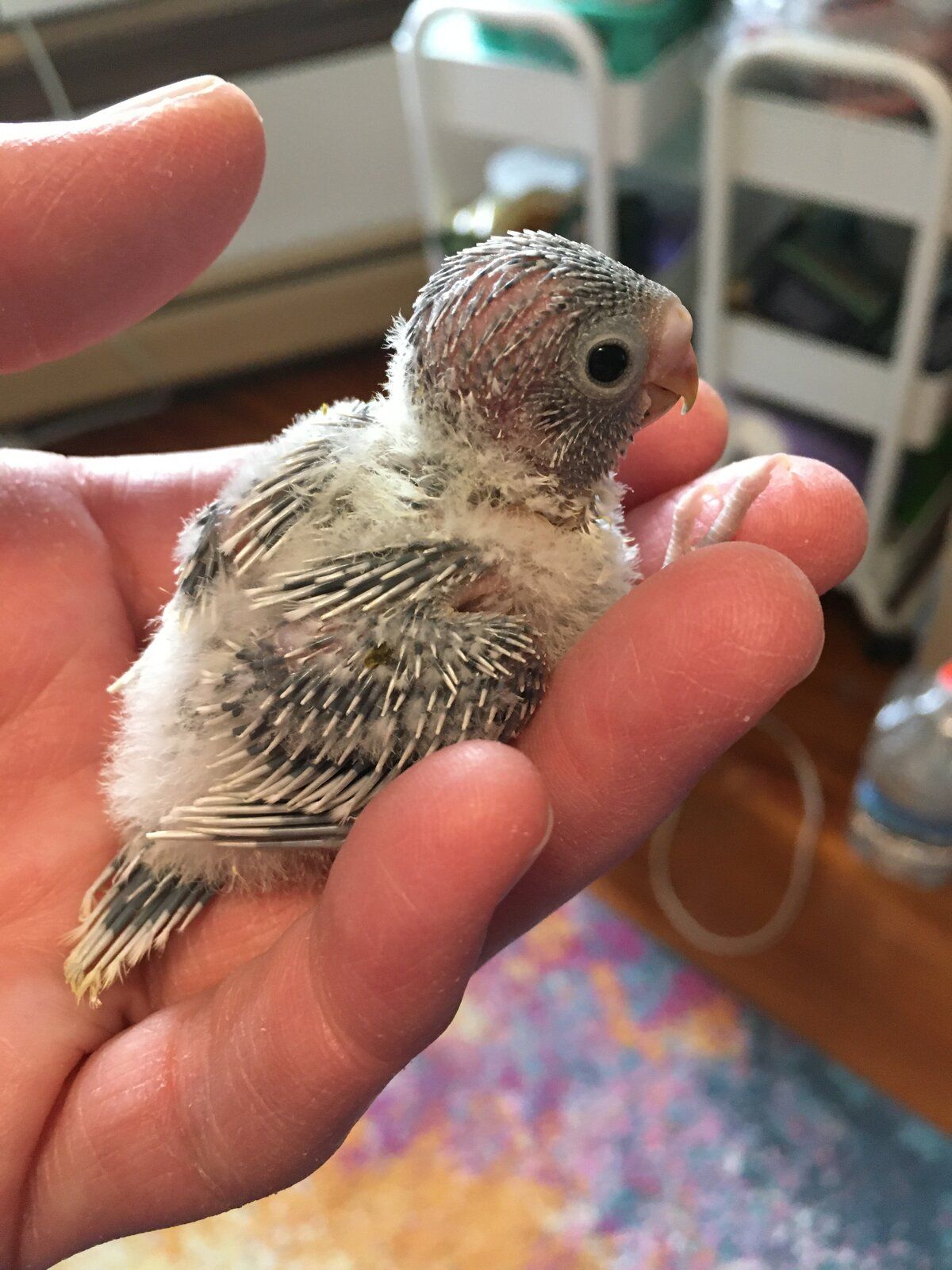 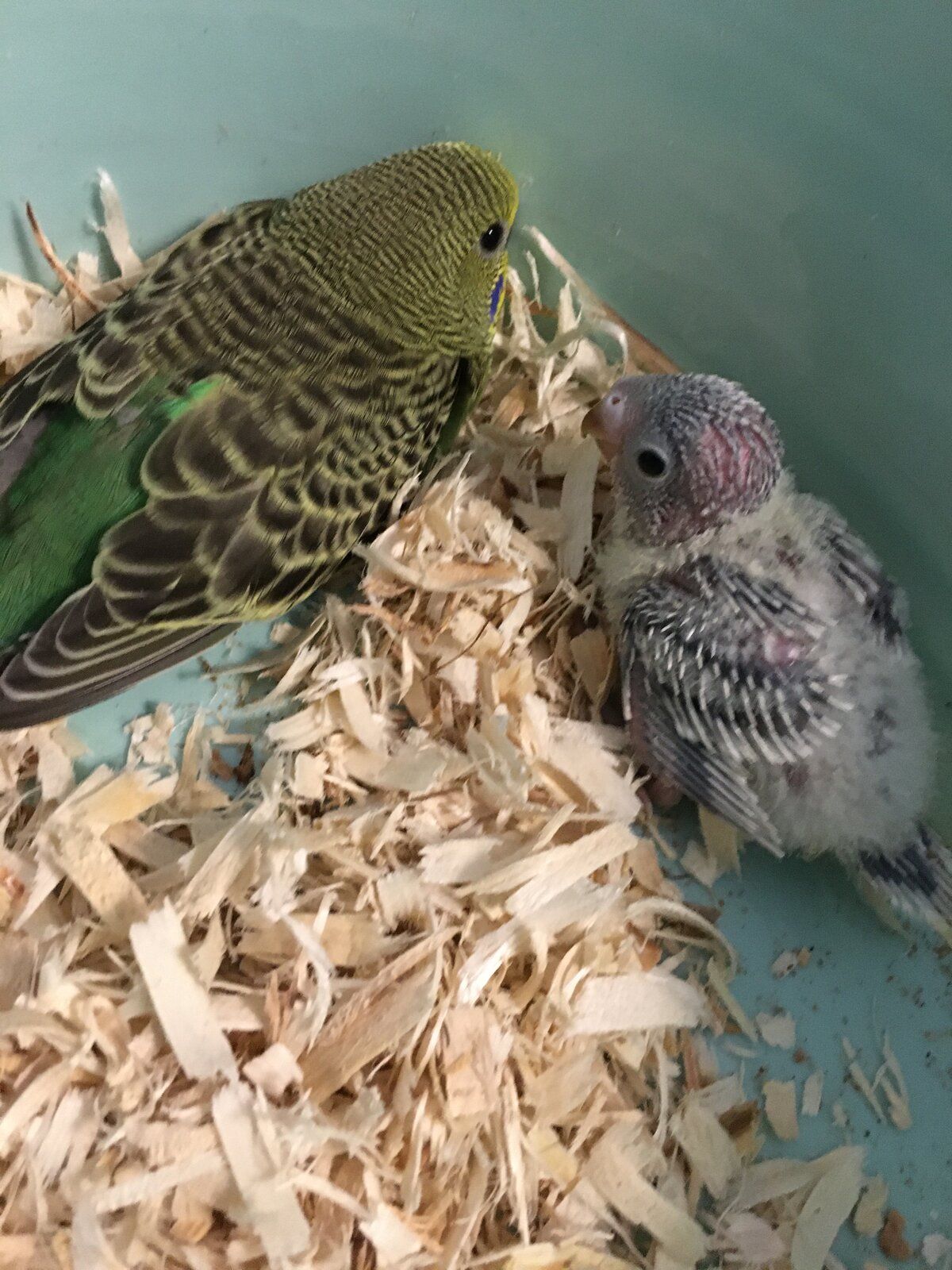 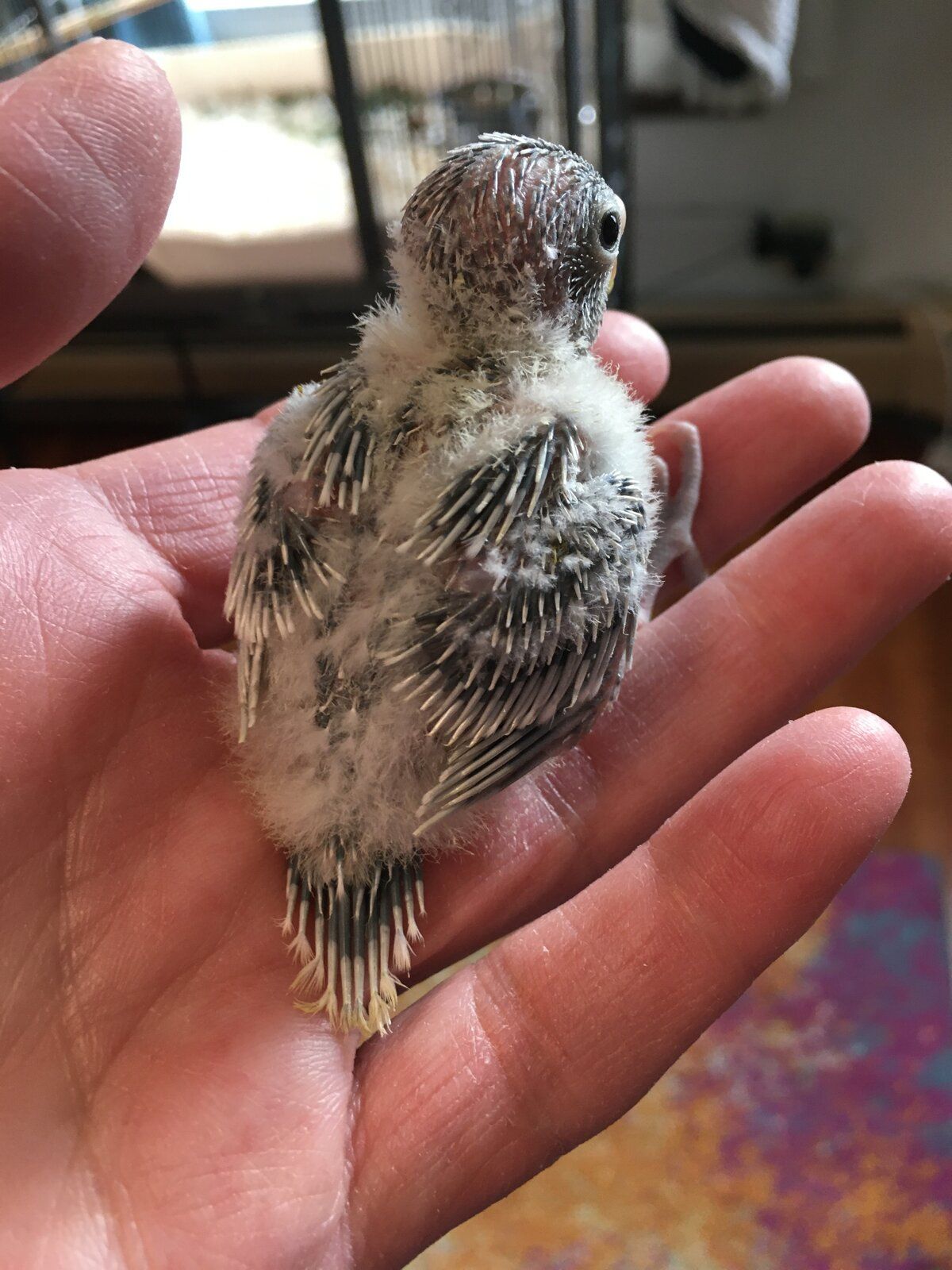 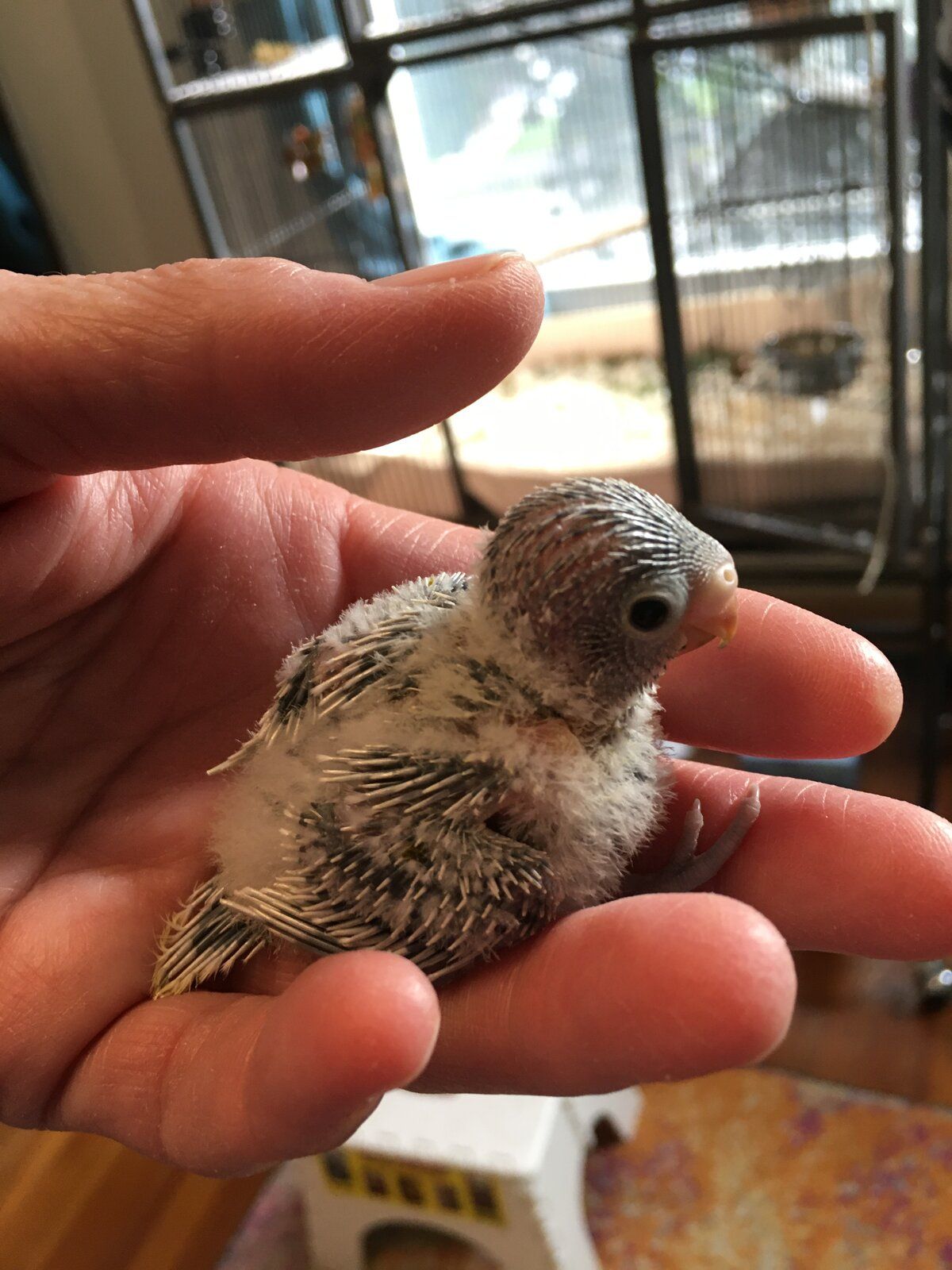 I’m Really hoping Tiny’s colors or markings will be distinct from the others when the feathers come out.
OP

Everybody back in a nice clean nestbox. 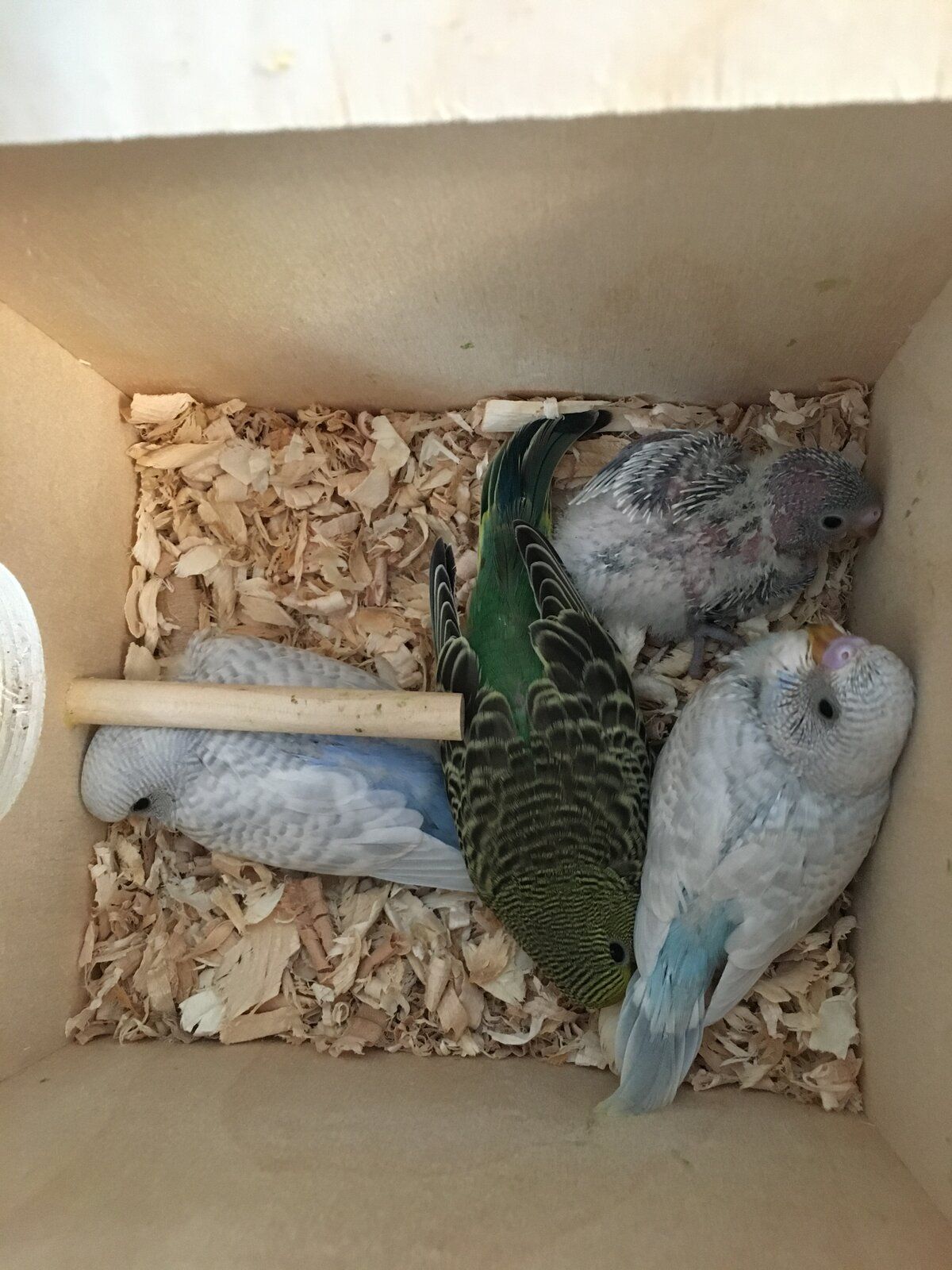 Today for first time I watched little heads poke themselves Out of nestbox. Riker first, then Patchouli. Papa stood watch to keep them from actually climbing out, until Mama came and pushed them back in. Tried to get a photo but couldn’t focus on little heads thru cage bars to nest box hole.

I am so glad to see Tiny that big, I don´t know if he is going to be different than his siblings, although he is definitely from the blue series.

it is TOO early to identify their sexes, but I have the impression, looking the nose cere that Riker and Patchouli are females and Three is a male... time will tell
OP

So yesterday I was gone several hours. (Left early am, went to beach with friend, returned early afternoon.) I closed up the room so I could leave budgie cage open, thinking previous domestic altercations have occurred when cage was closed & they could not voluntarily separate.

However, Jefferson has shown interest in the nestbox recently. Actually on Monday or Tuesday, when I had the babies out to clean nestbox, Papa Jefferson caught sight of Baby Riker. He got quite excited, tried to feed him, but got so VEry excited that it seemed a bit dangerous. AFter I put babies away in nestbox, Jefferson repeatedly attempted to enter the nestbox but was rebuffed by Mama Calliope.

So with this in mind, I left the cage open. Since putting shavings in the nestbox I've lined the budgie cagefloor with shavings as well. But when I got home yesterday, most of those cagefloor shavings had been relocated to MY floor.

I did not See any other problems. I wondered if it had been (1) mating on floor, (2) did i miss a baby's first exit from & return to box? (3) an attempt to get my attention when I wasn't here? (4) a fight? Well yesterday as mentioned I did not see any other signs of problems. It's true Jefferson was not swooping around but he is usually more energetic in the morning, and has tended to stand guard in or on the cage since the first egg appeared.

But today I got a better look. He was sitting in a beam of sunlight & I noticed some feathers ruffled. I looked closer and realized, dried blood above his cere. I don't THink it's a cut, perhaps just a feather was ripped out. But apparently they did have another altercation while I was out yesterday. ALSO, very evidently, Jefferson is Actively Hiding the evidence from me. (When he saw me looking, he angled his head away so I only saw the clean side. Musta been what he did yesterday afternoon too! When I moved for a better look, he tucked his head back under his feathers, again hiding the evidence.) This is either because he is afraid I might take him to vet. (Not gonna, at this point.) OR it's because he knows he's at risk of Separation Cage.

What I am wondering though, is, WHOM should I separate?

I've read elsewhere about removing the MAMA rather than the Papa from cage after the babies get to... some particular age? And then Papa feeds them while they wean? I am wondering if I should do that now.... OR... if due to Tiny still being a little small, should I wait? And if I remove Mama from the main cage, how do I encourage Papa to take over feeding?

(And even if now would be the right time, I do plan to observe Jefferson today. He is rather subdued today, not surprisingly, so I don't know whether he will step up for feeding, or not.)
Last edited: Aug 26, 2021
You must log in or register to reply here.

SIX budgies, a Conure, and a fiddle