This is my first entry into Parrot Forum, so a brief intro: I am intensely bonded with my Senegal parrot,
together for 16 years, sharing showers, naps, snacks, watching videos etc.... besties. 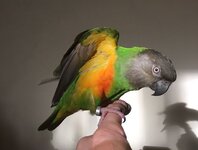 This is my urgent concern: ( a more detailed back story continues afterward )
He sustained an injury to his left wing, an elbow joint luxation, nothing broken.
After weeks of bandaging, and physical therapy, acupuncture, etc it unfortunately did not heal;
the elbow joint did not stay in place.
He never seemed in pain and continued to be his ornery perky self.
My question to all the parrot folks out there is : how can I ween him into his new life as a flightless bird?
I am committed to giving him a full and happy life, but have no idea what he understands about his recent handicap.
He still doesn't know that he can't fly. He tried a few times and failed.
It was heart wrenching to see him try to fly.
Will he eventually know that he cannot fly and instinctively adjust his outside-the-cage activities?
Is there a process / therapy to safely and gradually reorient him to a new flightless life ?
His life pre-injury was one of total freedom with an open cage to go to where and when he wished.
Seems a cruel fate to resign ourselves to limit such a formerly active and wild creature.
A friend said that he will eventually adjust... much better than I ever will !

- thank you to everyone for reading this, from Parrot Z and I


Backstory:
Recently my Senegal Parrot had 2 accidents, never had a problem previously.
first a scrape on the top of his head which his vet fixed right away, and within the same year,
he injured his left wing.
I couldn’t figure out why ! until I read an article “Is your pet ready for you to go back to work ?”
I did resume my teaching job this past year, after working from home for over 2 years.
So Parrot Z would now freak out when he realized I was leaving - flew over to my shoes and pecked at them
to keep me from putting them on ! He also grabbed my mask and played tug of war with it;
in general, going bezerk and flying around the apartment like crazy.
Not until I returned home did I notice him hiding from me on his perch.
I knew right away something was wrong - more than just pouting and being angry that I left.
I put him on top of his cage which is where he usually sits for a while until he decides he’s forgiven me for leaving,
flies over to me for scratches etc. but this time he hesitated, and when he did fly over to me, he barely made it,
uable to fly as he used to.
I freaked of course and rushed him over to the vet
( luckily there is a 24 hour avian + exotic emergency room here in NYC )

I think he will adapt in the end. Takes my Salty a week or so after he gets clipped to realize that flying is not an option.
You must log in or register to reply here.

Why has sprouting gone wrong..??

Can parakeets catch bird mites from sitting on the inside of a screened window?