My bird likes to yell "Give us a kiss!"... and then I am supposed to bob my head and kiss a nearby object while making an extra loud kissing noise. He loves this game and will keep saying it over and over, getting ever more excited while I go around bobbing and kissing things (I can't actually kiss the bird or he'll rip my lip off.)

So one day after several minutes of this, during which I'd kissed the wall, the refrigerator, a cupboard, a bottle of diet soda, my hand, a book, and various other items, I turned around in mid head-bob to find one of my neighbors outside staring at me through the window.

When we made eye contact she just kind of ducked and hurried away. I don't know how much she saw, but she must think I really, really love my house and everything in it.

When we had Perry only, one day we let him sit in the window sill to look outside the opposite side of where he usually got to see. There was a flock of female robins out that day, and boy did he get excited! He walked up to the window and raised his head way up like "Hey, ladies. You sure are lookin' good today!" Then he sang his little heart out and a few came up to the window and sang back. After a while, the robins decided it was time to move to a different spot of the yard to forage, and poor Perry started trying to climb the window to get to them. A couple came back over for a little while and then all the sudden they all took off and Perry stopped singing and was still as a statue.
And that is when this little pulpy-orange-juice looking cat poked his ears above the window. That was the first time Perry flew to me for comfort instead of his cage.

Don't know why, but Bells in love with my big toe. She'll sit and talk to my toe for a while before hopping on it and start chattering away. 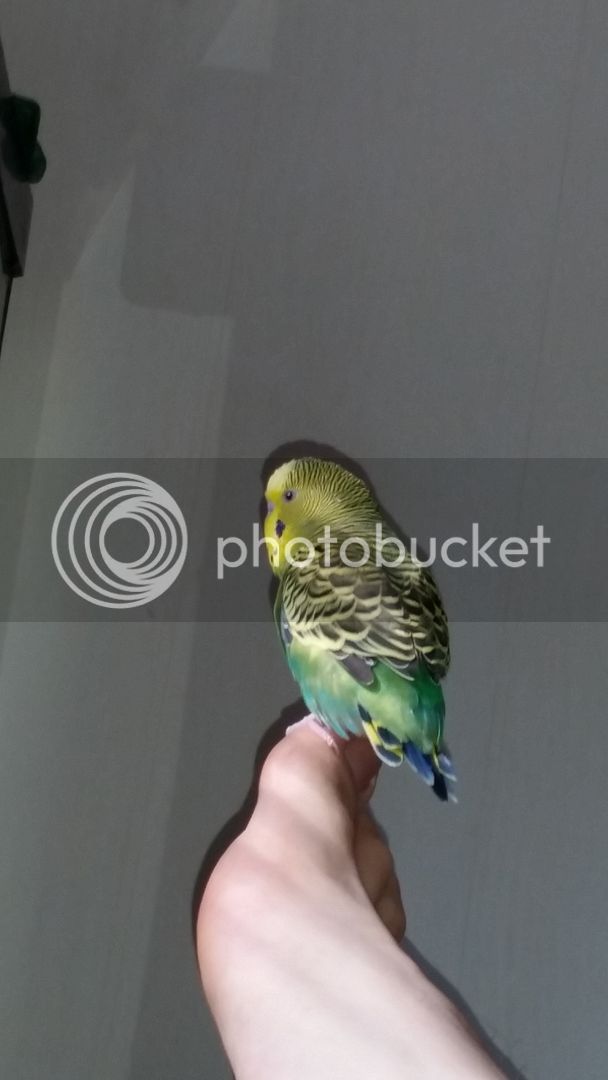 Look at my fancy hat.

Don't know why but Bell has been sitting like this lately. 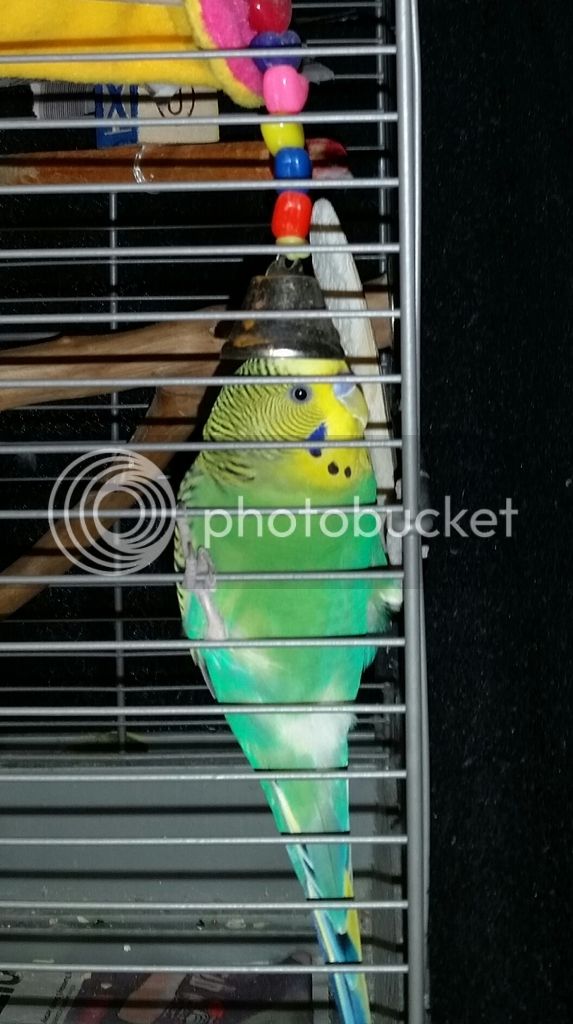 My monk parakeet always climbs up on top of my head and poops... and then he laughs.
A

Parrots
I have a Alexandrine Parrot's Chick. i dont know about my Parrot Sex.

Today my cokatiel just started to swing his head arround then he started screaming he doesnt do that normaly ,but nothing happend he started singing and dancing well that was wierd

antoinette said:
Mishka, my African Grey keeps us in stitches 24/7
When the telephone rings she shouts pick up the phone pick up the phone
hello okay bye bye
When someone knocks on the door she says knock on the door and makes the sound of someone knocking
When the dogs start barking she says doggie woof woof
When calling my son Sean, (he acts deaf) she shouts out his name SEAN, then whistles his whistling tune.
How boring would our lives be without these loving wonderful "HUMANS"
Take care
Click to expand...

I don't have anything exciting about my budgie, but my cockatiel is another story.
Elvis my cockatiel loves getting head rubs, he loves it so much that he has tried to get my knee to rub him. He even tried to get a small plastic ball hanging in his cage to rub him, and when it didn't run him, he got mad and started fighting it. He eventually took it down and tossed it out of his cage. He also learned who to open his cage door, which is how he tossed the toy out. He also managed to close the door again afterwards.

bird lover said:
i bought a baby cockertiel spected i was ging to tame him he want ment to be tame but when i got him out of the box he jumped onto my shouder lol
Click to expand...

Omg same with me and my cockatiel.


Sent from my iPod touch using Tapatalk
A

Snowball has to be the biggest little troll I know. He seems to just do things to purposely annoy Warbeak now ever since the day Warbeak went chasing Lily around the room (he’s getting training sessions now to tolerate the little ones more but Snowball is certainly making it hard).

One of the things Snowball did in the past to Warbeak (about a few months ago) is they were eating a thing of millet together peacefully. Warbeak has always hated the little ones, so this was a sight to see. I thought they were finally going to get along. But nope, Snowball had to ruin it. Warbeak bit off a piece of the millet, and Snowball decided he was disinterested in the millet left on the cage. He wanted what Warbeak had in his beak...and so he went and snatched it away. Of course this only made Warbeak angry, and he puffed up all his feathers and went threat mode on him (wings outstretched, screech, head bobbing motions, beak smacking) and chased him off the top of the cage, refusing to share any more. Any time after that if Snowball tried being friendly and getting nearer, Warbeak instantly chased him away.

Now, as of most recent incident where Warbeak went nuts and chased Lily across the room when I was cleaning, Snowball has decided “What a fun game!!” Snowball now will go to whatever stand Warbeak is on, and see how long it takes for Warbeak to chase him away. Then he comes back. Over and over and over. And now Lily of course has joined him in this game... back and forth and back and forth. Poor Warbeak is so fed up with it sometimes he just leaves them be and ignores them with a dejected expression (puffed up head feathers and that defeated look in his eye). Of course Snowball can’t stand this and will inch himself closer and closer, fly around him, waiting for Warbeak to play the game of “chase me off the stand”. Ugh. Little monster troll, I swear.

Pearl does this EXACT thing with Kermit. She flies around him and teases him until Kermit “charges” at her. They do this over and over again until one of them gets bored.
I even have a video:

Kermit has no intention of hurting Pearl, but Pearl is so persistent I’m sure it gets annoying to Kermit after a while. As you can see, Kermit just exited the situation and flew away.
Pearl is also in love with Ducky. She follows him around and sometimes lands on his back. I’ve posted a thread explaining my problems with that, and how Ducky doesn’t appreciate other birds in his space. Thankfully, that behavior is beginning to subside, and I’m able to let Ducky and Pearl out of their cages together without Ducky getting too fed up.
Last edited: Mar 30, 2018

One of my budgies, Moth (the darker blue pied one), is a real trouble maker.
Out of her and Melia she's the one who'll most likely be making a racket when I turn around.
She climbs around on the bars of the cage, on the ceiling, hanging from toys. More like a monkey than a bird, but I love her for it. She never fails to put a smile on my face.

Recently though she has taken a liking to the stainless steal bowl I put treats in occasionally. She'll stand on the wooden perch next to it, pick it up and rattle it around in the holder making a loud clattering noise. She does that for a good ten to fifteen minutes. I usually use it for jelly pots, though I recently put in some Nutri-berries (that I found in Pets at Home, the last bag on the shelf!) to see if would like them.
To her though they are much better scattered everywhere. I watched as she picked up each one and tossed it out, she just stared at me when I put them back (they didn't remain there long).
I think getting a few toys for her to pick up and toss around is much needed for her. ^^

My budgie Kona is pretty funny! She loves to eat upside down like a bat, and plays that way too. It's really funny to watch lol

At 2AM woke up to a screaming and flapping Cooks, we had a mouse visitor some how he got up into her cage.

Now Cooks does not allow me to touch her, in this panic mode i flicked the light on, opened her blanket she was stuck to the side of the cage wings open freaking out. Naturally my first reaction is to look for the object of the freak out, just to realise i am touching something really soft i look down at my hand and i my stroking Cooks. We had a two second "what the?" Moment before she jumped onto her perch and ran to the other side of the cage.
E

My budgie, Lilly, can't contain herself whenever I play music, and she definitely has some favorite songs that she sings to every time

Shortly after I got my two non-tame budgies, we were watching a YouTube factoid video, where a blazing fire came on for the background. They panicked! Well that got taken care of, but they decided that didn't like that presenter afterward. They went into a sort of "modified (fake?) panic" whenever he appeared. I didn't like their distress, so I would find something else to watch.

Well from this, my supersmart birdies learned they could veto any show they don't like. Which apparently includes any shows with drama (stressed-looking humans) or any action, or even fast cuts.

I've just cancelled Netflix. I haven't been able to watch it for months now. Netflix wanted a reason, but there was no option of "the Budgies won't let me watch it."
Last edited: Apr 20, 2019

My now elderly blue budgie, Burd, was replying to a screeching hawk. (I know, creative name, but this was sixth grade me)
A few years ago, I had my patio door open and the screen door shut tight. Burd was perched on my finger, content where he was. He's never been a loud or exuberant bird. He only ever gets loud when he's singing with his flock. Well, as the summer night was drawing to a close and the sun began to set, I heard this familiar screech from within the neighborhood.
I live in Minnesota. It's guaranteed that you will see a red-tailed hawk or an eagle.
I couldn't find the hawk who was doing a contact call, but Burd heard it and immediately replied. I promise you, this little tiny budgie had a five-minute back and forth with the hawk. I never saw the hawk and neither did Burd. I often wonder what those two were talking about.

On a side note, if Burd is singing up a storm with Pidgey, my GCC will scream in response. Callum does not like my budgies, except for when Burd reaches those pinfeathers that my fat fingers can't pop open. That's the only time Callum tolerates Burd.
You must log in or register to reply here.

Some People Just Don’t Get It!