I really miss my conures

I posted back in October of how I was afraid I had to rehome my two conures, and was just asking for advice. I didn't have the heart to reply back to everyone who messaged/interacted with the thread, but I'm very grateful and definitely took everything said into account.

I really tried my best not to rehome them, but in the end I guess it was just inevitable. I ended up rehoming my birds early January.

It got really really hard balancing everything. I had started a part-time job and was going to school full time, days where I was home my sister would go home and leave both the cat and birds with me. My parents were not cooperative, and my sister just kept pushing most of the birds responsibilities on me. I think I was being selfish but I
did not want to give my birds away, so I really tried my best. But by the end I was so exhausted and the birds were not happy, they started being in their cage more, I wasn't able to give them as much attention as they need, the cat would get locked up, school was stressful, my part-time job was emotionally draining, and no one seemed to be cooperating. I know we all know that as great as conures are, they require attention and are very high-maintenance. Your life essentially revolves around them.

I realized I was just being selfish and decided I should rehome them, because It wasn't fair that I was just holding on to them because I love them but they were't getting the attention they deserve anymore. I began looking for a new home and found one after around a month of searching. I asked all the essential questions, they had previous experience with conures, they had the space and time and seemed very loving. So we gave them away to their new home. I'm really glad both birds were bonded to each other instead of us, I think that will make the transition easier.

It was really hard the first week, I pretty much cried myself to sleep lol, I would start crying when I looked at where their cage used to be, I got really sad when I was downstairs alone because they were not there with me anymore. I didn't have two little gravally voices saying "hi baby" or whistling or chirping anymore, It was so weird how silent it was.

I think I mentioned this in my other post but my sister and mom were gone for the past year and it was pretty much just me and the birds (and my dad). We spent all day together, we'd have meals together, they would be with me during my classes (classes were online) and when I was studying. We chilled together all the time, after I was done for the day. I really owe them that whole year, I got through it because of them, and I wasn't lonely because of them. I get really sad sometimes but because I had them, I still got out of bed, and I could spend time with them. Conures always make you laugh and smiles, and they always took naps one me. The years before that it was primarily my sister who took care of them (didn't have the cat then) but I was still very much involved in their lives and loved spending time with them.

I got really sad today because snapchat memories keep bringing them up. I just wanted to post this somewhere who would understand how much of a difference such small creatures can make in your life and I guess for some sort of closure. When giving them away they said we can contact them for updates (they gave an initial update soon after saying the birds were doing well and were happy), and I contacted them recently, but they're not responding that really bummed me out but they really have no obligation to keep me updated so I guess I have to come to terms with that too. I just hope rio (greencheek) and olive (cinnamon) live really great lives and I'm just so sorry I couldn't keep them. I've also realized as much as I love conures, I don't think I'll ever have the heart to keep any ever again, because they won't be rio and olive.

I've added some pictures and videos of them, just to share how great they are.

Thank's everyone for how helpful everyone's been, guess i'll be taking a break from this forum as well, stay safe 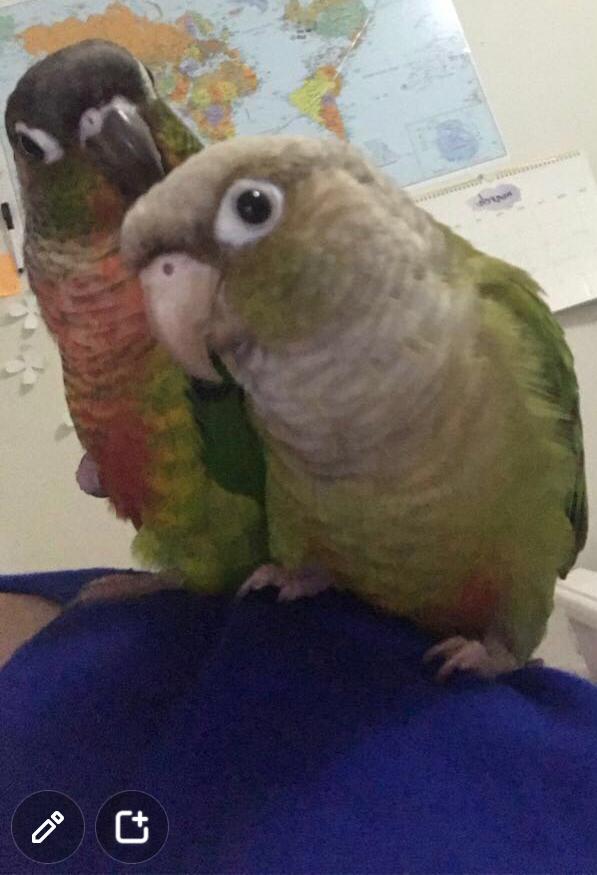 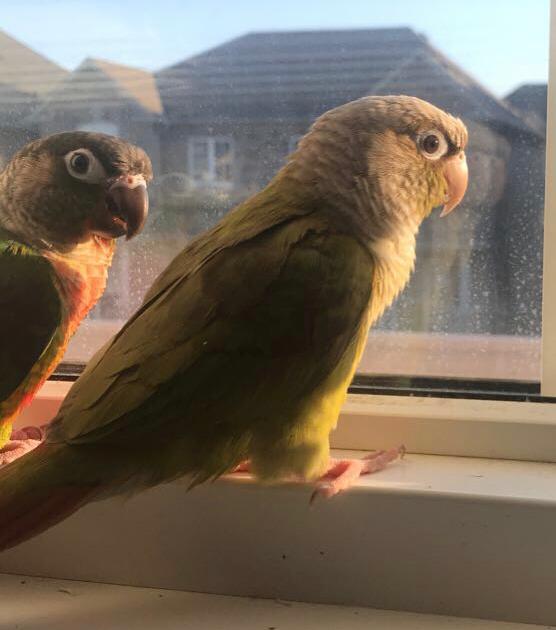 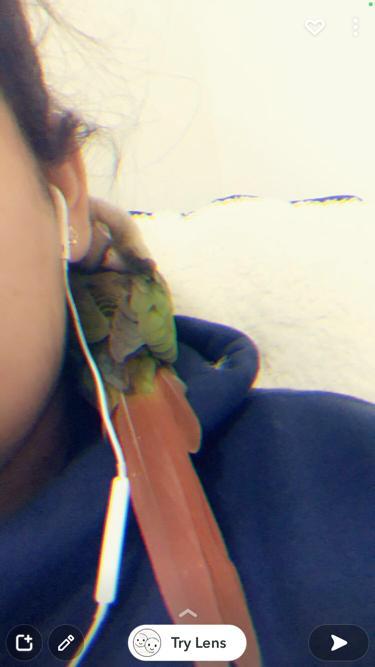 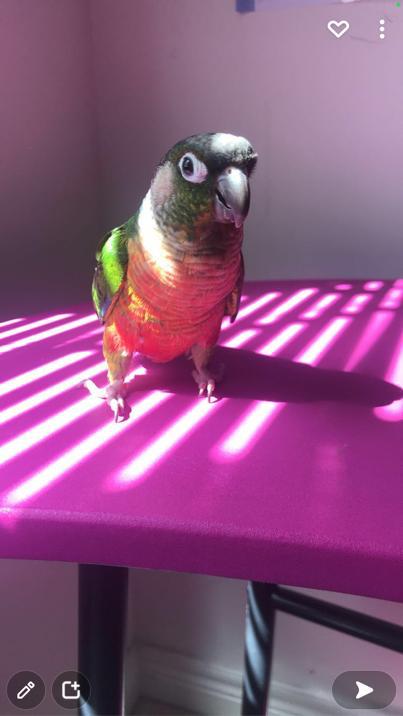 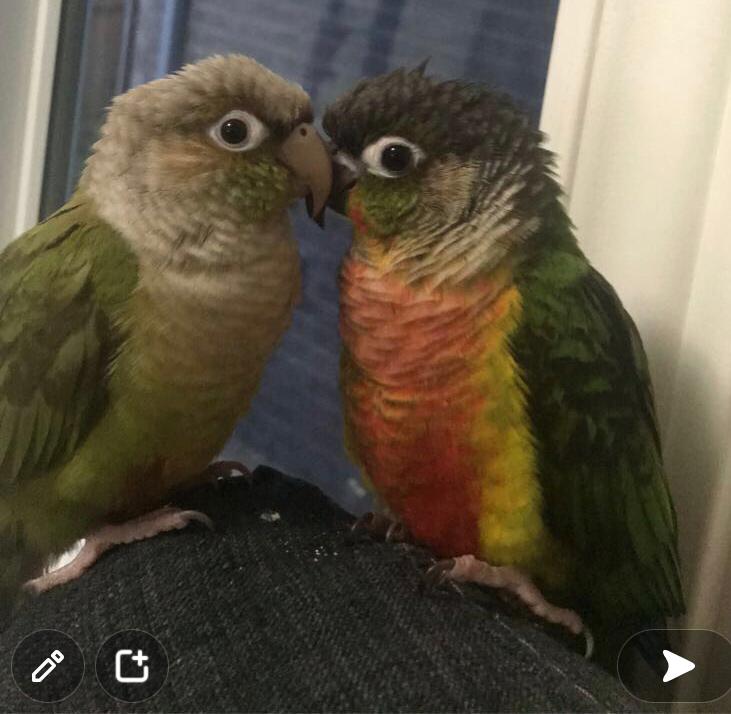 This is a very touching post and I’m glad you were able to open up about rehoming your birds when it was really needed. You’re right. It will give you closure and make you feel a little bit better about the whole thing knowing that you get to get some things off your chest all while we as a kind bird community await you with open arms ready to hear anything you have in your mind about the whole thing. Rehoming is not always a bad thing if that’s what you wonder. It’s a good thing in this case because you took your birds feelings and experiences into account and acted accordingly based on how THEY were feeling. That’s very selfless and it takes a lot for someone to admit that and take the right steps to actively yearn for nothing but the best for your birds. It’s also really good that you screened potential adopters and that you were very careful with who gets your birds. Nothing in this whole rehoming process went wrong from the looks of it. You did the right thing from the beginning to end. Your heart may feel empty yes and you will miss them because you were connected to them and love them dearly. But at least you know that your conures are in good hands, living a very good life even if it is not in your home, and getting the attention they need. That’s all anybody can ask for. So keep your head up and one day the pain will go away and all you’ll be left with are the sweet memories of your fids. Hope to hear from you when you feel better!

Thank you for being responsible and making the right choice for them. You seem like a great person. I’m sorry, I know it hurts

I agree with everyone above. You committed a selfless act by placing their welfare above everything you were feeling.
My heart goes out to you, I know that it wasn't easy, and those memories that pop up can really hurt.
Thank you for sharing your story, we do understand and you are welcome here anytime you want to talk.

i think sharing helps. I hope it helps you, big hugs.

Just because this wasn't the right time doesn't mean you should punish yourself by never having parrots again. When you have your own place and a steady life, it might feel right again.

Years ago I had gotten a tiny puppy. 2 days later half the people I worked with were laid off. The rest of us were told the company had sold and we would like be let go after the transition. I was freaked out that I wouldn't be able to pay fir all his puppy shots and getting him neutered. So I found an amazing older couple who had been searching for a tiny toy breed. And rehomed him to them. It was pretty hard to give up a tiny 2 pound cute sweet puppy, but like you , I wanted to do right by him.
I did get to follow up twice, and absolutely he was ment to be theirs !!

Later on I found a puppy with a lot of behavior problems and seizure issues. I had the right skills to help him. He was the one ment for me!! I still have him , my Alfie , he turned into an amazing dog. Even though at the time everyone thought I was nuts to take him on.

So please don't write your future off. Don't hate yourself for doing the right thing! It shows a huge depth of character and compassion . To cause yourself heart ache and pain to be sure they never did .
You must log in or register to reply here.

What's going on with these feathers?

Guilt over cage time & considering getting a second conure

S
Why is one of my gc conures so scared of me?

E
I may need to rehome my Sun Conure, I feel hopeless and desperate.