so yesterday morning, I found Blue Boy in a fluffed puddle down on his stomach . Loose stool around him. Pretty much un responsive ..I was able to walk over and pick him up. He is not tame , and normally would fly away.

I set up a hospital Cage for him, put my sweeter heater radiant heat panel on him. I mixed up 1 ml of baby burd formula, and fed him 1/2ml of formula. I wrapped him in a wash cloth and gentle put a drop in his beak. He swallowed, then he actively took the rest like he wanted it. He couldn't perch. So I out him back inside a food bowl with millet , and crumbled nutriberries . It was perfect to support him, and have food at hand.

I called vet did a consult. She called azithromycin in to the pharmacy. I got it . I mixed it in a 0.25ml of baby burd formula and gave by syringe.

Towards afternoon he was able to hock sit in bowl , that's better than flat out. But by evening he was on the bottom of cage on the towel. As I had heat on him, food and meds in him, I left him alone on bottom of cage instead of stressing him to luyt back in bowl ...didn't know how much stress he could take....

This morning I un covered him expecting the worst. But tho he was still on the bottom of the cage he was standing!!! And for tge first time alert to my presence. After about 20 min he jumped to a perch!! He isn't fluffed! He is eating on his own right niw!!!!

Whew! I couldn't talk about it yesterday, I was to scared I would loose him. But I'm feeling extremely hopeful today!!!!

I had weighed him , so vet could get meds right. He had not lost any weight, he was 41 grams . So msybe he got chilled, or this hit him fast. It was a cold night, I had home at 71, I had the heat panel In front of cages...but maybe to much chill by windows.

My vet is comfortable with azithromycin, it's a very fast action antibiotic! She is always trying to get other avian vets to use it. It definitely saved Blue Boy! I really didn't think he could be saved. But heat, and having baby burd food on hand certainly helped. As always I urge everyone to have a scale, to have a radiant heat source abd baby burd formula on hand, and to contact avian vet immediately you don't have much time with a bird thst has any symptoms like fluffed

Yesterday after meds and baby formula 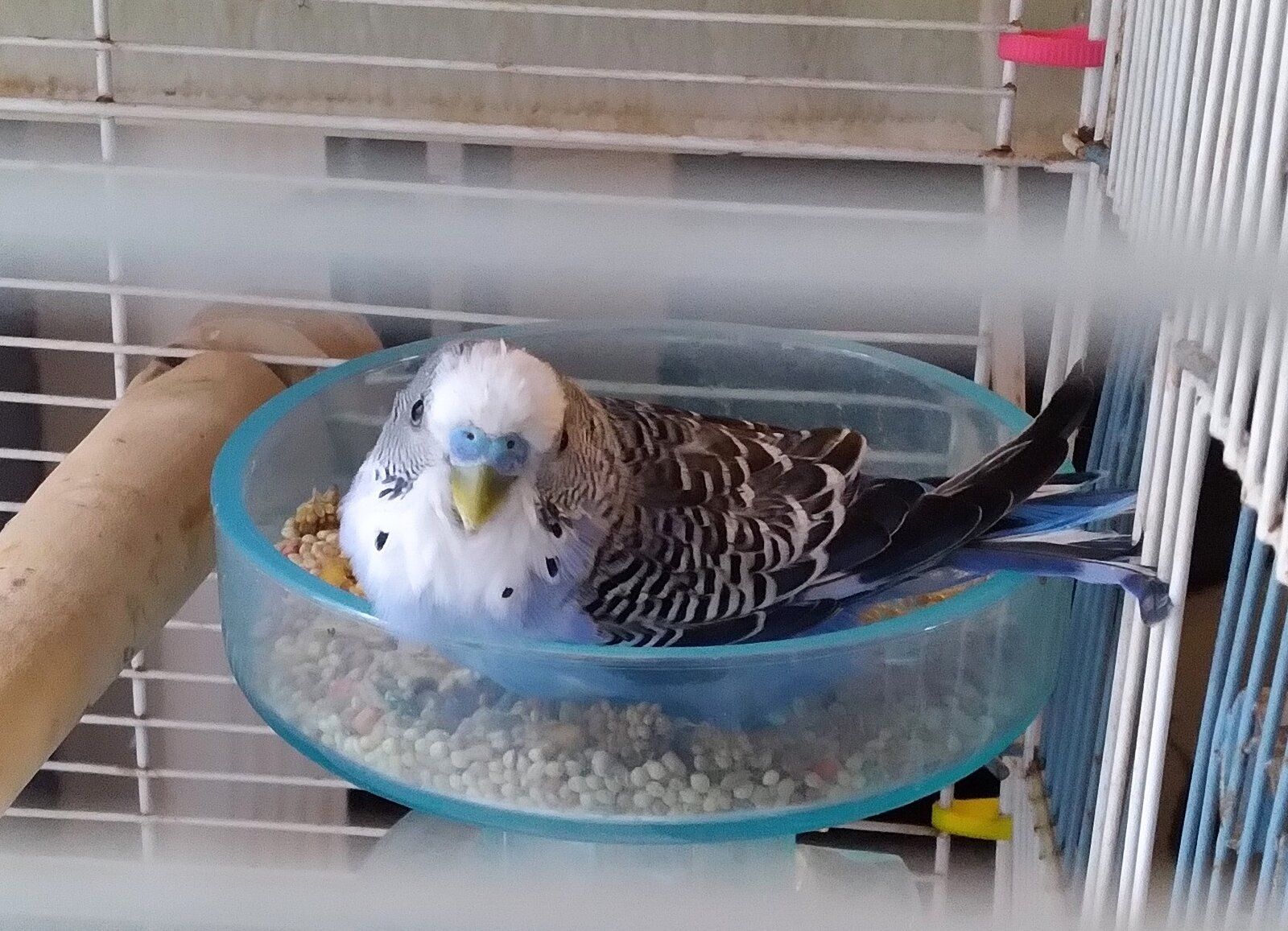 Today! Eating on his own! Thsts some boiled egg i offered him 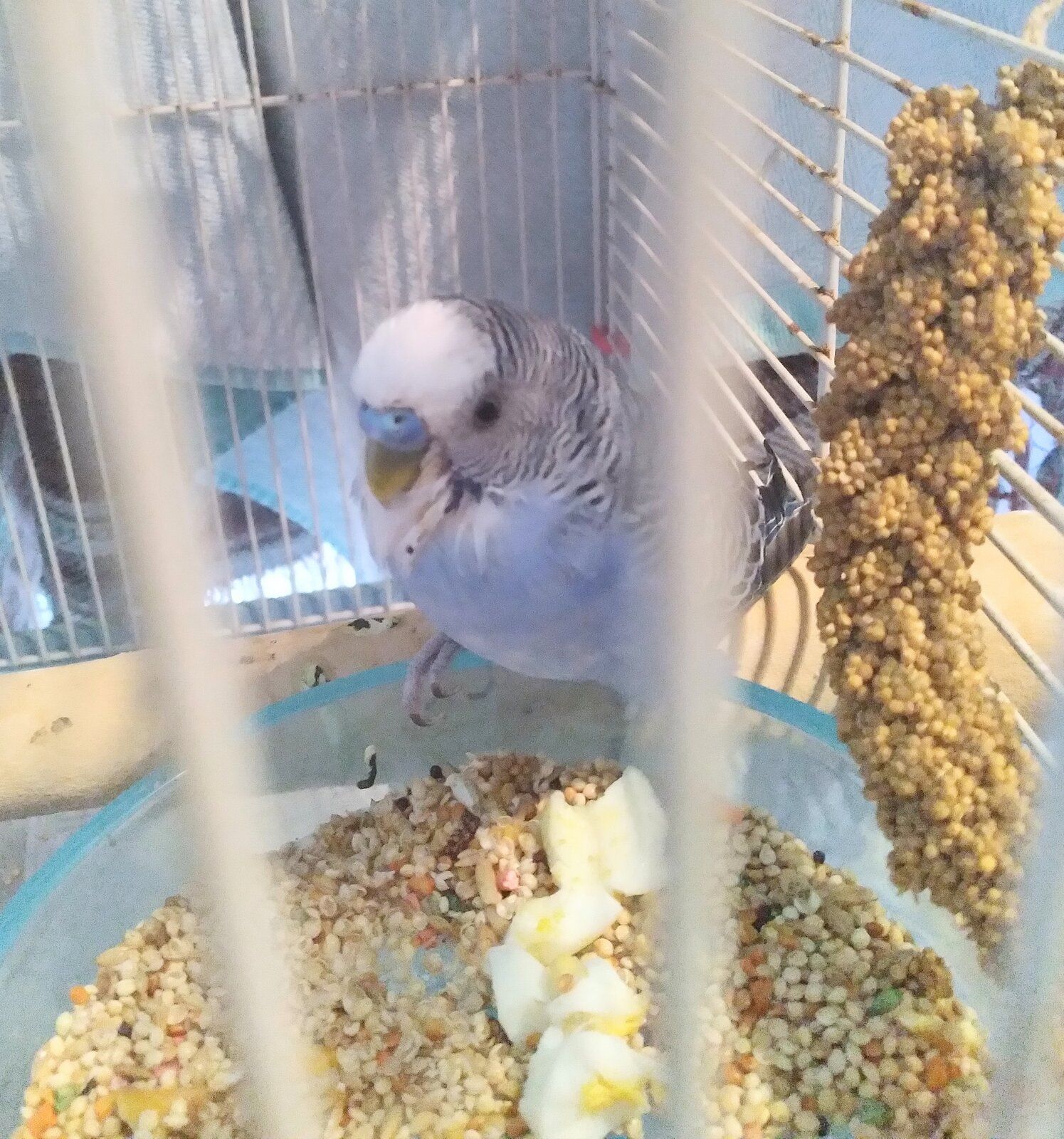 OMG
He is chirping and calling back to the other budgies!!!!

Love your skill-set and your quick action!!
Congratulations on your fast actions!
May your actions be a wake-up call to all of us just how quickly they can go downhill.
OP

Thank you.
I try and share details, in the hopes they help others, and I practice what I preach

Warmth, support food, and quick medical care save lives. Burds hide being sick until they can't. Weight checks are one if our few tools, and have played a huge roll for me . This time it didn't, as it happened quickly. But it is still one if our most important tools.

My vet checked in, she told me you have less than 24 hours to save a downed bird, ( fluffed. Not perching), and that azithromycin works that fast!

Blue Boy is flitting around his cage, unbelievable! Active, eating, exploring. So happy!

I can only imagine what you were going through. I had so much anxiety just reading your post. I am so glad Blue boy is doing better! Do you think he has an underlying ailment?
OP

Another great save Laura! Hope Blue Boy continues to improve with full recovery.

You did GREAT. I was so afraid the post would have a different ending! And all because you were prepared, you had all the emergency/first aid supplies on hand and contacted the vet right away. What a good example to set for us all.

Sometimes batches of seed or pellets can be contaminated after they leave the manufacturer. Some warehouses use poison to control pests and vermin, and these can make their way into the foods, as can molds, mildew, fungus etc. from humid conditions. Can’t hurt to check packages for recalls…pet food recalls do happen. But mostly that’s not in our power to know, we just have to buy from trusted suppliers and trust the nose and other senses if something doesn’t look right.
OP

Thank you all
Today was second dose azithromycin as it's given every other day.
He was a little less active this morning, eating less. Meds given before lunch and around 3 perked up again. Chowing right now.
Stools completely normal now yippee!!. Clear Skies my budgie you don't hear as much about went and sat on his cage for a visit , several times, Clearly wanted his buddy out of the hospital cage.
Just now, was eating millet spray before I spooked him. After pic back to chowing 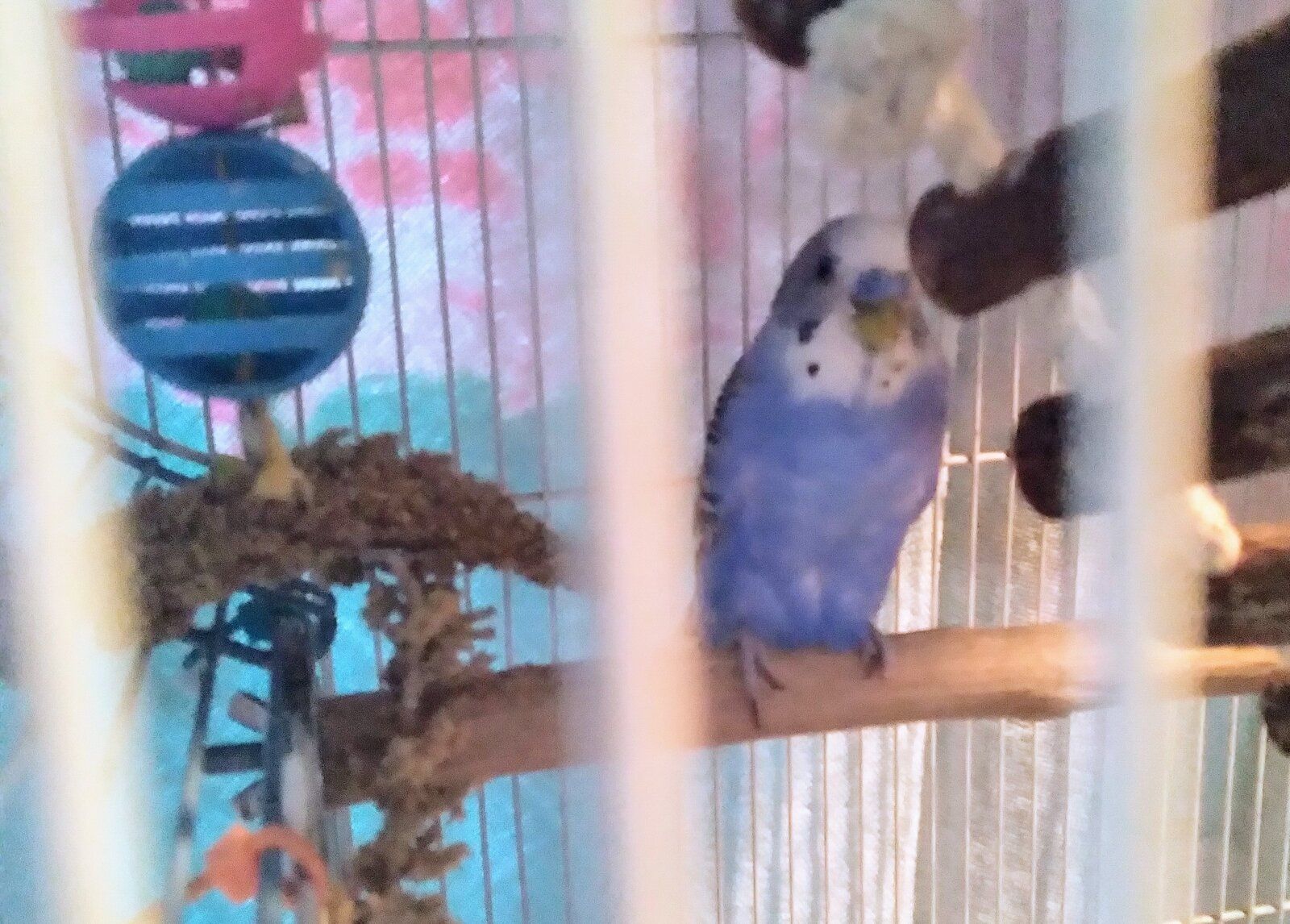 This is my radiant heat panel, called sweater heater. I've used 20 years. I do have to set back from cage a foot or so

SWEETER HEATER Infrared Heater . You can order from Amazon, smallest size is way more than enough

Forever in my heart. Sunny the Corella

thank you, I think everyone would react quickly to a downed fluffed bird . Its just good I had heat source, and baby bird formula on hand, and a fantastic CAV. After having a sick flock, and the months that took to heal them , I keep baby formula on hand st all times.

Frankly I didn't expect him to recover!! I'm thrilled with the fast action of azithromycin, and that it was a treatable infection!!!!!

That Blue Boy is a fighter for sure!!@ survived half starved outside, survived cat attack, taken from cats mouth to my home. I wish he hadn't made all of my burds sick....but we all survived and hopefully that thread helps others, and now maybe this thread will as well. Help people be prepared, help people act fast, help people have hope that their burd can be saved. And for more vets to use azithromycin , as most haven't felt comfortable using it. Truly a fantastic antibiotic for birds.

Hannah, and everyone
I should add just to be safe, I started my whole flock back on doxycline the day Blue Boy got sick, my vet is having me do thst for 10 days, unless some other bird develops symptoms
Last edited: Dec 1, 2021
OP

While Blue Boy was still in hospital cage, while I made sure he didn't relapse. He became spooked by his freind flying off his cage. He banged himself up in his cage. He ended up with a traumatic brain injury. This left him blind, with vertigo and seizure.

But he was a fighter! I worked with my veterinarian. I worked to help save him and give him time to recover. For over a month and a half. He learned how to navigate the cage blind, his budgies freinds visited him faithfully every day.

His seizures became more frequent......my veterinarian and I discussed if it was time to let him go. He had past the point that improvements were unlikely......but it was so hard to make that final decision,


Blue Boy has been an amazing fighter. He was someone's burd who had escaped...I was notified and tried to capture him. He had been seen in the lamb for over a week , survived a big tropical rainstorm. And while I was there trying to lure him in. He was caught by a cat, the lady took him out of the cats mouth abd called me I was just next door so I got him in seconds. We treated his wounds in sight and I git him veterinarian care abd antibiotics within a half hour. He was given less than 1% chance to live. But we saved him.

His previous owners were never found so I kept him . He and my other budgies became great freinds. He learned to love peas, and other veggie.

He had recovered from his recent illness. He had survived over a month from his traumatic brain injury.....I just couldn't give up on him...

His friends never left his cage yesterday and sang and sang to him. They knew. It makes me cry more, because I witnessed such sweet dedication .

Blue Boy was such a warrior, I'm so sorry that this is how his story ended. 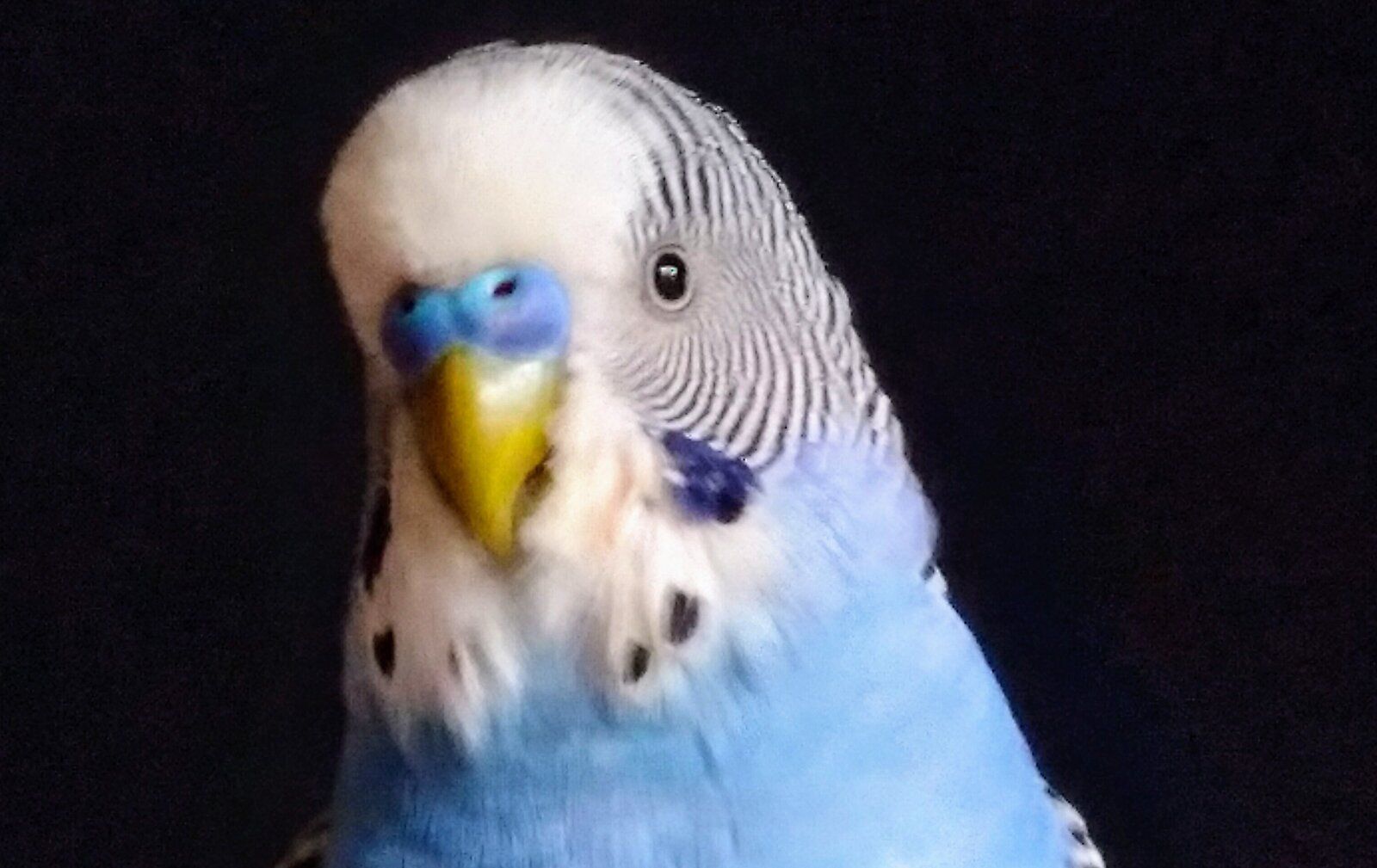 Oh Laura, I'm so sorry. You did everything humanly possible for Blue Boy. He was indeed a fighter. In the end, the best we can ask is for them to have a forever home where they know they are so dearly loved. You did that and more for him. Fly free, sweet little one.
D

I am so sorry for your loss. He was an amazing fighter, against all those odds. And you, Ms. Laura, are an amazing Mama. I admire your dedication and so does Blue Boy, across the Rainbow Bridge.

Oh no Laura, I’m so sorry to hear this very sad news today, I’m heartbroken for you. Blue Boy was indeed a true warrior, I’m so sorry that he lost his battle to stay with you. You were a hero to him, fighting for him as hard as you did, and you gave him the cherished and treasured life that every little birdie deserves. I hope you can take some comfort in that now. Nobody could have done more for him or loved him more than you. Sending the warmest of feathered hugs to you, my friend, I’m truly sorry for your loss. ❤️

Godspeed to the Rainbow Bridge, brave little Warrior, until we all meet again 🙏

Now in the beautiful Midwest!

Blue Boy was an amazing little warrior - and you are an amazing parront. He couldn’t have asked for a better home.
OP

Thank you everyone for your support.

A few panicked flaps in the cage equalling head trauma.... after all he had been through and survived

Laurasea said:
Thank you everyone for your support.

A few panicked flaps in the cage equalling head trauma.... after all he had been through and survived
Click to expand...

No, my friend. "Fair" is the one thing that it most certainly is not 💔
OP

LaManuka said:
No, my friend. "Fair" is the one thing that it most certainly is not 💔
Click to expand...

How huge your heart must be to offer me comfort while suffering fresh grief yourself. You are an angel 😇 💛 💖

It is definitely not fair.. two sides of the globe in tears.

Every moment, of every life is so precious , we must pack in as much love as possible
You must log in or register to reply here.